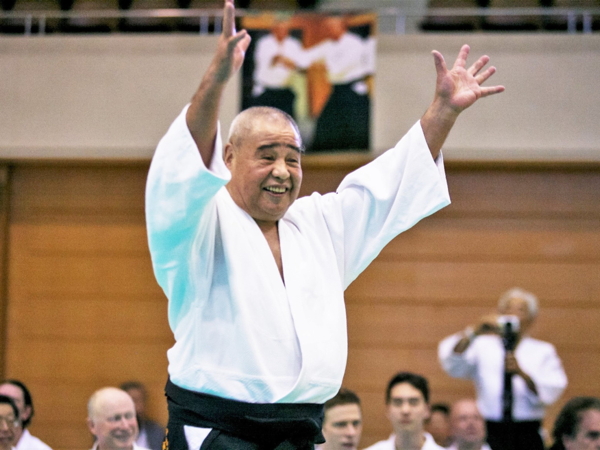 Yasuo Kobayashi was born in Tokyo in 1936 and started training in Judo in his fifth year of elementary school. He enrolled at Aikido Hombu Dojo in 1954, the same year that he entered Meiji University, becoming one of the early post-war students of Aikido Founder Morihei Ueshiba. Now an eighth dan, he is the head of Aikido Kobayashi Dojo, which has more than 120 affiliated dojo around the world.

Aikido Journal editor Stanley Pranin called him a “man of honor” – when put under pressure to withdraw from Aikido Journal’s 1st Friendship Demonstration in 1985 he simply said “I promised to attend and therefore I will do so.”. His refusal to succumb to outside pressure was the leverage that allowed that demonstration to proceed successfully.

The current interview is the first part of a two part interview with Kobayashi Sensei that originally appeared in the May 2005 issue of Gekkan Hiden (月刊秘伝 / “Secret Teachings Monthly”), a well known martial arts magazine in Japan. 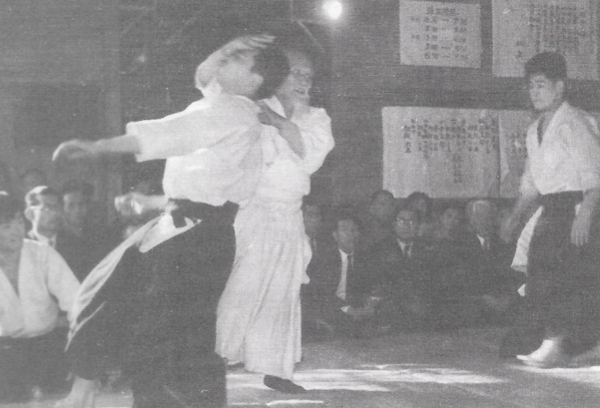 From Judo to Aikido

Q: What motivated you to begin Aikido?

A: I had practiced Judo from the time that I was a child. When I entered high school I was friends with the son of Tomoaki Danzaki (檀崎 友彰) Sensei from the Iaido Renmei and he invited me – “There’s a kind of Budo called Aikido, don’t you want to go see it?”. So we went to Hombu Dojo and for the first time I actually saw Aikido with my own eyes. That was the fall of my third year in high school. That was the height of Rikidozan’s popularity, and pro-wrestling was incredibly popular. However, when one spoke of Budo there was absolutely no talk of anything other than Judo, Kendo or Karate, it was a time when something like Aikido or koryu jujutsu would never fall from one’s lips. 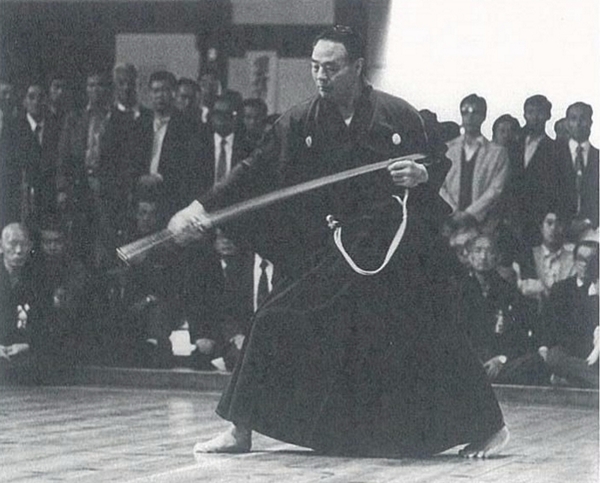 Tomoaki Danzaki, 1906-2003, of the Muso Shinden Ryu
He was a student of Morihei Ueshiba’s close friend Hakudo Nakayama

Q: What was your first impression upon seeing Aikido? I think that it must have been something of a completely different nature from Judo.

A: Yes, that’s right. It had a completely different image from the budo that I had seen previously. Conversely, that was one of the things that fascinated me. It wasn’t like Judo, in which one paired up and applied techniques – applying techniques to each other after establishing a distance felt new to me. When we went to visit there was no explanation, they would just apply techniques to each other in silence. I was just told “If you want to do it then come at me!”. The person who was teaching at that time was Hiroshi Tada Sensei.

Q: Did you turn towards Aikido right away?

A: No, I was studying for the university entrance examinations at the time, so I enrolled after I entered the university. I also continued Judo separately through my second year at the university. The Kodokan in Suidobashi, the Aikikai in Ushigome, both of them were close enough to walk to from my home. However, I gradually began to feel that there was a limit to my Judo. That is to say, since I don’t have anything close to a large build, no matter what I did I couldn’t win against large opponents. That was a time when they didn’t have the weight classes that they have today, which made me think that all the more.

A: Further, as opposed to Judo, in which most of one’s opponents are young, there are a wide range of ages in Aikido. There are young people, but there are also older people. Then, there were those who had resolved to come from the countryside to learn. It was a time in Aikido when both those learning and those teaching were young, so there was a kind of enthusiasm. For those reasons I gradually began to fall towards Aikido rather than Judo, and I came to learn Aikido exclusively from my second year at the university. 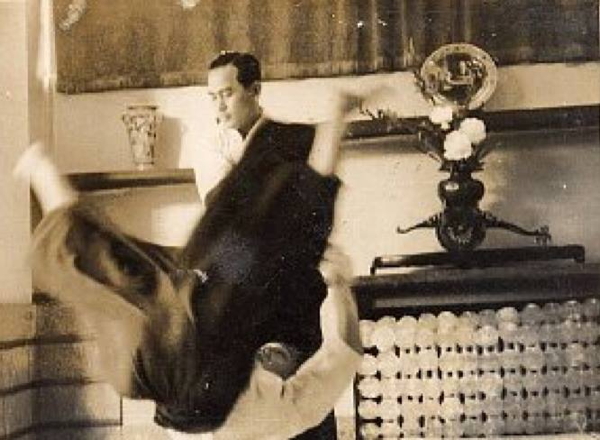 Q: That was a time when Aikido was young. What was it like back then?

A: O-Sensei was living in Iwama and Kisshomaru Sensei was a company employee, so instruction was centered around Tada Sensei. Even if one calls it Hombu Dojo, there were only around ten students. Unlike now, it was a wooden building, and there were two or so war refugee families living there – the space was partitioned for their use. The tatami was tattered and the roof was falling in – light was provided by a naked light bulb swinging from the ceiling. (laughing)

Q: That’s quite different from the way it is now, isn’t it?

A: Yes, it is. At the time I would attend the morning training at 6:30 a.m., and Kisshomaru Sensei was teaching that class. There were some five students living in the dojo, and although there were those who aspired to become professional Aikido instructors, there were also those who commuted to school or work from the dojo. Those people all had a sense of purpose, so they were all interesting human beings – there were many areas in which I was inexperienced, so there were many things that I was able to to learn from them.

Q: Did you become an uchi-deshi?

A: I was living the the Kudan district and I was close enough to walk to the Hombu Dojo in Ushigome, so I commuted. However, although I only attended the morning training at first, as time went on I became interested in the training being done by the uchi-deshi. I would go to the dojo early in the morning, and except for when I was in school I would spend all of my time living with the uchi-deshi, just returning to my home late at night. So, it seems that everybody thought that I was an uchi-deshi. (laughing) I also took care of O-Sensei, so I was treated almost the same as an uchi-deshi.

“When one was thrown by O-Sensei power would be added to the center of their body.”

Q: Who were the uchi-deshi that were living in the dojo at that time?

A: Tada Sensei wasn’t living there, the uchi-deshi that were living there were Sadateru Arikawa (有川定輝) Sensei, Masamichi Noro (野呂昌道) Sensei and Nobuyoshi Tamura (田村信喜) Sensei, who later went to spread Aikido in France. 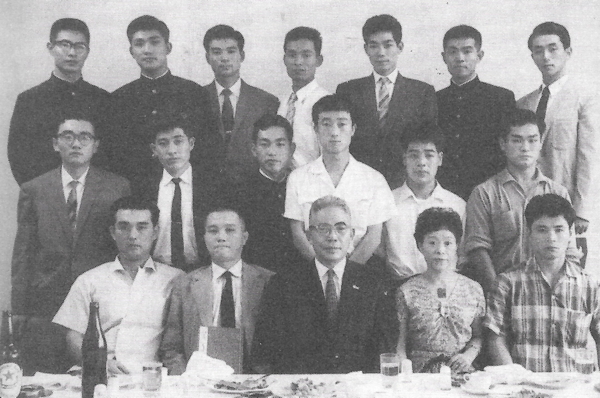 Q: In your book (“Aikido, My Way: the Story of Kobayashi Dojos”) you also wrote about Tadashi Abe (阿部正) Sensei and Koichi Tohei (藤平光一) Sensei…

A: Yes. Tohei Sensei was good at teaching, so I think that there were many people who were influenced by him. Abe Sensei once came to the dojo unexpectedly and shouted at me “Is Tohei here!?!”. I had never met him, but I thought “Is this the Abe Sempai that I’ve heard so much about?”. While this was happening Tohei Sensei came in, and as I was showing Abe Sensei in he said “Bring me some water”. As I rushed to bring him the water he said “No matter what I do I’m no match for this guy, so you throw the water on him!”. (laughing) Of course, it was an impossible situation since there was no way that I could do that, but as I paused in confusion he suddenly snatched up the cup himself and threw the water on Tohei Sensei’s face. As you might expect, Tohei Sensei just gave a strained laugh.

Q: What an incredible scene! (laughing) When did you become an instructor at Hombu?

A: At the same time that I graduated from the university. Work was difficult to find at the time, and without an introduction from the education department or the employment office it was difficult to find employment, but I carelessly stood up an interview that I had been recommended for by the employment office. (laughing) They scolded me – “We’re not going to throw any more leads your way!”. But at the time that I graduated I was a 3rd Dan, so I just became an instructor at Hombu.

Q: I’ve heard that your classes at the time were severe and that you received some complaints…

A: At the time that wasn’t limited to me, and it happened more than a few times. The instructors were all young and aggressive, and it wasn’t unusual for them to not take it easy even on the beginners when they were throwing. As for myself, rather than teaching other people I was more interested in my own training than anything else, so it was a time when that sort of thing couldn’t be helped. For that reason, when the uchi-deshi practiced together it was really something. Because at the time there was no training system like the one that is currently established the beginners would be mixed into the training with everybody else. We didn’t do a wide variety of techniques like we do now. “Watch and remember!” was how it was. All the same, I thought that wasn’t the right way, so when I taught I would separate the beginners and teach them separately. Thanks to that I became popular.

Q: You received instruction from the Founder Morihei Ueshiba, felt his techniques, what was your impression?

A: The O-Sensei that taught me was around 70 years old and he still had a lot of physical power. In Iwama he would lift bales of rice without a problem. While he had white hair and a small frame, he shoulders were broad and he had a solid build. When he held a bokken or jo his eyes would become especially sharp. When one was thrown by O-Sensei power would be added to the center of their body. When one is thrown normally it feels like a bouncing ball, it was only with O-Sensei that it felt as if you were being destroyed as you fell. That was really mysterious. O-Sensei would show us the techniques, but there was virtually no explanation of their content. He would often speak of the Kojiki, or about Omoto-kyo, but unfortunately the content was like grasping at clouds, and at the time I just thought “When will we get to move our bodies?”. (laughing) When I think about it now, I think that I should have paid closer attention. 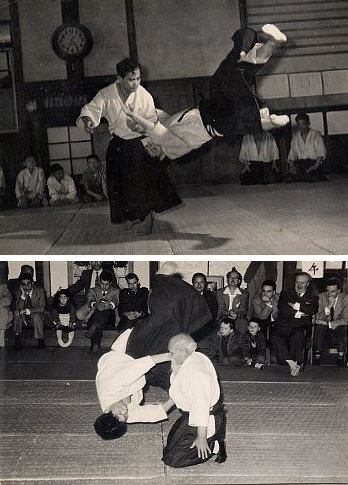 Q: There wasn’t any technical explanation at all?

A: Speaking of how to apply technique specifically, depending upon the person there are those who claim – “Ahh, he said this, he said that” – but I, at least, never heard any. When one watches O-Sensei’s demonstrations from his later years he appears to move like someone who has been liberated from earthly desires, but it is because one would be damaged if they didn’t take the fall that the people taking the falls must move in that manner. There are those who failed to understand that point and only saw the external appearance – this is the root of many misunderstandings.