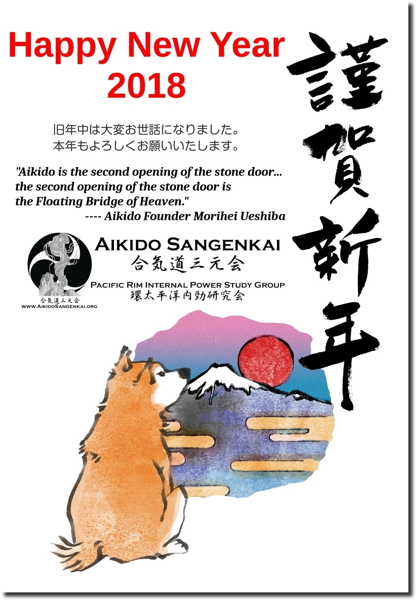 Happy New Year of the Dog 2018
from the Aikido Sangenkai!

Thank you all for your help and support over the last year. 2017 was a great year of training, and we’re looking forward to even more great training with you all in the coming year!

The past year has seen the number of articles on the Aikido Sangenkai blog pass the 150 mark, with more articles translated into more than fifteen languages. For the coming year, our Sangenkai workshop for February 2018 has registered attendees from Japan, Korea, the mainland USA, Sweden and our local and neighbor island Sangenkai members as well as a large group of New Zealand and Australia Sangenkai members coming for a special intensive workshop in addition to the regular workshop, making the Aikido Sangenkai the only Aikido group in Hawaii to hold regular workshops with an international attendance.

In three thousand worlds
The plum blossoms
Open all at once –
The stone door will
Open a second time.

Doka by Aikido Founder Morihei Ueshiba
“Journey to the Heart of Aikido:
The Teachings of Motomichi Anno Sensei“
by Linda Holiday and Motomichi Anno

As you can see on our New Year’s card above, Morihei Ueshiba often described Aikido as the “second opening of the stone door”. But what about the first opening, and why was it related to Aikido? For the answers to that one – check out this post about last year’s New Year’s card.

On this year’s nengajo we have the first sun of the year (初日の出) rising over Mt. Fuji. The tradition of viewing the first rising sun of the year is also linked to the story of the stone door and the reappearance of Ama-terasu Omikami in the world.

Which leads us to our thought for the coming year – a frequently cited quote from the Founder (actually a paraphrase of a Chinese proverb which has its roots in India – which demonstrates the pervasive nature of the idea across nations and cultures), from Aikido Tankyu #29:

There are many paths to the peak of Mt. Fuji, but they all end at a single destination. That is, the path to love. Everyone has different methods of training, but they all arrive at the same destination. The martial arts of Japan are in no way the paths towards war, struggle or conflict. They are the paths which all people can take with joy as brothers and sisters. 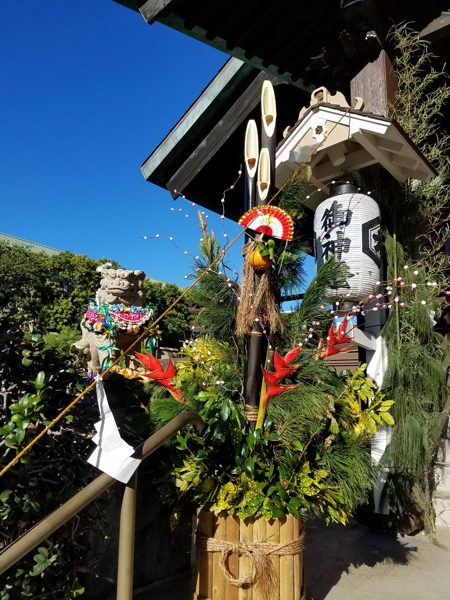 New Year’s Day at the Izumo Taishakyo Mission of Hawaii


Articles from the past year: