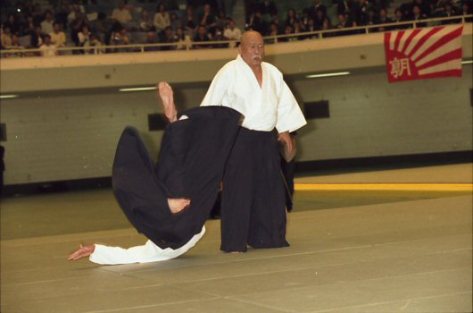 You may also be interested to read Ellis Amdur’s thoughts on training with Watanabe sensei in “It Had To Be Felt #9: Watanabe Nobuyuki: How the Mighty Have Fallen“.

This interview was published in a collection of interviews with students of the Founder published in Japanese as 開祖の横顔 (“Profiles of the Founder”) in 2009. It originally appeared in the August 2007 issue of Gekkan Hiden (月刊秘伝 / “Secret Teachings Monthly”), a well known martial arts magazine in Japan. 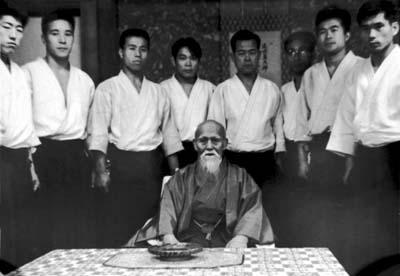 “It’s because I love it that I have been able to continue on the Way of Aiki.”

Q: How old were you when you enrolled as a student?

A: I enrolled formally when I became a Shodan, but I was training before that! I started when an Aikido club was formed at the Prime Minister’s Office (総理府, now the 内閣府) where I was working.  I was twenty-two years old at that time.

Q: Had you been practicing Judo until that time?

A: That’s right. Originally I did Sumo, then from Kyusei Chugaku (Translator’s Note: 旧制中学 – the pre-war system of secondary school for boys of 12-17 years of age) I started Judo. Ah, it was war time so I had to build up my body, I also did things like Jukenjutsu (銃剣術 / bayonet drills). I was pretty big, so I was always used as the practice target. (laughing)

Q: That must have been hard! (laughing) How about after the war?

A: I think that I was sixteen, in Miyazaki… 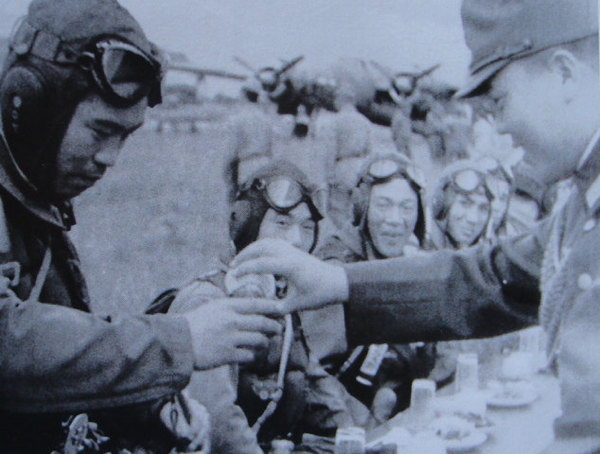 Special Attack Forces pilot in Miyazaki before departure for Okinawa

Q: There were many Tokkotai (Translator’s Note: 特攻隊 / “Special Attack Forces”, more commonly known in the West as the “Kamikaze”) bases there….

A: That’s right. There was a Kaiten (Translator’s Note: 回天 / “Return to the sky”, commonly rendered as: “The turn toward heaven”, “The Heaven Shaker” or “Change the World” – manned torpedoes and suicide craft, used by the Imperial Japanese Navy) Base nearby, I lived with the members of the Tokkotai from the age of fifteen. That’s why I’ve been smoking the Imperial Gift of cigarettes since that time. (laughing) (Translator’s Note: the Imperial cigarettes, adorned with the emperor’s 16-petal chrysanthemum emblem, were presented to Tokkotai suicide pilots, who used to smoke them as gift from the Emperor Hirohito before takeoff.) I figured I was going to die anyway. We were bathed in machine-gun fire. I survived, but the person walking in front of me was blown away, so it’s really mysterious that I was able to live, because everybody else died.

Q: After going through those experiences, what did you think upon encountering Aikido?

A: Umm, in the beginning an acquaintance forced me to go (laughing), because up until that time I thought “Judo is the best!”. I was motivated to throw myself into it at Hombu Dojo, someone told me to come over and then threw me down in Shiho-nage. I thought “What was that?”.  From that point on it was really tough – I’d go to the office in the morning and go straight to morning training from there after clocking in. After working at the office from 9:00 until Noon I’d train with the office Aikido club and then go to training at Hombu in the evening. After a while I started going to a coffee shop to chat with Osawa (Kisaburo) sensei after morning training, then go to training at the office Aikido club, and then back to Hombu in the evening.

Q: You weren’t working at all, were you? (laughing)

A: Well, somehow it worked out at the time. I think that my supervisor just gave up. At the time there were very few Uchi-deshi, so I took ukemi at the Self Defense Forces demonstrations, and my supervisor said “We’re part of the same administration, so go ahead and go”.  (laughing) But I actually did work, because I received special promotions several times – I always made sure to work the proper number of days. However, there came a time when my supervisor changed to someone who required everybody to be at their desks during working hours, so I said “I quit”. I never went back after that, not even once, because you can’t look back at the past.

Q: But wasn’t it difficult to make a living?

Q: So you really quit.

A: I really liked it (Aikido). (laughing) But I never thought that I would be able to eat off of Aikido. I just liked it, and the  more I did it the more I began to see something. I got caught up in the depth of it. (laughing)

The navel stands in the center.

Q: Do you remember your impressions upon meeting the Founder for the first time?

A: I thought “Ah, it’s a Samurai. Someone unlike anyone that I’ve ever seen before. The very air around him is different!”.

Q: Who were the Uchi-deshi at the time?

Q: Do you remember your impression of taking the Founder’s hand for the first time?

A: Well…I couldn’t grab it. (laughing) I was already sucked in and thrown. He would slip right in, and at the moment our eyes met my body would be moving and I would be thrown.

A: That reaction is a Budo reaction. Reaction moves right into movement. People today don’t have that sensitivity. The Founder would suddenly look at your eyes, and people whose reaction was slow wouldn’t be used for a while, so there was a sense of tension that we always had to be watching the Founder’s hands and feet. The Founder would make skillful use of the energy of people’s watching.

Q: Is it different nowadays?

A: It’s different. When I was there it was just at the time when the number of students from the general public were beginning to increase, and the atmosphere gradually changed. Originally Aikido was something practiced by people who had already trained in another Budo and were seeking to improve their skills. When the focus became people without any athletic experience things changed. So now when you say “grab my wrist” there are people who ask “Why should I grab it?”. (laughing) For that reason, in times past ukemi was not taught, everybody just took it naturally.

Q: Who among your Sempai influenced you the most?

A: Of course, Osawa sensei. 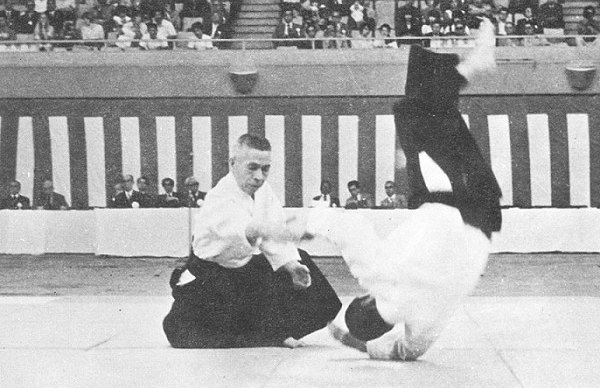 Q: Osawa sensei’s name has come up quite a few times in this series of articles, what kind of a teacher was he?

A: He was like a Zen Buddhist monk. (laughing) Maybe you could call him the head clerk – at the time he was the Dojo organizer. His Aikido was soft, but severe. He taught the Kenpei Tai (“Military Police Corps”) during the war, so there was severity in the midst of his kindness. I took ukemi during a demonstration at the Hibiya Kokkaido, but after the demonstration was over he took me to Hombu Dojo and made me take ukemi for one straight hour. “What you’re doing isn’t ukemi. Ukemi isn’t being thrown.” he said.

Q: What did he mean?

A: He meant that just because one is thrown doesn’t mean that it is ukemi. Just flying away isn’t ukemi. “Ukemi is to feel the technique of your partner and detect where they are trying to drop you” he said.

Q: Does that mean that ukemi is training in grasping a sense of your partner?

A: If you think about it, that’s it. Being thrown is that kind of training, that’s why Aikido training is made that way. It’s no good if you are just throwing or being thrown like an object, and being proactive and throwing yourself doesn’t work either. It is training in feeling and detecting a sense of your partner at the time. Now we have training in throwing and training in being thrown. Both sides ought to be working on their sensitivity, but they just cut it off and throw. I didn’t understand that at the time. That’s why I got thrown for an hour straight back then while being scolded “No good! No good!” – but at the end I was told “OK!”. I’ve never been scolded for that again since that time. It was a valuable experience.

Q: He was a very interesting teacher, wasn’t he?

A: Yes, he was. It wasn’t just the physical practice, it was training in seeing things. For example, when we entered a coffee shop together he would point at one of the customers and say “Hey, who do you think is stronger, you or me?”. When they said “Huh?” and looked confused he’d say “It’s no good unless you understand right away. Train until you understand right away!”. (laughing) Or he would say “If you think that I’m stronger than you then train again!”. (laughing)

Q: It certainly seems like a Zen Mondo (*Translator’s Note: question and answer dialogue). What words of the Founder do you most remember?

A: He mostly spoke about the Gods. What I most remember is “It’s the navel!”. But I didn’t understand at first, there were many things that I only understood after studying bonesetting. The navel stands in the center, when walking or sitting. The navel is history, it connects you to your parents and your ancestors.

Q: You have often said “Move like a ball around your navel” in your explanations, and “Lift up your shoulders and breathe firmly”.

A: That’s right. It’s because one raises their shoulders slightly than their shoulders can move easily. It is because one breathes firmly that they can stand firmly. If you think about standing normally, one rests on the surface standing like a stick. If you think of the navel, it is the line of the pelvis. Everything above the navel stretches upwards, everything below stretches downwards. This is the real way to stand. That is why we can walk in the shape of an “X”.

Q: You mean standing actively rather than just as an object that has been placed there?

A: That’s right. Then one can move because their back is filled with air. If you don’t have that your knees won’t move. The place where you are standing is “The Floating Bridge of Heaven” (天の浮橋), and I believe that place is alive. For that reason it is important to first become like a ball and stand firmly. 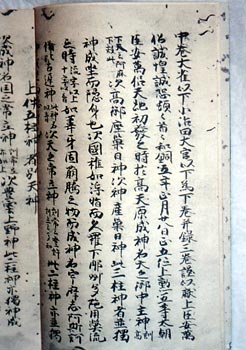 Q: The Founder often spoke of things related to the Kojiki.

A: That’s right. Once the Founder brought a human anatomical chart and and explained with the Kojiki in one hand. He said things like “the Naohi (“correct mind” / 直霊) is here” while pointing to the muscles and bones – he really explained quite clearly. At the time, however, I just thought “What is this?”. It was just the one time so I don’t really remember many details.

A: Rather then anything that he said, what I remember well is the Founder’s Kiai.

A: I remember it well. It wasn’t the normal “Ei!”, first there was an intake of breath like drawing a bow, then there was a “Iei-ei!” sound that felt like it was pulling at you. His voice wasn’t a straight line, it was a spiral voice. His abdomen would rotate and issue his voice. I remember that well.