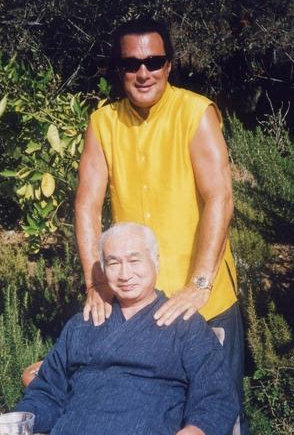 O-Sensei would say, “Well you aren’t a goat are you?”

A few weeks ago I was watching Michael Schiavello’s interview with Steven Seagal in which he named Hiroshi Isoyama (磯山博) as the Aikido instructor who has influenced him the most.

Hiroshi Isoyama sensei began training in the Iwama Dojo in 1949 at the age of 12 as a direct student of the Founder of aikido, Morihei Ueshiba. Over a long career in the martial arts, he has been Chief of Defensive Tactics for the Japan Self Defense Force Academy, and also instructed the U.S. Army in self-defense tactics. I still remember his comment about starting to teach Aikido to the military – “They didn’t believe that Aikido works – I made them believe”.

His trademark Ganseki Otoshi demonstrations are always a crowd pleaser at the annual All Japan Aikido Demonstration.

This is the first part of an English translation of an interview with Hiroshi Isoyama sensei that first appeared in the February 2009 issue of Gekkan Hiden (“Secret Teachings Monthly”), a well known martial arts magazine in Japan.

There was a short introduction to this work in the article “Morihei Ueshiba – Profiles of the Founder“.

I previously posted an English translation of the interview with Nobuyoshi Tamura sensei from that collection in two parts (Part 1 | Part 2). 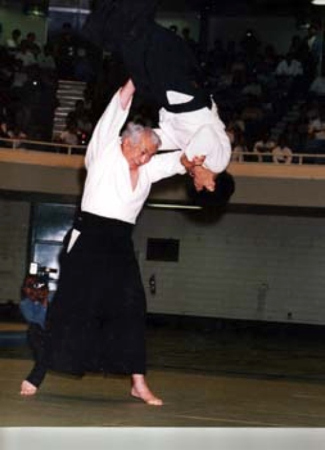 The Founder takes ukemi for me

Q: Sensei, you were born and raised in Iwama, in Ibaragi Prefecture, so it seems to be fate that you met O-Sensei while he was in Iwama and became his student.

A: That’s right, it was when I was twelve years old, in the first year of junior high school. I became a student on June 1st of Showa year 24 (1949). I remember this clearly.

Q: What was your motivation?

A: Other people may have had lofty goals, but I was very impure (laughing). Not to lose in a fight.

Q: Did you know anything about Aikido?

A: Nothing at all (laughing). Just that there was a rumor that “a master is here”.

Q: I have heard that it was difficult to become a student of Aikido at that time.

A: The time when I began was just when the junior division was started. Since this was the era of chaos after the war, it must have been the desire of the Founder to nurture the development of young people. It didn’t last more than three months at the most.

A: The training was very hard. When we started there were about ten of us, but they all disappeared. So in the end I went to train in the adult class. 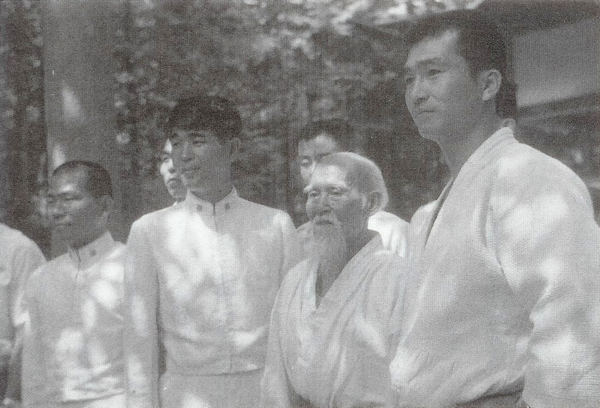 Q: So the training was quite hard?

A: It was tough. Since tatami would be damaged if it were in the dojo, it was cleared away and from the beginning we practiced on the wood floor. Ukemi was tough, and since techniques were applied right to the limit they really hurt.

Q: Was there any kind of special training for the junior division?

A: No. O-Sensei would come in, perform some Shinto prayers, and then practice.

A: Of course. He would take our hands one by one and apply the techniques – he took ukemi for us, too.

Q: I had heard that training with the Founder was normally a matter of a demonstration of technique followed by “do it!”, but that’s completely different. This is the first time that I have ever heard of him taking ukemi.

A: He’d say “Isoyama, come!”, and allow me to take his hand and apply Nikyo or something.

A: It felt like applying technique to a large tree. However, he’d take the proper ukemi for me, and not try to struggle against me or sneak out of the technique. About the time that I was in high school I tried to force some power into the technique, but I couldn’t put any power into it.

A: I don’t know. It felt like being suppressed while power was being drawn out by the opponent. I couldn’t apply any power. Even now I really don’t understand what happened.

A: When he partnered with me for Kokyu-ho his shoulders would drop down immediately, and he’d be as immovable as a mountain. Before I knew it, as I struggled to somehow raise my hands, I’d find myself pushing on O-Sensei’s chest with my head. He’d say “well you aren’t a goat are you?” and instantly crush me (laughing).

Q: That’s also a valuable experience, isn’t it? (laughing) Were most of the techniques performed from a seated position (“shikko” / 膝行) at that time?

A: No, first we would do Tai-no-henko, I think that shikko training is something that was developed later. In terms of warm-up type exercises, perhaps there was only Funakogi-undo (“rowing exercise” / 船漕ぎ運動). Then we would begin techniques, and at the end would be finishing exercises (“shumatsu undo” / 終末運動) and Kokyu-ho.

Q: How were the techniques named at the time?

A: “Kyo” wasn’t used yet, we said things like “Ikkajo” (一ヶ条) and “Nikajo” (二ヶ条). I think that the first time names like “Ikkyo” (一教) and “Nikyo” (二教) were used was when the were used in the first book “Aikido” that was published by Kisshomaru sensei.

Q: However, the curriculum itself that exists today was in existence from that time?

A: That’s right, but at that time O-Sensei would decide upon the content depending upon how he felt at the time. So if he said “Today is suwari-waza!” then we would do nothing but suwari-waza until the skin peeled off our feet and left them bleeding. It was very hard. 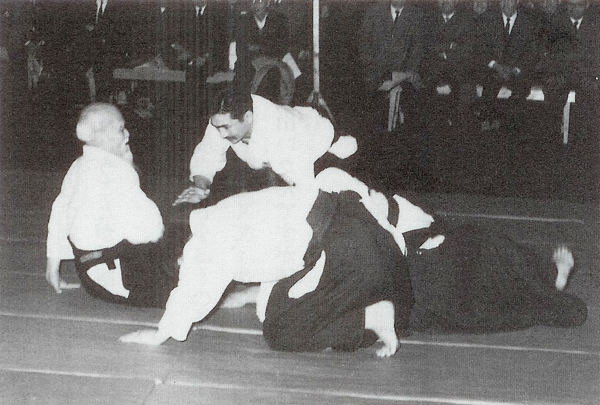 The overwhelming speed of the Founder’s movement

Q: The junior division fell apart and you entered the adult division, who was training there at that time?

A: There were a number of people. Among the uchi-deshi was someone who went to do pro-wrestling with Rikidozan (力道山), he probably thought that he was taking it easy on me, but for me it was really hard and painful. Of course, since I was a child I would start crying. When that happened he would shout, “Idiot! This is no place to be crying!”, grab me by the belt and throw me out the window.

Q: It was really tough, wasn’t it!

A: Then he’d say, “If you start feeling like you want to practice then come back in through the front door!”. That kind of thing happened many times, it was really frustrating.

Q: Abe sensei was from around that time, wasn’t he?

A: Yes, that’s right. However, I was never taught directly by Abe sensei, we just received O-Sensei’s training together. And then, of course there was Morihiro Saito sensei. There were many other people, but not many of them have continued.

Q: What about Shioda sensei?

A: At that time he wasn’t around much anymore, so I never got a chance to work with him.

Q: How did it feel to actually take ukemi for techniques from the Founder?

A: In throwing techniques or whatever we were doing it always felt as if I were protected and could receive them in safety. There were never any feelings of fear.

Q: How about controlling techniques?

A: It would feel as if a weight were loaded on you, and you couldn’t move. There are pictures of O-Sensei holding people down with a single finger – there a single point is being held down. It felt like a specific vertebrae – it was done to me many times, and O-Sensei would always smile and hold me down at the same point.

Q: I have heard that the sword was often practiced in Iwama.

A: Yes, that’s right. It didn’t always happen, but occasionally we did it. I was sometimes the uke, and it was extremely fast! We would begin facing each other in the Seigan posture (“seigan no kamae” / 正眼の構え), and just as I would begin to raise the bokuto above my head the tip of O-Sensei’s bokuto would already have entered to my throat.

Q: Did you raise it up at normal speed?

Q: I had heard that he was fast, but this is faster than I had imagined.

A: He was fast, and there was a lot of pressure. There are demonstrations by O-Sensei where people are falling all over the place – there too O-Sensei’s hand is entering just as they move, and they fall without thinking about it because there is no time to do anything else. His forearms were amazing too, they were like logs.

Q: He had an amazing amount of power.

A: It was superhuman strength. But it’s not as if he was clenching to produce power, it felt as if it was entering him naturally. When I was feeling cocky I tried to force things many times, but he wouldn’t even pay attention. We would try to do the same thing, but somehow we would always end up matching with our partner’s power and the power would slip right in. O-Sensei would never become flustered. Whether we were trying to force something with all our might or we were doing nothing, O-Sensei would do things with the same power. It felt as if his Ki was draining out, but it wasn’t. In that area he was completely different. 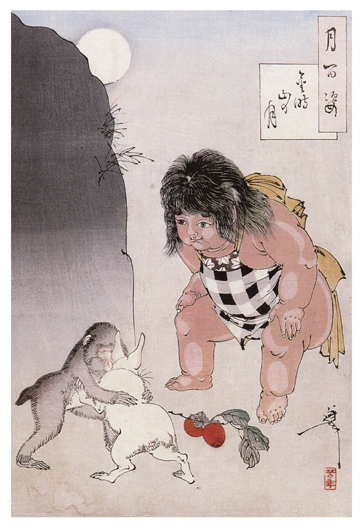 Q: What did the Founder do for his own personal training?

A: When training alone he would do sword cuts. He would often go shirtless in the summer, but in order to keep his abdomen from becoming chilled he would wear a “haragake” (a Japanese style workman’s apron) like Kintarō and swing a thick iron staff (“tetsubo” / 鉄棒).

2 thoughts on “An interview with Aikido Shihan Hiroshi Isoyama, Part 1”