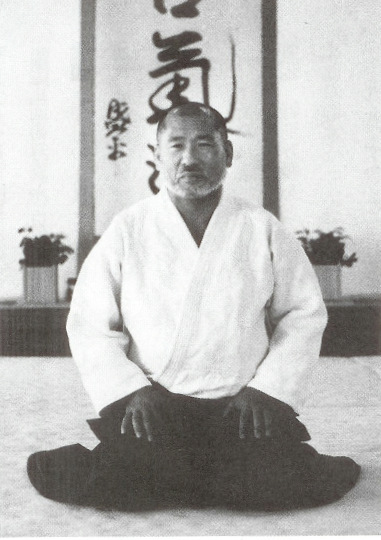 Nobuyuki Watanabe is a senior instructor at Aikikai Hombu Dojo and a Japanese bonesetter (接骨 / Sekkotsu – a form of joint manipulation similar to chiropractics). He was instrumental in making Isogai Dynamic Therapy (a chiropractic method of treatment to compensate for functional leg length differences) known in Germany, where he frequently travels to instruct in Aikido.

His famous “no touch” Aikido demonstrations at the annual All Japan Aikido Demonstration (全日本合氣道演武大会) are highly controversial, but always elicit an enthusiastic response from the crowd. The late Sadateru Arikawa used to watch those demonstrations each year with a scowl on his face!

This is the second part of a two part translation of an interview with Nobuyuki Watanabe sensei. You may wish to read Part 1 of this interview before reading this section.

This interview originally appeared in the August 2007 issue of Gekkan Hiden (月刊秘伝 / “Secret Teachings Monthly”), a well known martial arts magazine in Japan. It was also published in a collection of interviews with students of the Founder published in Japanese as 開祖の横顔 (“Profiles of the Founder”) in 2009. 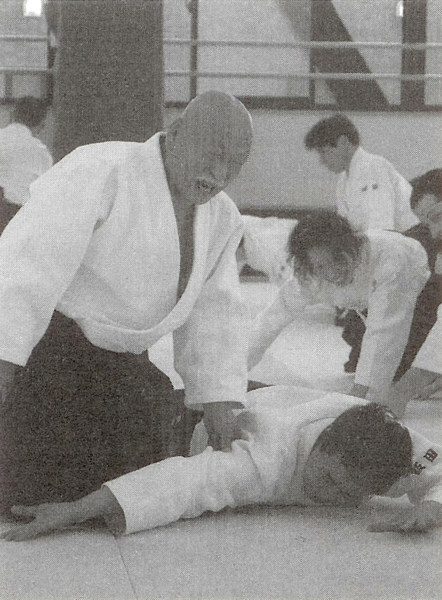 The Breath of Aikido is Inhaled in a Circle.

Q: Were you ever scolded by the Founder?

A: Once when I was training with a young woman, he yelled “You, just take ukemi! You must treat young women with care!”. (laughing) I ended up taking ukemi for an hour. It was good training! Since the young woman didn’t have much strength, if I were to stop in Shiho-nage her hands would come off. Since it was right in the middle of the technique it was quite dangerous, so I stayed attached until the very end, leading her slightly with my movement.

Q: So it becomes practice in sensing the connection of power?

A: People nowadays can’t do this. They end up just trying to throw. It’s important to use your body softly and sense the power. Also, although it didn’t happen to me, he would scold the people in the office when they walked behind them – “Say excuse me and pass in front!”. Budoka don’t like it when people are behind them, but nobody understood that at first. He was strict about things like that. 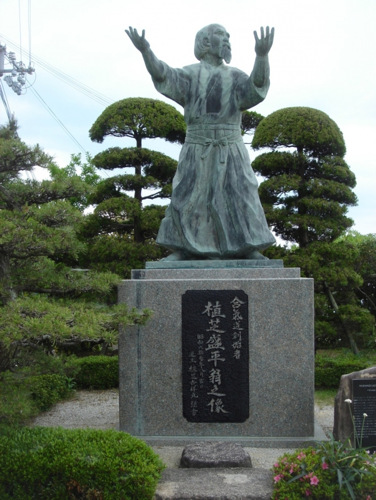 Q: I understand that you get a lot of hints from photographs of the Founder?

A: That’s right. I wasn’t able to see the Founder from the front very often, so I would stare at the pictures and wonder “Why does he hold his hands like that?”. I just kept on wondering “Why? Why?”.

Q: Did you notice something in the photographs from the front?

A: When you look at photographs of the Founder carefully you’ll see that his chin is lifted slightly upwards. That bothered me for a long time – normally in Budo they say “pull in your chin”, but when you actually try it you find that your breathing becomes more comfortable. The Founder would say “Breath out while breathing in, and breathe in while breathing out”, but I understood that from the photographs – there are many hints like that.

Q: Did the Founder say anything in particular about Kokyu (breathing)?

A: He never said anything about special breathing, but I was told “for Budo breathing inhale in a circle while exhaling in a circle”.

(Translator’s Note: some students of Morihei Ueshiba have expressed the opinion that this is referring to a form of abdominal breath training.)

A: That’s why I fill both lungs at first and then move while filling one lung and emptying the other. Of course, the opponent comes towards the side that is inhaling.

Q: Is it difficult to breath out while breathing in?

A: Not at all – if one vocalizes while moving it happens naturally, so I teach students “Say ‘Wa–‘ while you do it”.

Q: Did you think of that way of explaining it on your own?

Q: Is that right? (laughing) Is there anything that you remember from that time?

A: The Founder would move his hands when they were resting on his knees in Seiza. One person asked “Sensei, why are your hands moving?”, and they were told “I breath in with this (the right hand) and close it, and breath out with this (the left hand)”. At the time I just listened without paying any special attention, but now I think “Ahh, of course…”. But anyway, there was a lot of talk about the Gods. (laughing) 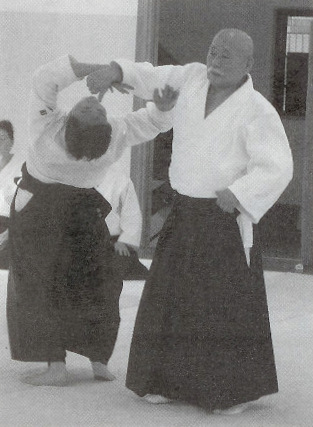 Aikido is the Work of Knowing Yourself

Q: You often make an important point of the hands…

A: The provide the biggest hints! Most people just use their hands very carelessly. Hands are not just for grasping and releasing, they are important for transmitting sensation to the opponent.

A: After the hands open wide they pucker slightly, don’t they? That’s suction. At that time one feels the sensation of air on the hands and moves with the intention of throwing that air towards the opponent’s face. If one continues to hold the feeling of that sensation then they become able to move without pulling or pushing. It is the hands that create that kind of sensitivity.

Q: What kind of training do you use to develop that?

A: Many things. For example, striking a wall with a ball of air and visualizing it dispersing in all directions. When you do that you will find the place that you can strike with the best feeling. You’ll understand where the ball of air explodes with a bang. When standing up and sitting down, if you sit slightly when standing up you’ll be able to stand up very quickly and firmly. It’s a subtle sensation.

Q: Why did you begin to think of things like that?

A: Hmm…I guess it was after I started teaching. When you start to teach students their movement starts to become like yours after two or three years. At first I was happy about it, but when I thought about it I realized that it was no good. I realized that it meant that I wasn’t changing, and I thought “This is no good.”. If I don’t continually improve then they won’t improve either.

Q: Is that right?

A: The I went to teach Aikido to the Maori in New Zealand, but when I tried to start my explanations with “O-Sensei….” they said “We don’t know O-Sensei. We are being taught Aikido by you, so teach your Aikido.”. “Ah…that’s it!” I thought. Naturally, O-Sensei and I are different so I can’t say “O-Sensei is like this”. From that time on I began to think of my own Aikido.

Q: Did the way that you teach change as well?

A: It changed. “I do it this way, but all of you are free to do as you wish.” – everybody’s body and mind are different, so you can’t do the same thing.

A: From what I saw I don’t really know, but once in morning practice he said “I’m sorry, what I taught you yesterday was mistaken. The Gods scolded me in my dreams.”.

A: Yes, and then he showed us, but we couldn’t understand what was different. (laughing) The form was probably the same, but mentally the inside must have been different.

Q: I’ve heard that the Founder disliked being asked “could you show me that one more time?”.

A: That’s right. So he was strongly opposed to Kata practice like “do this and then do this”. 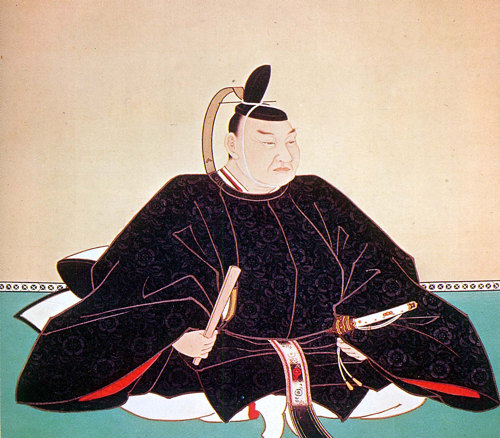 Q: It was OK if each time was different?

A: Yes, it was. “Ichigo ichie” (一期一会 / “once in a lifetime”) – from moment to moment in the technique the body is moved by the mind so one cannot do the same thing twice. At the moment that O-Sensei entered the Dojo his body would expand in a flash and the vibrations of his presence would spread through the room. He wasn’t teaching, it was his own personal training, so he would expand his feelings firmly in all directions. It’s different if one is trying to teach. For that reason I don’t try to teach either. It’s training. When one tries to teach the level of training goes down.

Q: Your own personal training?

A: But you can’t train by yourself, you know. A long time ago I was training at Hombu and everybody said that I felt heavy. Even O-Sensei said “You’re heavy. You’re just practicing for yourself. That’s why it’s no good. First, become an iron ball. Next, become a golden ball. Gold melts easily and is soft. That’s why it good to work with.”. That’s why you must stretch out your senses each time and think about what you’re doing.

Q: Do you mean that O-Sensei didn’t do things out of habit, but followed his senses each time?

A: Where are the people who can develop that kind of sensitivity today? Everybody gets too fixated on Kata. The Founder’s favorite saying was “Throw a thousand as one, throw one as a thousand” (千切ってはなげ、投げては千切り). Like in the Samurai movies. He really liked that one. (laughing)

A: They are techniques for conditioning your body and developing your senses. So if you think “what is Aikido?”, in the end it must be to know yourself, to live your life.