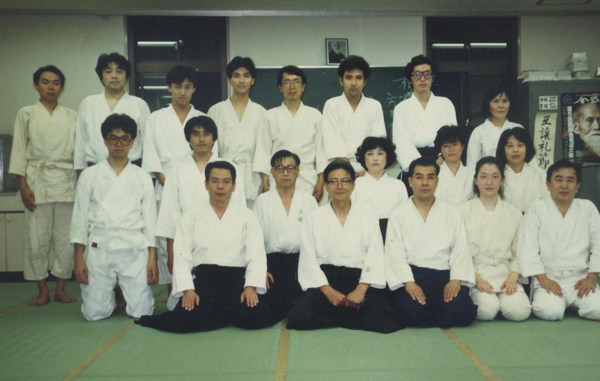 “Budo is not just moving your body. At the end is whether to live or die, your view of life and death.”
-Shigenobu Okumura

Shigenobu Okumura was one of the few pre-war students of Aikido Founder Morihei Ueshiba to remain at Aikikai Hombu after the war. Born in Hokkaido in Taisho year 11 (1922), he was a senior instructor at Aikikai Hombu dojo until his passing on August 12th, Heisei year 19 (2008).

He began Aikido in Manchukuo – the Japanese occupied Manchurian state “Manshu-koku” under Kenji Tomiki. While a student at Manshu Kenkoku Daigaku he was drafted into military service, and was later repatriated to Japan after three years as a prisoner of war in Siberia.

I remember watching him through an entire All Japan Aikido Demonstration one year as he sat and took notes on each and every group and individual participating. I’ve often wondered what those notes contained, and what happened to them.

This is the first part of a two part English translation of an interview with Shigenobu Okumura sensei that was published in a collection of interviews with students of the Founder published in Japanese as 開祖の横顔 (“Profiles of the Founder”) in 2009. It originally appeared in the January 2008 issue of Gekkan Hiden (月刊秘伝 / “Secret Teachings Monthly”), a well known martial arts magazine in Japan.

There was a short introduction to this work in the article “Morihei Ueshiba – Profiles of the Founder“. 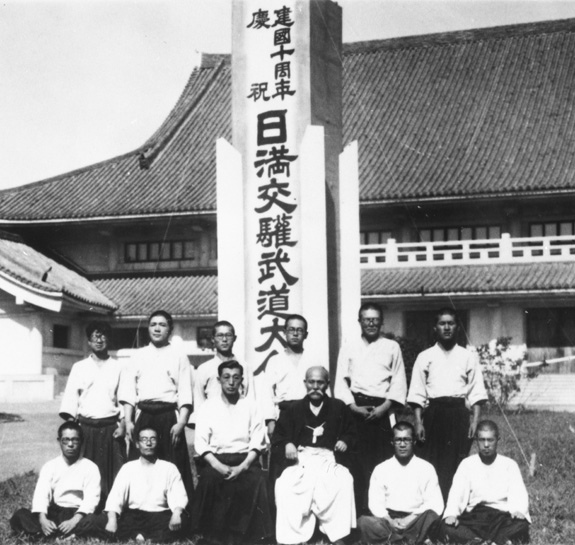 Q: First, I would like you to ask about your reasons for beginning Aikido.

A: The first time that I learned formally was in Showa year 15 (1940), when I entered the university.

Q: Which university are we speaking about?

A: That’s right (laughing). I was born in Otaru (小樽), Hokkaido, but when I was three years old we moved to Dalian (大連) because of my father’s work, and lived there on the continent. In Showa year 18 (1943) I graduated provisionally due to the student mobilization, and then after the war spent three years and eight months interned in Siberia before I returned to Japan.

Q: This is like something out of the history books, I can’t even begin to imagine it…it’s shocking.

A: I suppose so. I suppose that it’s difficult to understand those times now. Manchuria was a strange place, with Japanese, and of course Manchurians, and former nobility that had fled from the Russian revolution running bakeries. Kenkoku Daigaku, where I learned Aikido, also had Russian students and we practiced Aikido together. The first time that I ever saw Aikido was before I entered the University. 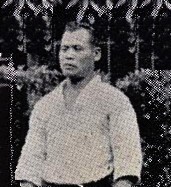 Q: And when was that?

A: When I was in elementary school my mother was the head of the Women’s Association, and at that time the police held a “women’s self-defense” workshop – that was Aikido. At that time Hoken Inoue sensei was teaching (*井上方軒 was the name that Morihei Ueshiba’s nephew was using at the time, later he called himself Noriaki Inoue / 井上鑑昭). However, at that time it just looked like they were messing around in zagi (*座技 / “suwari-waza”), and it was not very interesting to the mind of a child. For that reason I only did Kendo and Sumo. Because if you won with one of those at the festival you would receive a prize. (laughing)

Q: Why did you begin Aikido at the university?

A: Because I thought that Aikido would be able to handle anything. For example, the Judo instructors were strong in empty hand fighting, but if you had a sword then they were no good, and the Kendo instructors were not good at empty hand fighting. Be that as it may, in Aikido when you hold a sword it becomes Kenjutsu, if you hold a bayonet it becomes Jukenjutsu, if you are empty handed then it becomes hand-to-hand combat. And that’s why thought “this way is the best”. 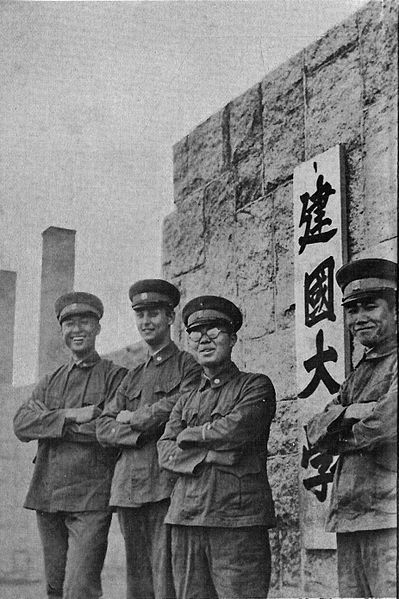 Q: Who did you train under at the university?

Q: Was the Founder teaching directly at the university?

A: That was because O-Sensei was a Bujutsu consultant to Kendai. At that time Kendai was recruiting the top people in Budo – in Kendo it was Yasohachi Shimatani (島谷八十八) or Jiro Asako (浅子次郎), in Judo it was Seizaburo Fukushima (福島清三郎) or Katsu Manda (万田勝), it was truly a happy time.

Q: What impression did you have upon seeing the Founder’s Aikido for the first time?

A: The first time that I saw him was the year that I entered the university, Showa year 15 (1940). But what I remember most was the demonstration at the Shinbuden (神武殿) celebrating the tenth anniversary of the founding of Manchukuo.

Q: I heard that the “Last Emperor”, Emperor Puyi (溥儀), saw the Founder’s demonstration and was deeply impressed.

A: Kendai was a university that was directly attached to the Emperor, it wasn’t run by the Ministry of Education. It was directly controlled by the State Council, so the Emperor Puyi was often there. At the demonstration held then Hideo Ohba (大庭英雄) took ukemi, but he was very stiff because he was so nervous. That was why, when the Founder said “Come for real!”, he took him at his word and came flying headlong – when I asked the Founder about it later it seemed as if he was surprised as well! (laughing) I heard that after the demonstration, just as the Founder was about to burst out in anger, the Naginata instructor Hideo Sonobe (*園部秀雄, a famous instructor of the Jikishinkage-ryu) told him “Today’s demonstration was the best that I’ve ever seen!”, and he quickly cooled off. (laughing)

Q: Was learning Aikido at the university an extra-curricular activity?

A: It was part of the curriculum of the university. With a set number of credit hours. At that time O-Sensei was called by the title of “Hanshu” (範主). I believe that Aikido was called “Aiki Bujutsu” at that time. Then, around Showa year 18 (1943) the name became Aiki Budo, and then “Aikido” after the war.

Q: Why was Aikido selected to be part of the Kendai curriculum?

A: At the time there was an argument over which should be made a part of the curriculum, Karate or Aikido. I have heard that it was at that time that Katsuhiko Kakei (筧克彦) and Kiyoshi Hiraizumi (平泉澄) from Todai (Tokyo University) saw a demonstration by O-Sensei at Hombu Dojo and were immediately persuaded to recruit him. These events were witnessed by the late Kisshomaru Sensei, who was still a student at the time. 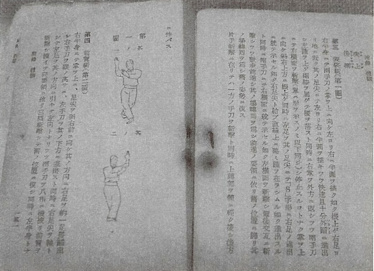 Kenpei Taijutsu Kyoiku Kitei (憲兵體術教育規定)
a teaching manual for the Military Police
from Shigenobu Okumura’s collection,
it begins with Aikido and then references a number of arts

Q: And so, happily, Aikido as a part of the curriculum was born.

A: At the beginning Rinjiro Shirata was scheduled to instruct, but since Shirata-san received a “Red Paper” (*a draft notice) Kenji Tomiki, who was already in Manchuria teaching at Daito Gakuin (大同学院) and the Kenpeitai (*憲平隊, “Military Police Corps), was selected.

Q: What were the Aikido classes like at that time?

A: There really wasn’t much of a system. O-Sensei would first show an example and then everyone would attempt to imitate the form.

Q: Then it was just the same, wasn’t it. Since it’s a university, wasn’t there a greater attention to detail?

A: Well, the request from the students was “We would like to remember the techniques by doing each of them a little more thoroughly”, but O-Sensei would just say “Don’t remember them – forget them”. These days I say the same thing, but at the time I was confused. Because it was so completely different from any other form of physical education. In any case, there weren’t even any names for the techniques. (laughing)

A: I remember using such things after hearing them from my Sempai, but there was no formal naming method. Names like “Muna-dori Ikkyo” for techniques were decided after the war. A person from France named André Nocquet became a student, and was worried about what would happen when he returned to his country without any way of naming the techniques, so we said “Let’s make a formal decision” and created the names. That said, Kenji Tomiki sensei, who was a Shihan, also had some difficulties. The Founder wasn’t always around, he would just be there teaching from October to November. For that reason, Tomiki-san thought of a method of teaching Aikido as Aiki-taiso. or physical education. The result was a parting of the ways after the war…

Q: Was the Founder opposed to those kinds of things?

A: Yes, he was. His thinking was “Aiki is training in becoming one with your partner, so there is no meaning in training by yourself”. Whichever view you hold, it’s difficult to judge, isn’t it? For myself, I am opposed to making Aikido into a sport with winning and losing, but I think that it might be a good thing to have solo forms like Taiji.

Q: Did you ever see the Founder training by himself?

A: In his later years he would train with a staff, swirling it around over his head, a form of solo Misogi. I think that this was O-Sensei’s individual training.

Q: That is preserved in the old photographs, isn’t it? What was the Aikido that the Founder taught during his time in Manchuria like?

A: After all, because those were the times that they were, the focus was on things that could be of immediate use in combat. The specialties of Aikido are joint and striking techniques, attacks to the facial surfaces. It is because it had these things that Aikido became a part of the curriculum. 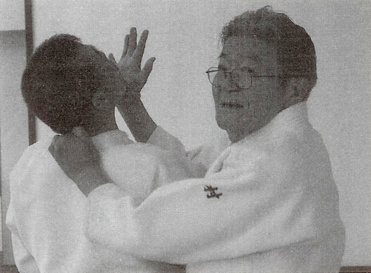 Q: Were you taught striking techniques by the Founder himself?

A: Yes, we were. A swift blow to the eyes, or a blow to the jaw with the heel of the hand.

Q: What points did the Founder see as important?

A: Not “conflicting”. Aikido enters with Irimi and settles things in an instant, without pairing up like Judo. If it’s Irimi-nage then you throw them, but if you strike them with the heel of your hand (in the instant of the Irimi) then it’s all over. “Without conflicting you hold their life in your hands” is a special characteristic of Aikido.