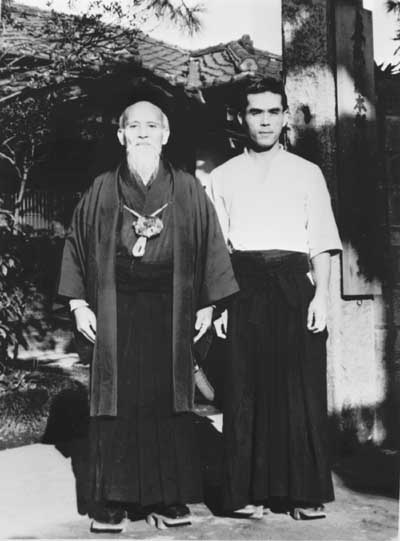 Born into a family of Omoto-kyo believers in Kagoshima Prefecture in 1923, Kanshu Sunadomari (砂泊 諴秀) became an uchi-deshi to Aikido Founder Morihei Ueshiba O-Sensei shortly before World War II. Returning to Kyushu after the war he gave the first public demonstration of Aikido there in 1953, and opened the Manseikan Aikido dojo in Kumamoto shortly thereafter. Promoted to 9th Dan by Morihei Ueshiba in 1961, he became independent from the main Aikikai organization after the death of the Founder in 1969. He passed away in November 2010.

His book “合気道で悟る” has been published in English as “Enlightenment through Aikido“.

After a number of years in the relative obscurity of Kyushu, Sunadomari Sensei emerged to participate in the 1st Aiki News Friendship Demonstration in 1985. Here is a short account of that participation written by Aiki News (now Aikido Journal) Editor Stanley Pranin:

When Kanshu Sunadomari Sensei and his entourage of about 15 students who had come all the way from Kyushu took the stage at the Friendship Demonstration, no one knew what to expect. He began with a rather long introduction where he spoke for nearly 30 minutes. I was becoming quite nervous because this was obviously going to throw off our schedule. As I recall, we asked each sensei to prepare about a 20 minute lecture-demonstration, knowing that they probably run over. Then the Manseikan students performed a couple of martial art inspired dances replete with fans and music! Everyone was becoming antsy because the demonstration had still not started. Even the audience of 900 people was becoming restless not knowing what to expect next.

It turns out we needn’t have worried because Sunadomari Sensei gave one of the most unusual and polished performances I had ever seen. His aikido was totally different from any other. Kanshu Sensei’s technique was dynamic and flowing with a great emphasis on the principle of kokyu. He had a peculiar way of using his wrist and forearm to break uke’s balance with impeccable timing. Kanshu was a small man, but it was obvious he had discovered some subtle ways of generating power that no one had seen before. He also showed bokken and jo kata that were completely original. Kanshu capped off his demonstration with several spectacular multiple-attack defenses that were superbly executed. When Sunadomari Sensei’s performance had concluded, he and his students received a resounding round of applause. I am very thankful that we captured his unforgettable performance along with those of the other teachers that day 27 years ago. It is even more gratifying to know that aikidoka today can witness for themselves what happened on that special spring day long ago.

This is the first part of an interview that originally appeared in the August 2004 issue of Gekkan Hiden (月刊秘伝 / “Secret Teachings Monthly”), a well known martial arts magazine in Japan. 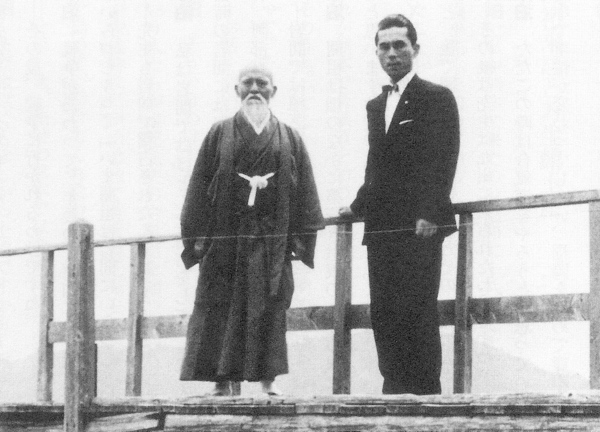 Meeting the Founder and the Military Police School

Q: I’ve heard that you first met the Founder, Morihei Ueshiba, through Omoto-kyo, what was your first impression of the Founder?

A: When I first met him I thought “So people like this really still exist?”. It wasn’t as if I had seen his techniques, so perhaps this impression was based upon his own inherent dignity. I was in my teens at the time.

Q: How did you come to meet him? 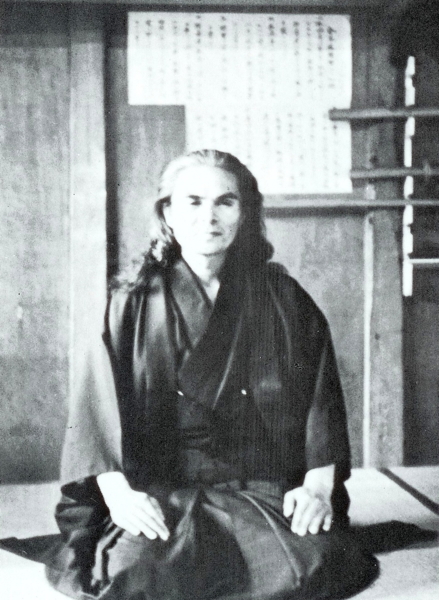 A: In my case, my older brother (Kanemoto Sunadomari  / 砂泊兼基) had a relationship through Omoto-kyo and was being taught by Ueshiba Sensei. Because of that relationship my brother took me to meet Ueshiba Sensei. It was just after the beginning of the Greater East Asian War (大東亜戦争 / World War II), so it must have been around Showa year 16 (1941). I became an uchi-deshi right after I met him then.

Q: Who were the uchi-deshi at the time?

A: It was wartime, so even if you called them uchi-deshi they would come in and out. Hirai-san (Korindo Aikido, Minoru Hirai / 光輪洞合氣道、平井稔) was the General Affairs Director. That was the time. 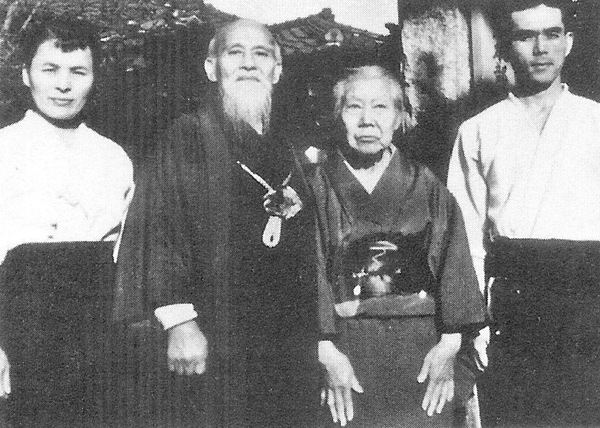 A: The Founder would only show us Kata. From Ikkajo through Yonkajo, Irimi-nage and Kote-gaeshi. He’d take one of the uchi-deshi out in front, and then if it was Ikkajo he would show us Ikkajo once on the left and once on the right and then have everybody do it. So in an hour of practice we’d only do about three techniques. That’s the way that time was divided in that period.

Q: Did you have questions about the training, or things that you didn’t understand?

Q: So you lived as an uchi-deshi for about a year and a half?

A: I think that it was actually about one year. Because I joined the military part way through.

Q: What comes back to you most from that time?

A: When I think back now, it was going to the Military Police School (憲兵学校) with the Founder as his Otomo (“attendant”). The Founder would go to teach there twice a week. That time was extremely precious to me.

Q: What was the focus of the Founder’s instruction there?

A: Mostly locking techniques, with a focus on Nikajo or Sankajo, and Kote-gaeshi. Things that would lock up the opponent decisively. It was about an hour or an hour and a half, first the Founder would apply a technique on me and then the members of the Military Police would imitate that. I would sometimes correct their technique, but since I was still a child the Military Police must have thought “What’s that kid doing?”.  I would smile – then lock them up and make them scream.

Q: As I listen to you, it seems that there was not much of what we call Kokyu-ryoku, but mainly practical physical controlling techniques.

A: That’s right. It was mainly things that they would be able to use in their work right away. It was a chance to receive techniques from the Founder that were not usually practiced in the dojo, so it was a very valuable experience for me. For example, the Military Police were not allowed to practice throwing techniques, but he would use me to demonstrate them. That was really incredible. I would fly from one end of the dojo to the other. I would struggle to get up each time, but the Founder would already be in front of my eyes and I would be thrown again. Thrown, stand up, then thrown again. I would turn towards him frantically while taking ukemi each time – these were throws that weren’t usually done in the dojo, that weren’t usually shown, so it was an extremely valuable chance for me.

A: In the end the Founder would say “Don’t think about technique”, and would never teach us how things were done. That is why I would try to sense the condition of being thrown by the Founder, get right up and be thrown again. This repetition would be my study, and would come to life in my demonstrations when Aikido began to spread.

Q: After that you went to war?

A: Kisshomaru-san was there I went to visit the dojo in Tokyo two years after the end of the war, in Showa year 22 (1947). He said “The Founder is in Iwama”, so I went to Iwama.

Q: Did you train in Iwama?

A: I didn’t train much in Iwama. I just went thinking to greet the Founder. There were a few people in Iwama at that time – Abe, who went to France (Tadashi Abe Shihan), was there. Abe started during the time that I was an uchi-deshi. 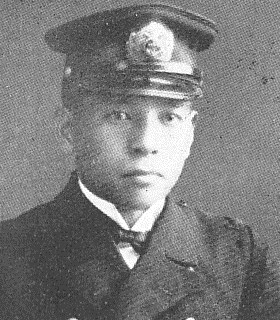 Q: Did you speak with Ueshiba Sensei in Iwama?

A: The Founder was living in a thatch roofed house in the middle of the fields, and I think that he couldn’t recall my name right away. He looked at my face and said “this is an important man” to two people in the corner. I think that he may have been talking about how I had acted as his representative on the neighborhood association and during rationing. When I asked later I heard that one of those people was Taku Mikami (三上卓) of the “515 Incident” (Translator’s Note: 五・一五事件 an attempted right wing military coup d’état on May 15th 1932 in which Prime Minister Inukai Tsuyoshi was assassinated by 11 young naval officers. Among others, Morihei Ueshiba’s close associates Shumei Okawa and Mitsuru Toyama were among the backers of the coup.)

Q: After that you went to Kyushu?

A: However, I was not thinking of doing Aikido at that time. I went to Fukuoka for work, but the situation changed and I went to Kumamoto instead. I think that this turned out to be a good thing in the end.

Q: So you started doing Aikido there? 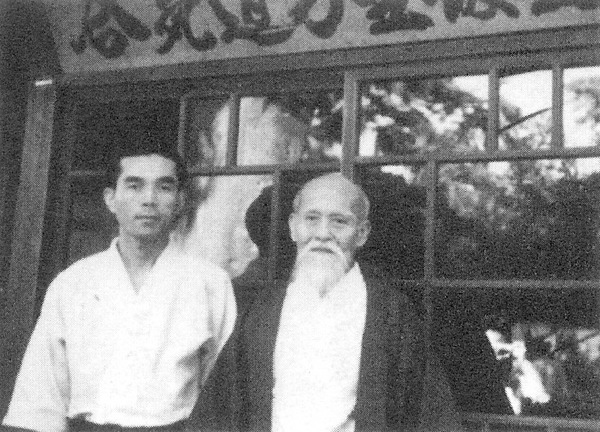 Kanshu Sunadomari and Morihei Ueshiba
in front of the Manseikan Dojo, May 1961

Visits from the Founder and Souvenirs of the Manseikan

A: I came to Kumamoto in Showa year 28 (1953). When I asked around I found people who knew Morihei Ueshiba Sensei through Omoto-kyo. When those people found out that I had done Aikido in Tokyo with the Founder they said “If that’s so then why don’t you try doing it here?”, so on November 23rd of that year I gave a demonstration at the Shinbukan (振武館) dojo, the oldest dojo in Kumamoto, with the support of the Kumamoto Nichinichi Shimbun (熊本日日新聞社). That was the beginning of Aikido in Kumamoto. After that, some of my supporters started to say “We have to build a dojo just for Aikido somewhere”. And that’s how this dojo came to be.

Q: So it seems that everything worked out on schedule.

A: Well, it wasn’t all quite that smooth. (laughing) But at that time there were three lieutenant generals of the army in Kumamoto Prefecture, and I think that the fact that they knew of Ueshiba Sensei’s Aikido was important. Especially Lieutenant General Koga, who had studied Aikido directly under Ueshiba Sensei at the Toyama Academy when he was a Lieutenant Commander, was of great help in promoting the teaching of Aikido.

Q: So Aikido was very rare in Kumamoto at that time? 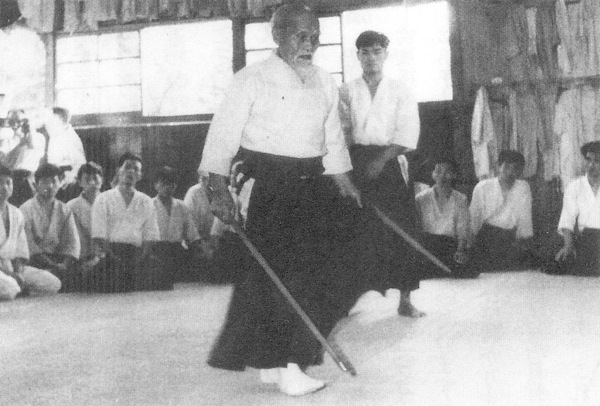 Morihei Ueshiba instructing at the Manseikan Dojo in 1961

Q: The Founder came to visit Kumamoto many times. Do you have any special memories from those times?

A: When he visited in Showa year 36 (1961) he gave a demonstration on television. Out of twelve minutes the Founder demonstrated for the last two minutes, so we had to fill the first ten minutes of demonstration time. The day before the demonstration when the four of us – Chiba-kun (Kazuo Chiba Shihan), who had come with the Founder, my sister, the Founder and myself were eating, I was told “I received a good souvenir”. When I asked what that was I was told “Kyushu techniques are the best”. 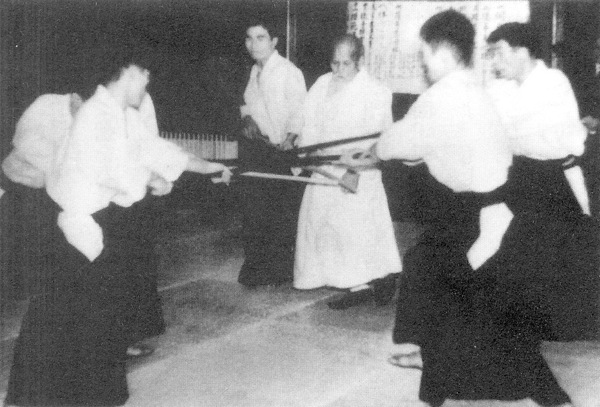 Morihei Ueshiba instructing at the Manseikan Dojo in 1961

Q: Why were they the best?

A: I’m sure that the techniques were fine, but I think that he was also impressed by my demonstration of a multiple attack. When he stopped in Osaka on the way to Tokyo he sent me a certificate for 9th Dan, which was the highest dan rank at the time, and a certificate appointing me the Shihan of Kyushu. As I was still in my thirties at the time I was greatly moved. I think that the Founder understood how important that was to me.