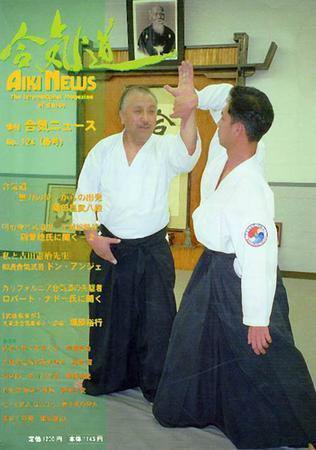 Masatake Fujita (藤田昌武) was born in Japanese occupied Manchuria in 1937. Returning to Japan after the war, he enrolled as a student at Aikikai Hombu Dojo – some of that story is told in Part 1 of the interview that is concluded below.

Fujita sensei summarized his technical approach to Aikido in this interview with Aikido Journal:

My “theory,” as you call it, involves certain principles of physical bodily movement that I’ve discovered by studying and thinking about O-Sensei’s techniques and movements. These could apply to any martial art, actually, and are not necessarily unique to aikido. To begin with, the primary purpose of body movement is to prevent yourself from being in a position where you can be thrown, hit, or otherwise successfully attacked. One way to do this is of course to duck or move back to escape, but aikido suggests that “entering” or moving in a bit is also good way to avoid being hit; this is the principle of irimi (lit. “entering with the body”). My “theory” is that the three most important elements in accomplishing this entry are 1) posture, 2) body shifting, and 3) technique, in that order.

An important member of the staff at Aikikai Hombu dojo for many years, as well as the technical director of the National Cultural Aikido Bond of the Netherlands, Fujita sensei was struck down by a brain stroke several years ago and spent a number of years in hospitals and rehabilitation until he passed away on May 28th 2014, at the age of 77.

This is the second part of an interview that originally appeared in the March 2005 issue of Gekkan Hiden (月刊秘伝 / “Secret Teachings Monthly”), a well known martial arts magazine in Japan. You may wish to read Part 1 of this interview before reading this section. 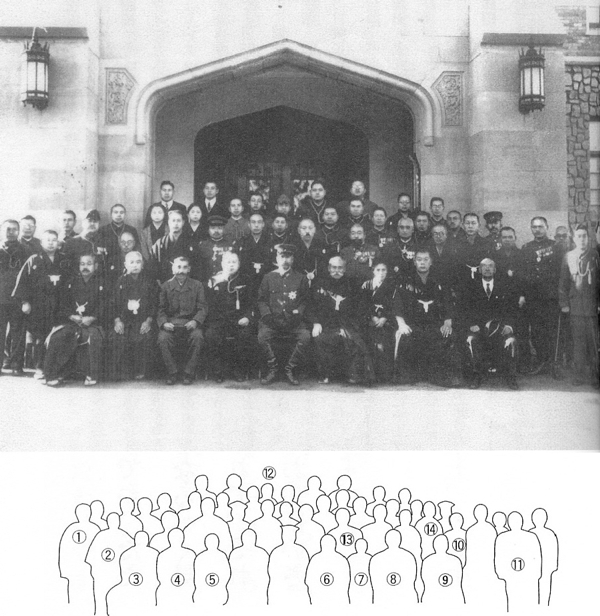 If the words are there then someone will follow.

Q: What was the Founder’s method of teaching like?

A: He’d appear suddenly, and then…bam! (laughing) Even if he taught something there was no time for training. He’d say “Hai, dozo!” and then change what he was doing in the next instant. There was nothing like any “you do it this way” kind of explanation. Rather than calling it instruction, it was more like he was giving a demonstration and telling you to steal it from there.

A: It’s really hard. For example, O-Sensei would come over to where everybody was talking. He’d slam on a technique, say “well…I guess it works like this”, and then just walk out. (laughing) He didn’t say “come at me” or anything. He’d be talking and the conversation would just turn into a movement, and before we knew it we’d have something applied to us and be sucked into him. There were many times like that.

Q: Many people spoke of being “pulled in”, did it feel like that?

A: Yes, there was no time to think, we’d just be drawn in and thrown naturally. It was a mysterious sensation.

Q: The Founder also taught Aikido to people other than the main students in the Dojo.

A: The Founder would hold “Aiki Gatherings” (合気の集まい). People who didn’t do Aikido would also participate, listening to O-Sensei’s lectures and watching his demonstrations.

Q: I’ve heard that you were the one running the tape recorder at those sessions…

A: That’s right. At that time the machine was still an open reel tape recorder about the size of a mikan (orange) crate. But when I held the microphone in front of his eyes he’d strike a pose and become formal. (laughing) So in order to record the natural voice of O-Sensei, as much as possible I tried to hold the microphone where he couldn’t see it and record him in secret. Then we would write it down and edit it for the Aikido Shimbun. Arikawa Shihan had a passion for that, and I would assist him, so I did the editing for both the Aikido Shimbun and “Aiki Shinzui” (合氣神髄 / published in Japanese in 2002).

A: No, no, I didn’t understand any of that stuff! (laughing) I really had to study hard. Also, when I was editing O-Sensei’s words it was especially difficult to determine which were the correct Kanji to use.

Q: It must have been very difficult to just listen to the lectures and then put it all together afterwards!

A: It was very difficult, so it took many years. It was especially difficult to transcribe the words from tape. It could lead you to a nervous breakdown! (laughing) I worked on it for a long time.

Q: What made you want to edit the words of the Founder?

A: At the time that O-Sensei passed away I thought that it would be a shame if they were not captured in some form, and that was my motivation. I thought that if O-Sensei’s words were preserved than there might be somebody who would be able to follow after them. 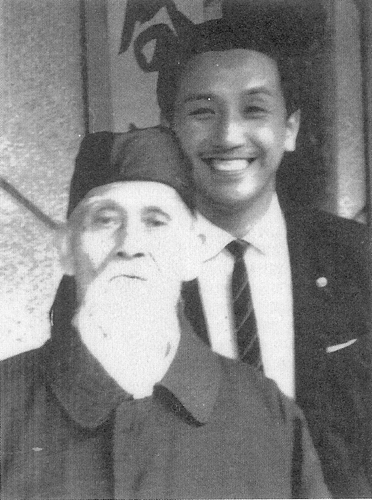 It felt as if we were grandfather and grandson.

Q: After you graduated from the University you took a job with the Shin-Seikatsu Undo Kyokai (新生活運動協会 / New Lifestyle Athletic Association).

A: Yes, it was an auxiliary organization of the  General Administrative Agency of the Cabinet (総理府). I had a lot of different job offers.

Q: Then, after working at the Shin-Seikatsu Undo Kyokai for seven years you left and began to work in the offices of the Aikikai Foundation.

A: That’s right. When I entered the office at Aikikai Hombu I was a fifth dan.

Q: At that time did the Founder speak to you intimately?

A: In my case, it was like that from the beginning! (laughing)

Q: You also worked as a secretary to O-Sensei.

A: For two years until O-Sensei passed away in Showa year 44 (1969) I stayed with him continuously, I left the work of the Aikikai office unattended and assisted O-Sensei. For example, when he said “Today we’ll do calligraphy” I would prepare the inkstone and large sheets of paper. O-Sensei like to write firmly on large sheets of paper. Also, O-Sensei liked Daifuku (大福 / rice cake stuffed with bean jam) and Omochi (お餅 / pounded rice cake), so he’d tell me “Fujita-kun, go buy some Omochi”.

Q: Aside from conversations about Budo, what did you usually talk about with O-Sensei?


A: It felt as if I and O-Sensei had a relationship that was more like a grandfather and his grandson then a teacher and a student, so O-Sensei was able to relax, he was able to keep a natural attitude. But O-Sensei would change his manner a little bit when he was with other people. (laughing)

Q: From our perspective, the image of O-Sensei as a god-like individual is quite strong.

A: He was completely different. To me, first of all it was as if I was his grandson and he was my grandfather….being a great person in Aikido came after that. So he wasn’t a psychic or anything like that….he didn’t leap over rooftops or anything. When O-Sensei was tired I would support him a little from behind, I would massage his shoulders and things like that.

Q: You really had a close relationship.

A: Yes, I don’t know how to say it, but I really felt like his grandson. When O-Sensei became angry he would get so angry that I’d wonder if he was going to die, but even then if I asked him “Sensei, shall I go buy some Daifuku?” he’d instantly say “Yes, please!”. (laughing) Perhaps it is slightly offensive to say this, but he had an innocent side. 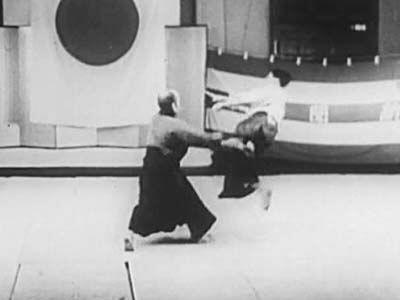 Q: In terms of technique, did you notice a change in the Founder while you were watching him?

A: No, there wasn’t really any change. That’s probably true even from before the war, because even when you watch the video tape from Showa year 12 (1937), the year I was born, that’s true (*Translator’s note: this is actually the Asahi News demonstration from 1935). However, there were some techniques from that period that are gone today. I am teaching those kinds of techniques now, but of course it’s difficult.

Q: So there are some things that have not been transmitted to the present day?

A: Yes, there are. The basic technical principles are the same, but there are difficult things – for example, winding the left and right hands in opposite directions, that have not been transmitted. That’s why they do not even have names.

Q: They didn’t have names?

A: O-Sensei did not name his techniques, so they have no names.

Q: And you are trying to recover these “nameless” techniques that have not been transmitted to the present day?

A: That’s right. That’s my work, that is to say, I feel that I have a responsibility to include this in my instruction. I think that it is distasteful that there are techniques that were done by O-Sensei that no longer exist.

Q: Similar to the work that you discussed previously, recording the words of the Founder.

A: I believe that if the words and the forms (kata) remain, then O-Sensei’s purpose, his feeling, continue to live, and can be inherited. In the end, that will be the work of future generations. 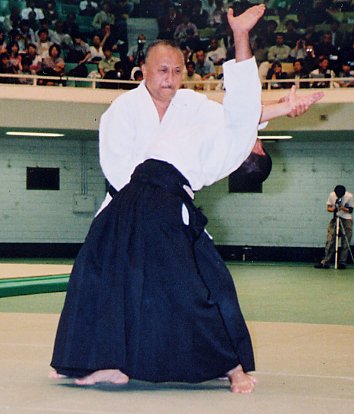 Q: You have been active in working for the spread of Aikido, do you think that there is something that is important for the continuation of Aikido?

A: There is a saying – “enter through the body and reach the spirit”. Aikido is a Budo that first comes alive with the unification of the body and mind. The words that were left behind by O-Sensei are extremely difficult, but while training your body correctly you will naturally come to understand. That is to say, a time will come when they are absorbed by the body. Put another way, this is because the body expresses the words. However, in order for that to happen we must vigorously preserve both the physical techniques and the words.

Q: What do you think your function is in today’s Aikido world?

A: My function is to create people who train and understand something, even a little, of the feelings of O-Sensei. This is not something that I just expect from those of high rank. Even among those of high rank, those who don’t understand don’t understand. There are many people who are practicing Aikido today but have never even read a single book about O-Sensei. But there are those who will come to study. The movements remain, so if the movements can be matched precisely with the way of thinking then O-Sensei’s purpose will remain. My function is to create that kind of person.

Q: Thank you very much for taking the time to speak with us today.