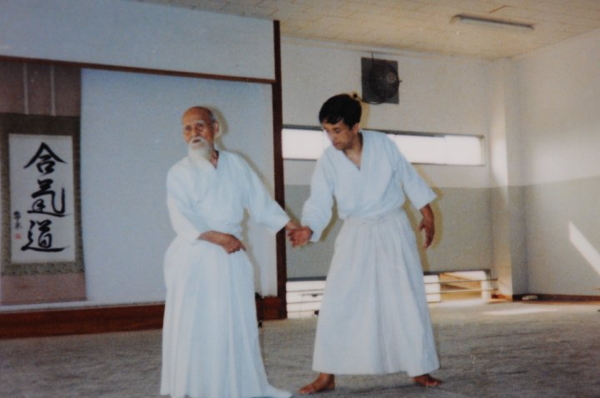 Masatake Fujita (藤田昌武) was born in Japanese occupied Manchuria in 1937. Returning to Japan after the war, he enrolled as a student at Aikikai Hombu Dojo – some of that story is told in the first section of the interview below.

Fujita sensei is famous for his powerful techniques. Here is what he said about the secret of those techniques when asked in Kuala Lumpur:

Of course there is a secret, but everyone is different. Even if I tell you what it is you may not be like me. It’s hard to talk about it. You have to experience it yourself. To watch someone do it and to do it yourself are 2 separate things. For eg., what you see through the lens of a camera may not be the same as what you see with the naked eye. You can’t learn just by copying someone else. You may be able to copy a technique but you may not grasp the essence of the technique.

An important member of the staff at Aikikai Hombu dojo for many years, as well as the technical director of the National Cultural Aikido Bond of the Netherlands, Fujita sensei was struck down by a brain stroke several years ago and spent a number of years in hospitals and rehabilitation until he passed away on May 28th 2014, at the age of 77. 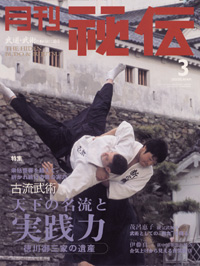 Masatake Fujita sensei on the cover of Gekkan Hiden, March 2005

Q: Let’s get right to it – I have heard that you were born in the former state of Manchukuo (Japanese occupied Manchurai), is that right?

A: That’s right – to be exact, in Shinkyo City in the former state of Manchukuo (currently the city of Changchun / 长春, in northeastern China), on April 21st of Showa year 12 (1937). At the time my father (Masakichi Fujita / 藤田昌吉) was employed as the secretary for the Manchurian Imperial Budo Association.

A: That’s right. My father was acquainted with O-Sensei from before I was born, and learned Aikido together with Tomiki (Kenji) Shihan and Mr. Tenryu (Saburo Wakuta / 和久田三郎).

Q: So, did you learn Budo right away?

A: No, not at all! (laughing) I lived in Manchuria until I was ten years old, and after the war, in Showa year 23 (1948), we returned to my father’s hometown Sapporo, in Hokkaido, and I didn’t really practice any Budo. My father didn’t encourage me to do Budo at all. Besides, at that time I thought that Budo was just something done by stupid people. I even said things like “People with tiny brains should try to balance that out by keeping their center of gravity low” to my father. (laughing)

Q: Is that right? (laughing)

A: I didn’t practice Budo, but I was a swimmer in Junior High School and High School. I even went as far as the Hokkaido Prefectural Championships. I only encountered Budo after I graduated from High School and went to Tokyo for school.

A: That’s right. Masatoshi Nakayama (中山正敏) sensei (Japan Karate Association / 日本空手協会) was at Takudai (Takushoku University) and said to me “Why don’t you do Karate?”. At Takudai during that time we were required to choose a Budo, and Nakayama sensei was in charge of the Karate classes. Well, my size and height were on the large side for that time, so maybe that’s why he invited me. But I intended to do Aikido, so I turned him down.

Q: Did you intend to start Aikido from the time that you first entered the university?

A: No, at first I didn’t have any interest in it. My father said “When you get to Tokyo go and pay your respects to Ueshiba sensei”, and gave me a letter of introduction, but I had a hard time getting together with the intermediary. In the end, I didn’t meet with O-Sensei until November.

Q: What was your impression of him the first time that you met?

A: Until that time I had thought of Aikido as some kind of incomplete Judo…I didn’t really know what it was, maybe something similar to that. For that reason, I didn’t have any particular preconceptions. O-Sensei’s speeches were full of references to the Gods, and I didn’t understand any of them, but in spite of that, he was O-Sensei. If you look at a picture of O-Sensei you can understand, but he was something different from other old men. I was young and brash, from O-Sensei’s perspective I was young enough to be his grandson, and at the moment I saw O-Sensei’s face I thought “If it’s something that this person does, then whatever it is it must be all right”.  So the next day I shut my mouth and enrolled at the dojo.

Before severe training we were friends.

Q: Who else was there when you started?

A: Hiroshi Tada Shihan (多田宏) Shihan, Shigenobu Okumura (奥村繁信) Shihan, and Sadateru Arikawa (有川定輝) Shihan were there. There was my Sempai by one year, Yasuo Kobayashi (小林保雄) Shihan. But now there aren’t many of them left. At that time it was more as if the number of people was decreasing rather than increasing. Anyway, it was as if everybody would celebrate “Hey, we lost one more!”. (laughing) Then the people remaining would say “You’re really hanging in there!” – that was the kind of time that it was. If you did it now you would get scolded, but the training back then was really severe. Once you were able to survive it was as if we said ” OK, we’ll let you be one of the group!”.

Q: The atmosphere today is quite different, isn’t it?

A: That’s right. I have heard that people called it things like “Hell Dojo” (地獄道場).  But it wasn’t that bad for me, because even though we called it severe, it’s not as if the purpose of the training was to cause injuries. That wouldn’t be any way to learn self-defense! (laughing) If you just accumulate injuries I don’t know why you’re doing Aikido. Becoming strong and sturdy so that you won’t be injured, conditioning yourself so that you won’t be damaged, this is self-defense (護身術). 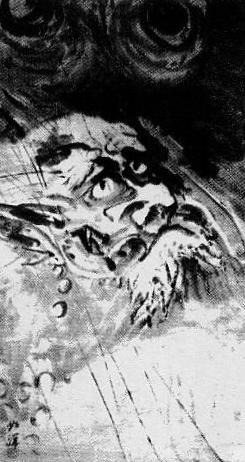 The “Dragon King” (天之叢雲九鬼さむはら竜王)
Here Morihei Ueshiba is portrayed as the “Dragon King”.
This portrait represents the unification of stillness and motion. 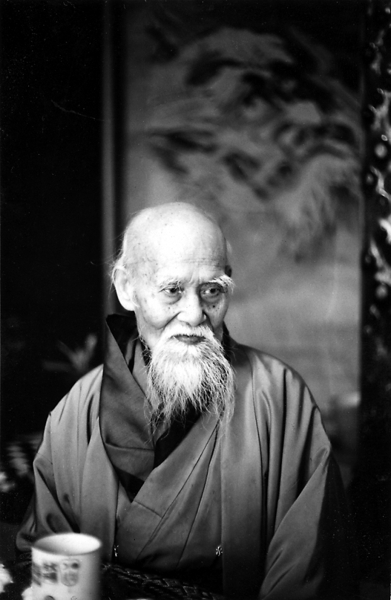 Aikido Founder Morihei Ueshiba in front of the Dragon King

Q: So you enrolled without knowing much about Aikido, did you have any problems after you enrolled?

A: At first I had problems because I couldn’t do ukemi. I was just starting, and I had never done Judo…maybe it was more comfortable for people who had done Judo before, like Kobayashi Shihan, who had done Judo since the time that he was in High School. I had no experience of any kind, so at first ukemi was really difficult.

A: Well, I’d just get tossed around. (laughing) I’m telling you – all the Sempai were really  scary! (laughing)

Q: (laughing) So you were always getting thrown?

A: No, not all the time. One of the special characteristics of Aikido is that the one applying the technique and the one having the attack applied to them take turns. So from that time the Sempai would be my partners, and I wouldn’t be the only one being thrown. I think that this is a valuable characteristic of Aikido.

Q: At the time that you enrolled you also practiced Judo and other Budo as part of the university curriculum, so it should be easy for you to make comparisons. Did you have any thoughts about that?

A: I thought that Aikido was completely different compared to other Budo. The training method of taking turns at ukemi is different. Also, and this is an important element, in Aikido there is no winning and losing – comparing oneself to another person isn’t a simple thing. Even in training, the Sempai take ukemi for you. In that way you remember the techniques and develop skill, and at the same time condition your body. I think that this is valuable, but I didn’t understand that as a rank beginner.

Q: In the university you learned other Bujutsu, did you ever feel as if you wanted to switch arts?

A: No, I never felt that way. Well, they didn’t match me personally. That was especially true for Karate, I just wasn’t very interested in combat sports that involved kicking and punching.

Q: You were involved in competitive sports during High School, when you engaged in swimming competitions. Didn’t you feel as if something was missing in moving from the competitive world to a non-competitive one?

A: I didn’t feel that way at all. Well, I think it may be that Aikido just matched my personality. When you compare swimming and Aikido they’re a little bit different, but when I remember swimming these days I’ve started to think “Aikido is like swimming in the air”. 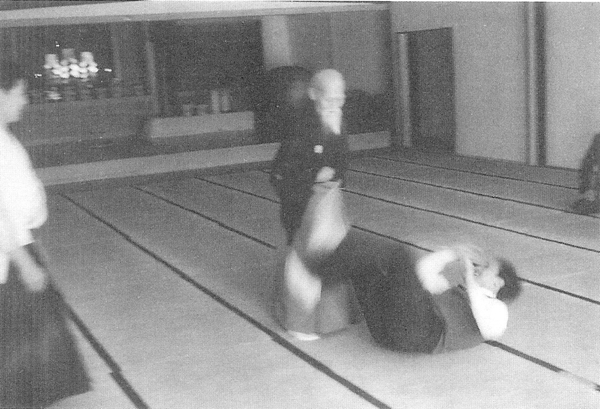 Q: What do you mean?

A: I mean that Aikido moves through the air. Without movement, there is no Aikido. If one is able to move smoothly through the air and ward off the opponent without collision, then I think that this is something like swimming through the air. Maybe I think this way because I used to swim. So recently I have started to think “it’s not as if there is no connection”. If you don’t swim in water then you will drown, and if you stop in Aikido then you will be hurt by the opponent.