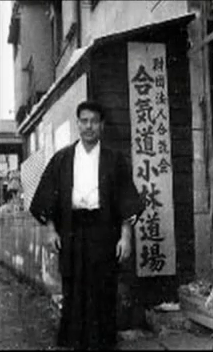 A Roundtable Discussion with the Kodaira Aikido Renmei

This is part 3 of an English translation of a round table discussion in Japanese from around 1988 with Yasuo Kobayashi and his younger sister, Fumiko Nakayama.

You may also wish to read:

Part 1, in which Kobayashi sensei discusses his interest in Japanese pro-wrestling, and a little bit about what training at old Aikikai Hombu Dojo was like in the 1950’s.

Part 2, in which Kobayashi sensei and Nakayama sensei discuss a little bit about the teaching methods at Aikikai Hombu Dojo in the 1950’s, and about the first public demonstrations of Aikido in Japan. 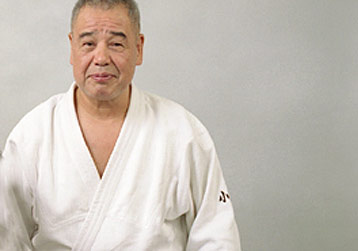 O-Sensei in His Twilight Years

Kobayashi: When he got lonely he would become sick. He was away in Iwama, and there was a Dojo in Iwama, but Saito sensei was still working for the railroad. There was somebody taking care of him, but we’d get phone calls “I’m critically ill, send someone here”. So I’d be told “You go!”, but when I got there he’d say “Thanks for coming – go warm my bath”. A lot of doctors would come to morning practice, so he’d pretend to be ill again. When you’re training even though you say that you don’t feel well you’d think that you wouldn’t show so many sword cuts. Shortly before he entered the hospital he was carried up the steps into the Dojo, but as soon as he was in the Dojo he’d suddenly be standing up, and moving and training as usual…

When we realized that he was truly feeling ill it was already too late.

Moderator: His liver, was he hospitalized for liver cancer?

Nakayama: Even then, he was still vigorous.

Moderator: That must be Ki. There are stories remaining from when Tesshu Yamaoka (山岡鉄舟) also trained shortly before he passed away.

Kobayashi: It must have been Ki, Ki-power. That’s the only possibility.

Moderator: In the practices before he passed away, did it still feel as if you were sinking into the tatami when your were thrown?

Kobayashi: At that time he had entered into the realm of Kata, we had experienced the changes up to that time, so it was okay, but it was a problem for people who only imitate that period.

Moderator: I’ve heard that he would throw without touching.

Moderator: Did he go abroad at that time?

Moderator: When did O-Sensei go to Hawaii?

Kobayashi: I think that it was Showa year 37 (1962). (*Note: O-Sensei actually came to Hawaii in 1961 to dedicate the opening of the Honolulu Aiki Dojo. He was accompanied by Koichi Tohei and Nobuyoshi Tamura. His grandson, Moriteru Ueshiba Doshu, and great-grandson, Mitsuteru Ueshiba Waka-Sensei came to Honolulu Hawaii in 2011 for “Aikido Celebration 2011”, the celebration of the 50th anniversary of O-Sensei’s visit to Hawaii)

Nakayama: All of us went to see him off.

Moderator: What was the ranking system at that time? I think that Nakayama sensei was promoted rather too slowly.

Kobayashi: Promotion was by recommendation only. Once a year.

Nakayama: In my time there were also Kyu ranks.

Moderator: Did Kyu ranking begin from that time?

Kobayashi: There were no Kyu ranks during my time, but they had them during your time? Kyu ranks were also by recommendation. From Showa year 33 (1958) Kyu ranks were instituted, and the uchi-deshi of the time would take ukemi – we took ukemi for all of the tests! Well, there were five or six people, but it would sometimes take as long as four hours.

Nakayama: I remember taking a Kyu test once.

Moderator: Sensei, was it after O-Sensei passed away that you opened a Dojo in Kodaira?

Kobayashi: No, that’s not right, it was the period when student athletics was growing. O-Sensei passed away on April 26th, Showa year 44 (1969). I opened the Dojo on the 7th or 8th.

Moderator: So that was before he passed away.

Kobayashi: I was worried about whether to open it or not, we didn’t know when he would pass away…

Moderator: Were there other private Dojo at that time?

Kobayashi: There were a few, but there weren’t many. It was the first case among the uchi-deshi. I did it without interfering with the Hombu times. That’s because Sunday was a holiday.

Moderator: There were Karate Dojo established at that time, but what about Aikido?

Nakayama: That was an age when people said “What’s Aikido?”.

Moderator: Nakayama sensei, around what year did your photo appear in “Shufu no Tomo” (主婦の友 / “The Housewife’s Friend”)?

Nakayama: I think that it was around Showa year 36 or 37 (1961 or 1962). From around that time I appeared in magazines and on TV for publicity purposes. I appeared in self-defense articles during the summer editions of “Josei Sebun” (女性セブン / “Women’s Seven”) and “Shufu no Tomo”, I also appeared once on “Afternoon Show” (アフタヌーンショー).

On Influences from Outside of Aikido

Moderator: So there were many events connected to the growth of Aikido, and now Kobayashi sensei has many Dojo in Japan and abroad. It must have taken a great effort to reach this point. Was there some kind of inner, or spiritual, training that supported you to this point? We have countless books, and things like the Ichikukai and Tempu Nakamura, but what about things in that area? First of all, how did you first begin Budo?

Kobayashi: There was a Koban (Police Box) in front of our family’s home. One of the police officers there from Kyushu did Judo, and often came to visit our house – he’d say “Do Judo, Do Judo”, so I went to the Koujimachi (麹町) Police Station. I went at an odd time, and there wasn’t anybody else beginning just then. They had me do ukemi two or three times, then told me “You’re no good, go home”… (laughing) It was really frustrating. After that my father told me to go to the Kodokan (講道館) in Suidobashi and I threw myself into it completely… After that I started Aikido. Up until that time my range of experience was rather narrow. When I entered Hombu Dojo there were many different people there from all over the country. Even among people of the same age there were people whose opinions and way of thinking about things was different, and it was really interesting. You could say that those things made me sink into Aikido – of course the techniques are fascinating, but that was also one reason. Many of those people came from places like the Tempukai. 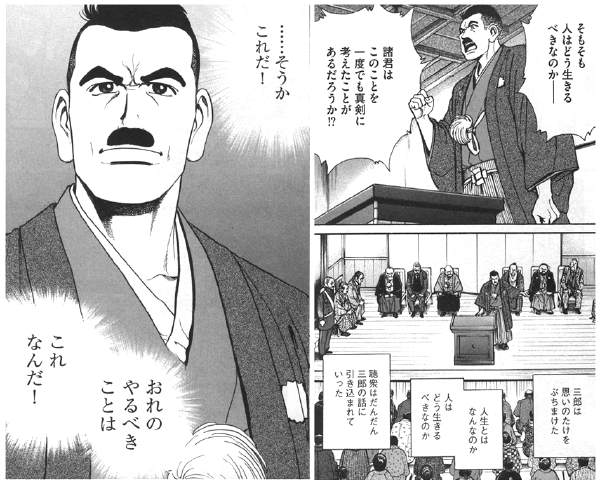 From “The Legend of Nakamura Tempu” manga, published by the Tempukai (Kodansha)

Moderator: Was the Tempukai first?

Moderator: Did you go to them in order to support your Aikido?

Moderator: Are there some facets of your Aikido that have been influenced by these things? 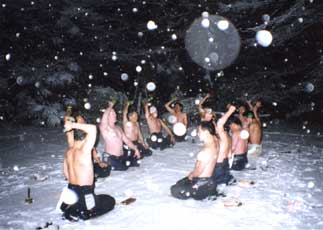 Winter training with the Ichikukai

Kobayashi: I suppose that there are. Physically, I received a powerful impression from the Ichikukai. Pushing myself to my limits, learning the extent of endurance, and so forth. The mental facets have been influenced by the teachings of the Tempukai. They say to keep a positive spirit. Health is from Nishi Shiki. Even now I use their system of showering.

Nakayama: The Ichikukai was really amazing. You would lose your voice after the practices.

Moderator: Nakayama sensei, did you go too?

Nakayama: I didn’t go. After watching my older brother I really didn’t feel inclined. I did go to the Tempukai.

Kobayashi: I think that most people from that time went.

Moderator: Tempu sensei was a fascinating individual, wasn’t he?

Kobayashi: He was amazing. However, we didn’t have much time for face to face contact. Enough for it to sink in… That would be in the evening. Sometimes during the day. And I also went to the summer training sessions.

Moderator: So those things have continued to live within and enrich you to the current day. Sensei, was it because you wanted to become strong that you first set your sights on Budo?

Nakayama: We really worked hard. Using white belts as a net and carrying stones, making slides and tying our feet together to work the abdominal muscles, we really trained hard. As if that were the only skill we had.

Kobayashi: We trained hard, didn’t we?

Moderator: Why don’t you ask for that from the current uchi-deshi?

Kobayashi: It’s okay if they start in their twenties, but when they start around thirty…it’s not an age for hard conditioning, I guess.

Moderator: (laughing) What about students?

Kobayashi: The students do it.

Moderator: Was there anybody studying Iai?

Kobayashi: There were several people, I think. They wanted to get the hang of using a sword through Iai.

Moderator: There are deep connections to the Yushinkan (有信館, the Dojo of Hakudo Nakayama), that connection still continues, doesn’t it? Aikido has a really broad range, and I think that is sometimes fascinating for people from other Budo.

To Students of Aikido Everywhere

Kobayashi: Hmm, don’t be too strict in defining what Aikido is. People who want to train hard should train hard, people who want to do flowing training should do that, but don’t do Judo and call it Aikido. It’s interesting when you go abroad. When you do that the people who match the region remain as instructors, and the techniques match as well.

Moderator: In the same vein, could we have the woman’s point of view?

Nakayama: I would like women to do more womanly Aikido, that is my current desire.

Moderator: Is that softer or something?

Nakayama: Something like finding severity in the midst of softness.

Moderator: Not as self defense, for Aikido as Aikido.

Nakayama: That’s right. If you do Aikido than you will naturally master the ability for self defense, so I don’t believe that it’s necessary to separate the two in our thinking. The mental facets are developed in the midst of doing Aikido, such as being able to manage your household affairs well… Even now I myself study how to become that kind of a human-being in the midst of my training.

Kobayashi: So, I don’t think that it is a matter of a human being changing because they do Aikido, I think that it is through Aikido that you meet many different people as well as developing relationships with people better than yourself, and that you change through those experiences. If there is one thing that I alone would like many people to do then that is it.

Moderator: Thank you very much for taking your imporatant time today, in the midst of your busy schedules, to allow us to to hear this valuable information. We conclude this interview with our deepest wishes for the future prosperity of Kobayashi Dojo and the Kodaira Aikido Renmei.

(From “Aiki Kodaira”, published for the 10th anniversary of the Kodaira Aikido Renmei – October 30th, 1988)