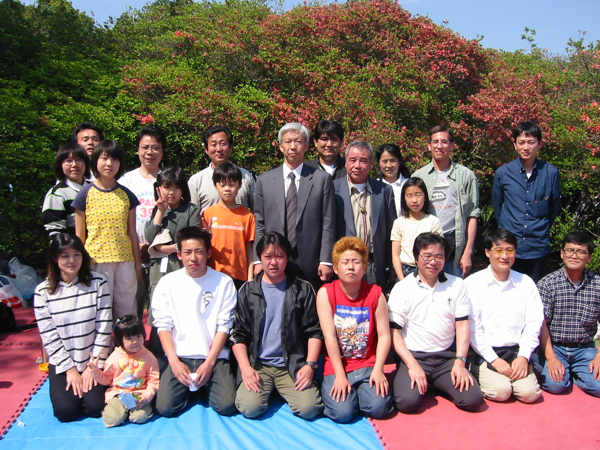 A Roundtable Discussion with the Kodaira Aikido Renmei

This is the English translation of a round table discussion in Japanese from around 1988 with Aikido Shihan Yasuo Kobayashi and his younger sister, Fumiko Nakayama sensei, who was a favorite of Aikido Founder Morihei Ueshiba O-Sensei.

I first met Yasuo Kobayashi in the late 1980’s in Colorado, where Mitsugi Saotome had invited him to be a guest instructor at the Aikido Schools of Ueshiba summer camp. Some years later I would end up training with one of his students, Hiroyuki Hasegawa, while living in Saitama. Hasegawa sensei’s relationship with Kobayashi Dojo was on and off during that period, but every time I ran into Kobayashi sensei he would treat me with courtesy and kindness.

Yasuo Kobayashi was born in Tokyo in 1936 and would start training in Aikido in 1954 at the old Aikikai Hombu Dojo in Wakamatsu-cho. He currently heads a group of some 120 dojo affiliated with the Aikikai Foundation under the banner of Aikido Kobayashi Dojo, which forms a substantial portion of the backbone of the Aikikai in the Kanto region of Eastern Japan. Some people have called Kobayashi Dojo “the Aikikai within the Aikikai”.

For those interested in more information, “Aikido, My Way“, the Story of Kobayashi Dojos, is available in English on the Aikido Kobayashi Dojo website. 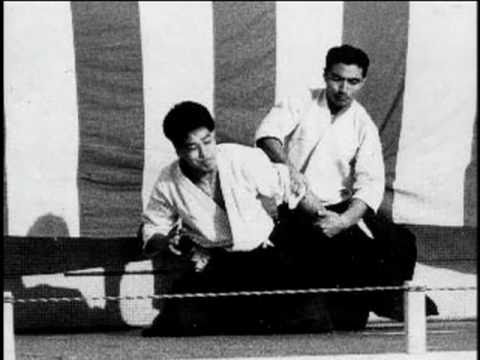 Moderator: The Kodaira Aikido Renmei is commemorating its tenth anniversary, and will be publishing a commemorative brochure. Today we would like to speak with Yasuo Kobayashi sensei and Fumiko Nakayama sensei about their personal Aikido histories and their reminiscences of Morihei Ueshiba O-Sensei.

First of all, Kobayashi sensei – when did you first begin?

Kobayashi: That was when I entered the university, so I was eighteen. The spring of my eighteenth year, Showa year 30 (1955), I think that I went to see Aikido around the time that I finished high school…

At the Kodokan I had become friends with the son of an Iaido instructor, Dansaki sensei (壇崎), and he said that there was this kind of Budo, and that we should go see it.

So I was invited, and went to go see it – after I finished my entrance examinations and entered the university I decided that I wanted to try it.

Moderator: Was it still the old one story building at that time?

Kobayashi: The old building was about seventy tatami in size. In one section war refugees were borrowing six tatami sections each. Those people were still there. When I started it was all covered with tatami, but when (Ikuo) Iimura sensei (飯村郁男) and those people started it seems that there were still some bare wooden floors left. 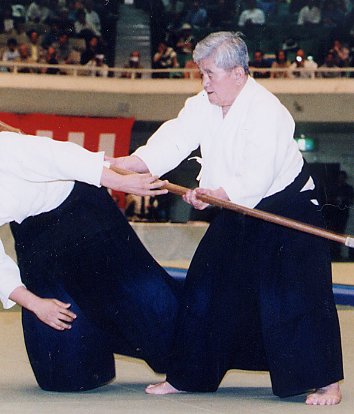 Moderator: Iimura sensei also started after the war, didn’t he?

Kobayashi: I think that’s right. Wasn’t it around Showa year 24 or 25 (1949 or 1950)? The earliest one was Arikawa sensei, after that maybe Yamaguchi sensei and Tada sensei. After that was our generation, with Tamura sempai, who’s in France, and the other uchi-deshi who have scattered around the world.

Moderator: Around what year was that?

Kobayashi: Those who started from around Showa year 29 (1954) to Showa year 35 (1965) are now acting around the world as the backbone of the Aikikai.

Moderator: I have heard that prior to that time students were not allowed to enroll, was it about thirty years ago that this became permitted?

Kobayashi: That’s right. At that time things were centered around Doshu (Ni-Dai Kisshomaru sensei), Morihei O-Sensei was in Iwama and was mostly absent. Doshu was still working, and I think that Tohei sensei (Koichi Tohei / 藤平光一) had gone to Hawaii.

Moderator: Was that his first trip to Hawaii?

Nakayama: I think that was his second trip.

Kobayashi: Anyway, I heard about him, but I didn’t know anything of Tohei sensei for about six months.

Moderator: Who was leading the practices?

Moderator: Did you have a fascination for the training?

Kobayashi: I did Judo, but the style of Aikido was different, and it was interesting.

Moderator: Was it the strength that you found interesting? 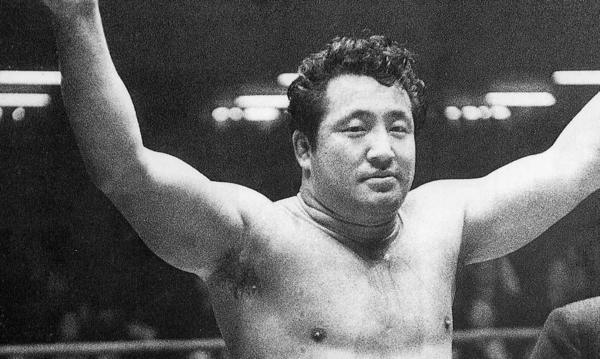 The Korean wrestler Rikidozan, known as the “Father of Puroresu” in Japan

Kobayashi: That was just the time of the pro-wrestling boom with Rikidozan (力道山), you know. Well, there’s nothing in Judo like the way we throw people over and over, and the style of training is different – I thought that I had never seen or experienced a training style like that before and it was interesting.

Moderator: Is that right? That was just when they were beginning to put televisions out on the street for people to watch. 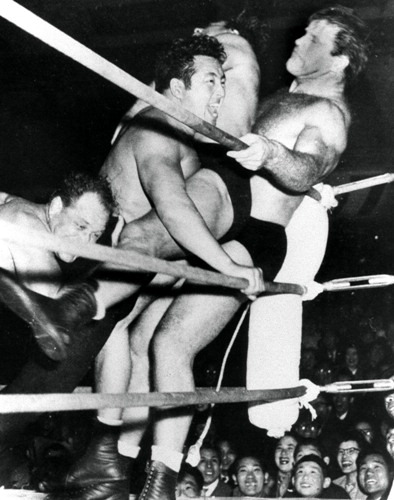 Ben and Mike Sharpe, Canadian pro-wrestlers
With Rikidozan and Masahiko Kimura in 1954

Kobayashi: And the Sharpe brothers (シャープ兄弟), too. (explosive laughter)

Moderator: What about women at that time?

Nakayama: There were very few women at that time.

Kobayashi: Maybe just one or two.

Moderators: Who are your contemporaries from that time?

Kobayashi: Of those still remaining, there are Yamaguchi sensei and Tada sensei who started before me, and Tamura sempai in France. Then there is Asai sensei in Germany. After that there’s me, Mitsugi Saotome in America, and then about two years later Yamada in America, Chiba, Kanai, all uchi-deshi. Sugano was there too, he would commute to the Dojo.

Moderator: Was the training method then different than it is now?

Kobayashi: It was exactly the same, the same, but joint techniques, techniques that twisted and strengthened the joints, were the most common. To my recollection, techniques like Kokyu-nage were only done after we started giving demonstrations.

Since it would be just unbearable to watch everyone do Ikkyo or Nikyo (in a demonstration) they created techniques that could be done with a single movement. So, if you did those techniques in front of Ueshiba O-Sensei you would be scolded. He’d say things like – it’s just impossible to throw anybody that way.

Moderator: Did O-Sensei use those kinds of techniques?

Kobayashi: He would do techniques that were similar to Irimi-nage, but we were just imitating those things for the demonstrations. So if we did those things during training we would be scolded.

Moderator: Did you practice those things when you were training on your own?

Kobayashi: Yes, that’s right. When sensei came out it would be the end of the demonstration, so we were doing those things when he wasn’t there.

Moderator: How about the training?

Nakayama: The focus was on zagi (seated) techniques. 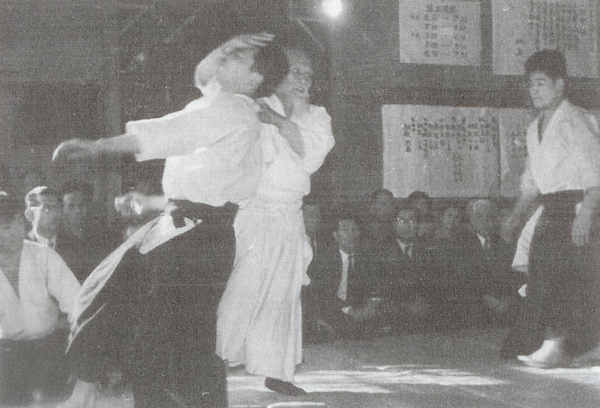 The Founder O-Sensei’s Lifestyle in Tokyo

Moderator: How often did the Founder O-Sensei come to Tokyo at that time.

Kobayashi: I can’t really say. He’d appear if he got the urge, there were also times when he didn’t train, and towards the end he’d pop-in suddenly now and then. He’d come out to practice, do what he wanted, and then just talk the rest of the time away, I can’t really say how much he was there.

The current system of training five times a day started around Showa year 32 (1957). Until then there was only training in the morning and the evening, with some special individual training in the in-between times.

Moderator: Was the individual training voluntary?

Kobayashi: No, the uchi-deshi were just rambling around, so in the off-times there would be individual instruction.

Moderater: Were you permitted to attend all of the classes?

Moderator: How many people were commuting to the classes at that time (*people who did not live in the dojo)?

Kobayashi: At one practice there would be about 15 people at the most.

Moderator: Is that all?

Kobayashi: Between 10 and 15 people, as time went on the numbers increased, of course.

Moderator: Were there about the same number of commuting students and uchi-deshi?

Kobayashi: Yes, but of course there were more uchi-deshi there in the mornings.

Kobayashi: Yes, there was no organization or system of instructors, so when Doshu wasn’t there one of the uchi-deshi was just told to go do it.

Moderator: You had graduated from the university.

Kobayashi: That’s right, so when there was no instructor and I was asked if I had free time I’d just drift into it. There weren’t so many people living there as uchi-deshi and planning to become professionals in Aikido. People would stay there and then commute to school or their companies. Depending upon the circumstances people would be there for two or three months, or sometimes you’d wake up in the morning and someone would be sleeping next to you.

Kobayashi: Those who were not training to be professionals would pay. Just as foreigners pay when they train at my Dojo. From there they would go to work or school – there were many people like that.

Moderator: How much was the regular tuition at that time?

Kobayashi: Around 300 yen. When I was a student it was a time when a cup of coffee cost 30 yen!

Moderator: That was quite expensive.

Kobayashi: It didn’t seem that expensive at the time.

Moderator: How much was your first salary?

Kobayashi: At the time a university graduate made around 13,800 per month.

Nakayama: That was a time when you’d have croquettes today and then croquettes again the next day.

Moderator: At that time you were training in the old Dojo, weren’t you?