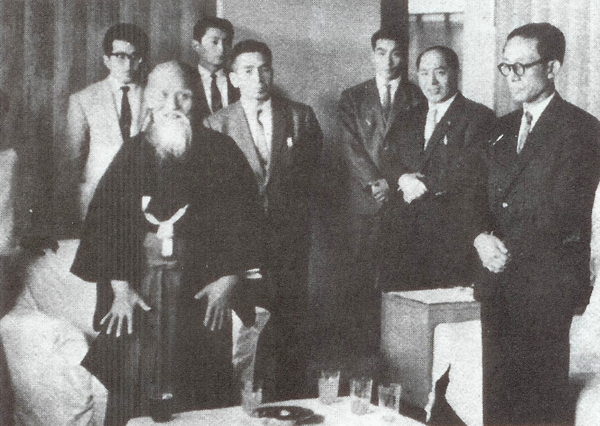 Morihei Ueshiba O-Sensei in 1961, directly before leaving for Hawaii
Hiroshi Kato Sensei by the door next to Kisaburo Osawa Sensei

He was one of the early post-war Aikido students at Aikikai Hombu Dojo, but chose to work as a printer rather than making a full time career of the martial art. Known for his strict self-training in Aikido, in his younger years he would practice weapons by himself through the night, greet the sunrise the next morning, and then head off to work at the print shop.

This is the second part of a two part interview with Hiroshi Kato that originally appeared in the April 2007 issue of Gekkan Hiden (月刊秘伝 / “Secret Teachings Monthly”), a well known martial arts magazine in Japan. You may wish to read Part 1 of this interview before reading this section 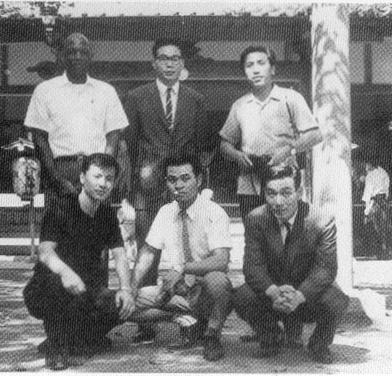 That feeling that I absorbed, that is my treasure.

Q: I think that the “Harmony” (和) that we were just discussing is related to the “discarding oneself” of spiritual training (“gyo”). Does an image of the Founder come into your mind at those times?

A: Certainly it does – O-Sensei’s image comes forth even while I’m sleeping, and the intensity is shattering!

Q: How does he appear?

A: Hmm….he appears standing up. From there many things flow through my mind – so you see, inside of me O-Sensei has not yet passed away. I am happy just to have him beside me.

Q: He has a quite cantankerous image, doesn’t he?

Q: What kind of things did he become angry about?

A: When he was in a bad mood, about anything. (laughing) But he was always watching. When we trained there were some people who were very strong, and when it became too much trouble I would fly into a fall whether or not I was touched. When that happened I would hear his voice yelling “Just falling over when you’re touched is no way to train!”. He was able to sense when our intensity had fled. But he made no other explanations, so how to interpret that was the responsibility of the students.

Q: Did you ever travel together?

A: Once, when I went to Iwama at the beginning of the new year I was told “the old man is going back to Tokyo, so go with him as his Otomo (“attendant”)”, so I returned with him to Hombu Dojo. After all, I couldn’t refuse – it was really exhausting. (laughing)

Q: (laughing) Being with him wasn’t enjoyable?

A: Being together for hours on end was really something. (laughing) I was on pins and needles the entire time, and he walked really quickly. That eighty year old man would just slip right through the crowds. I was carrying the tickets, so I somehow kept up, but I became drenched in a cold sweat. That was really intensive training in Ashi-sabaki, Tai-sabaki and Irimi! By some miracle I just managed to stay with him. I think that the thread connecting our feelings didn’t get cut, so I was able to follow along right after him. If I had thought about it with my head then I wouldn’t have been able to do it. I really learned something that day.

Q: I guess that there were no hitches in his movement?

Q: He was right there?

A: Yes. Everybody just sat there with their mouths open. Whether it is Sen-sen-no-sen or Go-no-sen, they are all strategies with a hitch in them, relative strategies applied in relation to the opponent. But O-Sensei said “That’s not it. When you move right in it’s finished.”. I think so also. 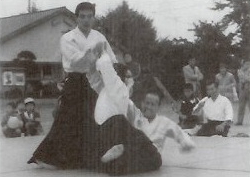 Q: Did O-Sensei teach you anything in particular about movement?

Q: What was it like to take ukemi for the Founder?

A: He was the easiest person to take ukemi for. He would throw with the flow and wouldn’t allow you to be injured. But it was frightening. You could see the ceiling, turning completely upside down as you fell. I thought “I hate being this scared”. But it was a great feeling, it was inspirational. Even now I can remember the feel of his touch. That is my treasure. It was from those times that I able to learn that Aikido has no competitive matches through feeling it with my own senses.

Q: Is that because he met you so strongly?

A: That’s not it. I was completely absorbed “This is Aikido!” – I had understood the theory, but there I was able to actually experience it.

Q: Did you clash against each other during the practices?

A: That’s because two people who won’t fall are doing it together. It is the same way that water gradually smoothes a rough stone into a round one. However, in the midst of that one must show them “it’s actually different, you know”, or the path will be cut, and people will think “is that it?”. Aren’t there a lot of people like that? In reality, people don’t really fall down that easily, you know. That’s a delusion. That way is enjoyable, but at some point your eyes will be opened. I myself spent year after year in delusion. But when one starts to glimpse some of the truth they will understand. Throwing another person is not that easy. If you think about throwing them and become stiff then it won’t work. Make yourself comfortable. Once a person who was a boxer suddenly threw an uppercut during practice, (laughing) but I handled them naturally. When one’s training is soft and adaptable it will come out. It’s because I am moving comfortably that the hitches dissappear and I am able to move.

Q: Do it comfortably….

A: It’s difficult! How many years do you think that I’ve been doing this? (laughing) In order to do this you must understand three things.

A: First and most important is to know the past. Study history. Next is knowledge of current conditions. And finally, to enact the future. When I say knowledge of current conditions – for example, if you are a person with about the same amount of strength as I have then strategy and tactics are necessary. But in the future, the dream and goal of mankind to eliminate the need for that will require effort. I favor the elimination of that need, and that is what I strive for. That is why it is difficult. This is more difficult than winning or losing. 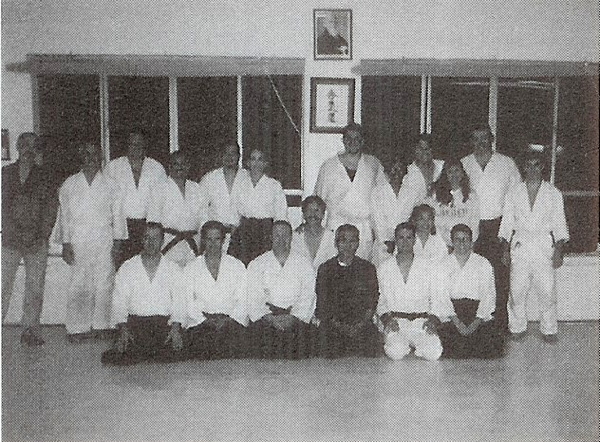 You can’t just like it, you have to fall in love with it.

Q: Could we hear some more about the teachings of the Founder?

A: He didn’t really speak in much detail. However, although it is often said that O-Sensei didn’t teach, and I think that is not the case. There was a certain way of teaching….I think that his way of teaching was really the best.

A: Showing the best thing. Showing it in action, showing its atmosphere. It’s not a matter of showing how to throw. After watching the movements of the Founder, what each person took away was left up to their own abilities and study. Put another way, depending upon how one looked at the Founder everything was different. Even just one swing of the bokken was completely different, you know. But I think that the reason why I continue in Aikido even now is because I saw the Founder performing the best movements, and was touched by his hand.

A: There were no explanations of O-Sensei’s technique, because he only talked about the gods. Like “Aikido came from Heaven”. However, that’s also a good thing, because there are times one can think “this wasn’t something made by man, so there will some parts that are just a mystery”.

Q: What did you think at the time when you heard those kinds of speeches?

A: I didn’t understand. (laughing) Those people who came in through a relationship with religion tried to look as if they understood, but the important things were not to be understood through words. That’s because they were to be expressed in your own body through your practice.

Q: So it’s meaningless to try and study theory?

A: I suppose that there’s some value to study, but there must be something that oozes out of your body. I think that must be Aikido? I feel that people today more or less understand this. But I didn’t dislike his speeches. I didn’t understand them, but I felt as if they were something important.

Q: If a time comes to understand will one understand?

A: Maybe it’s okay not to understand. It is just my ideal to be able to think “I have something wonderful”, since O-Sensei’s form, his image, is inside my head.

Q: What is the image of the Founder that has stayed with you the most?

A: What can I say, something wonderful. Something like the Buddha in the background…. Whatever it is, for me he is absolutely a Kami-sama. I am happy just that there was someone who was able to make me feel that way. I can’t take his place, though. (laughing) Whether or not one believes in the gods, when there is a dream like that, doesn’t that become one’s ideal?

Q: What is your maximum effort?

A: I must express myself so that I can leave everyone with the impression that “Aikido is a wonderful thing”. I think that is the responsibility of those people who have taken the hand of O-Sensei. Of course, within that there have been many changes. In times past I thought “I don’t have to do this kind of stuff, I’ll just toss them!”. (laughing)

Q: You have also gone through many changes yourself, haven’t you? (laughing)

A: One thing that I remember well from O-Sensei’s lectures is when he said “I don’t have even a single student”. We thought that we were students, though. (laughing) But when we said “Is that so?” then he would say “But I have many companions” (仲間). 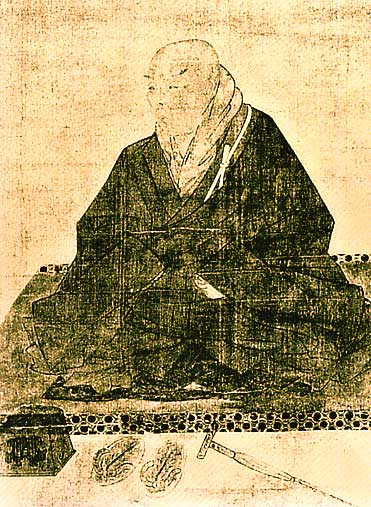 A: I think that Shinran (親鸞, the Founder of Jodo Shinshu Buddhism) said it too, he called them “companions” (同行の士). I think that is a good way to put it, so I think the same way. I am at the top of the teaching structure, but we are all companions. Someone who appears suddenly and teaches something that people like so much that they follow him in silence must be a Founder.

Q: Did you feel that with the Founder?

A: I did, yes. People are different, but I felt that way.