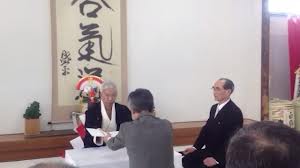 Hironobu Yamada, Shihan of the Hokuso Aikikai (北総合気会) and the Yachimata Aikido Association (八街合氣道友会) in Chiba prefecture, started training with Hiroshi Tada sensei in 1963 at his dojo in Jiyugaoka.

Hiroshi Tada (多田 宏) was born in Tokyo on December 13, 1929. Originally a member of the Waseda University Karate Club , and a student of Shotokan Karate founder Gichin Funakoshi, he began training with Aikido Founder Morihei Ueshiba O-Sensei in 1948. The events leading up to his enrollment in Ueshiba Dojo and his first encounter with O-Sensei can be found in the article “Aikido Shihan Hiroshi Tada: The Day I Entered Ueshiba Dojo“.

You may also be interested in an eight part interview with Hiroshi Tada sensei conducted by Tatsuro Uchida – “Aikido Shihan Hiroshi Tada: The Budo Body”:

This is the first part of the English translation of a lecture given by Hiroshi Tada sensei at the 15th anniversary of the Yachimata Aikido Association on September 26th 2004. 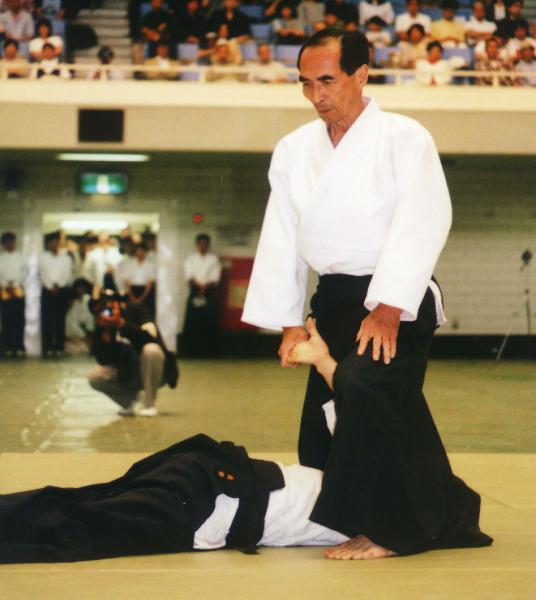 Today I will talk about a number of things. Those of you who are used to listening to me will understand, but those of you who are not used to listening to me may not understand what I am talking about. Even among the students at Tokyo University who have listened to my talks for four years and then two years more in graduate school there are those who tell me that it is not until much later on that they finally understood those lectures.

In Italy we have been holding these types of seminars for thirty years. This year it is forty years since the Italian Aikikai was established in 1964, but we weren’t able to hold the summer seminars in the beginning. There weren’t enough students. That’s because we started from zero. Four years later in 1968 we held the first international seminar and have continued to this day.

Well then, there are two methods of training in Aikido.

Everybody understands the latter, but even Japanese people do not understand the origin of Aikido technique.

I would like to turn my attention to these topics in today’s lecture.

In foreign countries 気の錬磨 is spoken of as “Ki no Renma”. This term is generally understood in Germany, Switzerland, Italy and even other places.

The word “Aiki” is well known, but people use the term “Aiki” in many different ways. What we are speaking of in Aikido is “Shinjin Aiki” (神人合気).

This means “Forging an enlightened person through the Aiki of God and Man” (神と人との合気による真の人を練る).

The phrase “Shinjin Aiki” (神人合気) is the Shinto way of expressing this concept. 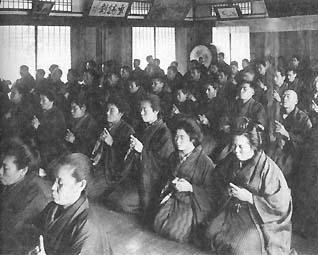 Shugyo is for the purpose of uniting God and Man (神人合一). The quality of God and Man is the same, but as they are of varying measures Man cannot by themselves surpass their own limitations. However, martial spirit creates a complement between Heaven and Earth. Then, a wonderful result emerges. If one were to summarize the training method of a beginning Shugyo-sha in a single sentence it would be “Make the transformation of the martial body a glorious Way without end. As the whole is inferred from the one in the Way, take charge of creating all methods from the one and forging the (grass cutting) sword”.

*Translator’s Notes: the text referring to the sword actually says “ten thousand swords”, and this is how it was translated by John Stevens in a very similar passage from “Budo”, which duplicates the single sentence summary of the training method given by Morihei Ueshiba above. However, the same characters can also mean a two edged straight sword carried by Korean soldiers which was imported to Japan. Further, this is the same shape as the “Kusanagi no tsurugi” (草薙の剣), or “grass cutting” sword that was often referred to by Morihei Ueshiba in very similar quotations.  That was the sword about which Morihei Ueshiba said “Aiki is the name of the sword wielded by the Great Diety Susanoo”, and whose two edges he characterized as representing Heaven and Earth (Yin and Yang).

Lastly, the section on “the transformation of the martial body” is missing in the Stevens translation, although it is present in the original text from “Budo”.

Here is the John Stevens’ translation of the single sentence summary of the training method of a beginning Shugyo-sha. The final sentence of the passage below relating to the mind does not appear in the text quoted above, but it does appear in “Budo”:

The best strategy relies upon unlimited responses. Pursue the Glorious path, use the one to strike the many, and then the one will open the way to ten thousand vital principles; forge ten thousand swords, take charge, and attain the ultimate. Always keep the mind as bright and clear as the vast sky, the great ocean, and the highest mountain, empty of all thoughts.

Here is the text from the 1938 manual “Budo” in modern Japanese:

And here is the original text from the 1938 manual “Budo”:

Stated in Buddhist terms this would be “Bonga Ichinyo” (“I am Brahman” / “Aham brahmasmi” / 梵我一如 – one of the favorite phrases of Shumei Okawa, a close friend of Morihei Ueshiba). 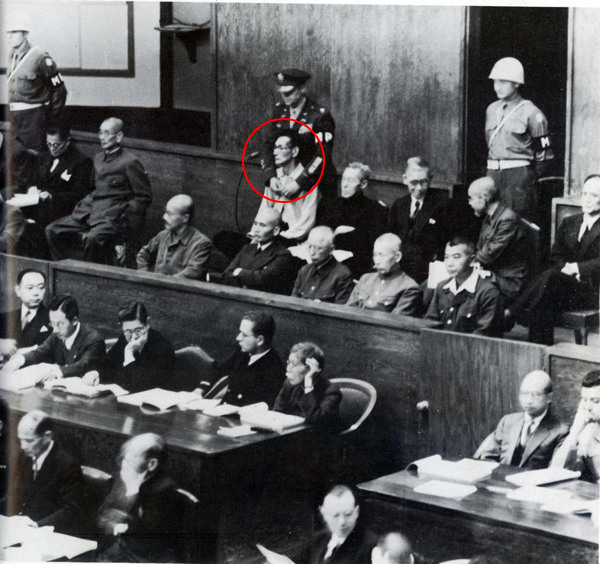 If 梵 is “Brahman” and 我 is “Atman, than this is a typical expression of the Indian ancients. Brahman, the creator of the universe, and I are one. This is the idea that we are the same thing.

In Hinduism, Brahman (ब्रह्मन् brahman) is “the unchanging reality amidst and beyond the world”, which “cannot be exactly defined”. It has been described in Sanskrit as Sat-cit-ānanda (being-consciousness-bliss) and as the highest reality.

The word Ātman (Sanskrit: आत्मन्) or Atta (Pāli) refers to a self. Occasionally the terms “soul” or “ego” are also used. The words ātman and atta derive from the Indo-European root *ēt-men (breath) and are cognate with Old English æthm, German Atem, and Greek atmo-.

Well then, if we talk about what a human being is, Mr. Goi (五井昌久) of the Byakko Shinko Kai (白光真光会), who welcomed O-sensei when he visited, would say say that it is a “Wake-mitama” (“divided spirit” / 分霊). In other words, if we look at the enormity of the universe, it is the view of something that has been divided from that life.  So of course, it is something that cannot be separated. When we see the Kanji we understand immediately, but foreigners have a difficult time understanding this. It is difficult this to explain this in places like Europe.

*Translator’s Note: “Wake-mitama” is a process through which a Kami is moved to a new location by dividing it in two, leaving two complete copies that are both identical to the original.

There are many ways of thinking about what Aikido is. When we listened to O-Sensei he would say “Aikido is not the same as Bujutsu – competition between people, fighting, that age is over”, and towards the end of the war he would say “It is because we were doing those things that we are here today”.  This is the idea of transcending Bujutsu.

Another way of saying this is that Aikido has reached the pinnacle of Bujutsu. When one reaches this pinnacle one may let the opponent live or die at will.

In the midst of wartime, of course, the military desired to make use of this. According to what O-Sensei told me directly, in Showa year 18 (1943) there was a proposal to eliminate all other Budo and spread Aikido alone, since there was nothing as useful in close combat as Aikido.

You see, most people don’t even defeat a single person on the battlefield. However, there were some exceptional cases of military exploits. Looking at the statistics, those were all students of Morihei Ueshiba. It was the use of the sword of Aiki. Of course, it was not Aiki techniques. In the past most of the students were students of either Kendo or Judo, so they were probably Kendo students. They understood the feeling of Aiki while wielding a sword. 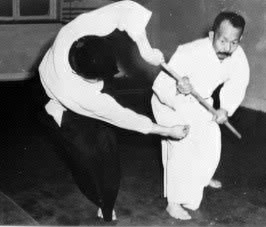 When Aritoshi Murashige sensei (村重有利) was serving in the army in China they were attacked by the enemy and fell into close combat. Experienced practitioners of Judo and Kendo died one after the other. Sensei couldn’t help those people, but he was able to survive. He said that it was thanks to Aikido.

(From an interview with the branch head of the Yamaguchi Prefecture Aikikai – Katsuya Nakamura Shihan (中村克也), 8th Dan) 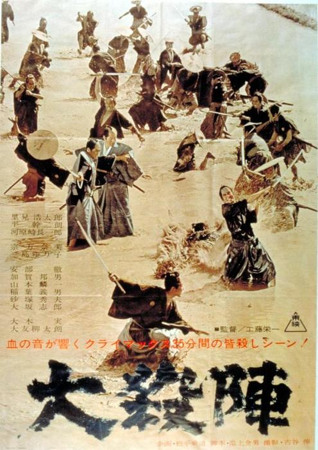 By the way, how many people do you think can be defeated with a single sword?  It seems that one-hundred men can be defeated easily. Do you know the movie “Daisatsujin” (“The Great Killing” / 大殺陣)? It is an old movie. One man cuts down one-hundred men. You might say that would never happen, but it really does. In war, even in recent wars, there have been actual instances.

However, Ueshiba sensei was enraged at the proposal.

“Unthinkable! If that were to be done all Japanese would become devils!” “Originally, cutting a person, killing a person, was a high crime. We started the war ourselves, so we should be sorrowful about it. It’s unthinkable that Aikido would be the best thing for killing people.” “I quit Aikido!” he said, and retired to Iwama. After that, he did not resume his activities until Showa year 24 (1949).

Do you know the article “Tanren ni Kiwami-nashi” (“There is no end to training” / 鍛練に極み無し)? It is an interview with O-Sensei by Shigetoshi Takahashi (高橋しげとし) during the war, in February of Showa year 20 (1945). It appeared in the April issue of “Shin-Budo” (新武道) magazine in Showa year 20 (1945).  In that interview Sensei says “I had no intention of ever teaching Budo again”.

He had come to the idea of giving up the Budo that was practiced up to that time and starting a new Budo from that point. The reason for this is that Aikido had reached the pinnacle of Budo. Once the pinnacle is reached it is no longer used. I suppose that science is the same. Science has not yet reached its pinnacle, so we fight wars and use atomic weapons. When something is made that can destroy the earth, in other words, when science has reached its pinnacle, it will no longer be used.

So then, we must infer the meaning of what “Aikido” is from what was said by O-Sensei. If it is “a method of training that requires the union of God and Man and the presence of Aiki” then it is a way of human beings. In other words, Bujutsu is not technique, it is a method of living. This is also something that O-Sensei said in “Tanren ni Kiwami-nashi”.

How the “life power” (命の力) of human beings can best be increased, and how they can best make use of that power, has been researched for thousands of years. The Bushi, Samurai and Bujutsu-ka have especially researched this deeply because of its close relationship to their techniques and their own survival.