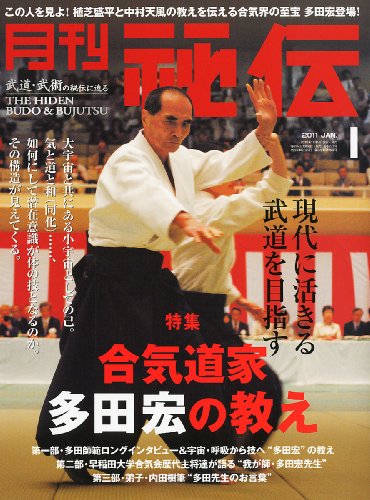 Hiroshi Tada (多田 宏) sensei is one of the major figures in post-war Aikido. He entered Ueshiba Dojo in 1948 and was sent by the Aikikai to establish Aikido in Italy in 1964. Like many of the post-war Aikido students, including Ki Society Founder Koichi Tohei, his practice has been heavily influenced by his studies with Shin-Shin Toitsu founder Tempu Nakamura.

More information about Hiroshi Tada sensei can be found in this eight part interview conducted by Tatsuro Uchida, a well known Japanese author and a long-time student of Hiroshi Tada:

This is the second part of the English translation of a lecture given by Hiroshi Tada sensei at the 15th anniversary of the Yachimata Aikido Association on September 26th 2004. You may wish to read Part 1 before reading this section.

“Shinjin Aiki” (神人合気) and “Bonga Ichinyo” (梵我一如) have the same meaning.  Is is the same meaning as the Sanskrit terms Brahman and Atman in Buddhism, in other words, “Wake-mitama” (“divided spirit” / 分霊).

In sum, from the very beginning it is our Wake-mitama that has driven the construction of this universe. This is the basic premise when considering our mind (“kokoro” / 心).

”All things from one source” (万有一元), “Shin-butsu” (the marriage of Shinto and Buddhism / 神仏), the unity of life and death (生死合体) are all the same concepts, they begin from the one.

The first source of the beginning of all of these is “Ki”. In this case “Ki” means the energy that is the foundation of the universe. The great force that constructs and moves the universe. However, the problem is that our life is different than Ki. Our mind and our body are not Ki. Our life is the basic principle of the universe that has been brought into being by Ki, the Wake-mitama that is the “will of the Great Origin” (“the will of the Oomoto” / 大本の意志) that moves “Ki”. In other words, our life force must be the same as the origin that brings that force into being or nothing can be explained.

This is the first premise of Aikido. In other words, that we are the children of the universe. Stated simply. I’m not saying that aliens (“people of the universe” / 宇宙人) are around somewhere. It is that, at the same time that we are humans on the face of the earth, we are also creatures of the universe. Please examine O-Sensei’s poems and writings with that premise in mind.

Next, there are two ways of thinking when considering the “Way” (道) within this premise. 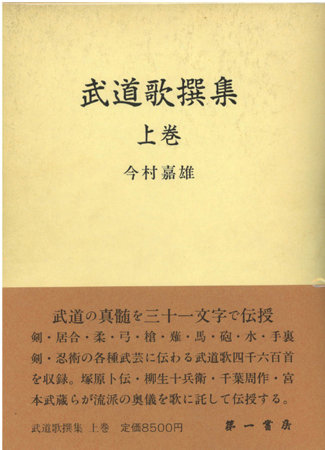 First, “Shingaku no Michi” (心学の道) is the way of ethics. For example, things like behaving seriously in the Dojo that are closely connected to Bushido. This is the way of the ethics of a particular era.

We can immediately understand the meaning of “Shingaku no Michi” when speaking about Bushido. The Bushi arose towards the end of the Heian Period. This was the principle that established feudal society from that time, beginning with the Kamakura Period and lasting until the end of the Edo Period. There were many things required in Bushido, such as loyalty, or the way of sincere character, among those great emphasis was placed on “loyalty” (忠誠).

The purpose of “Shingaku no Michi” is to train in Bujutsu for the purpose of developing warriors of good caliber. This was a way that was required from outside in those times (*Translator’s note: in other words, imposed by society), a way of moral philosophy. This is something that changes with the times. In our time is was “loyalty and patriotism” (忠君愛国). The period from Meiji through Taisho, and into Showa. It crossed a border on August 15th of Showa year 20 (1945 – the surrender of Japan), just at the time when it was strongest, and changed like a hand turning over. Those of us living in that period were immediately struck with the impact. We went through the text books that we had used until that day and inked out the mistakes. Perhaps others do not feel the impact of  it so clearly… 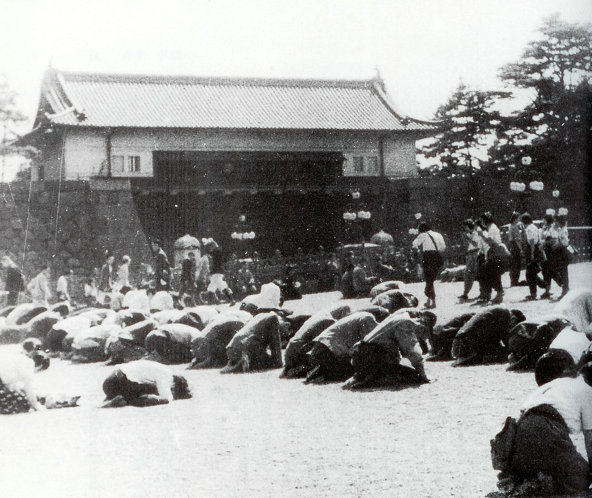 At that time, perhaps 95% of people thought that “Shingaku no Michi” was the Way of Budo. That’s certainly true. However, when you see the word “Shingaku” appear you can understand that this is from Confucian teachings.

From times past Bushido was a thing of pure Shinto. That became mixed together with the teachings of Confucius and Mencius, and with Neo-Confucianism, until it was completely developed towards the end of the Tokugawa Period. Additionally, there had been a long period of peace, so the idea of training in Budo in order to develop people of good character had emerged. Accordingly, there was a powerful influence on Budo itself. That continued through Meiji, Taisho and into Showa.

“Shingaku no Michi”, in other words, was used to explain the heart of Budo in the schools of the clans. The clan schools were very advanced in some areas, and slow in others, but in the so-called public schools of the clans Budo was advocated for the purpose of developing Bushi of good character.

“Shinpou no Michi” (心法の道), on the other hand, can be said to be the exact opposite, advocating something completely different. Its goal is how one’s “life power” (命の力) can best be increased, how one can improve their skills, how one can best live so that they can be truly be satisfied with themselves as a human being. This is really something that is more Shinto or Taoist, with strong influences from the Buddhism that came from India via China.

In this the technical method is especially emphasized. This is true for the techniques of Budo, but also when a swordsmith forges swords or armor, in the work of a craftsman, or when an artist paints a picture. 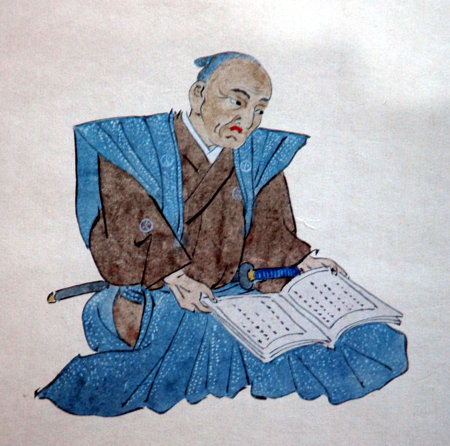 “Shinpou no Michi”, like the Narita-san temple near here, was heavily influenced by the teachings of Kobo Daishi (弘法大師, also called “Kukai” / 空海).  The two teachers Kobo Daishi (Kukai) and Dengyo Daishi (伝教大師, also called “Saicho” / 最澄) were sent as envoys to T’ang China in the year 804. But they were only there for two or three years. They brought back Esoteric Buddhism, which was the cutting edge of Buddhism at the time. The reason why Kobo Daishi was so powerful was that Buddhism had become the national religion, it had been received by the Imperial Court of the time and spread throughout Japan as the national teaching.

What has been called “the science of mental concentration” sank into Japan deeply. The “Way” that is advocated through these teachings is something that is required for becoming skilled at what we will call “techniques”, and is different from “Shingaku no Michi”. “Shingaku no Michi” set up a class system and was an extremely strict path. For example, Bushido created the Warrior-Farmer-Craftsman-Merchant class system.

On the other hand, “Shinpou no Michi” is something that is universal, that can be received by all people. This is the idea that “all people are welcomed by Amida Buddha” (万人来迎). For that reason, Kukai built a school that anybody could attend.

Kūkai (空海), also known posthumously as Kōbō-Daishi (弘法大師 The Grand Master Who Propagated the Buddhist Teaching), 774–835, was a Japanese monk, civil servant, scholar, poet, and artist, founder of the Shingon or “True Word” school of Buddhism. Shingon followers usually refer to him by the honorific titles of O-Daishi-sama (お大師様?) and Henjō-Kongō (遍照金剛).

Saichō (最澄, September 15, 767 – June 26, 822) was a Japanese Buddhist monk credited with founding the Tendai school in Japan, based around the Chinese Tiantai tradition he was exposed to during his trip to China beginning in 804. He founded the temple and headquarters of Tendai at Enryaku-ji on Mt. Hiei near Kyoto. He is also said to have been the first to bring tea to Japan. After his death, he was awarded the posthumous title of Dengyō Daishi (伝教大師). 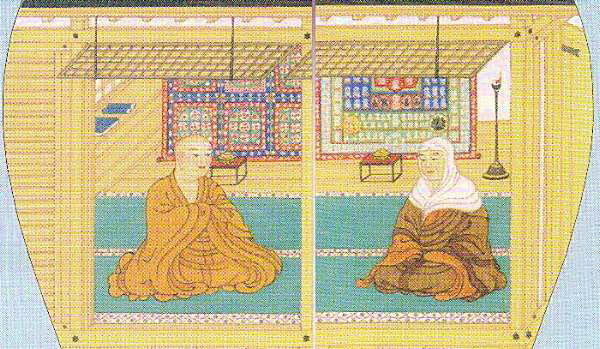 Of course, there is original philosophy in the teachings of Kobo Daishi, but the origin of those teachings is Mandala, that is to say, Yoga.

In other words, the purpose of “Shinpou no Michi” is to determine how mental concentration can best be developed and increased. There are a variety of training methods such as Kokyu-ho and other techniques of mental concentration for that purpose. Even today, they are used by modern people to develop their abilities.

One can read twenty or more traditional Budo scrolls, and they will all explain the truth of Budo through “Shingaku no Michi”. However, in “Shinpou no Michi” the greatest emphasis is placed on the state and use of the mind.

Those skilled in, for example, Tenshin Shoden Katori Shinto-ryu (天真正伝香取神道流) usually finished their lives as Shingon Buddhist priests. Even now there are some left in the temples. Most of the famous masters of the past were practitioners of Buddhism or Shinto.  They placed great emphasis on “Shinpou no Michi” and did much training in the ways of “Misogi” or “Zen”, or other methods of Mandala.

These methods are more universal.

In other words, “Shingaku no Michi” is the rules laid down by human society, “Shinpou no Michi” is a Way that searches for universal principles.

On the license given to Munetoshi Yagyu (柳生宗厳) by Ise-no-kami Kamiizumi (上泉伊勢守, born 1508) the following passage is written in his own hand:

In our country Bujutsu is the life of Izanagi and Izanami, in China it is “Shichiten” (? – the meaning here is unclear), in India it begins with Brahma. In other words, we follow the principles of the universe in the practice of our Budo.