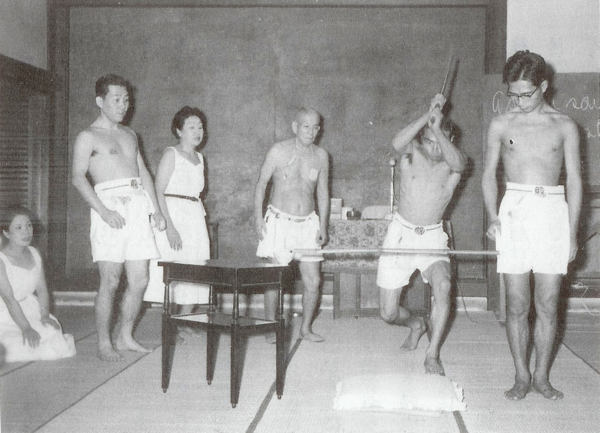 One of Hiroshi Tada’s teachers, Tempu Nakamura, was famous for his bamboo cutting training. The bamboo was suspended from hollows cut into two strips of paper, which in turn hung from two upturned knives held by two assistants. The bamboo would be split without ripping the suspending top and bottom holes in the strips of paper. Koichi Tohei also continued this training method, as explained by his son Shinichi Tohei.

This is part 3 of the English translation of an interview in Japanese with Hiroshi Tada. You may want to read part 1 first to learn about Tada Sensei’s samurai ancestry and his encounters with Shotokan Karate Founder Gichin Funakoshi, and part 2 to learn about how Hiroshi Tada met Shin-Shin Toitsu-Do Founder Tempu Nakamura. 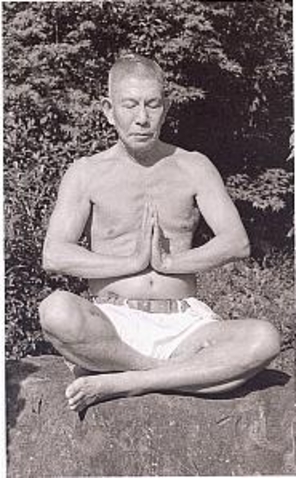 Uchida: There was something about ringing a buzzer…

Tada: Rather than listening, you absorb the sound, and when the sound has disappeared absorb the sound that makes no sound. “Listen carefully and hear the voice of the sky”. This is “Anjo Daza” (安定打座 / “Seated Serenity Meditation”). Of course, acting after the buzzer has sounded is for beginners, but it makes it possible to act after direct experience. If you grasp this well the sound of the buzzer is no longer necessary.

Uchida: Is this method of meditation also yoga?

Tada: Methods of using sound in meditation are quite common in yoga. However, I have been told that this method was begun by Tempu Sensei. Sensei was constantly seeking innovations that would teach his students how to better and more quickly achieve states of the spirit that could not normally be achieved without long periods of training. On one occasion, he was invited to a factory somewhere. The electricity would fail with a certain rhythm, and all sound in the factory would disappear for a moment. At that moment Sensei was absorbed into a state that was the same as that which he had experienced during long periods of zazen in the Himalayas. It was then that he thought “This is it!” and began this method.

Uchida: So – does that mean that rather than a normal sound, a low frequency sound is better?

Uchida: I thought to focus on a sound like a bell whose resonance gradually diminishes. That’s wrong, isn’t it? What else is there? Speaking of telepathy training, I did it once before in Chiba.

Tada: Telepathy training requires that you spend time in serious research. We are doing this in the Aikikai d’Italia. For that reason, every year we have a week long camp in the basic training of Kokyu-ho, Anjo Daza and telepathy. We began this type of training in the Aikikai d’Italia after I had been in Italy for 4 years, in the summer Aikido camp in Venice. That was the first time that we did “not thinking, feeling” training. The difference between thinking and feeling is something that seems to be understood, but actually is not.

We have continued this kind of training in the Aikikai d’Italia dojos since that year. Speaking of telepathy training, it’s not a matter of suddenly understanding what people are thinking. It would be better to say that it is an extension, an amplification, an assimilation of each other’s awareness of the five senses, a special matching of the breath (Kokyu). The impact of this training on Aikido technique is even better than you imagine. All movement becomes fluid and comes into balance. When a job or other task goes especially well the phrase “Kokyu ga au” (呼吸が合う / “matching breath”) is often used, and with this training that feeling becomes so clearly expressed in the body that is can be seen even by disinterested outsiders. The absorption of this training into Aikido technique can be seen even more clearly among the Waseda Aikido members, for whom it is always a part of the training.

There is no such thing as that problem of the Eastern spirit which says “Westerners can’t understand this”. Of course, believing or not is a separate matter. If something is explained in a way that can not be understood intellectually, well – a good sense of it can still be grasped through the use of an objective, practical method of execution.

Even over there, from childhood people pray with their parents and recite prayers and passages from the bible, and within their own history many monks gathered to train in monasteries. It is because of hearing this kind of story that it is not a bit mysterious. The more difficult the explanation is the more it will be analyzed intellectually, and the the less it will be understood.

There is a hypothesis among recent scholarly theories that the philosophy and training methods of Indian Yoga were transmitted to the West, and Christianity.

When we began in 1968, our members were extremely appreciative, and it was a great success. Since then we have always included it in each summer’s training camps. By the way, from around 5:00 in the morning to around 8:00 at night, in addition to six hours of training in Aikido technique there is a great deal of “Ki no Renma” training, so it takes quite a long time. After the first summer training camp in Venice, training camps were held in Rome and Desenzano del Garda in Northern Italy, and after that at the Italian Football Federation’s central training ground in Coverciano on the outskirts of Florence – it has a large gym, a pool, and four football fields. There is a hotel in the area, but the members stay at a camp site. Due to the problems with various curfews, we became less and less able to train in the early mornings, and by necessity divided the technical training and the “Ki no Renma” into separate training camps.

We are practicing the teachings of Ueshiba Morihei Sensei, the practice of Eastern Philosophy and Tempu Philosophy in the framework of Aikido. There are many participants. This is because enthusiasm for research into the relationship between the body and the mind has become popular now in both Europe and America.

Uchida: Is the reason that you don’t do this much in Japan that the response here hasn’t been very good?

Tada: No, that’s not it. It is a problem of space and time. However, large numbers of foreigners come to Japan to train in Budo, and a great many of those who come are interested in the thinking of Eastern Philosophy and in the actual training of the spirit. By the way, among those are some who are disappointed and return home. They express surprise, “The teachers in Japan only know European methods of training, they don’t know anything about Eastern methods of training. I can’t learn anything because the don’t know anything.”.

Uchida: This is a problem of instruction, isn’t it? 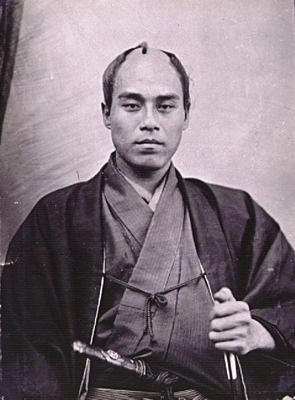 Tada: This is related to the main issue of Japan turning its face towards the West during the Meiji Restoration – “Leave Asia, enter Europe” (Note: 脱亜入欧 – a saying from Fukuzawa Yukichi). At exactly the same time, top class Yoga instructors from India were migrating to Europe and America. It is from then that the people there became very interested in things such as the subconscious mind. It is more than one-hundred years since then. The problems of the body and the spirit, the problems of the deep psyche have been researched seriously. Japanese of the present era must be grateful for the many Eastern meditative training methods that have been changed to the European and American style. Autogenic training, image training, stretching exercises, these were all originally part of Yogic meditative and training methods.

This is the immense influence that the Yogis have had on Western intellectuals. 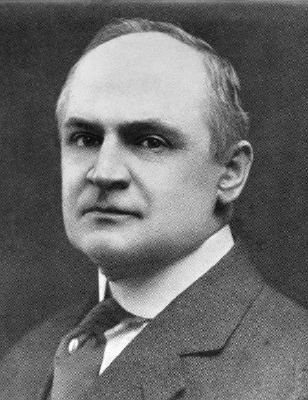 There was a Yogi called Yogi Ramacharaka. When Thomas Edison was experimenting, there was a time when he developed a neurological illness due to electric shock. Because of that his body became quite sickly, and he could not be healed through Western medicine. Some concerned persons heard tales of the Yogi in India, and through the British viceroy at the time invited one of the Yogis to America. That was Ramacharaka. It is said that Edison was healed through the guidance of Ramacharaka. Outside of Kokyu-ho and meditative methods, it is said that Ramacharaka produced what would be called a “Koan” in Japan. Edison calmed his spirit and produced an answer to the Koan. It is said that Ramacharaka later said, “Until this time I have taught many people, but never one as intelligent as Edison”. That is because the true answer to a Koan is insight. In 1905 Ramacharaka published a book called “Science of Breath“, which is still in print. The recorded lectures of Ramacharaka have also been published in more than a dozen publications.

Of course, both before and after Ramacharaka many great Yogis have come from India.

Uchida: I didn’t know that there was such a lengthy tradition. I thought that the great popularity of Eastern thought came from the Hippie movement of the 1960’s in America.

Tada: It was a long time before that. There were many people in Europe who took up the problems of the spirit, but it is likely that they came to know of these things through the published works of the Indians. Even today that transmission continues to form the base. That came to be expressed outwardly after World War II. During the war many terrible mental disorders arose from the battlefields. Research into those matters has progressed. Actually, in Budo you must understand this or you will not be able to understand the true essence of Japanese Budo. Normally, when you think of Japanese Budo things like Judo or Kendo come to mind. However, modern Budo is a modern educational method. After the Meiji Restoration it was changed into gymnastics and imported into education. This is vastly different from the traditional Japanese method of instruction.