Hiroshi Tada (3rd from right) at the 40th Anniversary of Aikikai Switzerland
With the Mayor of Neuchâtel and Ambassador and Mrs. Ichiro Komatsu
From Aikido Shimbun number 585, published October 10th 2009

This is part 4 of the English translation of an interview in Japanese with Hiroshi Tada. You may want to read Part 1 first to learn about Tada Sensei’s samurai ancestry and his encounters with Shotokan Karate Founder Gichin Funakoshi, Part 2 to learn about how Hiroshi Tada met Shin-Shin Toitsu-Do Founder Tempu Nakamura, and Part 3 to learn Tada Sensei’s thoughts on “telepathy” training. 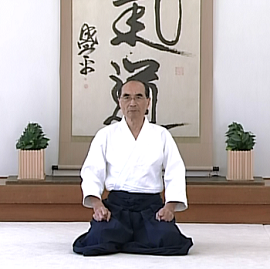 Uchida: You were speaking of the traditional Japanese educational method?

Tada: Lay the problems of the spirit as the number one foundation, and build up a body that is appropriate for the spirit. Always treat the body and mind as one, this is the method of practicing Eastern Philosophy.

One could bring up “the culture of Kata (form)” as one of the characteristics of Japanese culture.

When discussing Kata, there are many different types of Kata. If there is a Kata that is simply of form, then some people think of this as a matter of a sequence of steps.

“Kata gives birth to art, inculcates the principles of mind and body, and represents the most efficient method of practice in order to utilize those principles.”

Therefore, in Kata the fundamental mind and body and are created and refined, and limitless applications, free variations and transcendent forms are contained.

True Budo, the method of training the art, is a continuous flow like the river’s water flowing from the mountains to the sea. For example, there is a training method called “Randori”, this is also essentially one type of Kata. Separating that from Kata is a very great mistake. Moreover, Randori is a method by which those who have trained and become proficient may test themselves. As to what you are testing, it is not a matter of testing whether or not your technique is effective. It is a test as to whether or not your mind will become captured or not. With regards to being captured, in Budo we say “Stop, stay, reside, arrive, become Aiki” (止まる、留る、住する、著する、合気となる).

By the way, training methods like this are something that must be thoroughly studied over a lifetime, they are not something to be mastered easily, and full knowledge and experience must be passed on by the instructor. However, normally those with enthusiasm for this kind of thing are few, and the majority of people seem to want something that can be done more easily, with results that can be clearly seen.

This is not limited to current times, in the past it was the same, and there are many written works from the Tokugawa era with the same type of warnings.

Also, it is common when Kata are transmitted that many of the true intentions are only understood by the person who created them. Over the generations of transmission much of the meaning becomes misunderstood, and there are cases in which the both the Kata and the meaning have changed over time.

At heart, Bujutsu is used as the border between life and death, and is an extremely pragmatic thing. One characteristic of the traditional training methods of Japanese Budo is to abandon all thoughts of contests, of the strong and the weak, and to instill the principles of the mind and body that can bring forth technique. If you don’t look at this clearly I think that one might say, “This can’t be used because it’s Kata. We have to be able to try and strive freely against each other” and fail to either understand the deeper points or even try to see them. The effect of the mind’s condition on the body is larger than you imagine. For example, even if your mind and body have both been white up until now, if your mind becomes red your body will also become red in an instant.

Normally, even if you watch then you won’t really understand, but Aikido training can be understood right away. Judo, Kendo, Karate may be more difficult to understand. In Karate the opponent is at a disctance, in Judo they are already being grasped, in Kendo you wear armor and there are techniques for using a bamboo sword. In Aikido both partners are empty handed, and there is a moment when you make contact with the opponent’s body. When your mental state changes you can understand that as there is an immediate change in the movement. Even if you don’t notice when your mind is captured by the tactics of your opponent, the atmosphere of conflict comes forth clearly. Above all, there is a change in the rhythm.

However, you must learn to listen to your feelings, it is something that cannot be understood through intellectual effort. When reading Tempu Sensei’s books, I feel that there is a difference between when I or other direct students read them and when other people read them. Even now, when I read works authored by Sensei it feels as if I am sitting directly in front of him. It feels as if I am absorbing it all like water poured onto the desert. I do not read it critically. “I understand this. This is interesting” – I don’t read it like that. Students often say things like “Is this real? What do you think of this?”. They are reading it comparatively. When they read it they increase their knowledge. However, sometimes I think that it is difficult to have a direct effect on the spirit.

Uchida: So you must make the decision to place complete trust in the instructor?

Tada: When you do that it will be as Morihei Ueshiba Sensei said, “Aikido is not a religion – however, it is a religion just the same”. Believing is not something that can be understood through words, it is something that cannot be explained. It was also the same with Tempu Sensei.

Uchida: I can understand that well. Many great things have been written. It’s just like that, that feeling. It’s like the feeling “the scales falling from your eyes”. When you hear it as the real voice of your actual teacher it’s completely different, isn’t it? 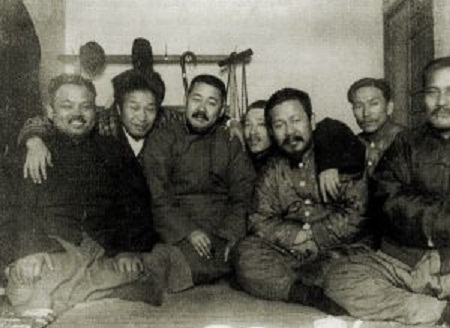 Pilgrimage to Mongolia in 1924
Onisaburo Deguchi, second from left, with Morihei (Moritaka at the time) Ueshiba on the far right

Tada: Well, I suppose that depends upon the person. Ueshiba Sensei believed in Omoto-kyo, but it might be even better to say that he took absolute refuge in the spiritual teacher (Seishi / 聖師) Onisaburo Deguchi (出口王仁三郎聖師).

Uchida: Previously, you mentioned a bit about an anecdote concerning Tempu Nakamura Sensei, something about a sword cutting a cheek…

Tada: The person who did that wasn’t Sensei, it was someone else, I think. Turning the blade of a sword upwards and standing on it, or lying down on a bed of needles, or something like that. Depending upon the thing it’s not something that anyone can do, however.

Tada: Sensei had a great deal of that kind of power. What is now called the “telepathy knockout”, and other things…

Uchida: What about the Ki symposium? 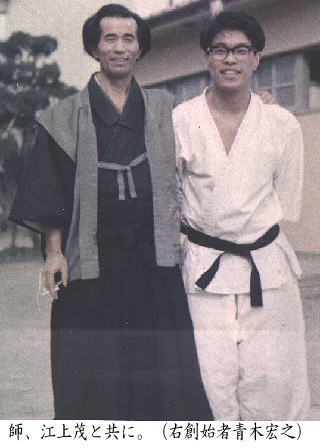 Tada: Ahh, it took place at Tsukuba University. At that time it was organized by Mr. Hiroyuki Aoki, so it became quite a hot topic. Tempu Sensei also went to see a few times.

Uchida: Did you ever have these things applied to you?

Uchida: What did it feel like? Did your abdomen become warm?

Tada: Yes, it did. It is difficult to explain. For the rest, I decided to take Ukemi for the things that were done to me by Tempu Sensei.

Uchida: Ukemi? Were physical techniques being applied to you?

Tada: No, rather than physical techniques, it was various experimentations with the use of the power of the mind. Tempu Sensei’s teachings were extremely refined.

Uchida: Was he also a charming person as an individual?

Tada: Some people were frightened of him.

Uchida: How many members were there when you began? Were there several hundred? 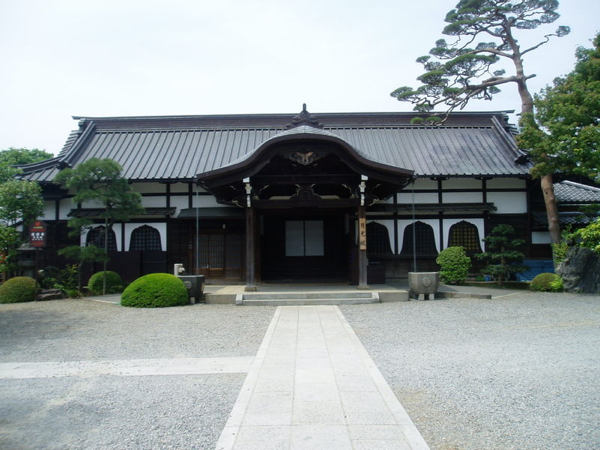 The Gekkoden at Gokokuji in Ikebukuro, Tokyo
built in 1681 by the 5th Shogun Tsunayoshi Tokugawa

Tada: If you include all those who became members since the founding then that may be so. Around that time the seminars that were held every month at the Gekkoden Hall at Gokokuji would attract 4-50 people, but the special seminars in the summer would attract as many as 400 participants from around the country.

Uchida: You were also leading a parallel life with your Aikido training. How did you handle the two mind and body operating methods?

Tada: I came to understand Aikido through Tempu Sensei’s lectures and training. That is because, at the heart of it, Ueshiba Sensei’s talks were all about the gods.

Uchida: Yes, I see. When I watch the videos I can’t understand anything that he’s saying.

Tada: That’s not it, there are also things that are very easy to understand. Those things have not been recorded. After training we would massage Sensei’s shoulders, and back, and listen to him speak about many things. This was very simple and easy to understand. When we were doing extra training after the regular practice time Sensei would come out and teach us things “This goes like this”. That was really wonderful.

Uchida: But I still cannot understand the lectures that have been preserved…

Tada: Some of the lectures were difficult to understand, but it was a unique atmosphere – understand, don’t understand, anyway – it was wonderful.

Uchida: Didn’t you become confused as a Shugyo-sha (修行者) when caught between these two masters who had such overwhelming personalities?

Tada: I really didn’t think about it very much. I thought about what was good, and what was difficult, I didn’t think of them as being completely different things. I thought, “The method of explanation is different, but I’m probably being told the same thing”. I came to understand later that this was correct.

Morihei Ueshiba Sensei and Tempu Nakamura Sensei both explained the same things – Kokyu-ho, meditation and the knowledge of everyday life. Just their words were different. That is because it was Shinto Misogi and Indian Yoga. As I said before, it was after I joined Tempu Sensei’s group that I began to really understand Aikido. First of all, if you think about the reasons behind the development of Japanese Budo I think you will understand well. What person had the greatest effect on Japanese culture?