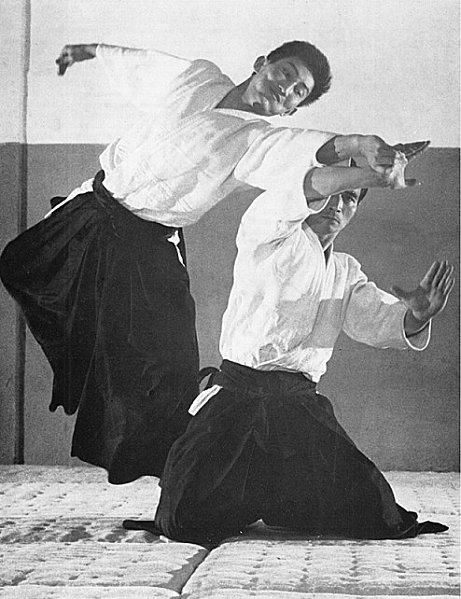 This is part 7 of the English translation of an interview in Japanese with Hiroshi Tada. You may want to read the previous sections first:

Part 5: learn about the most influential person in the history of Japan, and their relationship to Japanese Budo.

Part 6: find out why Hiroshi Tada’s father was told never to read books on archery. 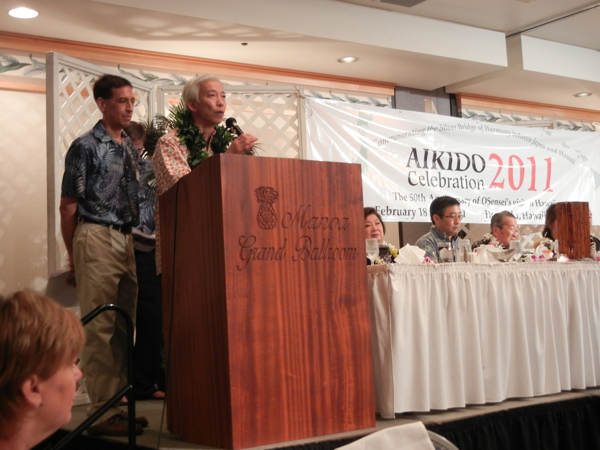 Tada: Aikido will be centered around the Aikikai Foundation’s Moriteru Ueshiba Hombu Dojo-cho and protected by the young Shihan. However, those young Shihan must exhaustively pursue and train in the research of the spirit, especially the relationship between methods of mental concentration and physical technique.

Uchida: Would you say that excellent Budoka cannot be produced under the current status quo?

Tada: No, I’m not quite saying that. However, I think that a particular atmosphere will disappear. Mainly, you have to think about what has been transmitted. Simply speaking, it’s a matter of entering a trance. You must be serious about putting your heart into the technique and entering into a trance. In order to do that you must be highly skilled and have unshakeable conviction.

Uchida: This is very interesting. Is it easier for those with conviction to enter a trance?

Tada: When I speak of conviction it’s not something that I’m thinking of with my head. You must have the feeling of fusing Aikido with your way of living…it must appear to those watching from outside almost as if you are possessed by a demon.

Uchida: On a separate topic, although you often speak of publishing a book it never seems to come out (laughing) – what’s happening with that?

Tada: This year is the 30th anniversary of Aikikai d’Italia, after that…

Uchida: Will it be written in Japanese?

Uchida: When the Japanese is completed we would be grateful if the students of Tada Juku could be allowed to read it. 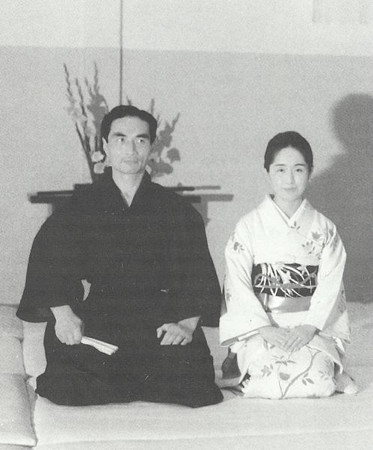 Hiroshi and Kumi Tada, at their wedding ceremony in 1970

Tada: Shall we sum up here? (laughing)

In any case, my main subjects are conversations with my father from my childhood, Ueshiba Sensei and Aikido training, the teachings of Tempu Nakamura Sensei, the Ichikukai Dojo, fasting, my experiences in Italy, then my marriage to Kumi (a violinist from Tokyo Fine Arts University) and the problems of life as an artist with the demands of their longheld beliefs, the birth of my child Takemaru and the frequent trips the three of us took to Europe…that’s already enough for six or seven books.

Tada: There are many things that I would never have been able to experience without fasting.

Uchida: What kind of experiences?

Tada: Earlier I think that I said that the spirit has a direct influence on the body. When you have been fasting for more than two weeks the digestive system shuts down. Then you come to understand that when you happen to think about food your digestive system immediately springs back to life. One might think that this is because saliva enters your system. That’s not it. You come to understand that it is because the sensitivity of your nervous system is such that the state of your mind is immediately reflected in your body.

Uchida: Why did you begin fasting in the first place?

Tada: It was around the time that I was a Sho-dan, I became a Sho-dan in July of the year that I began.

Uchida: You started in March and became a Sho-dan in July? That’s really fast! (laughing) 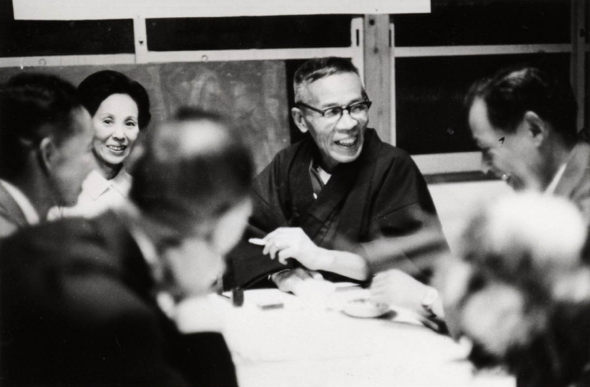 Tada: That’s because we practiced from morning till night. At that time in Ueshiba Dojo there was a round-table discussion of the first Sunday of every month.

There were many people who were famous in society among the Dojo sempai, but other important people would also come to share their experiences, there were demonstrations, and exhibitions of swords worthy of being National Treasures. Yukikazu Sakurazawa (桜沢如一) came to one of these monthly meetings – do you know who that is?

Uchida: Yes I do.

Tada: He came, and spoke about “Muso Genri” (Note: 無双原理 / the principle of balance of In and Yo in the diet). Later, there was a discussion of Aikido training at one of Sakurazawa Sensei’s meetings, and since the venue for Sensei’s seminar was in Hiyoshi on the Toyoko line near my house in Jiyugaoka, I was told to go attend training, which I did many times. At that time there was someone there named Ava Nakamura, for some reason everybody was using European names.

Uchida: Yes, George Ohsawa was the same, wasn’t he?

Tada: Nakamura-san fasted for 30 days at Tateyama. At Tateyama there were people like hermits that they fasted with. When you have fasted for more than 20 days, it was said that in the morning you could already understand what was going to happen that day. It was said that you could even understand everything that someone was thinking.

That was when I first developed an interest in fasting. I was still a student at that time, so I went to the Ueno National Library and borrowed all of their books on fasting to look into it. There were some interesting books. Kaoru Umeda’s “Reconstruction of Mind and Body” (心身改造), and in a book called “Spiritual Fasting and Healing” (霊的断食療法) there was an account of a woman from the end of the Meiji Period who fasted for 110 days.

Uchida: And she didn’t die? I wonder if she practiced so severely that she died (Note: 即身仏 / ascetic training to the point of death and mummification)?

Tada: She was a school teacher named Suzue Yamane (山根寿々恵) who graduated from Tokyo Joushi Koushi (東京女高師), which is now Ochanimizu University (お茶の水女子大). She had some kind of suffering and entered the fasting hall at Narita-san, practiced Gyousui (Note: 水行 / in other words, Misogi) every day, and was said to have done Ohyakudo-mawari (Note: お百度回り / “One-hundred times around”). By “Ohyakudo” I mean running around the main hall. It is supposed to be about 10 kilometers. At times she is said to have done Ohyakudo 5 times, for a total of 500 times around. That’s 50 kilometers. While fasting. When one is fasting for such long periods there may be times when a little food is taken, but even so it is said that she did not look as if she had fasted for 110 days.

Uchida: What happened to her person after that? Did she attain liberation?

Tada: She took inspiration from that ascetic training and became famous as a sage (Note: literally “immortal person”, 仙人), there were many reports in newspapers of the time.

Uchida: How long did you fast?

Tada: At first I fasted for a week in the guest house, one month after that I fasted for three weekes at the Rinzai Zen Houshuuji Temple in Kobotoketouge (小仏峠). I fasted two more times after that at home.

Uchida: During those times did you just live normally?

Uchida: What was it like during the one-week fasts? 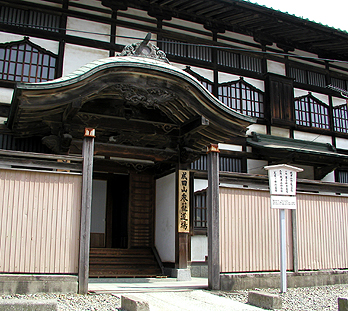 Tada: The first time was mostly a failure. My father would say “I heard you’re fasting, that’s pretty difficult. Take a break.”, so I spent half the time sleeping. When you’re sleeping you stop moving around. When people go on hunger strikes they must spend half their time sleeping. When you do that you stop moving around. No, no, when you do that it’s really dangerous. No, no, you mustn’t do that. You should enjoy it. When my father was in middle school he thought that he wanted to become a natural historian, and was a person who knew all kinds of things, but he just didn’t know anything about fasting.

When I first thought about fasting, I thought about doing it at Shinshouji (新勝寺) in Narita. The fasting hall at Narita Fudou (Note: 成田不動 / a popular name for Shinshouji) has been well known since ancient times, many famous people such as Sadanobu Matsudaira (松平定信) and Hakuseki Arai (新井白石) have gone there. However, although I took the Keisei Line to Narita I didn’t know where anything was. All I could see was sweet bean jelly shops. (laughing) I didn’t know where the hall or anything was, so I just ended up going home. So then I fasted for a week in the guest house during spring break. However, I didn’t feel very good so I tried to do it over again.

I don’t remember how I learned about Kobotoketouge, but I must have read about it in a book. There was an elderly priest there. Every morning I would follow the priest and recite the writings of Hakuin Zenji on Zazen. After that I was free, so I read read books by Tempu Sensei…Tempu Sensei published “Shin Jinsei no Tankyu” (真人生の探求) and “Kenshinshou” (研心抄) in Showa year 25 (1950), just the time that I started. He hadn’t published a book since the Taisho Era, it was said that the teaching had to be a direct transmission from heart to heart, that it was difficult to learn anything from a book. Later my daily routine would be to practice Kokyu-ho under a waterfall, and take walks through the forest. After three or four days the feeling of wanting to eat something would begin to disappear. Because I had made the decision not to eat anything. Basically, it is different from wanting to eat but being unable to. For the three week period that I had decided upon I did not feel any hunger. On my tenth day of fasting I climbed to the top of Kobotoketouge. The mountains and the boats floating in Lake Sagami were beautiful. I ran down the mountain. My heart felt like it was going to burst.

After my three week fast was over, I rested for three days and gradually ate a little rice gruel, and then returned home. At that time there was no bus from Kobotoketouge to Asagawa Station (now Takao / 高尾), so I put on my back-pack and ran back.

After the fast has finished is an important time. After the fast has finished the stomach is shrunken and there is not much of an appetite. However, after five or six days the appetite roars back to life, and I was warned by the priest that if you eat too much at that time it can become life-threatening. About four or five days after I returned home a really incredible appetite returned. I was so hungry that there was nothing that I could do about it. Because your body is undergoing a re-birth. There are many people who overeat and hurt themselves at this point. Some people would eat an entire watermelon and then die.

Uchida: You can die from eating watermelon?

Tada: The bodies cells want the strength to regenerate, but the digestive system is not fully functioning. When you put a large amount of something into it…For that reason it is also dangerous for refugees to suddenly eat large amounts.

Uchida: So there are no feelings of starvation when the digestive system has shut down?

Tada: Up to about three weeks there are none. When you fast for extremely long times and come close to death it is said that there are some danger signals…However, one of my motivations for fasting was to be calm in the midst of times such as those in wartime, or when there is no food, so as to prepare myself against surprise. (laughing)

Uchida: What happens then? How do your physical sensations change?