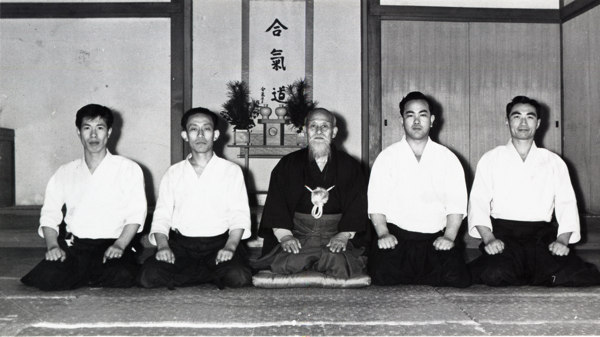 Hiroshi Tada (多田 宏) sensei is one of the major figures of post-war Aikido, and is currently the only living Aikikai 9th Dan. He became a student at Ueshiba Dojo in 1948.

Here is are some of  Yasuo Kobayashi sensei’s recollections of Tada sensei (from “Aikido My Way“):

Hiroshi Tada Sensei was the sensei who was teaching the first time I went to observe a practice at Hombu Dojo. He was a somber ball of lightning who was twisting arms and smashing people down. When I was leaving, he just said “If you’re interested, come to practice.” There had been no explanation of the techniques. After I had begun to practice, I realized that Sensei had no half measures in his tempering style. With the bokuto, if we resorted to strength, it was as if we had had a thousand cuts to the abdomen. After regular practice, we uchideshi would have to do 1000 suwariwaza ikkyos. In the dojo he would pick up and hold in one hand an enormous tempering stick and brandish it, stopping just where he wanted to.

A really long time ago, when I was walking on a narrow street near the Arch de Triomphe in Paris I heard someone calling “Kobayashi. Kobayashi.” When I turned my head I saw Tada Sensei waving his hand. It was a good accidental meeting.

Later, when Tada Sensei returned to Japan from Italy, he took it easy at his dojo Gessuji in Kichijoji. My dojo isn’t far from Kichijoji. Suddenly there was a phone call from Sensei. “Kobayashi, I’m going to Italy the day after tomorrow. Send some teachers here.” He only said what he needed and that was all. He didn’t ask my opinion. With great excitement teachers were sent one after another. Kazuo Igarashi Sensei went there a great deal. He had been my assistant having trained up in my dojo and I lost him during this time. Tada Sensei even today is still energetically teaching.

You may also be interested in this eight part interview with Tada sensei conducted by Tatsuro Uchida, who is a well known Japanese author and a long-time student of Hiroshi Tada:

This is the third part of the English translation of a lecture given by Hiroshi Tada sensei at the 15th anniversary of the Yachimata Aikido Association on September 26th 2004. You may wish to read Part 1 and Part 2 before reading this section. 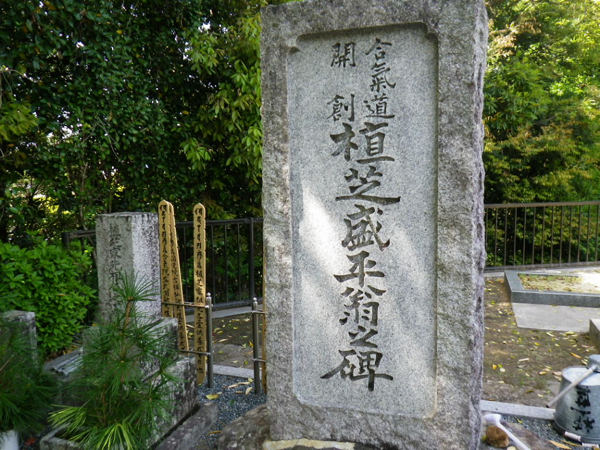 What O-Sensei believed in was Shingon Mikkyo (esoteric Buddhism). O-Sensei’s grave and a monument to him is in Kozan-ji (高山寺 / Kozan Temple).

O-Sensei met Sokaku Takeda of Daito-ryu at the age of 32. When he was 35 he returned home because his father was gravely ill, and at that time he met Onisaburo Deguchi. Met him and adored him. Why did O-Sensei, who was a practitioner of Shingon Mikkyo, fall for Onisaburo Deguchi? Onisaburo Deguchi preached the common origin of all religions (万教同根). That is, all teachings arise from the same source. So, he wouldn’t say that because I believe one way your way is no good. He approved of everything. O-Sensei really fell for that aspect of him.

When one looks at O-Sensei’s Doka and other writings they might think that they are related to Shinto, but they actually contain the teachings of Shingon esoteric Buddhism. The average person probably doesn’t understand that. I specialized in practicing Aikido, and listening to his lectures, so I understand. The symbolic cuts, the nine symbolic cuts (“Kuji-kiri” / 九字切り), what I taught everybody today about the creation of a “place”, this is the idea of making a Dojo just for yourself within this huge Dojo. In the past this was called a “border” (結界). It is upon this foundation that one builds their Shugyo. 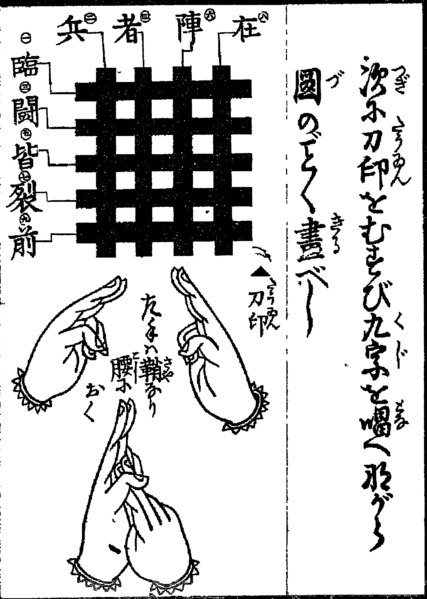 Kuji-kiri
“The Kuji Method of Self Defense” (九字護身法), 1881
Hand gestures are used to empower specific concepts
This is found today in Shugendo, Shingon Mikkyo
and some martial arts lineages.

In modern terms, you yourself preside over that place. Whoever comes. Whatever happens – how many times have I repeated this?

Shingon Buddhism (真言宗 Shingon-shū) is one of the mainstream major schools of Japanese Buddhism and one of the few surviving Esoteric Buddhist lineages that started in the 3rd to 4th century AD that originally spread from India to China through traveling monks such as Vajrabodhi and Amoghavajra. The esoteric teachings would later flourish in Japan under the auspices of a Buddhist monk named Kūkai (空海), who traveled to Tang Dynasty China to acquire and request transmission of the esoteric teachings.

Mikkyō (密教, lit. “secret teachings”, “esoteric, Tantric Buddhism”) is a Japanese term that refers to the esoteric Vajrayāna practices of the Shingon Buddhist school and the related practices that make up part of the Tendai and Kegon schools. There are also Shingon- and Tendai-influenced practices of Shugendō.

Just exactly what is “mental concentration”? This is one of the things that is the most misunderstood. This year we took a survey among the young people in Italy, but even though they nod and say “yes, yes” when one is speaking, when questioned afterwards it seems that they don’t really understand. As I suspected, it seems that nobody understands “Shinpou no Michi”. Even though I’ve been doing this for more than thirty years… 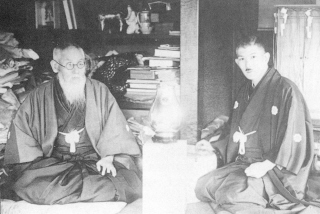 Here are the most important points of “Shinpou no Michi”:

Anybody can understand that you must concentrate with all of your effort. However, there are two different aspects to “all of your effort”.  It could be said that there is one case that backfires and one that doesn’t. Defining things as clearly as the “Keichu” and “Shuchu” chart above is a difficult thing. As with a single piece of paper, the two sides can flip over and change in an instant. Just when you think you are doing well things flip over and change. 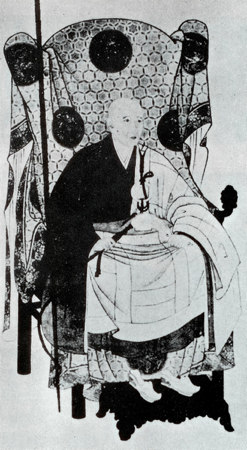 In Takuan Zenji’s “The Mysterious Record of Immovable Wisdom” (不動智心妙録) it is expressed as “The stopping of the mind is the moving mind, the mind that moves and changes freely is the immovable mind” (心のとどまることが動く心であり、ころころと自在に動くのが動かざる心である。).

When “Keichu” occurs it becomes fixation. What is the state of fixation? The stopping of the mind means that the mind moves with the object of  its fixation. In other words, it as if a separate mind has been created within you. For example, when one must avoid the attack of the opponent, or when one hates someone, a desire rises within their mind and their mind becomes fixed at that point.

Then, what is the state of “Shuchu”? It is to make your mind like a mirror. In ancient times there was a saying “The enlightened being’s use of their mind is the same as a mirror” (至人の心を遣うこと鏡の如し). “Keichu” is a method of immersion in the relative mind. The mind stops there and the fixated mind is born. On the other hand, “Shuchu” is to use the mind like a mirror. Just as the image in a mirror changes when the mirror is moved, the self is in a state of absolute freedom.

In order to reach this state, it is important to meditate with Kokyu-ho. The deep states of that meditation can be expressed as “concentration” (集中）, “unification” （統一） and “Sanmai” (三味) – in the original language these are “Dharana”, “Dhyana” and “Samadhi”.

Samadhi, as pointed out above, is the eighth arm of Patanjali’s Ashtanga (eight limbed) yoga. The last three of the eight limbs are called Antaranga, or Internal yoga, meaning they occur solely in the mind of the yogin. The three limbs are: dharana, dhyana and samadhi. Together, the three are collectively called samyama. Dharana, dhyana and samadhi are sometimes translated as concentration, contemplation, and meditation, respectively.

It is important make your mind transparent to whatever comes, to undertake this with all of your effort, but it is quite difficult to actually become aware of the “Keichu” state towards the object, because the object becomes the master while you end up chasing after it. On the other hand, in the “Shuchu” state you are always the “master”, and the object is always “chasing” you, so one becomes able to feel as if they are reflecting the opponent’s (object’s) state in a mirror.

In other words, in the “Shuchu” state, the state of your mind becomes absolutely free, an absolute state in which the object does not move you to the left or the right. In the “Keichu” state the object takes you to the left and the right, in a relative state where there is no freedom.

So if you have 2 or 3 opponents when in the “Keichu” state, there will be 2 or 3 objects, you will not be able to establish control, and it will become a real disaster.

Ancient scrolls of Budo explain this with tedious repetition. You must absolutely never enter a state of “Keichu” or use a method of training that allows you to be taken into such a state. This is written in every one of the ancient scrolls.

This is not true only for Budo, it is exactly the same in one’s everyday life. Hating or fearing people, mourning or being envious, these all make the mind fixate on the object.

Fight delusions like the state of “Keichu”, clear them away. By deepening your state of “Shuchu” one is able to realize the universe within their own mind, and realize that one’s self is something that has been given as a Wake-mitama (分霊) from the universe itself.

O-Sensei taught “To become enlightened to the spirit of the Universe is Aikido” (大宇宙の精神を悟得するのが合気道である。) – when watching O-Sensei one could really sense the feeling of what he was saying.

It is easy to think about the state of “Shuchu”, but just thinking about it won’t get you anywhere. First, you must forge your Ki well through Kokyu-ho and accumulate an abundance of energy. If you don’t have that abundance of energy, then no matter how much effort you expend you will not be able to achieve control. This is because when the object that you face is large you will be pulled towards them. “Keichu” is written with the character “傾く” (“incline towards”), so you should understand this immediately.

I would like you to be careful here, because the dictionary definitions of “Keichu” and “Shuchu” are the same. Try looking it up in the Kojien (*Translator’s note: a standard Japanese dictionary / 広辞苑)! I am using it here as a pre-defined convention. This is a convention used in the Tempukai when doing research into such matters.

As to how this connects to Budo technique – building an abundance of energy through Kokyu-ho is important for training in how to control your own sensations. 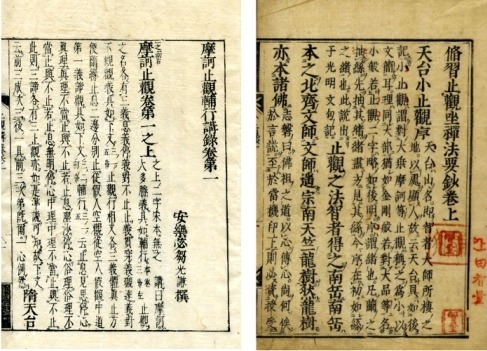 Pages from the Makashikan (left) and the Tendai Shoshikan (right)

In terms of Indian style training this is Pranayama (Translator’s note: extension of the pran, or breath” or, “extension of the life force”). By the way, when speaking of training methods we’re talking about India or China. Japan is a Shinto nation, and since one faces the Gods directly there is not much talk of difficult training methods. If we’re speaking about training methods then we’re generally talking about famous works such as the  “Yoga Sutras of Patanjali” (ヨーガスートラ), or the Chinese “Makashikan” (摩訶止観 / “The Mahayana Practice of Cessation and Contemplation”) and “Tendai Shoshikan” (天台小止観 / “Samatha – Vipassana”).

When examining these types of works we can see that the ways in which human beings train were developed some thousands of years ago. They practiced Kokyu-ho, purification of the senses through dietary control, methods for increasing life force, how to eliminate distractions and obstructive thoughts, and methods for controlling one’s five senses.

O-Sensei’s ability to use these things during technique in Aikido training was truly astounding.