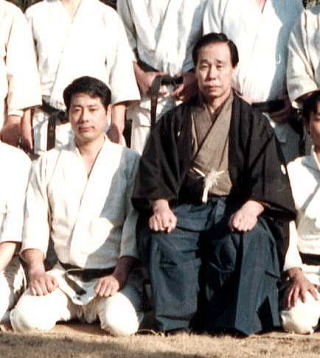 Keisetsu Yoshimaru trained in Daito-ryu under Yukiyoshi Sagawa from 1961 until 1976, after which time he separated from Sagawa Dojo. He continued to train in Chinese Bujutsu and other arts, such as a separate line of Daito-ryu descended from Kakuyoshi Yamamoto, who was, perhaps, the last student of Sokaku Takeda. He later established his own organization, the Aiki Rentaikai (合気練体会).

He published a number of interesting books in Japan, and remains a somewhat controversial figure in Daito-ryu. Some of the most interesting information in his books is his collection of quotes from Yukiyoshi Sagawa, many of which have never been translated into English before.

Yukiyoshi Sagawa started training with Sokaku Takeda around 1914, about a year before Morihei Ueshiba met Takeda at the Hisada Inn in Hokkaido. He was once considered to be the successor to Takeda Sokaku.

The quotes presented here are from the summary section of “Aikido no Ogi” (合氣道の奥義 / “The Secrets of Aikido”) – “Aiki no Rentai” (合気之錬体 / “The Conditioned Body of Aiki”). This section contains a summary of the quotes from Yukiyoshi Sagawa relevant to the conditioning of the body necessary for Aiki.

To set the stage before that, here are some short and casual comments on Aiki and Aiki-age (ie, “Kokyu Tanden-ho” in conventional Aikido) from another former student of Yukiyoshi Sagawa – it’s a little over ten years old, but still relevant, I think:

In the Dojo there are people with many different ways of raising their hands. You could even say that each person is unique to themselves.

As for different ways of grabbing and so forth, that’s really not very relevant, because it’s really a matter of a problem with the person who is raising their hands.

I think that people are often told to relax their shoulders. This is an extremely important thing. As to how you actually relax your shoulders? That’s not taught even at Sagawa Dojo. Everybody must research that on their own. However, it may be one of the strengths of Sagawa Dojo that you learn to judge what is mistaken through your own research. Of course, you can’t get to that judgement right away.

The Aiki-age of Sagawa Dojo is like this. Absolutely no bending the wrists, close your armpits, focus your power on the point at which you are grabbed (Aiki is an internal sense, so this is difficult), relax your shoulders and raise your hands up without changing. That’s all.

Lastly, concerning Aiki. First of all, in Sagawa Dojo, “power” (力 / “chikara”, also meaning “strength”) and Aiki are completely seperated. And when speaking about “power”, it’s different from the kind of power that we normally use. “Martial” power (武術的な力 / “bujutsu-teki na chikara”)? Some people call it that, and some people call it the power of the extensor muscles. “T” shihan views the “extensor muscles” explanation negatively. I think that most of the students in the Dojo see it that way as well.

The first thing that new students learn is Martial power. They learn the effecient use of power in order to lay the groundwork for Aiki.

If you are intuitive then you may be able to grasp Aiki, although some people misunderstand, but if you don’t lay the groundwork well then intuition won’t help you at all.

One way to misunderstand Aiki is to mistake the power that your body gains through this groundwork for Aiki. The reason for this is that this power appears similar to Aiki when seen from the outside. Most of the black belts in the Dojo have this problem.

But the Aiki that is spoken of in Sagawa Dojo is a completely different thing. Sensei often said that if you don’t change your way of thinking you will not be able to glimpse Aiki. However, that Aiki is in fact an extension of this groundwork is not mistaken.

I guess that the only way to understand this is by going through the conditioning and changing your way of thinking. 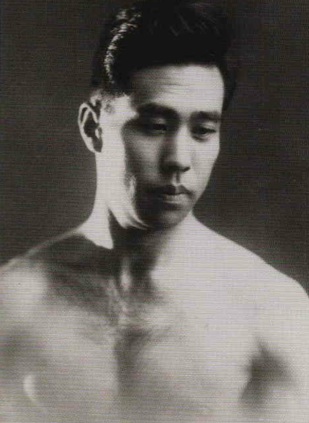 Yukiyoshi Sagawa in his thirties

If you train in reversals against Ikkajo, Nikajo and Sankajo then it is normal that they cease to become effective. You can extend that to training with Yonkajo and Gokajo, but as Yukiyoshi Sagawa sensei said, in the end the goal is the creation of the conditioned Aiki body (Aiki no Rentai). One may say that our goal it to be able to express Aiki, but even more than that we should aim at the higher level of cultivating the Aiki body. There are some repetitions here from Section 2, but I would like to summarize the “Aiki no Rentai” here.

August 23rd, 1965
Make a point of strengthening the joints – ankles, knees, the hip joints connecting the upper and lower bodies, and you must also strengthen things like the wrists.

August 25th, 1965
In the end, if your body is not conditioned then even if you are taught you won’t be able to do anything. It’s a problem of building the body.

January 19th, 1966
Building the legs and hips is the way to progress. The is a conclusion that I have reached through long years of experience.

January 8th, 1967
Also, when using the sword the strength of the wrists (snap) and the reversal of the wrists is extremely important.

Henko in Sagawa Dojo – the caption reads:
“Also called ‘Tai no Henko’ – training in changing
the direction of the body around the axis of both feet.
Here we introduce the method of raising both hands
up at an angle to the front from the point of Aiki-age.”
from Hiden Budo & Bujutsu Magazine – Masaru Takahashi, June 2008

March 14th, 1966
You cannot do technique if your body is not developed. Lately I have been taking it a little easier, but I still continue training Henko Ashi (変更足) three thousand times a day. I also try to do all of the sword, staff, spear and striking as usual. If you don’t continue to do this every day you cannot call yourself a Bujutsu-ka. Because of that, I am confident that I can respond to a challenge at any time. Of course, it’s not something that you can use instantly if you haven’t used it for a long time.

August 22nd, 1968
“Suburi”
First, building the body. Cut to the left and right, alternate your feet on the left and right stepping forward slightly and cut. (1) Shomen (2) Yokomen to the right and left. At first relax and stretch out your arms as you strike. Next, study the concentration of power in the tip of the sword. Swing so that it feels as if the blade is striking two or three inches below the tip of the sword. Only after you have swung some ten thousands or hundred thousands of times will you first begin to reach the limits of your body.

September 19th, 1974
If you use a sword then Suburi is your base. Stretch out and make a large cut straight downwards without any tension. At least three hundred times a day – if you don’t do it for three years then it won’t stick with you. 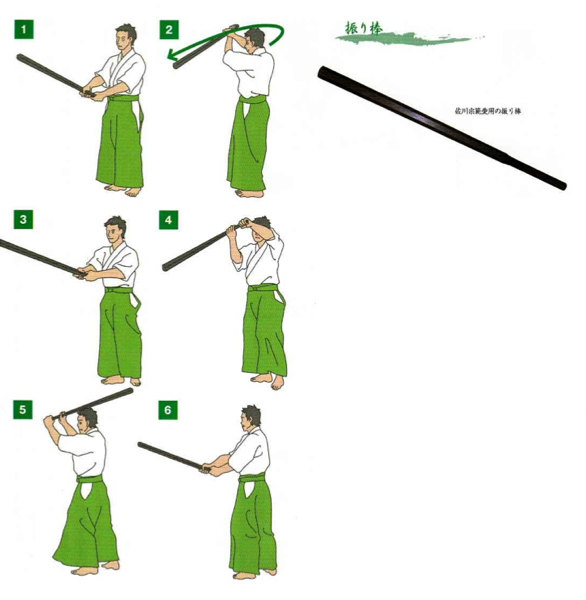 Furibo in Sagawa Dojo:
the furibo on the right was one of Yukiyoshi Sagawa’s favorites
from Hiden Budo & Bujutsu Magazine – Masaru Takahashi, June 2008

August 6th, 1971
If you swing the Furibo (*a heavy club swung for conditioning and strength training) you will become able to swing it endlessly. I once swung one seven hundred times.

October 21st, 1968
It’s necessary to concentrate power in the forearms. Exercises like swinging the Furibo are effective, but there aren’t any results for six months to a year.

May 24th, 1964
In order to become strong it is necessary to strengthen the grip of your left hand.

October 24th, 1969
In the end, cultivating the body is the most important thing. Training in Henko Ashi (変更足) is important. Also, it is extremely important to turn on the tips of your toes.

4 thoughts on “Aiki no Rentai: The Conditioned Body of Yukiyoshi Sagawa, Part 1”