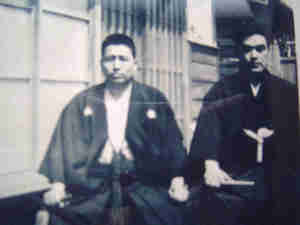 Keisetsu Yoshimaru (吉丸慶雪) trained under Yukiyoshi Sagawa from 1961 to 1976. After leaving Sagawa Dojo he also trained under Kinbei Sato (佐藤金兵衛), who had trained in Daito-ryu under Kakuyoshi Yamamoto (山本角義), another direct student of Sokaku Takeda.

Kakuyoshi Yamamoto was born on March 3rd, on the 3rd year of the Taisho era (1914). Sokaku Takeda would come into the restaurant where Yamamoto was a cook, and despite an initial impression of Takeda as an evil old man, after several visits they began a conversation. “I’m a Bujutsu-ka” said Takeda, and after talking for a while he said “Come and try!”, so Yamamoto started training under Sokaku Takeda in Showa year 12 (1937).

In Showa year 16 (1941) Yamamoto became an uchi-deshi, and took over much of the care and feeding of Takeda, who was no longer physically able to care for himself. Takeda would apologize “Yamamoto, I’m sorry, I’m sorry”, as he was carried on Yamamoto’s back.

Yamamoto noticed that Takeda sensei’s abdomen was covered with small cuts. This was from a knife that he would carry in his kimono wrapped in a towel. The knife would often slip out of the towel while he was instructing, causing the small cuts – something that most students would never see. Takeda, a veteran of many violent incidents in his youth, was always armed, and would carry this knife with him at all times until his death.

Yamamoto attended Takeda as he passed away on April 25, Showa year 18 (1943), in a ryokan in Aomori. After Takeda’s death Yamamoto took two Kanji from Takeda’s formal name and changed his first name, Tomekichi, to Kakuyoshi, in order to honor his teacher Takeda Sokaku Minamoto no Masayoshi (武田惣角源正義).

Kinbei Sato was born in Taisho year 14 (1925) in Fukushima. Sato studied a large number of arts under a variety of instructors, including the noted Chinese martial artist Wang Shu-jin, and Daito-ryu Aiki-jujutsu with Kakuyoshi Yamamoto.

This is the second part of a two part translation of the summary section of “Aikido no Ogi” (合氣道の奥義 / “The Secrets of Aikido”) – “Aiki no Rentai” (合気之錬体 / “The Conditioned Body of Aiki”), by Keisetsu Yoshimaru . This section contains a summary of the quotes from Yukiyoshi Sagawa relevant to the conditioning of the body necessary for Aiki.

You may want to go back and read part 1 before you continue any further. 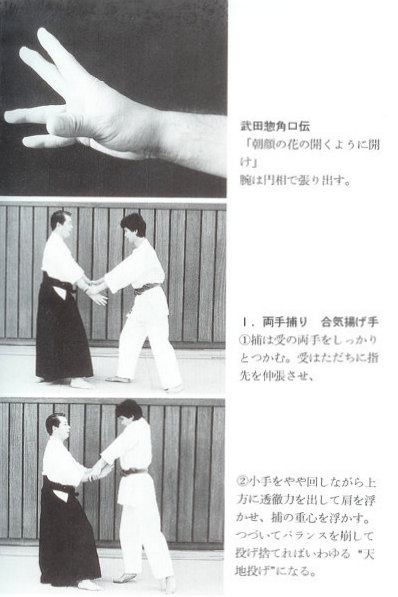 January 9th, 1970
The most important thing in Aiki is the legs. You must build muscle in the necessary areas of the hips and legs through training the legs in “Henko”.

December 28th, 1970
When conditioning, if you do not think of what your goals are, what you are going to move and why, and the reasons for doing it, there will be little result.

July 23rd, 1971
The way that I built my body was through push-ups. From the time that I was a teenager I would train 1,500 times a day. Through that it became possible for my body to become a single unit. This is not limited to push-ups, but it is important to continue each physical training method for at least three years. Suburi, for example.

April 5th, 1971
It’s no good if you don’t have thick thighs. Conditioning yourself and becoming strong means that you’re building muscle.

July (no date) 1970
The muscle on your hips and abdomen must be thick and you must begin to move from there. Technique done with slim hips will not be effective. However, thickness from fat is no good.

July 26th 1971
If you only train with pulling then the power of your projection will become weak. The muscles that pull and the muscles that project power are different, and if you just move with one of them then the other becomes weak. When body building (*Translator’s note: western body building/weight lifting) your power of projection becomes weak.


January 10th, 1971
When speaking of conditioning, you must train to build a body that is suitable for Aiki. You must become an independent fortification.

*Note: In addition, Shiko (四股) is extremely important. I was told by Sensei that he had once stomped as many as 1,500 times, but he felt that he could still go on indefinitely.

April 20th, 1964
It moves as a single unit. The arms are full and the shoulders are relaxed.

April 25th, 1964
Even after you have applied a technique the legs must be full.

September 3rd, 1968
The Aiki body. Unity of the forearms, body and legs.

September 21st, 1973
The body that uses Aiki is used as if there is a string pulled taught. Whatever you do, you continue to move as if the string is stretched tight. You use this while showing yourself as if this were not the case.

*Note: what is being stated here is the control of the extensor muscles. 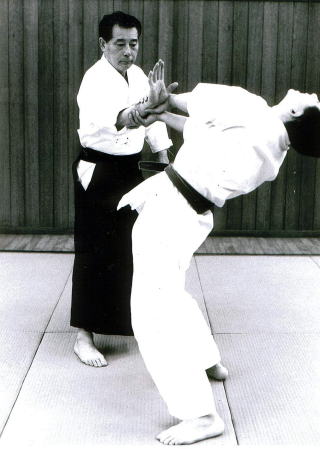 January 12th, 1975
When I move it becomes Aiki. The goal (of our techniques) is the creation of the Aiki Body. It’s not individual techniques. The body itself becomes Aiki.

February 8th, 1971
Research is important. It’s not a matter of just saying that something is correct. Even now I continue my research. If you are always researching than you will gradually come to understand.

January 9th, 1970
My former teacher told me “One more (turn)”. You give something twisted in the opposite direction one more turn. When yakuza or con artists came he wouldn’t say not to teach them, he’d get a good hold on them and then make it hurt. A con artist with scars on his face came to Kokubunji, but he quit in two days. Takeda sensei taught “One more, one more”.

January 5th, 1971
When resistance occurs, make a sudden change at the blocked point.

August 25th, 1967
My former teacher was not at all concerned with how much power was put into the form. Especially, perhaps because his body was so small, he was skilled at instilling fear from the beginning. 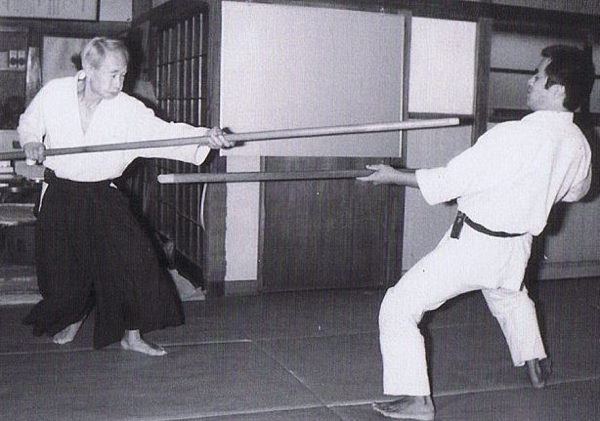 Yukiyoshi Sagawa practices with the spear

May 12th, 1971
What ever kind of person he was partnered with, Sokaku Takeda sensei would always use all of his power in the technique. That’s also the way that I learned. It’s impossible to apply technique if you’re thinking about letting your partner go. It’s necessary to follow through with the spirit of holding them down to the very end.

August 6th, 1971
My former teacher was an extremely thorough individual. When he was living in my house he worked all night on the tools to make caramel, only stopping when they were completely finished the next morning. That was one story from my father. Once, when I went to visit Sensei, he was watching the training while polishing an unfinished mulberry tray – he stayed like that for three days and two nights, only stopping when it glowed with light, and then he never picked it up again. This type of thoroughness is important.

June 28th, 1965
I became able to do techniques like this in my forties, when I think about it now I was using strength in my thirties. It was the same at first in Daito-ryu, I was just twisting my arms, there wasn’t any throwing with winding in the form.

January 8th, 1967
Warriors of the past would hold their umbrellas in their left hands, the would also carry their Keiko-gi in their left hands. Since that was in order to control the right hand (the dominant hand) of the enemy it was necessary to strengthen the left hand. For that reason, on a sword rack you must place the hilt on the right.

11 thoughts on “Aiki no Rentai: The Conditioned Body of Yukiyoshi Sagawa, Part 2”