Yukiyoshi Sagawa started training with Sokaku Takeda around 1914, about a year before Morihei Ueshiba met Takeda at the Hisada Inn in Hokkaido. He was once considered to be the successor to Takeda Sokaku.

After Yoshimaru left Sagawa Dojo he also trained under Kinbei Sato (佐藤金兵衛), who had trained in Daito-ryu under Kakuyoshi Yamamoto (山本角義), another direct student of Sokaku Takeda.

Although Keisetsu Yoshimaru remains a somewhat controversial figure in Daito-ryu, he has published a number of interesting books with quotes from Yukiyoshi Sagawa, most of which have never been translated into English before.

This is the first part of a two part translation of the “Bujutsu and Ki-Ryoku” chapter of “Aikido no Ogi” (合氣道の奥義 / “The Secrets of Aikido”), which consists mainly of quotes from Yukiyoshi Sagawa, many of which recount Sagawa’s memories of Sokaku Takeda.

You may also wish to read another two part translation from “Aikido no Ogi” which contains quotes from Yukiyoshi Sagawa relevant to building the “Aiki no Rentai” (合気之錬体 / “The Conditioned Body of Aiki”): Part1 | Part 2) 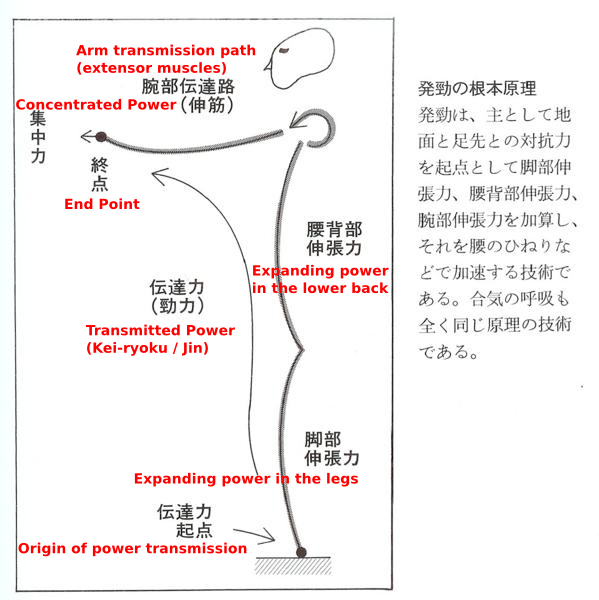 “The Basic Principle of Explosive Power: Explosive power is primarily a method which uses the opposing forces generated between the bottom of the feet and the ground surface added to the force from the expansion of the legs, the lower back and the arms, and accelerated by turning the waist. The Kokyu of Aiki also uses exactly the same method.”

呼吸力を出すためには足の親指を地面に食い込ませるように立たなくてはならない
In order to generate Kokyu you must stand as if you are making your big toe sink into the surface of the ground. -Gozo Shioda

Translator’s Note: “Ki-Ryoku” (気力) is “Ki Power”, and in most of the cases here Sagawa is using it in the sense of “force of will”. He also makes use of the phrase “Ki wo noseru” (気を乗せる), for which I have substituted “project Ki”, but is most often used here in the sense of “projecting will” – or perhaps more accurately “projecting intent”.

You will not be able to fight if you calm yourself through Zen. Zen is unnecessary for Bujutsu. It is said that the Yagyu learned Zen in ancient times, but I think that shows a flaw in their Kenjutsu. Bujutsu is achieved through doing Bujutsu. Nothing else is needed.

August 15th, 1964
The importance of Ki-Ryoku and projecting Ki.

No one is a master capable of handling an attack from any direction and skilled at all techniques from the beginning. That kind of training is no good. You must be able to wait until they come and then deal with it immediately. For that reason, projecting your Ki is important.

Bujutsu cannot be peaceful. When I was young my students would say that it was frightening just to stand in front of me. In mixed martial arts contests we would apply techniques with intent to break arms. If you held back you would be the one it was done to. In mixed Ju-jutsu contests they would come to take my wrist, but couldn’t apply any of their locks, it wasn’t even really a contest. If they came with Judo I would finish them in an instant.

In sports, if your technique is good then that is enough, but since Bujutsu is a thing that must be applied (to the opponent), if you wonder about whether or not something can be applied then there is no way that you will be able to apply the technique. You must be absolutely certain that it will work when you are applying it.

Project Ki and apply the technique all the way to the end. All of my training is done this way. If you stop part way through it will be useless when it comes to a real fight. You must watch and understand that.

Also, when a technique doesn’t work you must immediately transform to another technique to finish.

This is called Ki-Ryoku. The writings in the books of Bujutsu are all about this point. 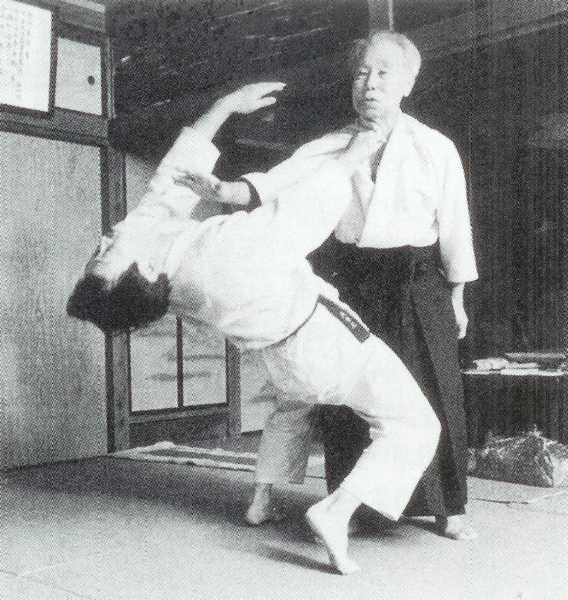 Even if you’re pretending to have courage, just develop your Ki-Ryoku. A craftsman can comfortably work on a tall rooftop, while we would be afraid. However, even if I am cut with a Japanese sword I am not afraid. I am accustomed to it. If you think that it’s frightening from the beginning than you will always be frightened, but if you just pretend to have courage and continue to tell yourself that you are not afraid there will come a time when you are no longer frightened.

I learned this kind of thing by watching Takeda sensei, it’s not something that I was taught.

This is a story of the Aizu Domain. There was once a cowardly samurai. One night he met a person on the road who attempted to surprise the samurai, raising his sword high above his head. At first the samurai was frightened and fell to the ground, but then he cut upwards with his entire being and his sword cut into the person’s side, killing them. This story teaches the value of acting with your entire being, and that “unpreparedness is the greatest enemy” (油断大敵 / “Yudan Taiteki”). 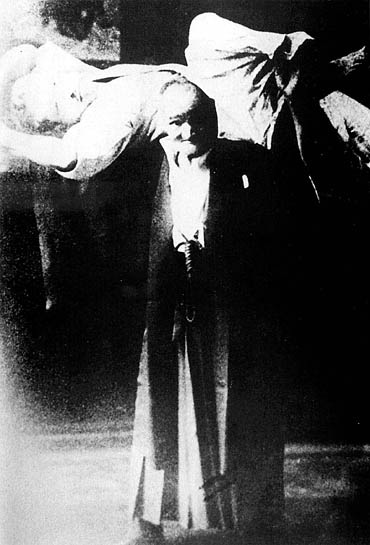 February 17th, 1965
(upon discovering a picture of Takeda senshi holding an opponent up on his back)

In person his eyes weren’t this calm. When someone came into the room he would stare at them and look them over with a scowl from head to toe, and everyone would feel uncomfortable. It was so extreme that in Showa year 11 (1936), when he went to teach a seminar at the Tokyo Daily Newspaper office in Osaka, the owner of the newspaper company called me aside and asked me if Takeda sensei had some kind of mental problems. When a conversation began he would only speak about himself, not allowing the other person to talk at all. Even when he became of advanced age he would always get into fights. Once he was teaching in Osaka when he was around 70 years old – it was going on for a number of days, so I returned to Tokyo. After I left he got in a fight with a young person over water splashing, and he ended up stuffing five or six people into the the bath at the sento.

He was 83 years old when he passed away. He was famous even in Engaru (遠軽) – when Takeda sensei went to the baths everybody else would get out. He would splash water over his head in the bath, and glare at anybody who laughed at him.

If your technique is held in contempt then it cannot be applied. It is important to intimidate them from the very beginning. Even though Takeda sensei would say “Put some strength into it and come get me!”, everybody was so afraid that there was no one who could actually apply their strength. Sometimes there would be someone who didn’t know better who applied strength and tried to struggle, but it ended very badly. In those days you would move from hand to hand and always take things to completion – there was no throwing them away. In Sapporo, the head of the fisherman’s union, Jingorou Hamano (浜野甚五郎), grabbed Sensei in a choke from behind and was thrown to the front. He struck his hip and was unable to stand until he healed some six months later, but such things were considered normal at that time.

If a person has no tenacity they will not progress. That is the difference between things like dancing and Bujutsu. Even I, some people thought that I was a madman in the old days, but it was because I had that much tenacity that I became a little bit skilled. Nobody ever came to challenge Takeda sensei to a contest, in the past there weren’t so many cases of matches between the various schools. You didn’t know the other person’s real skills, so you didn’t actually know who to challenge. Even in Dojo-busting (道場破り / “Dojo Yaburi”), at first you would just ask them to teach you one thing and then start struggling with them in the middle. You can’t be unprepared for that. When you are instructing it is important to pay attention to intimidating your opponent from the beginning. 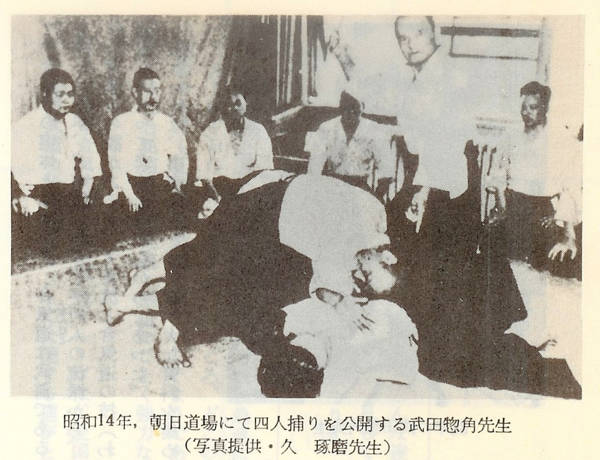 You won’t become skillful just by practicing, you have to project Ki. Be thorough.

It always felt as if there was a blood thirst swirling in the air around Takeda sensei. He always held a posture that was completely free from openings, he would never splay his legs out. In other houses he would always look to the left and right at a door before passing through. When he stayed at an inn he would always prepare a rope to secure the doorways.

Takeda sensei was teaching at the Urawa Police Station when he was 80 years old. He put a large 6 shaku 1 sun (184cm / 六尺一寸) man into a Sankajo with one hand and, saying “Walk!”, took him once around the room and then threw him in the middle of the Dojo. At that time, Sensei, who wasn’t even 5 shaku (151cm), appeared really huge. Takeda sensei had killed people, and carried such an unusual atmosphere with him that normal people couldn’t even look him in the face. I’ve never met another Bujutsu-ka like that. Sensei would never speak while he was teaching, at that time I felt that he was attempting to teach this “Ki-Ryoku”.

Using things like Zen or meditation to increase your mental strength is an attempt to become strong through dependence upon another power, and I think that it is not very effective. The most important thing is to maintain with absolute certainty and tenacity that you will never lose to another person. Even if it’s a bluff, if you continue to do it for a lifetime it will become the truth.

You can strengthen your mental powers even in the Dojo. This is saying “Come on!” time after time and concentrating your mind to the very end. My training in the past was this way, without saying a word of explanation or direction. I think that this is how Takeda sensei was able to increase his mental strength.

2 thoughts on “Yukiyoshi Sagawa on Bujutsu and Ki-Ryoku, Part 1”