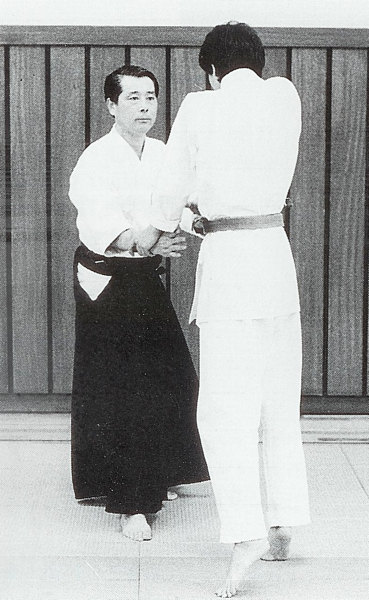 Yukiyoshi Sagawa began training in Daito-ryu with his father, a student and Kyoju Dairi (licenced “Assistant Instructor” – the same license that Aikido Founder Morihei Ueshiba received) of Sokaku Takeda. Sokaku Takeda actually lived with the Sagawa family for some time, and Sagawa started training with him around 1914, about a year before Morihei Ueshiba met Takeda at the Hisada Inn in Hokkaido and became his student. He was once considered to be the successor to Sokaku Takeda.

Interestingly, there was once an agreement for Sagawa to become an instructor at the Aikikai Hombu Dojo around 1956, but he took exception to some remarks about Sokaku Takeda made by Morihei Ueshiba in an interview with the Yomiuri Shimbun around that time and changed his mind.

After Yoshimaru left Sagawa Dojo he also trained under Kinbei Sato (佐藤金兵衛), who had trained in Daito-ryu under Kakuyoshi Yamamoto (山本角義), another direct student of Sokaku Takeda.

Although Keisetsu Yoshimaru remains a somewhat controversial figure in Daito-ryu, he has published a number of interesting books with quotes from Yukiyoshi Sagawa, most of which have never been translated into English before.

This is the second part of a two part translation of the “Bujutsu and Ki-Ryoku” chapter of “Aikido no Ogi” (合氣道の奥義 / “The Secrets of Aikido”), which consists mainly of quotes from Yukiyoshi Sagawa, many of which recount Sagawa’s memories of Sokaku Takeda. You may wish to start with part 1 before you read this section.

You may also wish to read another two part translation from “Aikido no Ogi” which contains quotes from Yukiyoshi Sagawa relevant to building the “Aiki no Rentai” (合気之錬体 / “The Conditioned Body of Aiki”): Part 1 | Part 2 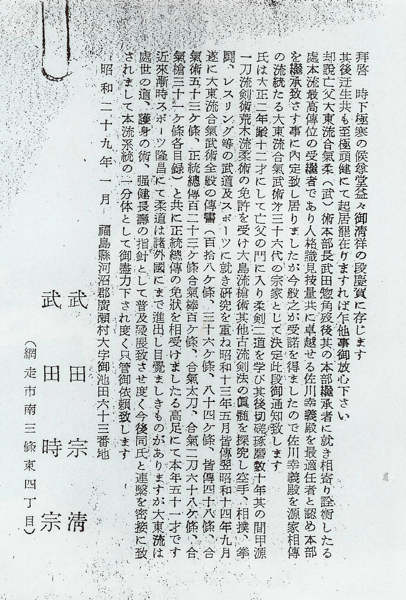 Translator’s Note: “Ki-Ryoku” (気力) is “Ki Power”, and in most of the cases here Sagawa is using it in the sense of “force of will”. He also makes use of the phrase “Ki wo noseru” (気を乗せる), for which I have substituted “project Ki”, but is most often used here in the sense of “projecting will” – or perhaps more accurately “projecting intent”.

Once when we were staying in Kounosu there was a political ruffian on the Yamanote Line who was teasing a woman, so when he passed in front of me I stomped on his instep, knocked him down and called him rude – there was nothing that he could say. It’s important first to dominate them with your Ki.

Even at a funeral Sensei could never be content unless he was seated above the priest.

Sokaku Takeda sensei’s method of teaching was to show around 15 techniques per day, he’d have you come strike and then do it this way from this attack or that way from that attack, just applying the techniques twice each with never any explanation. The technical principles that I am teaching now are things that I have conceived of based on my observations.

It’s okay for a human being to be meek, but in terms of Bujutsu it’s no good. Even if your technique is excellent, in the end, when it comes to a fight something won’t be quite right. If you’re not prepared to steal your instructor’s techniques then there’s no way that you will be able to learn them. You’ll never succeed by just waiting to be taught. 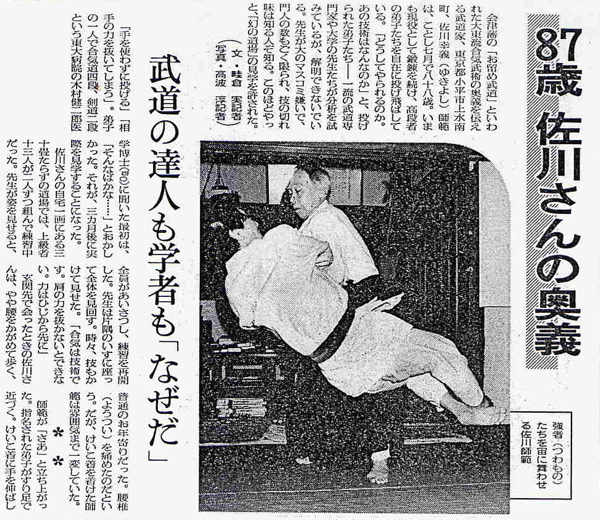 Article about Yukiyoshi Sagawa in the Asahi Shimbun, January 8th 1990

You can’t think of your opponent other than in terms of applying technique. If their bones break or whatever it’s okay. If you don’t do that then you will be the one that it is done to. If you can’t do that than it’s better to give up Bujutsu.

If you stand up then you must not shrink away. It’s normal for any human being to stand up when faced with a real fight. However, if resign yourself completely to face whatever may happen then you will be able to move quickly.

Even when Takeda sensei turned eighty he never lost to younger opponents. Even in the bath, if he thought that somebody splashed him he’d immediately start to fight. When I was with him I would always stay close and keep an eye on him, but when he went alone to the public bath (“sentou” / 銭湯) in Osaka there was a time that he flipped eight young people on their backs and stuffed them in the bathtub. 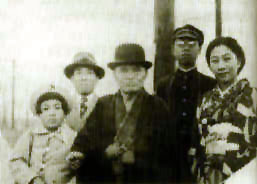 As I remember Takeda sensei, he would always wear a derby, and he’d wear the diamond shaped Takeda mon every day. The cord on his haori was thick and purple and his magnolia wood geta had white leather straps. He always wore socks.

When he met someone for the first time he’d glare at them and look them over with a scowl from bottom to top, so everybody would be frightened. If he wasn’t allowed to sit above the priest at memorial services he would start saying nasty things like “Those priests smell like fish…” (Translator’s note: meaning the priests were corrupt) and in the end Sensei would end up sitting by himself in the high seat (he really made some very clever and cutting remarks). However, when I saw someone who was a student of a Naval Admiral sitting in hanmi in the lower seat I thought that Takeda really was a person able to wield tremendous authority.

His forearms and hands were extremely large, his forearms were about as large as mine are now (27.8 cm around the wrist), and his little finger was about the same size as my index finger.

In Bujutsu it is necessary to intimidate your opponent. Both in training and in everyday life Takeda sensei would always glower at the other person, and it felt as if something with a blood thirst was prowling in the area. I guess that a person who can create an atmosphere like that is a real master. His students were so intimidated that none of them even thought about resisting. I also never accommodated myself to another person’s practice. Everyone trained just trained for their own progression.

Mental strength is extremely important. Since you don’t know the real abilities of someone that you’re facing for the first time, no matter how weak they look you must treat them seriously. In my case, no matter what kind of a person I am facing I always apply the technique seriously.

No matter what kind of a person he was facing, Sokaku Takeda sensei would always use all of his strength, and that’s the way that I learned. You cannot apply a technique if you think of getting into an exchange with an opponent, it’s necessary to be resolved to press them down to the very end.

If you don’t confront them seriously you will not be able to adapt to the attack of the enemy in an instant. You are not applying the technique with enough intent to break the arm, so if they struggle it will not be effective. 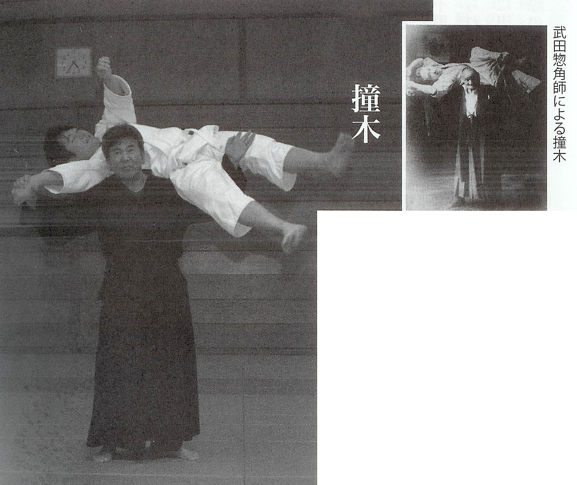 Anyway, Takeda sensei would sit and glare at the person across from him, so faint-hearted people would be too afraid even to speak. I knew him from when I was a child, so I thought that was normal and didn’t think anything of it. There was a blood thirst pervading the air around Takeda sensei.

Bujutsu is not like something you just shape out of clay, the “Rising” (“Ageru” / 上げる) Ki-Ryoku must be present. However, if we’re getting to technique then it’s a different matter.

In your first real fight you tend to stand up too high, so it’s better if you keep your body low when you use your strength.

It’s necessary to be fast, but if you become stiff then your effective power drops down to about a third. In a real fight, especially if you are holding a sword, step forward using the techniques that you have learned up until now with just the intention of practicing how to step forward and cut. It’s necessary to step forward with Mushin (無心). If you think that you have to win, somehow when you think about winning you become stiff and it leads to defeat. 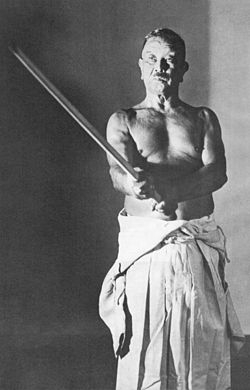 Tokimune Takeda sensei came to visit with his student, Mr. Katsuyuki Kondo. Yoshimaru was present, and created this account.

[Object of the Visit]

Kendo gathered the essence from the various Koryu, and there was a serious question as to whether the truly best things would be hidden, but when the forms were decided each teacher hid a knife in their clothing and attended the conference. My personal opinion is that perhaps Daito-ryu could also be best transmitted correctly to future generations in this manner. I also think that it is desirable for the individual instructors to be allowed to continue their independent research.

The Urawa Police was in Sasaburo Takano’s (高野佐三郎) territory, and everybody was very confident. When we went to teach there I was told “You go first!”, so I went first by myself. That was when I was around twenty years old. I put on a stand up collar because my face was childish, I didn’t look more than sixteen. They told me that I was an idiot, useless, and they bragged about their martial prowess. After that I applied a Yonkajo and when I raised it up they were so shocked that they fell flat to the ground and apologized. The next day Sasaburo sensei came and instructed.

At that time Sokaku sensei took a large man who was a sixth dan in Judo, grabbed him in a Sankajo, and said “Okay, move!” as he walked him around the Dojo. Sensei, who was so tiny, really looked huge at that time. Sagawa sensei and I both said that it was really mysterious.

After that Sagawa sensei also reminisced about how Sensei had appeared so large at the time.

First, apply Aiki. If you take a stance like “Come and get me!”, then however they come you will be able to apply Aiki immediately.

4 thoughts on “Yukiyoshi Sagawa on Bujutsu and Ki-Ryoku, Part 2”