The 1933 training manual “Budo Renshu”  (published in English under the name “Budo Training in Aikido“) was initially given to the students of Aikido Founder Morihei Ueshiba as a kind of a teaching license. It was hand illustrated by Takako Kunigoshi, a student at Morihei Ueshiba’s Kobukan Dojo who began training shortly before her graduation from Japan Women’s Fine Arts University. This was also discussed in the article “Three Doka and the Aiki O-Kami“. 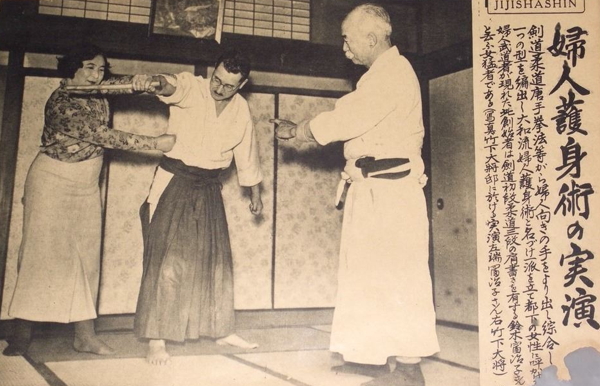 In 1938 Morihei Ueshiba privately published another book, a technical manual called “Budo”, for Prince Tsunenori Kaya, who was one of his students at the time. This manual was (re) discovered entirely by chance by Aikido Journal editor Stanley Pranin during an interview with Zenzaburo Akazawa.

I’ve discussed parts of this book before, in articles such as “Morihei Ueshiba, Budo and Kamae” and the following parts two and three.

In 1954 a book called “Aikido Maki-no-Ichi” was privately published by the Aikikai Foundation – this book was mentioned by Aikido 10th Dan Michio Hikitsuchi during the course of this interview:

Is our current style of practice different from that when you started?

Yes, the waza were done differently. You know, the other day I pulled out a book, Maki-no-Uchi. That was O-Sensei’s first book. We practised along the lines described in Maki-no-Uchi. ‘

Did O-Sensei distribute that book?

No. To have it, you had to have O-Sensei’s permission. For me, that was when I reached what would now be called shodan.

Was it a secret book, something that was never shown around?

Well, I don’t know whether I would call it “secret”. It was, after aIl, a book, and there probably are people who can learn just by reading. But it would have been very hard for someone to read the book end understand what it was about unless that person were practising Aikido. Unless you were shodan or higher, you wouldn’t know what to make of it. I think that is still true today. It’s not as if you can tell someone, “Here, do it as the book shows.” Aikido is something that becomes a part of you – something that comes through the spiritual training [shugyo] of physical practice [keiko].

Now, you don’t have to be too sharp to note that Aikido Maki-no-Ichi was not Morihei Ueshiba’s first book, since it was preceded by (at least) both “Budo Renshu” and “Budo”, but it is the first book by the Founder that contains “Aikido” in the title and was published after World War II and the formal adoption of the name “Aikido” for Morihei Ueshiba’s art.

So what is it? This book was privately published and distributed in 1954 by the Aikikai Foundation in mimeographed bound format, and was edited by Koetsu Ueshiba (Ni-Dai Doshu Kisshomaru Ueshiba’s birth name). 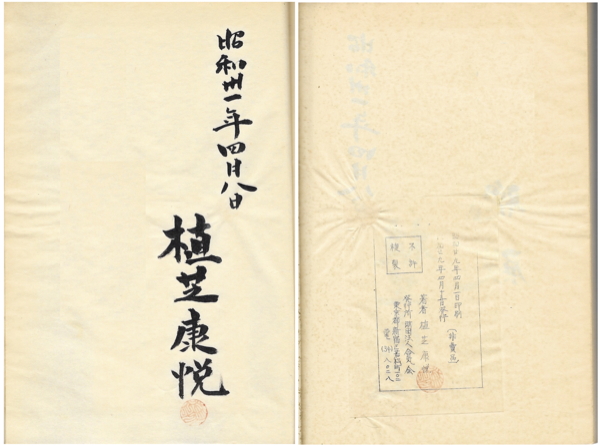 The back pages of Aikido Maki-no-Ichi
On the left – the signature of Koetsu Ueshiba, dated April 8th Showa 31 (1956)
On the right – published April 1st of Showa 29 (1954) by the Aikikai Foundation
and authored by Koetsu Ueshiba, Wakamatsu-cho, Shinjuku-ku, Tokyo

The material will be familiar to you if you are already familiar with Morihei Ueshiba’s pre-war publications. The text is mostly a combination of text from both “Budo Renshu” and “Budo” (cleansed of most of the pre-war imperial language), with the bulk of the book (which totals some 150 pages) consisting primarily of hand illustrated techniques from “Budo Renshu”.

Why does this matter, except as a curiosity? Well, this work is significant because it shows that what Morihei Ueshiba was teaching in 1954 was the same as what he was teaching in 1933. That five years after he told Morihiro Saito in Iwama that he had “completed” Aikido…he was still distributing the same material, containing the same explanations and the same techniques that had given his students in 1933 – when they were firmly students of Daito-ryu Aiki-jujutsu.

In other words, the idea of a radical phase change in the technical core of Aikido after the war that is so commonly accepted…never happened.

This supports what Yasuo Kobayashi said about what he practiced during the early 1950’s at Aikikai Hombu Dojo in Tokyo:

Moderator: There were two books published before the war, “Budo” and “Budo Renshu”, was it only those techniques?

Kobayashi: Yes, that’s right. Of course, we did not do staff (jo) or sword (ken).

There is a discussion of this issue in “The Ueshiba Legacy, by Mark Murray” which you may like to read if you find this issue interesting.

This won’t be news to everybody, of course, Morihiro Saito used to carry a copy of the 1938 technical manual “Budo” with him while he was teaching so that he could show people that what O-Sensei had taught him in Iwama after the war most closely resembled what was represented in that manual published before the war, and not necessarily what was commonly being taught in other places. 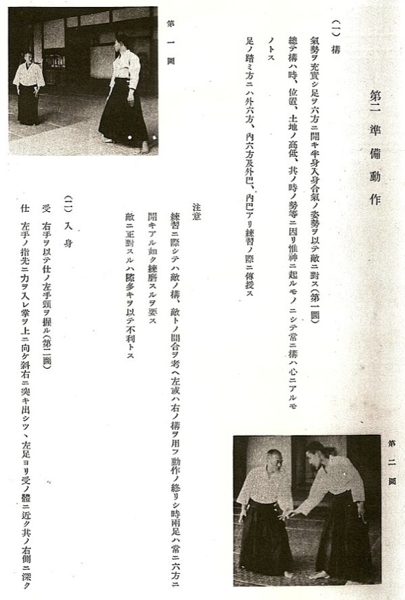 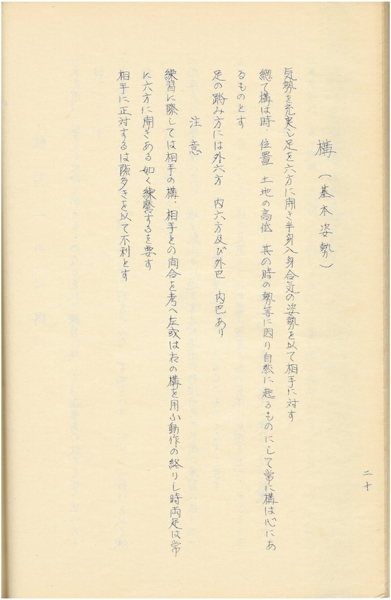 The identical instructions appear in the Kamae section of “Aikido Maki-no-Ichi”, 1954

What is news is that, for the first time, this 1954 work presents hard evidence that what Aikido Founder Morihei Ueshiba was teaching and distributing after the war in the 1950’s was essentially the same material that he was teaching and distributing before the war. That, while some things changed, of course, there was no phase shift in core technology, or radical invention of new martial technology.

We also have this very interesting study by John Driscoll, originally published on AikiWeb, the almost exact correlation between the techniques taught by Morihei Ueshiba and the techniques of the Daito-ryu Hiden Mokuroku shows the continuing technical links between the two arts.

And this good visual comparison of the pre-war and post-war technique of Morihei Ueshiba that illustrates this point quite clearly:

Last year I was talking to Scott Burke, who lives in Fukuoka, but often comes to Hawaii to join the Sangenkai workshops with Dan Harden. 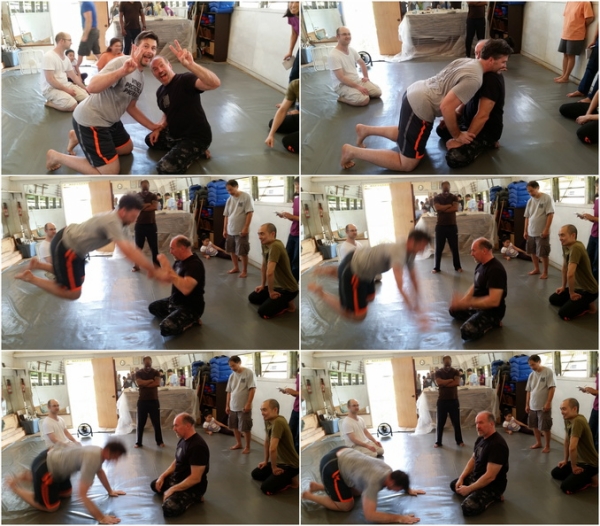 We got to talking about how riffling through old library archives led me to what I believe to be the oldest recorded interview with Morihei Ueshiba – the one contained in the article “A Leap of the Spirit – Moritaka (Morihei) Ueshiba in 1932“.

We talked about doing more of that kind of research (easier for Scott, since he’s actually in Japan), and Dan Harden encouraged the idea enthusiastically. 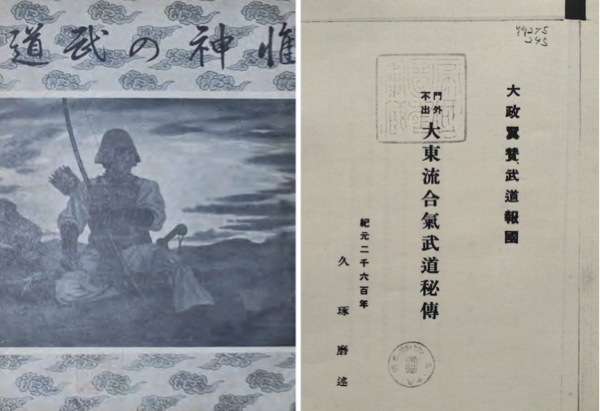 After returning to Japan he started frequenting the prefectural library and accessing the university library catalogs, and things started moving. In addition to things like “Kannagara no Budo – Daito-ryu Aiki Budo Hiden”, published in 1942 by Takuma Hisa (which he published about Daito-ryu, as a menkyo kaiden in the art, but duplicates large sections of the text in “Budo Renshu” and “Budo”), he also came across….”Aikido Maki-no-Ichi”.

And now you have too – here is the 150 page complete scanned edition of “Aikido Maki-no-ichi” in PDF format. Published in 1954 and edited by Koetsu Ueshiba. There is only one alteration, the name to whom this particular volume was dedicated has been omitted for reasons of personal privacy.