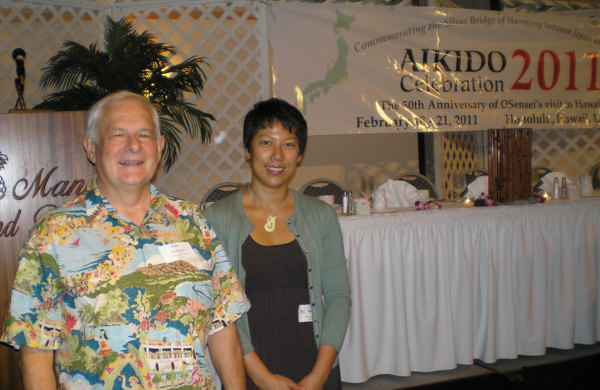 John Stevens at the Aikido Celebration 2011 banquet in Honolulu, Hawaii

A note from John Stevens

The other day (February 27th 2012) I posted a blog here entitled “Morihei Ueshiba, Budo and Kamae“. In that article I cited a quotation of the John Stevens translation of Budo, “Budo: Teachings of the Founder of Aikido“.

John Stevens has asked that I post a response from here, which I will do, along with my own response.

I was guided through the entire text of Budo by Shirata Rinjiro. Shirata Sensei demonstrated each technique on me, and gave me his interpretation of the book’s instructions. (In other words, I received kuden “secret transmission.”) I also had access to Shirata Sensei’s annotated copy of Budo. (It was the photocopy. The original that Sensei had received from Morihei disappeared in the chaos of WWII.) Regarding the passage in question, Sensei and I talked at length about the concept of roppo kamae. The term “flexible” was chosen to describe a good stance that is vital and solidly rooted yet at the same time a stance that allows one to respond immediately to any contingency. “Flexible stance” was also meant to include the sense of “whirling,” “swirling,” “twirling.”

Shirata Sensei—who received direct instruction from Morihei on the matter–interpreted a roppo kamae as one where the outer foot and the inner foot are opened at a 60-degree angle, as opposed to a 90-degree front foot and a 45-degree back foot. The roppo kamae is the basic stance that Morihei and Shirata Sensei assumed. It the same kamae I try to assume as I train and teach. This roppo kamae is nearly impossible to explain in words so one has to rely on, as Budo says, “oral instruction.” In fact the entire book needs to be explained by “oral instruction” from a qualified instructor (which Chris certainly is not.) In the final analysis, however, this principle should never be forgotten when discussing kamae: “If your mind is true, your kamae is correct.”

Honestly, reading through this response hasn’t really changed my thoughts as expressed in the original blog posting.

If you have a certain knowledge and background, then I think that his response really only strengthens the arguments that I made originally. If you don’t, then maybe that won’t be the case.

In either event, I hope that everybody will take this as a chance to re-think and re-examine the assumptions that they have held in the past. 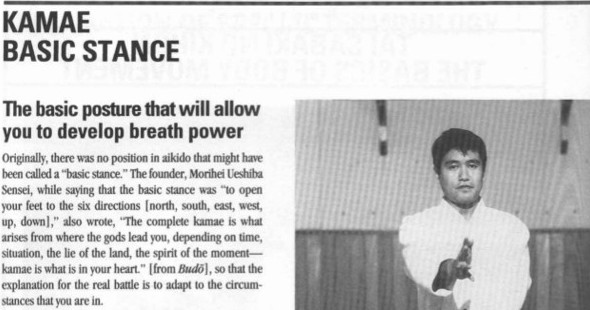 From “Total Aikido”, by Gozo Shioda and Yasuhisa Shioda

I will make a couple of points:

In closing, here is a comment on the blog posting that was posted (publicly) to Google+ and my response (both posted a week before I received John’s response). It more or less summarizes what I was trying to accomplish.

Great article. I have long felt that John Stevens is a well intentioned but unreliable translator. My knowledge of Japanese is very low, but when I have heard other interpretations of texts that Stevens has translated, I have always felt there was more depth in the text than Stevens is willing or able to present.

One of the problems is that Stevens is sometimes presenting his own technical interpretation as translation. In other books, he has said that the 60 degree angle stance can be observed in photos and films of Morihei Ueshiba, but this appears to be original research on his part. I see this as presenting ones own teaching as O Sensei’s.

As long as the translators are also prominent teachers or representatives of prominent teachers, these kinds of problems will creep in. The temptation to insert one’s own understanding, often well earned, for the intention of the author is too strong.

Christopher Li – John’s quite knowledgeable, he’s also a friend of mine and lives (literally) down the street from me, so I’m really not talking smack about him (even though that may appear to be the case).

John has always said that his goal was about providing access to the widest range of people possible. He’s done that so well that there are some sources (“Budo” for example) that are available in English, but not in Japanese!

On the other hand, that means that he’s had to make certain choices in translation to make things more or less understandable for a general audience – a “lite” version, so to speak. That doesn’t mean that the translation is necessarily bad – but that you have to understand the limitations under which it was done.

Any translation is going to be seen through the lens of the translator’s opinion, mine as much as John’s, so what we really need are more translations and more examination rather than acceptance by the population of a single version or versions as canonical.

Anyway, glad you enjoyed it! There should be more interesting things to come.

And I hope everybody enjoyed this follow-up as well! Still more interesting things to come…