Aiki Budo is the Way of Human Development

I was looking through Kisshomaru Ueshiba’s books “The Spirit of Aikido” and “The Art of Aikido” and I happened to notice that there is virtually no mention of Daito-ryu in either one. Of course, neither of them are historical works, but I thought it odd that there was no mention of the art that Morihei Ueshiba has studied for over 20 years, the only art that he was ever licensed to teach, the only art (outside of his own) in which he ever issued certificates of rank.

OK, moving along to “Best Aikido“, written by Kisshomaru Ueshiba and Moriteru Ueshiba. In this one there is a short mention of Daito-ryu as one of the many arts that Morihei Ueshiba studied, but no mention is made of the relative depth of study of those arts – the section entirely fails to note the fact that, with the exception of Daito-ryu, all of those arts were studied for very brief periods of time.

The section ends by implying that Morihei himself denied any substantial connection with Daito-ryu. This is a common theme, check out this article for another example of the sanitizing of the history of Aikido.

I know, this is kind of an old story – most people these days have been made aware of the great technical debt that Aikido owes to Daito-ryu, primarily through the efforts of Stan Pranin at Aikido Journal.

Additionally, in two previous posts, “Kiichi Hogen and the Secret of Aikido“, and “Morihei Ueshiba, Budo and Kamae” I explored the possibility of ties between the core training methods of Morihei Ueshiba and traditional Chinese martial training paradigms.

But what about the other half of the art – the great philosophical and spiritual repurposing of the martial arts that was supposedly implemented by Morihei Ueshiba?

Aikido has been called “The Way of Harmony” and “The Art of Peace”, a departure from the previous paradigm of brutal and destructive Japanese Budo.

According to the Aikikai Hombu dojo website “The goal of Aikido training is not perfection of a step or skill, but rather improving one’s character according to the rules of nature.”. Remember that, we’ll come back to it later.

But first, let’s go back to the 1400’s, to ancient Japan and Iizasa ‘Choisai’ Ienaoko, founder of Tenshin Shoden Katori Shinto Ryu.

The scrolls of the school open with this famous proverb from Choisai:

There there’s another common proverb from Choisai:

“Winning without drawing the sword is the foundation of Shinto-Ryu.”

There’s also Chujo-ryu, also from that same time period some six-hundred years before Morihei Ueshiba. In the secret transmission (秘伝) of Chujo-ryu “Heiho” (the “Methods of War” from above) is also written “Heiho” (平法) – “Methods of Peace”, explaining that “To love war is not the way”. This same principle is expressed in the first scroll of Itto-ryu, which would go on to become on of the major influences on modern Kendo (thanks to Itto-ryu practitioner Mark Hague for pointing that out).

Then we can fast forward to the 1600’s and the Life Giving Sword of Yagyu Munenori (from “The Life-Giving Sword: The Secret Teachings From the House of the Shogun“):

“At the heart of this work is the idea that the sword that kills people can, on the contrary, become a sword that gives them life. In a chaotic society, many people are killed for no reason. The Death-dealing sword is used to bring a chaotic society under control; but once it has been done, cannot that same sword become a Life-Giving Sword?”

And of course, we could also mention the Judo maxim of “自他共栄”（”mutual welfare and benefit”), which sounds pretty close (to me) to the Aikido maxim of “万有愛護” (“universal loving protection”).

Some people, like historian Karl Friday, have even argued that the traditional Japanese schools were, from the very beginning, focused on personal development (“Off the Warpath”, from “Budo Perspectives“).

So we see a pattern developing….

The plot thickens with these statements from Tokimune Takeda, the son of Morihei Ueshiba’s teacher Sokaku Takeda and the Soke of Daito-ryu Aiki Budo:

“The essential principles of Daito-ryu are Love and Harmony” “The goal of spreading Daito-ryu is ‘Harmony and Love’, keeping this spirit is what preserves and realizes social justice. This was Sokaku Sensei’s dying wish”

Then, we have Masao Hayashima (早島正雄), who trained with both Sokaku Takeda and Sokaku Takeda’s student Toshimi Matsuda. 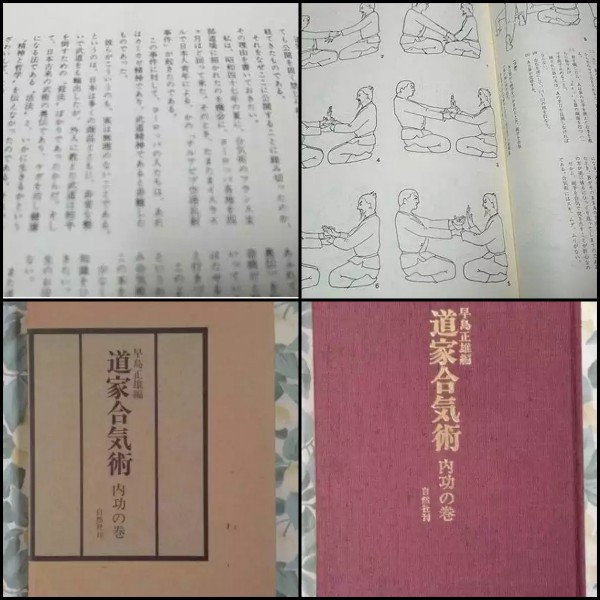 A teacher of Daoism and Daito-ryu, on the very first page of his book he states “Aiki-jutsu is said to be the Budo of Harmony”.

With that in mind, let’s move back to “The goal of Aikido training is not perfection of a step or skill, but rather improving one’s character according to the rules of nature.” (remember that from before?).

Here’s an interesting passage, first in Japanese, and then in English:

“Aiki Budo is the Way of Human Development”

Aiki is the fitting together of Ki.
Through this harmonious reconciliation all things under heaven and earth in the universe move peacefully without disturbance. This harmonization is Aiki.
As the Ki of Aiki is natural it unifies and reconciles without the slightest ill feeling or resistance.
The harmonious reconciliation that is Aiki must be the basis for the formation of human society.
This is the Great Circle of Harmony (Daienwa) of Aiki.
Through the principles of Aiki pacify and reconcile those threatening violence. Also when the enemy has already attacked, likewise transform and change according to the attack of the enemy through the principles of fitting together Ki and achieve reconciliation.
Enlightened people have received this transmission from the Founder, Shinra Saburo Minamoto Yoshimitsu, and must train devoutly in the basics of Aiki no Jutsu as well as Taijutsu (Yawara), Tachi no Jutsu, Sojutsu, and Bojutsu to attain the state where Aiki Budo is the Way of Human Development.

This very interesting passage is from a scroll written by Yukiyoshi Sagawa, that he hung on the wall of his Dojo. A picture of the actual scroll appears at the top of this article, and appears in Kimura Tatsuo’s book “Discovering Aiki” (“合気修得への道“) but, unlike most of the rest of the book, was not translated into English.

Yukiyoshi Sagawa was an interesting character. He was actually in the room when Morihei Ueshiba was introduced to Sokaku Takeda at the Hisada Inn in Hokkaido in 1915. Respect for him in the Daito Ryu community was so great that in 1954 the Takeda family actually asked him to succeed to the leadership of Daito-ryu, which he eventually refused.

Sagawa really had no contact with Ueshiba after 1915, did not belong to an “Aikido” organization or the lineage of Morihei Ueshiba, except that they both trained under the same teacher.

He was known to be openly critical of both Aikido and Aikido Founder Morihei Ueshiba.

And yet – the scroll hanging on the wall of his Dojo and describing his art could easily have been written by Morihei Ueshiba as a description of his own art of Aikido.

Perhaps then, Aikido is not the only art with a higher moral compass. That other arts have, for hundreds of years, professed the same or similar goals and ethics.

Does this change anything that Morihei Ueshiba did in his life?

Does it matter if he was the inheritor of a technical and philosophical tradition and not its originator?

Not really, everything that Morihei Ueshiba did he did even if he and his ideas weren’t unique.

Nothing that is said here lessens any of his skills or accomplishments.

Doesn’t the continuing effort to “enhance” the legend of the Founder actually do him more of a disservice than anything else? Worse, doesn’t it tend to stunt the efforts of those following him? Who, after all, can ever hope to follow in the footsteps of a god – and isn’t that what the deification of the Founder is really headed towards?

My real hope here is that this and other conversations like this will encourage people to examine the legend that has been built around the Founder and his art, and to realize that no harm can come to him from a more accurate rendering of history and his place in it.

Now, to finish up, a couple of notes on the translation of the above passage.

If you look at the first sentence “Aiki is the fitting together of Ki.” you may notice that I specifically did not translate “awasu” as “harmonize”。

“Awasu” is the same Kanji as “Ai” in “Aiki”, and as we all know this is often (usually?) translated as “harmonize”.

Although there are certainly some elements of “harmony” in the character, the actual meaning is one of “joining”, “matching” or “fitting together”.

The difference is important, in my opinion, to certain types of training.

Advocates of a certain type of training should recognize the implications of both of these choices in translation immediately.

7 thoughts on “Aiki Budo is the Way of Human Development”