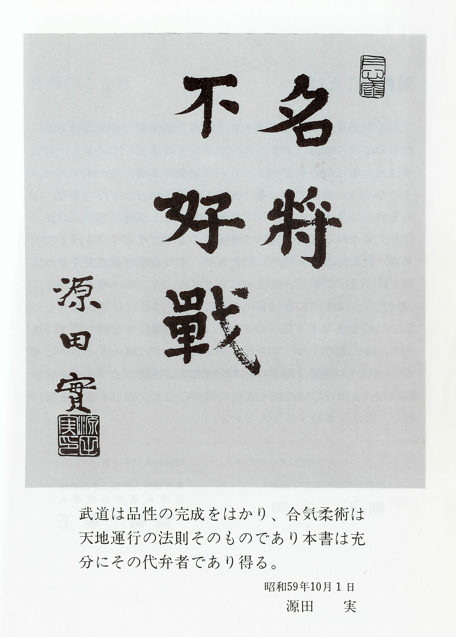 In the previous blog post, “Aiki Budo is the Way of Human Development“, I quoted from a scroll by Daito-ryu Aikijujutsu instructor Yukiyoshi Sagawa.

While browsing through some books that I hadn’t looked at in a while I came across the example above, which is also relevant to the discussion.

This calligraphy appears in the book “Introduction to Aikijujutsu”, by Seigo Okamoto. Seigo Okamoto was a student of Kodokai Founder Kodo Horikawa, and a Shihan in the Kodokai before leaving to found the Daito-ryu Aikijujutsu Roppokai. The book itself was written as an introductory textbook for university courses in 1984.

The text of the calligraphy reads “Great commanders have no liking for war”.

The commentary below the calligraphy itself reads:

“Budo is only for the perfection of character, and this book fully presents the Aikijujutsu that is itself the law of the movements of Heaven and Earth.”

“Become one with Heaven and Earth”

Or even better, still by Morihei Ueshiba, a definition of Aikido:

Once again, we see Morihei Ueshiba’s expression of Aikido in precisely the same terms used by the art the he spent over 20 years studying and teaching.