Of course, there’s more, a lot more, threaded all through Morihei Ueshiba’s lectures and essays. Once the connections are laid out I think that this will become clear – even obvious. What will also become clear is the training methodology being laid out, in no uncertain terms, by the Founder.

At the top of this post is a screenshot from a video showing Morihei Ueshiba lecturing on this very concept – you can see “Ichirei Shikon Sangen Hachiriki” (一霊四魂三元八力) written on the board behind him. The diagrams are important too, but I’ll talk about them in a future essay.

Here’s one of the things that Morihei Ueshiba said about “Ichirei Shikon Sangen Hachiriki”:

“Aikido is the way of harmony, that is to say the living form of Ichirei Shikon Sangen Hachiriki, the form of the fabric of the universe, specifically the form of the High Plain of Heaven.”

The “High Plain of Heaven” (“Takamagahara”) is the place where the gods were born – Heaven, so to speak. In this case Ueshiba is saying that Ichirei Shikon Sangen Hachiriki is created within yourself, as in this quote from “Takemusu Aiki”, page 77:

In other words, Aikido and Ichrei Shikon Sangen Hachiriki represent both the structure of the Universe and the structure of you yourself as an individual – or perhaps it would be more accurate to say, how you yourself should be constructed physically and mentally in order to attain an ideal state both martially and in life.

Quite a profound concept, if you can manage to wrap your head (and body) around it, I think, and a pretty neat package description of philosophical and technical Aikido.

The first section, “Ichirei Shikon” (“One Spirit, Four Souls”), is the structure of the spirit world. In Shinto cosmology humans possess one spirit and four souls – the turbulent (aramitama), the tranquil (nigimitama), the happy (sakimitama) and the wondrous (kushimitama). The “naohinomitama” is the one spirit that acts as kind of a container for the four souls.

Let’s leave that section aside for another day and concentrate right now on the physical structure of the Universe – and of Aikido technique, which also follows this pattern.

The second section, “Sangen Hachiriki” (“Three Origins, Eight Powers”), is the structure of the physical world, the physical self and the physical training methodology in Aikido.

The first part of that section is the “Sangen” (“Three Origins”), the three basic building blocks of the universe – heaven, earth and man, represented as hard, soft and flowing by the circle, triangle and the square (hence the name Aikido Sangenkai!).

Of course, everybody has seen the circle, triangle and square, but does Heaven-Earth-Man have anything to do with Aikido?

合気道は天地人和合の道と理なり。
“Aikido is the Way and Principle of harmonizing Heaven, Earth and Man.”

Coincidentally (or maybe not so…), one also unifies the Ki from Heaven and Earth with that of Man to form the Taiji, the “Grand Ultimate” in Chinese internal martial arts.

This leads us to a telling quote from Koichi Tohei’s book “気の確立” (“The Establishment of Ki”). It comes in the section where he discusses his break from the Aikikai:

Note that Koichi Tohei’s model follows Morihei Ueshiba’s quoted model, and that he (correctly, in my opinion) states that the process occurs within oneself rather than between oneself and another person – see the quote from Ueshiba on “Takamagahara” above concerning that point.

Whether Tohei correctly represents Kisshomaru Ueshiba’s opinions or not (and the ramifications) we’ll leave for a seperate discussion.

In Chinese cosmology the Universe begins with the Void, represented by an empty circle, the Enso. The void divides into two, the “In” (“Yin”) and “Yo” (“Yang”) opposing powers.

The Enso is often seen in Aikido artwork as well – and Morihei Ueshiba also said that the Circle is the Void. Here is another interesting quotation from Ueshiba:

“In this thing called Aiki, first describe (draw) a circle. Drawing a circle is, in other words, opposing powers. Without touching with even one finger your opponent will be sent flying. Just to be able to do this one thing takes about 10 years. Let’s try to advance quickly.”

Opposing powers, “In” and “Yo”, echoes of the same story cited in “Aikido ™ – Can it really be trademarked?” and “Kiichi Hogen and the Secret of Aikido” – when Henry Kono ask O-Sensei “Why can we not do what you do, Sensei?” the answer was quite simply “Because you don’t understand In and Yo.” (from “Aikido Memoirs” by Alan Ruddock).

According to Chinese theories, when the circle (Wuji, the Void) divides in two and is joined by Man you get the “Grand Ultimate” – the basic “In” (“Yin”) and “Yo” (“Yang”) opposing forces divided/united by a curving line represented in the Taiji symbol – Heaven and Earth united/divided by Man. 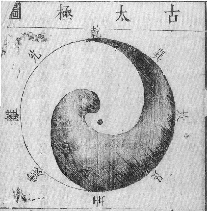 Note the similarity of the above diagram to the first diagram of the Taiji by Zhang Huang. The above diagram appeared in a privately published work by Bansen Tanaka entitled “Aikido Shinzui” in 1976 (no relation to the later work published by the Aikikai). Bansen Tanaka was a pre-war student (from 1936) of Morihei Ueshiba, and continued to host Ueshiba on his frequent trips to Osaka after the war.

The Kanji at the top right read “The Void”. The Kanji on the bottom right read (“the thickness of a single piece of paper”). The Kanji in the right side of the diagram read “Emptiness” and “Matter” (i.e. “Heaven” and “Earth”).

In the center is the single Katakana character “Yu”, which in Kotodama terms stands for the harmony of Fire and Water (i.e. “In” and “Yo”). It has been pointed out that the character may also by “Su” (I blew it up, but I can’t tell in my scanned copy) – in Ueshiba’s cosmology “Su” pierces the void and moves to “U”, which manifests as the two “In” and “Yo” opposing forces.

When you see the yin-yang symbol in China it is often surrounded by eight trigrams. These represent the “eight powers” of Chinese internal martial arts, which are the eight different ways that yin and yang interact to create power, or “jin”. This is so important in China that an entire internal martial art (Ba Gua) was actually named after it, and that Taiji was originally known as the “13 Postures” – 8 powers combined with 5 basic directions.

In Morihei Ueshiba’s structure of the Universe the “Hachiriki”, or 8 powers/forces, are an active force, a quiet force, a pulling force, a loosening force, a splitting force, a combining force, a melting force and a congealing force (you can see that each “in” force has a matching “yo” force).

You may recognize the numbers from “Kiichi Hogen and the Secret of Aikido“. There’s more on the eight opposing forces and the way that they relate that’s important to Aikido – but we’ll get into that another time.

“I think that if you cannot understand Ichirei Shikon Sangen Hachiriki, breath (kokyu) and Aiki, then even if you practice Aikido the true power of Aikido will not come forth.”

26 thoughts on “Aikido and the Structure of the Universe”