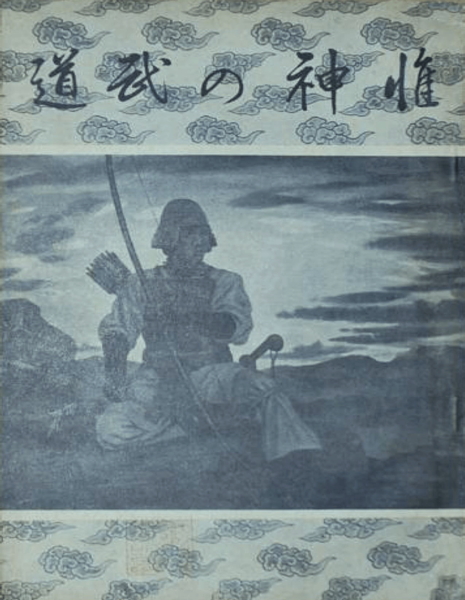 “In the spring of 1933, the bureau chief of the Asahi News sales office, Mr. Mitsujiro Ishii, who is presently the Minister of Justice, introduced us to Morihei Ueshiba Sensei, vouching for him as an expert on a par with the founder of judo [a reference to Jigoro Kano]. He recommended to the person in charge of security that we learn aikijujutsu from Ueshiba Sensei. Mr. Ishii was a leading figure at the Asahi News and had tremendous influence, so while it was supposedly a “recommendation,” it was really more like a supreme command. Since those of us in the General Affairs section were responsible for security, we very much welcomed Ueshiba Sensei, and we began learning at the Asahi Budo Dojo.”

Born in Kochi Prefecture in 1895, he made a name for himself as a sumo wrestler during his time as a student before going on to become the Director of General Affairs of the Asahi News corporation in Osaka. 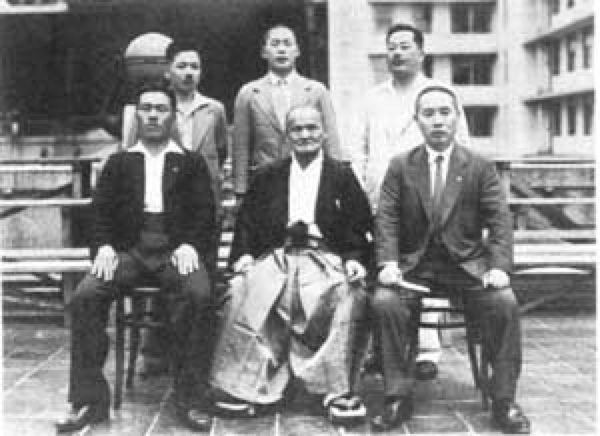 Here is the classic (and oft-repeated) story of how Takuma HIsa met Sokaku Takeda, in his own words:

On June 21st 1936, when we were training in Aikido under Ueshiba Sensei, a man came to the headquarters reception desk thrusting an iron staff suddenly with his right hand and holding a fine sword in his left “I am the Founder of Daito-ryu Aiki-jujutsu, Soke Sokaku Takeda. I have heard that you lads are learning from my student Morihei Ueshiba, but he is still inexperienced. If you have the will to learn true Aiki-jujutsu then become my students now and learn from me!”. Before anybody could say a word he took the security guards into the dojo. Keeping the fact that I was the division head a secret, I snuck in after the security staff and was astonished to see the reality of Takeda Sensei’s secret techniques. I went to Ueshiba Sensei right away and informed him of the appearance of the Soke, Takeda Sensei. I thought that Ueshiba Sensei would immediately go to beg his teacher’s pardon, but contrary to my expectations he became extremely dismayed and ended up withdrawing! So it came about that Ueshiba Sensei’s students would receive instruction in the early morning as before at the Umeda dojo, and then in the afternoon we would train with Sokaku Takeda Sensei in the night duty room of the headquarters building. At some point he left for Tokyo without any farewell to Asahi whatsoever, but Sokaku Takeda Sensei became increasingly committed and started to appear with Mr. Tokimune Takeda. According to the records:

He gave us the certificates and left for Hokkaido. As I look back now, it is almost fifty years since I began to learn Aikido. During that time, beginning with both Takeda Sensei and Ueshiba Sensei, then Director Tonedate and Security Chief Yoshimura, everybody has passed away. I am the only one left alive. I am eight-four this year, and have been stricken with paralysis, but I would like to use what strength I have left to transmit these techniques to future generations and somehow repay my debt to my Sempai. 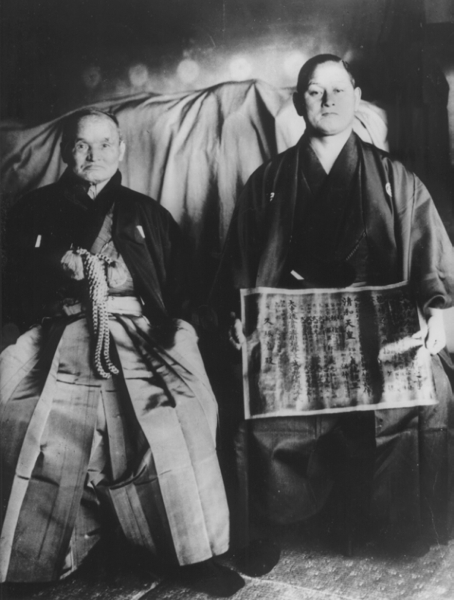 After the war he would go on to establish the Takumakai, but before that, one year after receiving Menkyo Kaiden from Sokaku Takeda, he published a book on Daito-ryu – “Kannagara no Budo, Daito-ryu Aiki Budo Hiden” (惟神の武道・大東流合気武道秘伝). Representing what may have been the most comprehensive manual on Daito-ryu published until that time, the title page specifies that the volume is not to be distributed to non-students.

Interestingly, Takuma Hisa excerpted large portions of the technical explanations directly from Moritaka (Morihei) Ueshiba’s 1933 technical manual “Budo Renshu” (see “Aikijujutsu Densho – AKA Budo Renshu, by Moritaka Ueshiba“). Further, although Hisa’s volume consists of photographs rather than drawings, it’s clear that many of the techniques themselves are identical.

This ought not to be surprising, since what Morihei Ueshiba was teaching at the time was, without question, Daito-ryu. This was clearly stated by Yoshio Sugino, who was a student at the time and a contemporary of Takuma Hisa – “Of course Aikido was with Ueshiba Shihan – when I was studying it was still called Daito-ryu Aiki-jutsu” (“Interview with Yoshio Sugino of Katori Shinto-ryu, 1961“).

Takuma HIsa had an extraordinary opportunity to compare the teachings of his two instructors – Daito-ryu Chuku-no-so Sokaku Takeda and Aikido Founder Morihei Ueshiba:

Takeda’s instruction gave Hisa the chance to compare the techniques that he had been taught for the previous three years (1933-1936) by Ueshiba with those taught by Takeda. His conclusion was that they were the same—meaning that Ueshiba had not by that time significantly modified or evolved what he had been taught by Takeda. In later years, Hisa was adamant about Ueshiba’s and Takeda’s techniques being identical. He stated this clearly at a round table talk, “When Tomiki came to Osaka to teach aiki-bujutsu to the Asahi people, the techniques that both master Ueshiba and Takeda taught were the same. Definitely the same. Master Ueshiba should say that he was taught them by master Takeda. He should say that it was Daitoryu. But he never said that. Mr. Tomiki (who also traveled from Tokyo to Osaka to teach Ueshiba’s system at the Asahi dojo) knows this, doesn’t he. But Ueshiba never said it.” And Tomiki answered, “Definitely not. ‘I [Ueshiba] established everything…[smiling mysteriously]’. However old martial artists would often do that way.” [Shishida (Ed.), 1982, p.1]

“The Process of Forming Aikido and Japanese Imperial Navy Admiral Isamu Takeshita: Through the analysis of Takeshita’s diary from 1925 to 1931”
– Fumiaki Shishida (Waseda University, Tokyo, Japan)

Thus, it should not be surprising that the explanations of principle and technique that Takuma Hisa learned from Morihei Ueshiba in 1933 should be repeated in his volume documenting the teachings of Sokaku Takeda published in 1940.

In 1954 (five years after he told Morihiro Saito in Iwama that he had “completed” Aikido) Morihei Ueshiba published a book that he distributed privately to his students. This book was mentioned by Aikido 10th Dan Michio Hikitsuchi during the course of this interview:

Is our current style of practice different from that when you started?

Yes, the waza were done differently. You know, the other day I pulled out a book, Maki-no-Uchi. That was O-Sensei’s first book. We practised along the lines described in Maki-no-Uchi. ‘

Did O-Sensei distribute that book?

No. To have it, you had to have O-Sensei’s permission. For me, that was when I reached what would now be called shodan.

Was it a secret book, something that was never shown around?

Well, I don’t know whether I would call it “secret”. It was, after aIl, a book, and there probably are people who can learn just by reading. But it would have been very hard for someone to read the book end understand what it was about unless that person were practicing Aikido. Unless you were shodan or higher, you wouldn’t know what to make of it. I think that is still true today. It’s not as if you can tell someone, “Here, do it as the book shows.” Aikido is something that becomes a part of you – something that comes through the spiritual training [shugyo] of physical practice [keiko].

First, it’s important to note that the techniques pictured in the two volumes by Morihei Ueshiba are virtually identical, and are duplicated in many cases by the photographs in Takuma HIsa’s volume: 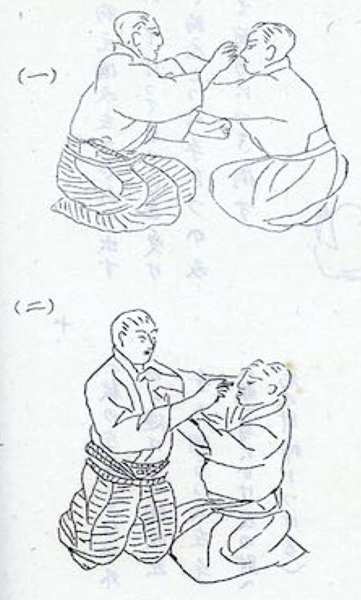 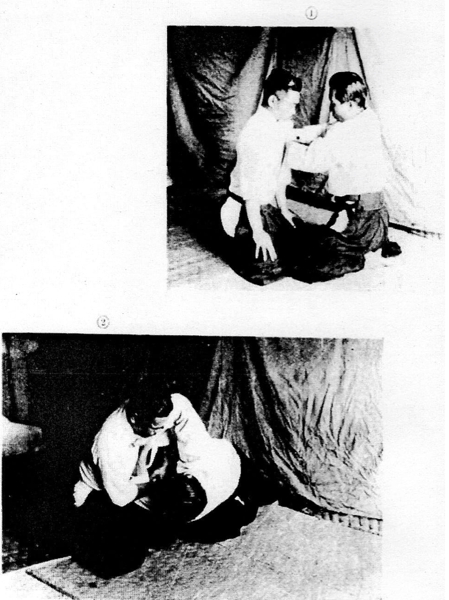 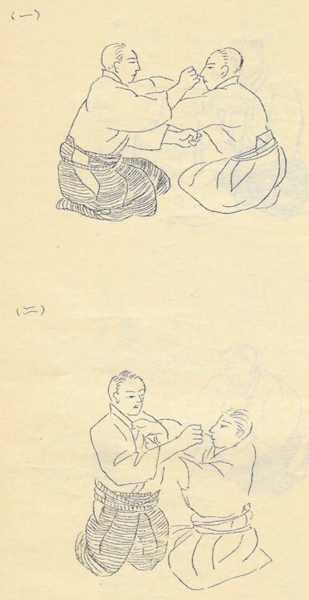 Next, and perhaps more telling, is that the technical explanations given by Moritaka (Morihei) Ueshiba in 1933 in “Budo Renshu” are duplicated verbatim in Takuma Hisa’s volume – but they are also duplicated verbatim in Morihei Ueshiba’s 1954 volume “Aikido Maki-no-Ichi“. That is, there was virtually no change in either the technical depictions or explanations over a 21 year period, and there was no variation even when the volume in question was discussing Daito-ryu and not Aikido (although, for what it’s worth, Takuma Hisa often referred to his art as simply “Aikido”).

What does that mean?

Well, as I previously argued in “Budo – Moritaka Ueshiba’s 1938 Technical Manual“, all of this lends support to the argument that the radical phase change to the technical core of Aikido that is so commonly accepted to have occurred after the war…never happened. Or perhaps, it happened, but not at the behest of Morihei Ueshiba.

This is further affirmed by Yasuo Kobayashi Sensei’s testimony as to the content of his training with Morihei Ueshiba when he entered Aikikai Hombu Dojo in 1954:

Moderator: There were two books published before the war, “Budo” and “Budo Renshu”, was it only those techniques?

Kobayashi: Yes, that’s right. Of course, we did not do staff (jo) or sword (ken).

There is a discussion of this issue in “The Ueshiba Legacy, by Mark Murray” which you may like to read if you find this topic interesting.

Here is a good visual comparison of the pre-war and post-war technique of Morihei Ueshiba that illustrates this point quite clearly:

Also of interest is this very interesting study by John Driscoll, originally published on AikiWeb, showing the almost exact correlation between the techniques taught by Morihei Ueshiba and the techniques of the Daito-ryu Hiden Mokuroku – 82% according to this study, although that percentage would undoubtedly be much higher if the comparison were carried out against Morihei Ueshiba’s 1954 volume “Aikido Maki-no-Ichi” rather than the modern Aikido curriculum spread by the Aikikai in the post-war years.

…and here comes the download – this freely available PDF formatted version of “Kannagara no Budo, Daito-ryu Aiki Budo HIden” is available through the efforts of Scott Burke, who lives in Fukuoka, but often comes to Hawaii to join the Sangenkai workshops with Dan Harden.Many thanks to Scott, and kudos for his continuing series of “Aikileaks”.

I hope that you enjoy it!