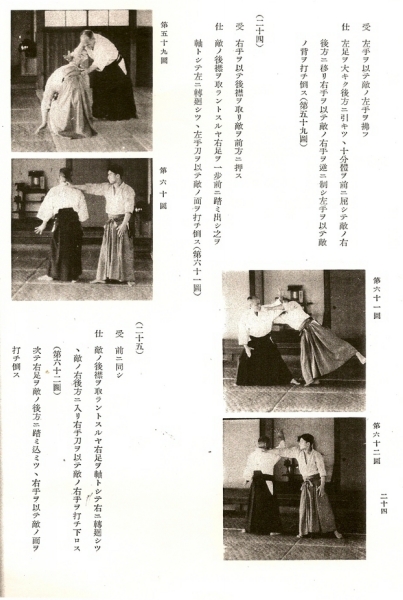 First there was “Budo Renshu” (武道練習) in 1933 (published in English under the name “Budo Training in Aikido“), which was given to select students at Moritaka Ueshiba’s pre-war Kobukan Dojo as a teaching license. This work includes pictures of techniques hand drawn by Takako Kunigoshi and explanatory text assembled and edited primarily by Kenji Tomiki. 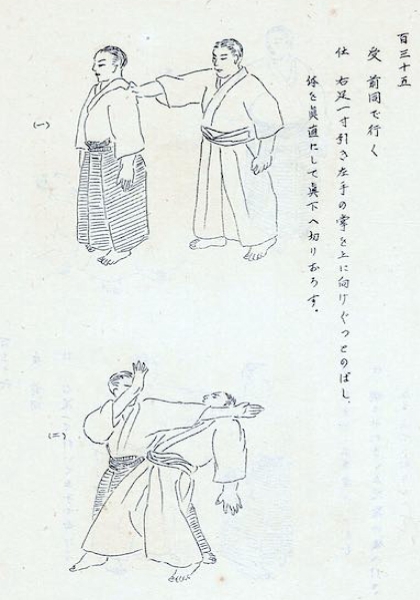 At the time of its publication and through the end of World War II Aikido Founder Morihei Ueshiba used the name “Moritaka” – a name he received through his relationship with Onisaburo Deguchi (出口王仁三郎), from the word “shukou” (“Moritaka” can also be read “shukou”) that appeared in Deguchi Seishi’s Norito (祝詞, “Shinto prayers”).

Don’t worry if you don’t have a copy, the PDF formatted version is freely downloadable from “Aikijujutsu Densho – AKA Budo Renshu, by Moritaka Ueshiba” 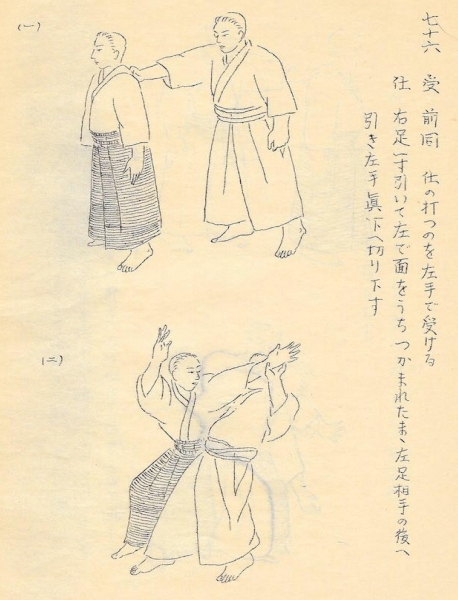 In 1954 Morihei Ueshiba published “Aikido Maki-no-Ichi”, edited by Ni-Dai Doshu Kisshomaru (Koetsu) Ueshiba. This book duplicated many of the pictures and most of the text of the earlier 1933 manual “Budo Renshu”.

Again, don’t worry if you don’t have a copy, the PDF formatted version is freely downloadable from “Aikido Maki-no-Ichi – O-Sensei’s First Book on Aikido“.

Thank you for visiting the Aikido Sangenkai blog. You can show your appreciation and support the distribution of more free content by donating today!

In between the above two works, in 1938, Morihei Ueshiba privately published another book, a technical manual called “Budo”, for Prince Kaya Tsunenori, who was one of his students at the time. This manual was (re) discovered entirely by accident in 1981 when Aikido Journal editor Stanley Pranin was shown a copy by Zenzaburo Akazawa during the course of conducting an interview. 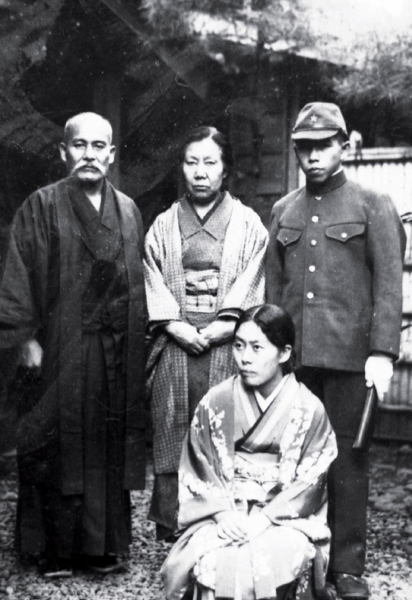 I’ve discussed parts of this book before, in articles such as “Morihei Ueshiba, Budo and Kamae” (if you’re interested, the injunctions about “six directions” in “Budo” are repeated in “Aikido Maki-no-Ichi”) and the following parts two and three.

Strangely enough, “Budo” has never been published in Japanese (wthe Morihiro Saito commentary contains both Japanese and English, but omits much of the original text).

Do I have to say “don’t worry if you don’t have a copy”? Well don’t, because the PDF formatted version of the 1938 technical manual will be freely downloadable below. This is the Japanese version, of course, so you may want to refer to the two editions above with regards to the English translation and commentary. This copy was originally posted by Eric Grousilliat on his French language Budo Shugyosha blog.

Like “Budo Renshu”, “Budo” was often distributed to students as a licensing document. 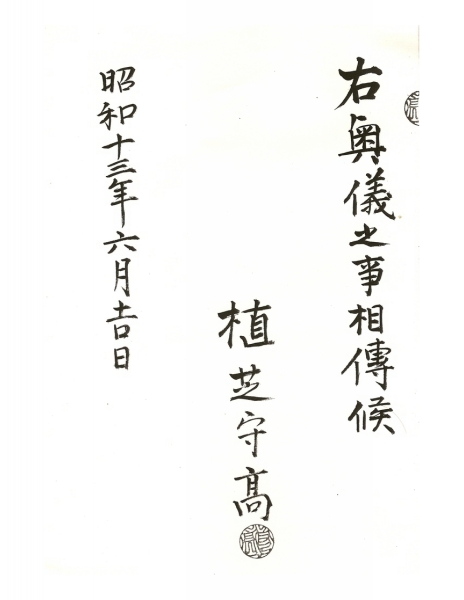 The Last Page of “Budo”

On the last page of “Budo”, displayed above, we can see that this copy was issued by Moritaka Ueshiba in 1938 as a licensing document. The text on the right confirms that this document certifies the transmission of “Ogi no Koto” (奥義之事 / “Inner Mysteries”). This may likely be in imitation of the Daito-ryu “Hiden Ogi no Koto” scrolls that Morihei Ueshiba both received from his instructor Sokaku Takeda and distributed to students such as Kenji Tomiki and Minoru Mochizuki. 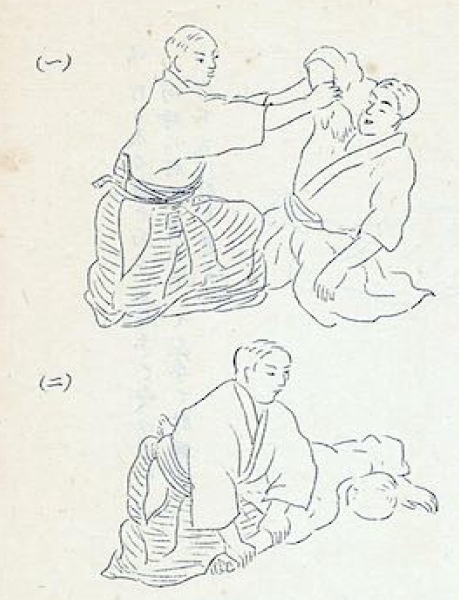 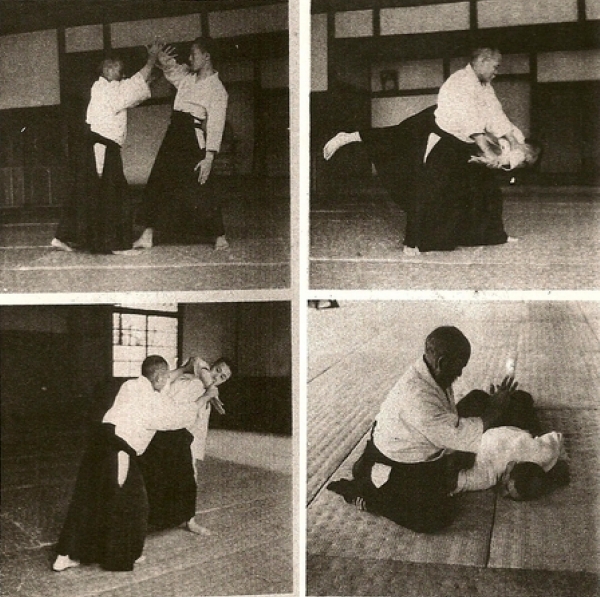 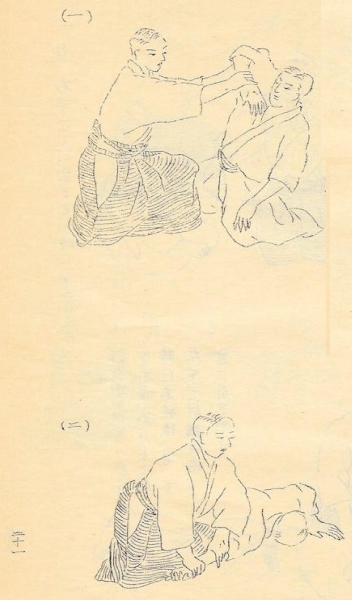 If you chance to examine and compare the text of the three volumes, which give very detailed and complete explanations of Morihei Ueshiba’s technical principles, you will find something similar – the textual explanations are consistent and continuous across all three volumes.

This is significant because it shows that what Morihei Ueshiba was teaching in 1954 was the same as what he was teaching in 1933 and in 1938. It shows that five years after he told Morihiro Saito in Iwama (in 1949) that he had “completed” Aikido…he was still distributing the same material, containing the same explanations and the same techniques that had given his students in 1933 – when they were firmly students of Daito-ryu Aiki-jujutsu.

Further, we have Morihiro Saito’s repeated testimony that what the Founder taught him in Iwama in the 1960’s most closely resembled what appears in the publication “Budo”, from 1938.

“I once doubted that Saito Sensei’s methods were closely rooted in O-Sensei’s teachings because of the apparent differences in their execution of techniques. I based myself on the Founder’s demonstrations in the films from his final years where he performed very few techniques, many of them involving little contact with his uke. On the other hand, Saito Sensei’s aikido was precise, martial and technically diverse. However, I was forced to reevaluate my opinion on this key point following the discovery of O-Sensei’s 1938 technical manual “Budo” where photos of several key basic techniques are virtually identical to the aikido forms taught by Saito Sensei in Iwama. My later exposure to the more than 1,000 photos from the Noma Dojo series of 1935 reinforced this change in my thinking.”
– Stanley Pranin, Aikido Journal editor
“The Iwama Aikido Conundrum“

There is another important person, Takuma HIsa, who had a chance to compare the teachings of his two instructors – Daito-ryu Chuku-no-so Sokaku Takeda and Aikido Founder Morihei Ueshiba:

Takeda’s instruction gave Hisa the chance to compare the techniques that he had been taught for the previous three years (1933-1936) by Ueshiba with those taught by Takeda. His conclusion was that they were the same—meaning that Ueshiba had not by that time significantly modified or evolved what he had been taught by Takeda. In later years, Hisa was adamant about Ueshiba’s and Takeda’s techniques being identical. He stated this clearly at a round table talk, “When Tomiki came to Osaka to teach aiki-bujutsu to the Asahi people, the techniques that both master Ueshiba and Takeda taught were the same. Definitely the same. Master Ueshiba should say that he was taught them by master Takeda. He should say that it was Daitoryu. But he never said that. Mr. Tomiki (who also traveled from Tokyo to Osaka to teach Ueshiba’s system at the Asahi dojo) knows this, doesn’t he. But Ueshiba never said it.” And Tomiki answered, “Definitely not. ‘I [Ueshiba] established everything…[smiling mysteriously]’. However old martial artists would often do that way.” [Shishida (Ed.), 1982, p.1]

“The Process of Forming Aikido and Japanese Imperial Navy Admiral Isamu Takeshita: Through the analysis of Takeshita’s diary from 1925 to 1931”
– Fumiaki Shishida (Waseda University, Tokyo, Japan)

The explanations of principle and technique showing what Takuma HIsa learned in 1933 (“Budo Renshu”) are repeated in 1938 (“Budo”), which Morihiro Saito testified was what Morihei Ueshiba was teaching in Iwama in the 1950’s and 1960’s. This is supported by the fact that the identical explanations and techniques appear in 1954 (“Aikido Maki-no-ichi”), in a volume distributed by Morihei Ueshiba long after the war.

All of this lends further support to the argument that the radical phase change to the technical core of Aikido that is so commonly accepted to have occurred after the war…never happened. Or perhaps, it happened, but not at the behest of Morihei Ueshiba.

There is a discussion of this issue in “The Ueshiba Legacy, by Mark Murray” which you may like to read if you find this interesting.

One last tidbit before we proceed to the download… 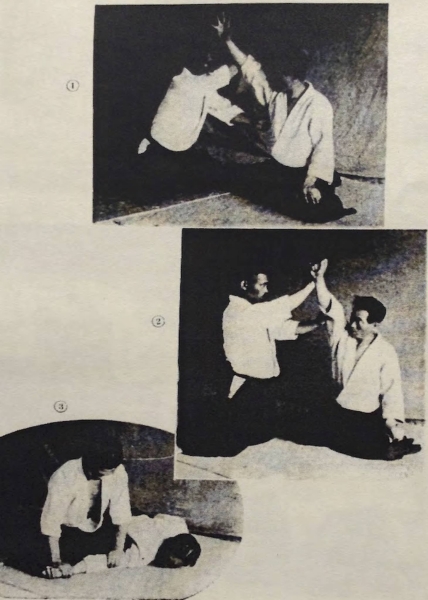 Here we have the same technique appearing in Takuma HIsa’s “Kannagara no Budo – Daito-ryu Aiki Budo Hiden”, published in 1942. Takuma Hisa received Menkyo Kaiden in Daito-ryu from Sokaku Takeda in 1939. Interestingly, he gives there the same exact explanation (word for word) about Shomenuchi in this book about Daito-ryu that Morihei Ueshiba gave in “Budo Renshu” in 1933…which is also the same exact word for word explanation that appears in “Aikido Maki-no-Ichi” in 1954.

“Strike while exercising the technique of the unity of opposites (陰陽合致) in the hand-sword.”