“Sensei, you are so small!”

In “Morihei Ueshiba: Untranslatable Words” we explored one of Koichi Tohei’s experiences during the 1961 visit to Hawaii by Aikido Founder Morihei Ueshiba.

For those that are interested, Koa Kimura’s photo journal of O-Sensei’s visit to Hawaii is available on the Aikido Hawaii website.

Koichi Tohei originally visited Hawaii in 1953, at the invitation of the Hawaii branch of the Nishi Health System.

Between 1953 and the opening of the Honolulu Aiki Dojo in 1961 Aikido experienced an explosive growth in the Hawaiian islands – the Hawaii Aikido groups were even able to raise funds to send to Japan for the repair of the Aikikai hombu dojo, which had been damaged in the bombing of Tokyo during WWII. 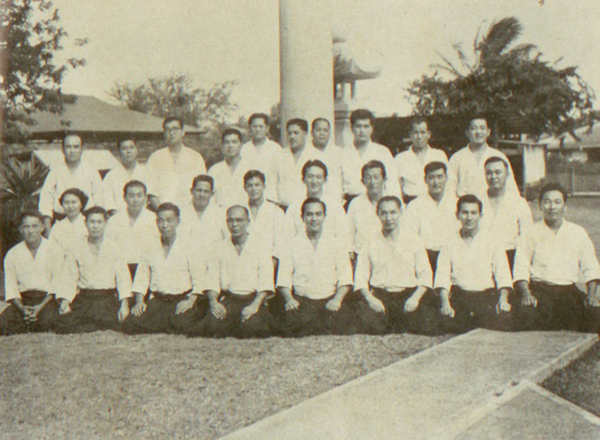 “Hawaii Aikikai Instructors” from the 1959 book “Aikido” by Koichi Tohei

As I mentioned in “Morihei Ueshiba: Untranslatable Words“, Koichi Tohei published an interesting book called “Nakamura Tenpu and Ueshiba Morihei: The Establishment of Ki” in 1999 (Japanese only). 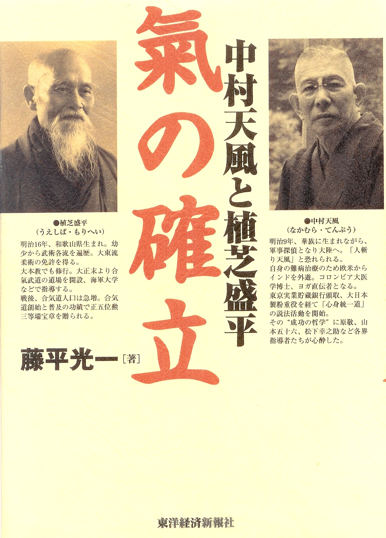 “Nakamura Tenpu and Ueshiba Morihei: The Establishment of Ki”

Here’s another translated section from that book, in which Tohei discusses some of the circumstances surrounding his first trip to the United States:

After I went to war, it seemed to me that the Japan that I saw upon my return had lost something important. The authority of Amaterasu O Mikami had fallen by the wayside, and the schools had become filled with communists and teacher’s unions.

However, I could not just hold onto this feeling of lost hope. Thoughts of loss just give rise to negative thoughts and do not produce anything of meaning. For that reason, I urgently felt that Japanese must once again engage in questions of the spirit.

If no-one would do it, I would do it. That is how strongly I felt about it. In Aikido, if the heart is not correct then the body cannot move correctly. Further, after the war I made the acquaintance of Tenpu Nakamura, and that played a great influence in my conviction that it was a problem of the spirit.

In any case, my specialty was Aikido. For that reason, I continued practicing at the Dojo while hoping to teach matters of the spirit through Aikido. However, at that time people were simply concerned with matters such as getting enough to eat – nobody was willing to listen to me long enough to discuss things such as Ki or the spirit.

Around this time a person named Norito Fujioka came to Japan from Hawaii to study. When he heard of my thoughts, he immediately started asking me to come visit Hawaii.

When I asked why, this is what he said:

“The Nisei (second generation Japanese born to the first generation, Issei, Japanese immigrants) living in Hawaii all look down on Japan. The Issei told them that Japan is a good country when they were raising them, but when they came to Japan with the occupying forces they were unable to see anything worthwhile in the Japanese. Certainly, everywhere in Japan has been reduced to burnt out fields, and people who think of nothing but themselves have proliferated everywhere. It is a fact that some of them cannot even be seen as human beings. However, it is a big problem that the Nisei have lost hope and simply decided that there is no future for the Japanese. This kind of misunderstanding will have grave consequences for the future.”

Conversely, according to him, it seemed that Americans had more respect for the Japanese.

There was deep interest in the psychology of Japan – “Why were such a tiny people, from such a tiny nation, able to engage the world in such a long war? Perhaps there is something in Japan that doesn’t exist in America?”

I was completely astonished to hear this.

Nothing could be this ironic – Japanese simply discarding Japanese culture, while Americans were studying Japanese Tea Ceremony and Zen.

It is because Mr. Fujioka came out of this era that he wished to have someone who would be able to explain the currents of the mind and explain the human spirit come to Hawaii.

I also thought that I must go, and so took the first step in preparing for a trip to Hawaii.

Making the Power of Aikido Known

There is one more important factor behind my decision to go to Hawaii.

However much I spoke of Ki, the Japanese of that time refused to listen to me. Part of the reason was that the national consciousness was turned towards the foreign nations. It was a time when domestic products were ignored – no matter what it was, people were thankful to have it if it was a foreign product. Perhaps that has not changed all that much, even to the present day, but in any case, it was a time in which it can be said that all of Japan was imitating America.

So I thought – what would happen if I went to America and spread Aikido and Ki there? Certainly, the Japanese would turn back to something that had been approved by the Americans. Perhaps that would be the quickest route to my goals. This would hit the spot dead center, after going to Hawaii to teach Aikido as planned and revealing spirit and Ki, when I eventually returned to Japan enthusiasm for Aikido there had also surged.

In any case, in February of Showa year 25 (1953) I was on a ship headed for Hawaii. My uncle, a Rear Admiral in the navy, said there would be things like ogres and bears there. I was warned that I might be killed, so I should not make the mistake of participating in any matches. I could not think of a response.

That baptism occurred soon after I arrived in Hawaii.

The Hawaiians spoke without restraint, and the first thing that they said was “Sensei, you are so young!”. Next was, “Sensei, you are so small!”. The third thing they said was, “Sensei, can you really do martial arts?”. The people who came out to meet me had heard that an expert in Aikido was coming, so many of them imagined some kind of a giant with a beard. If such a tiny person as myself was an Aikido expert, than many people worried that Aikido was just some kind of a fraud or make-believe (I was only 162 centimeters tall and weighed 65 kilos at the time).

My job was to begin with calming these fears and showing the power of Aikido.

“No matter how much I say that Aikido can do something, all of you must still have worries. If that is so, could you gather 10 men who have reputations for strength in Hawaii?”

When I suggested that, a group of people with pride in their strength gathered right away.

All of them had fourth or fifth dans in Judo or Kendo as a matter of course, and there were pro-wrestlers weighing more than 100 kilos.

I told them all to attack me in any way that they pleased, and then threw them and held them down easily one after the other.

As a result, they accepted that what I was doing was real, and sat in front of me on their knees to become my students.

Eight months after I arrived in Hawaii the Hawaii Aikikai was established, and I became a permanent captain in the police force.

Just a couple of after-thoughts…

If you think that the above story shows a…”healthy”…amount of ego, then you’re probably right, that’s the same way that it came across to me.

On the other hand, the account of his “baptism” are, from what I understand, more or less accurate.

I did think that it was interesting that both he and Fujioka took it for granted that the Americans of Japanese Ancestry (the Nisei) were somehow a separate group from the “Americans”, and discussed them in that context.

And then — “communists and teacher’s unions” – this just points out the fact (often overlooked) that Ueshiba and those around him were heavily associated with the right wing in Japan. These links continued after the war, although the Aikikai tends to downplay them greatly.

One thought on “Koichi Tohei: Aikido Comes to Hawaii”