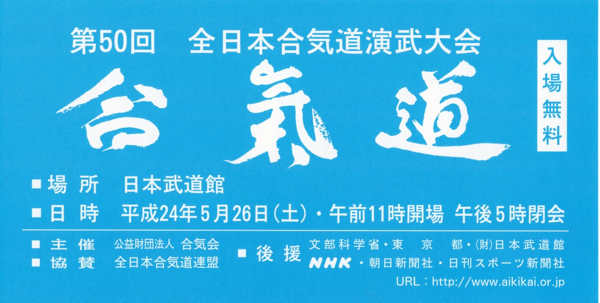 The 50th All Japan Aikido Demonstration

May 26th, 2012 marked the 50th All Japan Aikido Demonstration (第５０回全日本合気道演武大会) in Tokyo, at the Nihon Budokan.

The All Japan is the biggest event of the year for Aikikai, and groups come from around Japan and around the world to attend. It is attended by thousands of spectators and demonstrators.

But did you know that much of the motivation for these huge Aikikai events was actually provided by the Yoshinkan?

At the end of the war the Wakamatsu-cho Aikikai dojo (the Kobukan Dojo before the war) was one of the few buildings still left standing after the bombing. Even so, the roof was badly damaged, many of the tatami mats were missing, and refugees were actually living in the dojo.

Morihei Ueshiba was living in Iwama and rarely came to Tokyo. 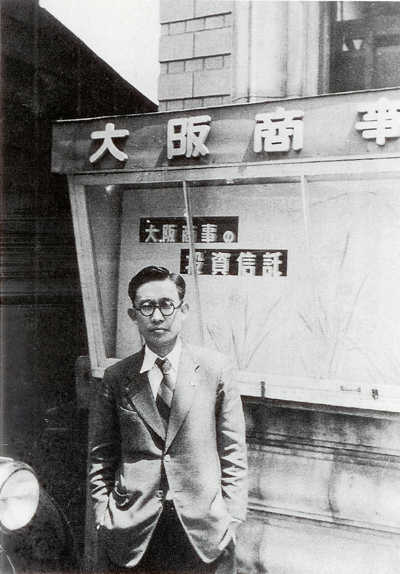 Kisshomaru Ueshiba was working in a trading company to raise money for repairs. It was to prove a new experience for him in many ways. One of his first tasks was to take a check for deposit at the bank. Since he had never entered a bank in his life he had no idea what to do, so after taking a number to wait his turn he handed over the check and the company bankbook to the teller and then returned to his office without the bankbook and handed his boss the tag with the number he had taken!

At that time there were three classes per day held at the Wakamatsu-cho dojo, which was now open again for training on a limited schedule. Kisshomaru would instruct in the mornings and evenings, but would often sneak out of his company and return to the dojo by taxi to take over the daytime class when no one else was available to teach. There would be very few days when he received no calls at his office about the dojo. 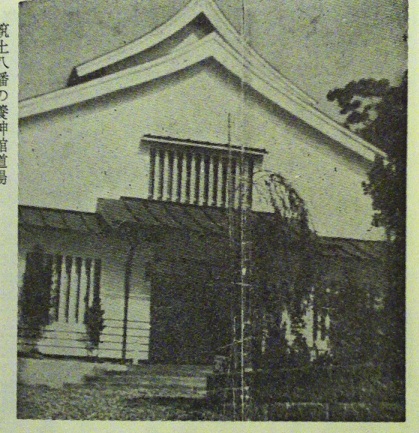 In the midst of this situation, Yoshinkan Aikido was established by Gozo Shioda in June 1955.

Q: Could you recall a little bit about what it was like when you first began?
A: At that time the Founder almost never emerged from Iwama. At the most, practice at hombu was about 5 or 6 people, at the worst I was there by myself sometimes. The students at hombu where surrounded by an air of impending doom. They thought “If things go on like this Yoshinkan will become the main branch of Aikido”. It was in the midst of this condition that Gozo Shioda (first Kancho of the Yoshinkan) said “If this goes on Aiki will die” and founded the Yoshinkan.

Q: So Shioda sensei had that much vigor.
A: That’s right. There wasn’t even a formal grading system at the hombu of that time. For that reason, everybody sensed the danger that hombu would become merely Ueshiba Dojo. For myself, I could only do what I was able to, so first I established the first branch organization, the “Jouhoku Branch”.

On June 10th of Showa year 30 (1955), the “Yoshinkan” dojo was established in Tsukudo-Hachiman, Shinjuku. When it opened it was a wonderful 100 tatami facility with a location near Iidabashi station, it was ideal. On the other hand, there were still refugees living in the headquarters of the “Aikikai” hombu dojo, which had not yet been fully repaired.

For many people to imagine that in the future the center of Aikido would become the Yoshinkan was entirely reasonable. This is certainly the way that it looked to people from the outside.

It was possible that the Aikikai would vanish if we could not make the right response.

Kisshomaru Ueshiba hooked up with a collegue from his days at the Osaka Shoji trading company, Shigeo Tokunaga. Before working at Osaka Shoji, Tokunaga was instrumental in publicizing the Japanese baseball Central League in post-war Japan.

Here is Tokunaga’s response after Kisshomaru Ueshiba explained the problem (from “Aikido Ichiro”):

There is a secret veil over Aikido. First, this must be removed before anything can be done. The “modern Tsukuhara Bokuden” (a famous swordsman from the Sengoku period) living in the forests of Iwama must be brought out of Iwama and returned to Tokyo. Then, we must show the crowds the true divine techniques of the real O-Sensei.

Of course, Morihei Ueshiba himself was something of an obstacle to this event. Until that time all demonstrations were performed by Ueshiba alone, with the students only permitted to take ukemi. If Ueshiba was unavailable and someone was sent as a representative the events were generally called “workshops” or “training sessions” (講習会). Further, “demonstrations” (演武会) were something that were only performed in front of a small number of select people – not in front of the crowds of a general audience.

This was not limited to Aikido, this type of attitude was common among the traditional martial arts in Japan.

Fun (but probably irrelevant) fact: Sokaku Takeda was a student of Jikishinkage-ryu under Kenkichi Sakakibara, who was well known for staging the first public exhibitions of swordsmanship in the Meiji era.

And here’s where an important thing happened (from “Aikido Ichiro”):

However, people who saw my father’s demonstrations before the war were known to say, “Morihei Ueshiba’s techniques are certainly the work of a master, but this is a very difficult thing to duplicate – after all, perhaps they will be limited to Morihei Ueshiba himself.”.

Something that could be done only by the Founder Ueshiba Morihei, but could not be done by anybody else, this would not work with the expansion of Aikido for the new age.

For that reason, the demonstration format was re-structured with the help of Shigeo Tokunaga, who was instrumental in organizing and publicizing this event.

In “Aikido Ichiro” Kisshomaru Ueshiba mentions changes such as allowing all of the students to demonstrate, in order to show that Aikido is a thing that anybody can do.

But what other changes crept into the curriculum as a result of “tuning” Aikido for demonstration to the masses?

Yasuo Kobayashi gives a few hints from his interview in “Profiles of the Founder” (開祖の横顔, translated from the Japanese):

Q: Is that so – did that have the freestyle (jiyu-waza) demonstrations so common in Aikido at that time?
A: No, that began after the examination system was established. When the membership began to increase a system of kyu and dan examinations was instituted, and the uchi-deshi would take ukemi. However there were never more than around 5 uchi-deshi, so they could not partner up with the expanding number of students, so the students were made to partner with each other for ukemi. At that time freestyle was added as an item on the examination. We held demonstrations from the time that I started, but since basic techniques alone were thought to be boring it was decided to show kokyu-nage as well. Until that time kokyu-nage was not done often in the dojo.

Q: Why was that?
A: O-Sensei did not like kokyu-nage very much. “What good is simply throwing around people like that?” was his thinking. However it was good for training, so it was added to the normal practice. Aiki-nage was much the same – behind the scenes of how freestyle became introduced these kinds of things happened. While we’re discussing this, as far as I know koshi-nage was not practiced much in the beginning. After Nishio and Kuroiwa researched it independently other instructors began to steal their techniques.

Interestingly, the effect of the influence of demonstrations on the everyday technical curriculum is one of the primary reasons given by Yukiyoshi Sagawa for his refusal to give public demonstrations (translated from “Transparent Power” / 透明な力):

There are kinds of Bujutsu that give many demonstrations, but in order to show their techniques they end up using unnecessary strength. When striking, for example, releasing the power from your shoulder when striking doesn’t make an impressive presentation, so you can’t help but using strength in the end. When you do that it becomes a habit, and when you practice on your own you can’t help but use strength. In the end, schools that give demonstrations always end up getting sucked in by the necessity of putting on a good appearance, and use strength in their techniques.

In the end, Shigeo Tokunaga and Kisshimaru Ueshiba were able to convince Morihei Ueshiba to put aside his objections. Tokunaga never quite believed that the would be able to go ahead with the demonstration to the very end (from “Aikido Ichiro”):

The Founder was like a god emerging from the forests of Iwama, until the very end I didn’t really believe that he would give a public demonstration, much less one on the stage of a department store.

At one point Morihei Ueshiba climbed up on stage long before he was scheduled to appear an declared, “Everyone! From now I will give a demonstration!”, but Kisshomaru managed to pursuade him to step down until his turn came in the program. 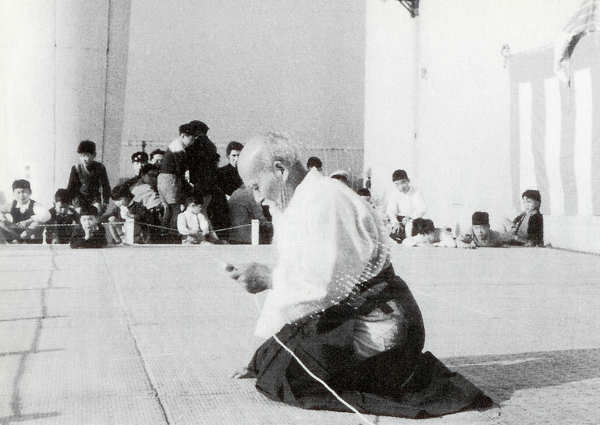 The first public demonstration of Aikido by the Aikikai was was held at the end of September to the beginning of October 1955, a five-day demonstration on the rooftop of the Takashimaya Department Store in Nihonbashi, Tokyo which was the first of its kind after the war.

In May of 1960 the first All Japan Aikido Demonstration was held in the Yamano Hall in Shinjuku, with 150 demonstrators.

2 thoughts on “Lifting the Veil: Aikido Opens to the World”