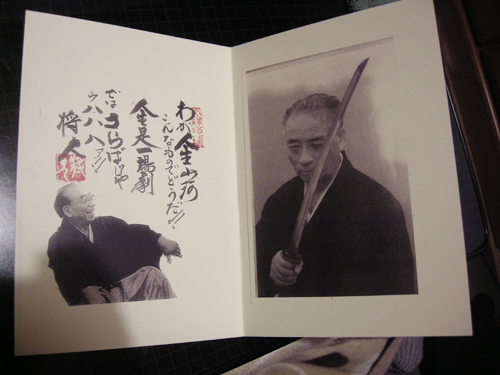 “Aikido is the manifestation of the principles of the universe – connection and the union of opposites.”


“Your belly won’t get full reading a cookbook; you have to eat!”


Aikido movement is a spiral. Not a circle, a spiral.

Masando Sasaki (佐々木の将人), 8th Dan, passed away on February 15th 2013 at the age of 84. Born in Yamagata Prefecture in 1929, he was a graduate in economics and law of Chuo University. Sasaki began aikido in 1954 while employed by the Self-Defense Agency, and was also was a member of the Tempukai and Ichikukai, and a priest of the Yamakage San’in Shinto sect.

This is the third part of a three part English translation of an interview with Masando Sasaki that was published in a collection of interviews with students of the Founder published in Japanese as “Profiles of the Founder” (開祖の横顔) in 2009. You may wish to read Part 1 and Part 2 of the interview before reading this section. 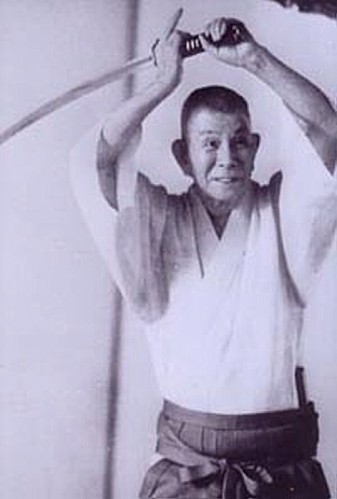 Q: Sensei, was the Founder aware that you were forming that kind of a spy school?

A: I don’t know. If there was a report of a spy it would always be denied. (laughing) It was a secret inside of a secret! It was while I was doing these things that my Sempai died and I began to think “What is the purpose of human life?”. Then, I spent a few months in the mountains, standing under waterfalls, reading books about Buddhism, and I began to think “What is death?”. It was at that kind of a time that I met Nakamura Tempu sensei. It was inspiring. Tempu sensei told me “Practice Budo. Without training in a Budo where you stake your life on a single moment you will never understand the value of living. I know of an interesting Budo. It’s called Aikido.”. When I told him that I was already doing Aikido he said “Train more deeply”. It was for that reason that I began my true training in Aikido. Tempu sensei and O-Sensei never met, but their students went back and forth between them.

Q: What year did you start to carry the Founder’s bags?

A: Rather than carrying bags, it might be better to say that I attended him closely together with the Uchi-deshi, for about six years. It was thanks to that experience that I became intimate with O-Sensei. However, to the very end O-Sensei thought that I was someone from the Ministry of Defense, and not someone from Hombu Dojo. (laughing)

Q: Is that right? (laughing) Do you have a story of being with the Founder that left a particular impression upon you?

A: When I was riding on the train with O-Sensei and gave him a seat he’d become angry and say “You’re treating me like an old man!”, but if you didn’t give him a seat he’d also become angry. He would be the most cheerful when riding on a crowded train and he made some young punk with shifty eyes stand up while he sat down. (laughing)

Q: (laughing) I have heard stories of many unusual episodes, but that one is really surprising!

A: O-Sensei could be mischievous! At the demonstration at the Hibiya Kokkaido when I stepped on O-Sensei’s belt and the threads came apart he shouted “Hey, my wife will yell at me!” and the hall exploded in laughter. (laughing)

Q: It may have something to do with your personality as well. Conversely, what amazed you?

A: That was all the time! One thing was the “bullet dodging” incident. I didn’t see this myself, but I heard it directly from him many times. However, he would say “My grand-children take my glasses. Even though I can dodge bullets I can’t dodge my grand-children!”. An adult has an intent to shoot, don’t they? So, that intent to shoot becomes a white sphere that flies towards you first. He would say that the actual bullet would follow after that, so it was possible to dodge. But he would say “My grand-children are doing this unconsciously, so I cannot dodge”. Anyway, that’s the theory, but I have to think about whether it’s actually true or not. (laughing)

Q: Are there any episodes that you experienced firsthand that left an impression on you?

A: You must be talking about Hiroshi Arakawa, the pro-baseball player. When Arakawa came to the dojo and I introduced him, “Sensei, this is Arakawa-sensei, who is famous in baseball”, O-Sensei asked, “Is that the one that you light on fire?”. So I said, “Sensei, that’s O-Kyu” (Note: “moxibustion, as opposed to “yakyu”, which is “baseball”). Since O-Sensei did not know what baseball was, I explained, “You hold a stick (bat) and hit the balls that are thrown to you”. O-Sensei replied, “For something like that why don’t you just cut through with a Japanese sword?” – O-Sensei didn’t quite get the point (laughing).

A: Is that right? (laughing) Finally, Arakawa eyed the bokken held by O-Sensei and swung at it from the side. At that moment O-Sensei filled himself with Ki and Arakawa and the bat were sent flying. Arakawa was certainly sent flying at least twice, and then he applied to become a student.

A: We tried to do the same thing ourselves. We thought that we would try to twist the bokken at the moment that the bat hit it, but we couldn’t do it.

Q: Is it that it’s not just a problem of technique?

A: When speaking of technique, O-Sensei’s method of teaching was extremely simple. He wouldn’t teach anything except Ikkyo, Irimi-nage and Shiho-nage. In the old Dojo he would close a black curtain so that people couldn’t see in and give special lessons to company presidents. In today’s currency that would cost around 200,000 yen. It was really expensive.

Q: Was he teaching them some kind of secret techniques?

A: I was with him so I was able to observe, he’d only do the same Ikkyo, Irimi-nage and Shiho-nage that I talked about before. Later, when I asked “Is that okay?” he said “Idiot, those are the secrets!”. I think that it was just that he’d take more money from those who had more, and less from those who had less. 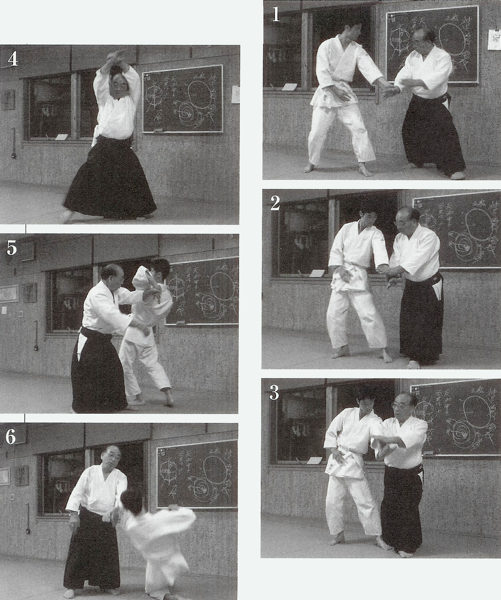 
Q: Sensei, what are you yourself thinking when you teach Aikido?

A: I think that Aikido movement is a spiral. Not a circle, a spiral. For that reason it can become small, or large without limit. Rather than technique, it’s necessary to match your mind, your breathing and your body to each other. If you teach Aikido through technique then when it comes to an actual fight you will get get hit. What you can express instantly, throwing with Ikkyo, or with Shiho-nage, or entering with Irimi, using your entire body, this is all that there is. Again, for that reason, these can be said to be the secrets of Aikido. I believe that the foundation of that is the spiral. That, and throwing beautifully with the connection between In and Yo. The movement of Aikido is all In and Yo. I am not speaking of this in a theoretical sense! This in and of itself is the principle of the universe.

Q: Certainly you can see the connection of In and Yo in Aikido movement – fighting without fighting, conflicting without conflicting, throwing and receiving.

Q: Did the Founder speak to you about this concept?

A: O-Sensei spoke of many things. However, there are things that I didn’t understand at that time I can understand now. Whatever happens in life, however strong you are in the Dojo, some day there will be an incident where you become upset and are unable to do anything. Budo, Zen, the Way of Tea, are all for the purpose of developing the Immovable Mind (不動心 / “fudoshin”).

A: I said to myself “If you’re surprised it’s already too late” and implanted it in my subconscious for even the smallest matter, so that when major incidents occurred I was able to handle them calmly. The goal of human beings is craftsmanship, the purpose of life is to improve your character. Aiki-jutsu is to condition the body strongly and vibrantly, building people that will be of positive assistance to the world of human beings. Also, Aikido is for improving your character, without the competitions of the old Bujutsu. O-Sensei would scold people strongly for kicking, calling it “dirty”. I believe that the culture of Japan is beauty, without good and evil.

Q: Thank you very much for taking the time to speak with us today. 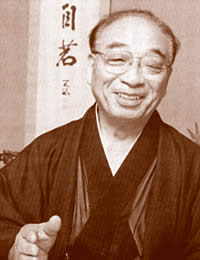