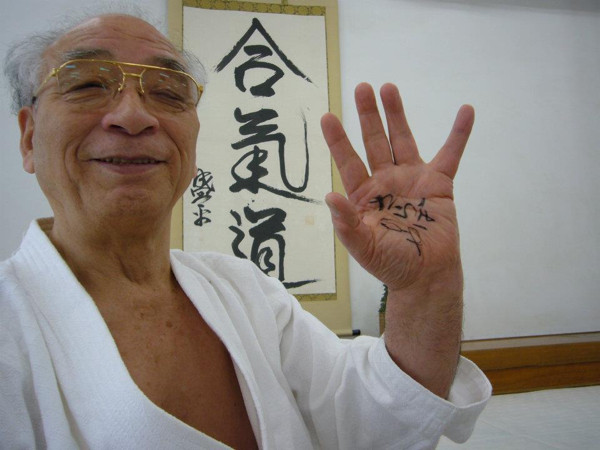 Falling in love with O-Sensei’s face

Born in 1929, he began training with Morihei Ueshiba in 1954. He could be outspoken and controversial, but almost always entertaining.

He was a graduate in economics and law from Chuo University, and published a dozen or more books in Japanese. He gave lectures throughout Japan on his particular method of viewing the human condition (佐々木説法). 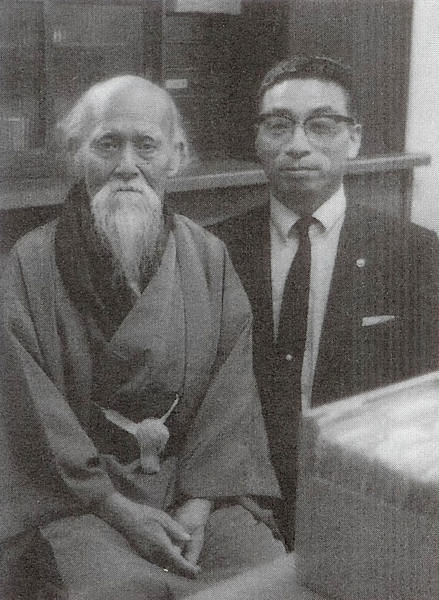 “Falling in love with an amazing face” – Meeting the Founder

Sasaki: In my life until now, the age of 77, I have had many encounters, but if I could sum up meeting O-Sensei in one sentence I would say that I fell in love with his face, his face.

Q: At what age did you meet Ueshiba Kaiso?

A: It was Showa year 29 (1954), so I was 26 years old. At that time I saw an Aikido demonstration at the Ministry of Defence . At that time we called the Ministry of Defence (防衛庁) the National Security Force (保安隊). “What’s Aikido?” I thought as I watched, it seemed like a dance. However, I went up when one of the instructors demonstrating called me over, and he slammed me right down. When I think about it now, that was Kote-gaeshi. I thought “How was I thrown?” “I don’t understand…”. Then when I heard that there was no competition in Aikido I thought “No competition? That’s ridiculous!”. With some of those questions in mind I went to Hombu Dojo. O-Sensei was there. That was our first encounter. I remember feeling “What an amazing face”. I fell in love with that style of an ancient warrior and the appearance of a mountain hermit.

Q: So you began Aikido for three reasons – you were thrown, there were no competitions, and the Founder’s mountain hermit-like face?

A: Yes, yes. When living with O-Sensei you become aware of many spiritual things.

Q: Did you become an uchi-deshi right away?

A: I lived outside the dojo, but I carried O-Sensei’s bags, and travelled with him. That’s because I dealt with everything related to shrines. 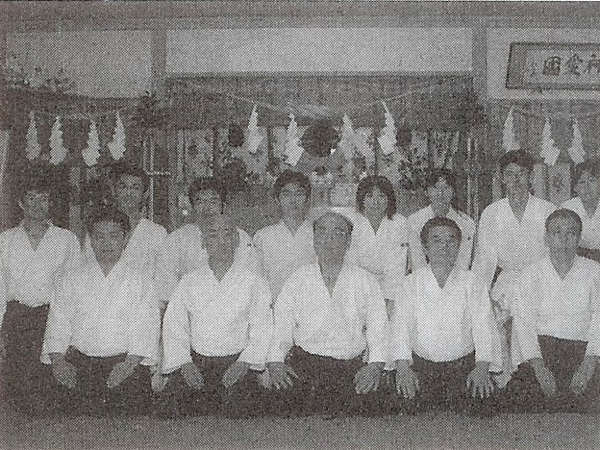 Q: Sensei, you are a Shinto priest now, but were you also a priest at that time? (Sasaki Shihan also serves as the chief priest of Yamakage Shinto Kami-fukuoka Saigu / 山蔭神道上福岡斎宮宮司).

A: No, I wasn’t doing that then. It was a long time after that, that I became the chief priest.

Q: Then why was it that the Founder took you with him around the shrines?

A: That’s a mystery. I don’t understand why it was so, but when he went on shrine pilgrimages he would always take me with him.

Q: Did you have a liking for Budo previously?

A: I didn’t do anything that you would really call “Budo”. During the war I was taught Sumo, Juken (bayonet) and Kendo along with everybody else, but I never did any serious Budo. Just Aikido.

Q: Why do you think that you chose Aikido?

Q: You mean that a person’s spirit shows on their face.

A: Of course. There are those who say that humanity is in the spirit, not the face, but since the face changes according to the spirit the skin is not just skin. Because just with a glance you know “Ahh, this face has this kind of a spirit”. In that sense I fell in love with O-Sensei’s face. Isn’t it the face of a mountain hermit?

Q: How old was the Founder at that time?

A: I think that he was around seventy years old.

Q: Were you immediately struck by his face the first time that you met him?

A: Just take a look at a picture of O-Sensei! You must think that it’s amazing.

Q: To be honest, I have the impression of someone disconnected from reality.

A: You see? He’s a Kami-sama (a god). One day when I was in the Dojo O-Sensei said “Right now I see a person in Shinjuku Station who has come to visit Hombu Dojo. They’ll be at the Dojo in ten or fifteen minutes”. We were doubtful, but a person like that actually came.

Q: Do you understand what happened?

A: Yes, I do, he was psychic. At other times he read people’s hearts, and fought and repressed evil spirits. 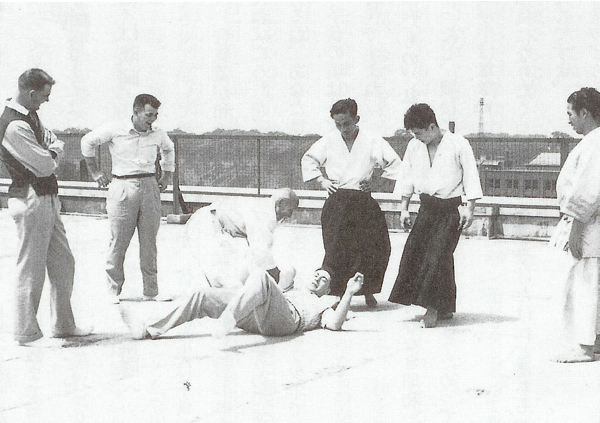 On the rooftop of the former Ministry of Defence
From right: Masando Sasaki, Nobuyoshi Tamura, Kisshomaru Ueshiba, O-Sensei

Q: There are a lot of anecdotes about the Founder. He was said to have spiritual or psychic powers. The episodes of the Founder that we’ve all heard have become legendary, but what was it really like?

A: It’s all true. Because human beings are the children of the gods, through Shugyo you can reach that point. Nakamura Tempu Sensei was also that way. He could tell me how much money I had in my wallet, right down to the number of bills and coins. That person could predict who was going to die, and when. He would never tell the person themselves, though.

Your lectures come from a sales pitch!? The mystery of the Police Reserve Corps.

Q: Sasaki Sensei, it occurred to me while conducting this interview, but weren’t you pretty mischievous as a child? When you heard about Aikido as the “Budo of harmony”, or that competitions were not allowed, I would think that you are the type who would have a reaction like “You’ll never know unless you try it!”.

A: You understand me very well, are you psychic? (laughing) When I was in the later years of elementary school I wasn’t misbehaved, I liked airplanes. (*there’s a pun here that doesn’t translate) For that reason, from the time that I was a child I wanted to become a member of the Special Attack Units (*特攻隊 – the forces used for suicide missions such as the kamikaze dive-bombers).

Q: Incidentally, during the war what about the army….?

A: I wanted to become a member of the Special Attack Units, so I tested for the Younen Gakko (幼年学校 – a high school for training army officers), but I didn’t make it. In the end, I was drafted and sent to Nagoya.