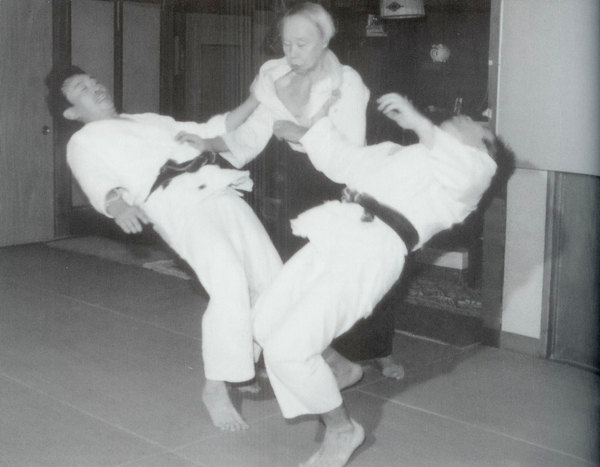 He has also published a number of books and articles researching the Japanese martial arts and Daito-ryu.

This article is an excerpt on breath training in Daito-ryu from Takahashi’s book “The Truth of Daito-ryu Aiki” (大東流合気の真実), which was published in Japanese by Fukushodo Co. Ltd. in September 2007.

The characters 調息 (“Chousoku” / “Regulating the Breath”) are used to refer to the method taught in Sagawa Dojo – the same characters used in Chinese to refer to “Tiao Xi”, Chinese Daoist breathing methods.

Daito-ryu scroll given to Masaru Takahashi by Yukiyoshi Sagawa
in Showa year 48 (1973)
First item on the right:
“Method of Forging the Spirit and Cultivating Ki in the Tanden
by Regulating the Breath”
(調息丹田修気鍛胆法)


Method of Training and Regulating the Breath (調息修法)

In the past, the formal certificate given for Sho-Dan in Sagawa-den Daito-ryu was folded, but several years after I started that had changed to a rolled certificate and there were no more folded certificates.

Folded certificates were given out for those who had trained up to the Ichi-gen level of teachings, on the Mokuroku (*a scroll or certificate listing a “catalog” of techniques) listing the names of each technical and body method. The first item on that Mokuroku was “Method of Forging the Spirit and Cultivating Ki in the Tanden by Regulating the Breath” (調息丹田修気鍛胆法), which we called “Regulating the Breath” (“Chousoku” / 調息) for short. “Regulating the Breath” is one type of Kokyu-ho (“method of breathing”). In “Transparent Power” (透明な力) Sagawa sensei said, “In the past I tried all kinds of things. However, in the end, I understood that methods of Regulating the Breath aren’t useful. That is, of course there are a lot of good points to be found in holding your breath and doing these various things, but in the end this is an artificial method and will result in a delay in your movement. Something somewhere becomes unnatural. You must attain nature (spontaneity) through Bujutsu.”.

If you interpret this explanation directly then you are left with “training in regulating the breath isn’t useful, it’s unnecessary”, but this is something that Sensei was able to say because he had researched and trained in Kokyu-ho. Those who have never trained in Kokyu-ho must not jump to the premature conclusion that “regulating the breath isn’t useful”.

Sensei would embrace anything with enthusiasm if he decided that it had martial benefits. Kiai-jutsu (気合術) and Saimin-jutsu (“hypnotism” / 催眠術) are good examples of this. Kiai-jutsu was included in the curriculum on a teaching certificate (5th Dan) issued in the mid 1940’s – “Oral Transmission of the Secrets of Contests of Physical Techniques, Adaptations to Variations in Sword Techniques and Explanation of Kiai-jutsu” (体の術勝負の秘事口伝授、太刀の術即応変転、気合術の解説) and “Explanation of Kiai-jutsu” (気合術の解説). 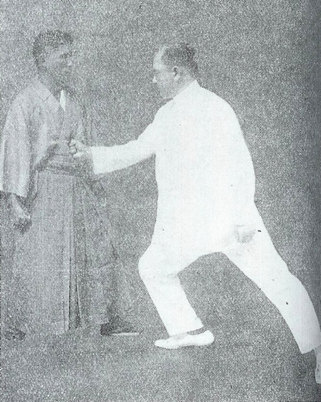 Strangely, at times in the past Sagawa sensei would allow the students to thrust their fists into the pressure point (“kyūsho” / 急所) on the abdomen called the solar-plexus (“suigetsu” / 水月) with all of their strength. This may have been linked to Kiai-jutsu. In various schools of Kiai-jutsu that were popular from the end of the Meiji era techniques called “Suigetsu Ukemi-jutsu” (水月受身術) were taught for resisting a thrust to the “solar-plexus” vital point on the abdomen without experiencing pain.

With regards to research into hypnotism, I heard Sagawa Sensei say, “I got to the point of being capable of instant hypnosis, but it’s not as if it can be applied to anybody, and for instant hypnosis to work some preparation is necessary. Since it cannot be applied to a sudden attack I gave it up.”. Also, the first several types of breath conditioning methods were taught together with Aiki Kenpo (合気拳法).

Regulating the Breath is used to form the foundation of Kiai-jutsu and hypnotism. Stated simply, conscious modification of the breath striving for long, deep breaths.

Through the deep breathing of Regulating the Breath it is possible to fully contract and expand, not only the lungs, but also the muscles of the lower abdomen and the hips. Additionally, since the functions of the heart and lungs are improved, bringing circulation the the extremities of the body, it is also effective in preventing aging of the circulatory system. Also, since the muscles of the abdominal cavity beneath the diaphragm experience significant movement, benefits to the digestive system are realized through massage of the viscera and the internal organs become conditioned.

When you become correctly trained in Regulating the Breath your abdominal muscles will become strong like Sagawa sensei’s, and even if you receive a strong thrust to the solar-plexus you will be able to accept it with a cool expression. However, Sensei was not satisfied with this level of training.

I was blessed with the opportunity to touch Sensei’s abdominal region while speaking to him on two occasions. Surprisingly, Sensei was able to maintain the tension and compression in his abdominal muscles even though he was conversing as usual and breathing normally.

At the level of Regulating the Breath, when inhaling be conscious of dropping the air down to the Seika Tanden (臍下丹田). By doing this the abdominal muscles will experience significant movement, and become harder. When it is time to exhale, because you are expelling the inhalation the abdominal muscles contract and become softer. Normally, you repeat this sequence. 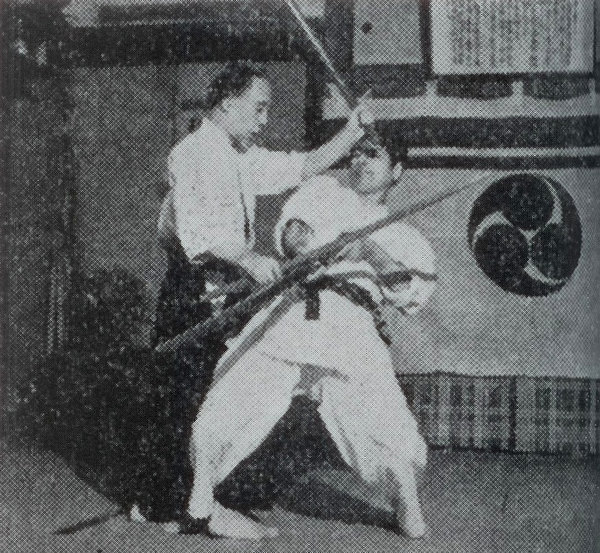 Yukiyoshi Sagawa demonstrates two-sword technique
(from “Hiden Nihon Jujutsu” / 秘伝日本柔術)
Note the mitsu-domoe on the curtain in the background.
Above the curtain is the scroll pictured in
“Aiki Budo is the Way of Human Development“

Incidentally, Sagawa sensei was able to keep his abdominal muscles under constant tension, whether he was inhaling or exhaling. Even though his abdominal muscles were always under tension, there was no stagnation in his conversation, and his his entire body was relaxed and felt like it was without any stiffness.

Incidentally, I mentioned before that training in Daito-ryu is not accompanied by vocalization. Through vocalization “spirit”, “Ki” and “power” are coordinated and matched, the tension in the nerves that attempt to control the body’s power is released, and concentrated power (集中力) can be created. The absence of vocalization in Daito-ryu is one reason that it takes so much time for beginners to understand how to generate power.

In Sagawa-den, the “Ya”, “To”, “Ei” used in the training of a separate tradition of kenjutsu (Kogen Itto-ryu / 甲源一刀流) are taught. During vocalization momentary breathing becomes necessary. If you accumulate sufficient training in vocalization during Kogen Itto-ryu practice then you will be able to learn the trick of momentary breathing while in motion. As a result, the abdominal muscles will be strengthened, which is a shortcut to matching “spirit”, “Ki” and “power”.