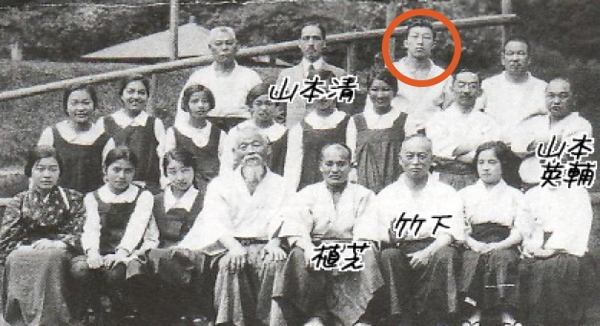 Kenji Tomiki (富木謙治) began training under Aikido Founder Morihei Ueshiba in Daito-ryu Aiki-jujutsu in 1926.  He was largely responsible for the compilation and editing of the text in Morihei Ueshiba’s 1933 training manual “Budo Renshu”  (published in English under the name “Budo Training in Aikido“), and was later appointed to be Morihei Ueshiba’s representative at Kenkoku University in Japanese occupied Manchuria.

At the time that he started training with Morihei Ueshiba he was already a student of Judo – an uchi-deshi (“live-in student”) to Judo Founder Jigoro Kano. He was encouraged to visit Ueshiba by a fellow Judo student at Waseda, Hidetaro Kubota (who later changed his name to Nishimura), who had trained with Morihei Ueshiba in Ayabe during the 1920’s.

Daido Gakuin (大同学院) in Manchuria prior to 1945

In 1936 Tomiki left Tokyo to become a part time instructor at Daido Gakuin in Japanese occupied Manchuria. Before he left he went to pay his respects to Jigoro Kano, and was told:

This was Kenji Tomiki’s conundrum after the war, just as it was a conundrum for JIgoro Kano, and even Kisshomaru Ueshiba – namely, how the older arts could and should be modified for popularization among the general public (there’s a little about the changes in post-war modern Aikikai Aikido in “The Ueshiba Legacy, by Mark Murray“) . 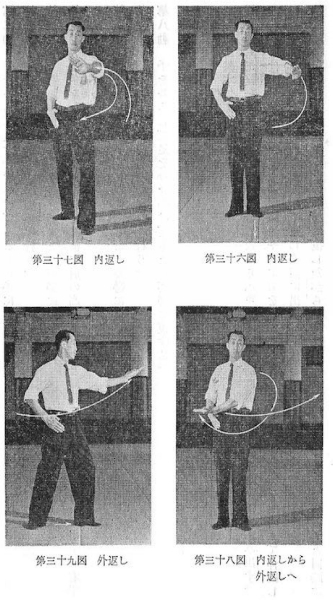 In 1954 Tomiki published a book called “Judo Taiso” (“Judo Exercises” – the book is available for free download from the article “Kenji Tomiki: Judo Taiso – a method of training Aiki no Jutsu through Judo principles“). This book represents some of Tomiki’s earlier work at integrating the work of his two teachers and then presenting the results to the general public.

“Judo Taiso” (mentioned above), the texts that will be available for download below, and the rest of the content on this site are provided free of charge as a service to the community. You can help support this project by contributing a little bit to help support our efforts. Every donation (even $1) is greatly appreciated and helps to cover our server and bandwidth costs, and the time involved. The more support that we get the more interesting new content we can get out there!

When Keizou Yamamoto (山本敬三) went to train with Kenji Tomiki at Waseda University in 1957 he encountered that book:

Although I had gone to Waseda University with the intention of learning Aikido, we were given a booklet called “Judo Taiso”, and we did the Judo exercises that Sensei had invented. I understood at last, years later, that Sensei had deeply respected the late Jigoro Kano Sensei – “The way that I see Aikido is through Judo”, he said. In the forward to that book that Tomiki Sensei wrote was the following:

“I was introduced to Kodokan Judo some forty-five years ago, when I was in elementary school. Leading to the present day I have received instruction beginning with the late Jigoro Kano Sensei, and then through many Sempai. From around thirty years ago I was taught Aikido by Morihei Ueshiba Sensei. “Judo Taiso” was born through the comprehensive study of both of these people, with the structure based on Aikido technique. The movement of the body has been transformed to modern gymnastics and with this the unification of power developed through the “Principles of Judo” and the management of the body can be practiced.”

Tomiki further discussed some of the issues surrounding this problem in this interview with Aikido Journal, in which he was asked about some of the spectacular feats that Morihei Ueshiba was able to perform with his internal skills:

This problem is one of modern physical education’s muscle training. It’s called isometrics. That is to say, by pushing or pulling you train either the outer muscles or the inner muscles. When you get perfect at this form of training you can hardly see any muscle movement at all during the exercise. When you can’t see any movement you are using the muscle very skillfully. But, in the educational field if you demand a similar level of perfection then you are making a big mistake. If anyone trains sufficiently it is possible to do it to some degree, but, of course, there are limits what a human being can do. Perfection is a problem of belief. Can we call it religious faith? If we have to disrupt our partner’s psychological state through some hypnotic technique it would not be a matter of religion as we usually think of the word. I for one, take the normal point of view that education appropriate for the general public is correct and I think aikido should be something usual, or normal, as well.

Tomiki wasn’t alone in these sentiments, his teacher Jigoro Kano also wrestled with the problem of balancing his desire to preserve the traditional arts of Japan with the his desire to create an art that would be suitable for the modern educational system and the general public:

The pioneer who modernized the feudal era schools of bujutsu and brought them to into the context of modern physical education was Master Jigoro Kano, the founder of Judo. When I say that he modernized ancient bujutsu, what I mean is that, first of all, he categorized and arranged the techniques so that they transcended schools. The main feature of this rearrangement was organizing and categorizing the major techniques according to the form of combat, so as to make tournaments (shiai) possible.
– “On Jujutsu and its Modernization” by Kenji Tomiki

And Kano dealt with similar issues as well – according to Takamura-ha Shindo Yoshin-ryu (新道楊心流)  Menkyo Kaiden Toby Threadgill, there was a point in time when the entire Internal Power (内力の業) training syllabus of Shindo Yoshin-ryu was included in Kodokan Judo textbooks – a chapter that was removed from later editions. Here he speaks a little bit about that section of the training:

They are solo exercises that inculcate the proper balance, movement and muscular application utilized in our greater curriculum. These types of exercises are actually quite ubiquitous in Japanese jujutsu schools of the Edo Period, although they are rather unfamiliar to those outside the membership of specific Nihon koryu. According to Yoshin ryu lore, this form of body training was introduced to Japan from China in the mid-Edo Period. In the case of Yoshin ryu, the Nairiki no Gyo were specifically created adaptations of Chinese practices intended to augment the study and application of specific body skills required in Yoshin ryu’s greater curriculum.
– From “An Interview With: Toby Threadgill, Menkyo Kaiden, Takamura ha Shindo Yoshin ryu“

In the end, Tomiki opted to follow Jigoro Kano’s thinking and introduce a form of competitive Aikido:

I introduced Randori Aikido so that students could make their techniques more effective by ‘free play’. These techniques originate from Kata and can develop through Randori to competition. In order to teach the spirit of Budo in a modern educational system, it is necessary to introduce it as a sport. The reason I developed Randori Aikido from Kata Aikido is because I wished to follow the method and thinking of Dr. Jigaro Kano in which he evolved Judo from old style Jujutsu

That would lead to his eventual break with the Aikikai and the Ueshiba family over the issue of competition in Aikido. Morehei Ueshiba’s granson Moriteru Ueshiba even went so far as to say that Aikido with competition can no longer be considered “Aikido”:

For example, those that have instituted competitive matches have obviously forgotten the true nature of Aikido, and cannot be called Aikido.
– From “Aikido ™ – Can it really be trademarked?“

Nonetheless, Tomiki was still in Morihei Ueshiba’s thoughts in his last moments, as we see here in this recollection from Yoshinkan Aikido Founder Gozo Shioda:

Four of the younger deshi were staying with Sensei. He was asleep when I went there, but he suddenly woke up and said, “It’s you, thanks for coming. I’m riding on a winged horse around the heavens. I can see the earth. Shioda, what is [Kenji] Tomiki doing now? I’m watching.”

At that time Kisshomaru had changed his name and was called Koetsu. He was waiting at the foot of the bed and Ueshiba Sensei said the following, “Shioda, I want you to support Koetsu on the technical side. I want you always to cooperate with him. I’m counting on you.” Kisshomaru stood there and listened.
– From Aiki News issue 93 (now Aikido Journal)

So…now we have a couple of downloadable documents in PDF format (provided from scans originating with Eddy Wolput and the Study Group Tomiki Aikido). 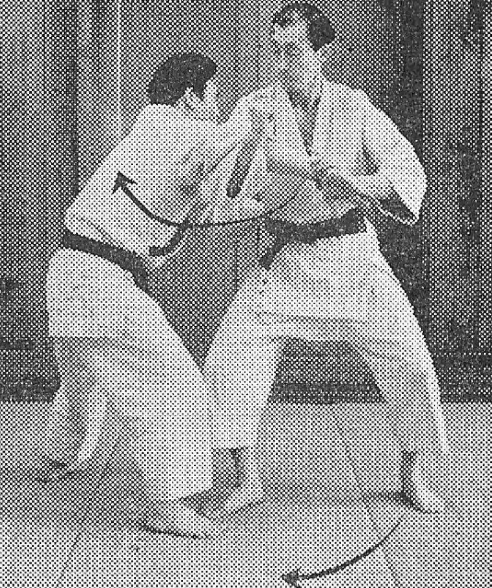 Kenji Tomiki shows a technique from the Goshinjutsu no Kata

The Kodokan Goshinjutsu no Kata is a set of pre-arranged forms, set techniques, intended to focus on self-defense applications. Created by a Kodokan committee over a period of some three years, Kenji Tomiki had a huge influence on the final form of the Kata.

In the introduction to the Kodokan book “Goshinjutsu”, Risei Kano (嘉納 履正), Jigoro Kano’s son and the second president of the International Judo Federation, wrote:

The writer of this Book, Professor Kenji Tomiki, has deep understanding of Judo as Professor of Waseda University and also is an authority on the research of Aiki-Jutsu in the light of Judo principles. In formulating the Goshin Jutsu no Kata, he played a leading role in the panel.

Kenji Tomiki and Tadao Otaki gave the first public demonstration of the Goshin Jutsu no Kata at the Kagami Biraki in 1956 at the Nippon Budokan. 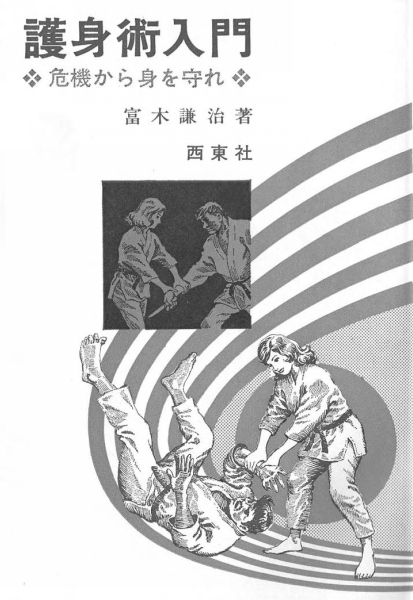 “Introduction to Goshinjutsu” by Kenji Tomiki, 1974

Next is Kenji Tomiki’s “Introduction to Goshinjutsu” (護身術入門), published in 1974. This book is an interesting follow-up to the “Kenji Tomiki: Judo Taiso – a method of training Aiki no Jutsu through Judo principles” publication mentioned above.

It is also clearly aimed at the general public, although there are also some interesting sections. 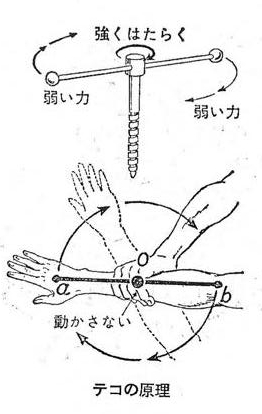 For example, here is one about the “Principle of the Lever”. Here Tomiki talks about Yin/Yang (In/Yo) opposing forces with a central non-moving pivot in the text, but in terms of modern mechanics as a force couple. According to Wikipedia this is defined:

A couple is a pair of forces, equal in magnitude, oppositely directed, and displaced by perpendicular distance or moment.

Its effect is to create rotation without translation, or more generally without any acceleration of the centre of mass.

The above ought to be familiar material to those folks training in the Sangenkai method.

Also, here is one demonstration using a spinning top to illustrate the stability and power of spiral force: 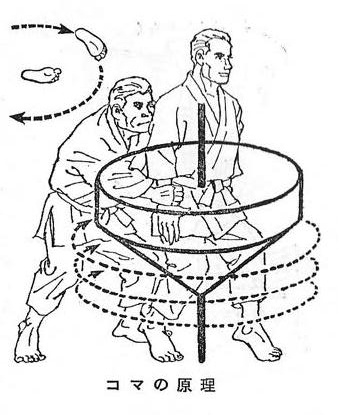 The principle of the spinning  top 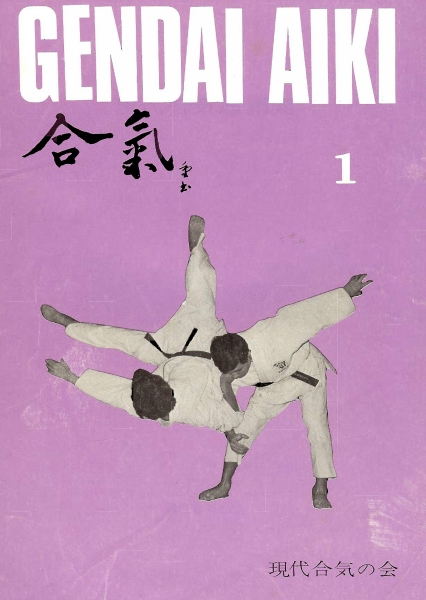 As a final bonus, the six volume “Gendai Aiki” series of books below is a 1970’s correspondence course in Aikido – the type of course one often sees advertised in the back of Manga and other popular magazines. The series was not authored by Kenji Tomiki, but was clearly written by someone who had experience with the Tomiki system of Aikido. I hope that you find these interesting as well.