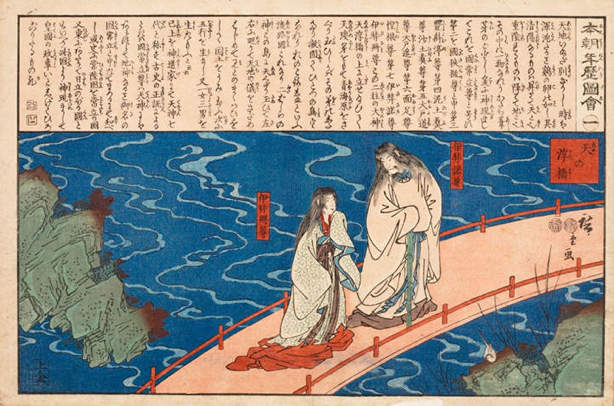 The Gods Izanagi and Izanami on the Floating Bridge of Heaven
from the series “An Illustrated History of Japan” by Utagawa Hiroshige, circa 1847-1852
Honolulu Academy of Arts

Izanagi and Izanami on the Bridge Connecting Heaven and Earth

The “Floating Bridge of Heaven” (“Ame no Uki Hashi”) is an important part of the Japanese creation myth.

According to the Kojiki (“A Record of Ancient Affairs”), the first gods summoned two divine beings into existence – the male essence Izanagi (“The Male who Invites” / 伊邪那岐) and the female essence Izanami (“The Female who Invites” / 伊邪那美命). These two beings were given the task of creating the first land masses on earth. Taking the jeweled spear they were given, the two divine beings stood on the Floating Bridge of Heaven and stirred the sea with the jeweled spear, creating a vortex. Drops of salty water falling from the spear formed the first island, whereupon the divine beings descended from the Bridge to the earth below.

There’s a lot more (the Kojiki is a great tale, one of the world’s first soap operas), but for now let’s get back to how this relates to…Aikido.

It is said that Aikido is “Standing on the Floating Bridge of Heaven”.

This is one of those beautiful poetic phrases by the Founder that people tend to love – and then to forget a few minutes later, never having wondered whether O-Sensei was implicitly (or even explicitly) pointing towards some of the most important principles of his art (Aikido, maybe you’ve heard of it?).

Is it important? Maybe not – understanding the principles behind whatever you’re doing, be it ballet or baseball, is not necessarily going to make you better at performing that activity. On the other hand, understanding the underlying principles can help you to work out what’s going wrong, and work towards what goes right. It also opens up entire new realms of possibilities.

If you’re an Aikido student it seems a no brainer to me that you ought to be interested in what the Founder of the art had to say. More than that, I think that all Aikido students really have a responsibility to try to understand and to study those things as best they can.

If you’re not an Aikido student – well, I study plenty of things written by non-Aikido folks who do interesting things that I’d like to know more about, and even if I don’t always get what they’re talking about at the very least it helps me to know what I don’t know. Believe me, if someone like Chen Xiaowang is standing around giving out information I’m going to at least take a look.

Back to Morihei Ueshiba – here’s even more emphatic about the importance of the Floating Bridge:

That sounds pretty definite – no Floating Bridge, no Aiki. Another no brainer – no Aiki, no Aikido.

So what’s “Aiki”? In the last blog post, “Aikido without peace or harmony“, we tried for a working technical translation of the term “Aiki” and “Take Musu Aiki”, and what we ended up with was:

“Fitting together opposing forces with Ki and training the attractive forces that are thereby created.”

Let’s see how this works with the Floating Bridge.

We know from the above quotation that Morihei Ueshiba stated that the Floating Bridge of Heaven is a necessary requirement for Aiki to be created. Further, we can see this made clear when the Founder says:

The Floating Bridge of Heaven is the origin of the foundation for the Take Musu Aiki of Heaven.

Now it’s becoming clearer (I hope) – standing on the Floating Bridge of Heaven is a necessary requirement for Aikido because if forms the foundation for Take Musu Aiki (“Fitting together opposing forces with Ki and training the attractive forces that are thereby created.”, as above). Let’s take a look at how the Bridge is constructed:

Getting closer – “Fire” and “Water” represent opposing “In” and “Yo” forces. In “Aikido without peace or harmony” we saw the importance of opposing forces that are fit together or connected with Ki. In fact, the Founder stated that “Take Musu” is the training of the “Inryoku” (“Attractive Force”) created when opposing forces are connected by Ki.

Now we can see that the Floating Bridge of Heaven, since it is constructed of connected opposing forces, can indeed be said to be the foundation for “Take Musu Aiki”.

If you remember, this quote from “Aikido without peace or harmony” also talked about joining opposing forces:

Above the sound “A” and below the sound “O” – opposites connected with Ki, there Attractive Force (“Inryoku”) is created.

Now we can take a closer look at the vowel sounds, and how Morihei Ueshiba used them as a mnemonic device.

The “Floating Bridge of Heaven” (天の浮橋) is “AME-NO-U-UKI-HASHI” and contains all the base vowels “A I U E O” (you may have heard these vowels chanted in Misogi exercises). The vowels are a mnemonic for a description of the process by which the Floating Bridge connects Heaven and Earth:

A: 天（ア） 高天原    TA･KA･A･MA･HA･RA
“The High Plain of Heaven” is itself another mnemonic, we’ll examine that another time.

O: 地（オ） 淤能碁呂島 O･NO･KO･RO
“Earth”, literally “Onokoro Island”, the original island of Japan, formed by the gods who stood on the floating bridge.

And there you have it – a pretty neat description of the Floating Bridge itself. Coincidentally (or maybe not), it’s also a good description of the Chinese training methodology embodied in Heaven-Earth-Man that we discussed in “Aikido without peace or harmony“. 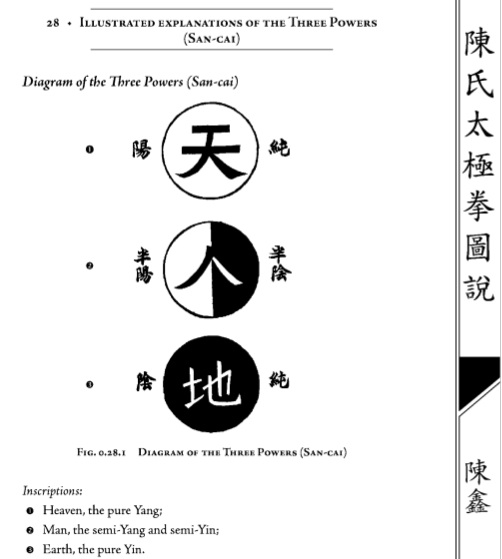 Comparing the two, you can see that the Floating Bridge and Heaven-Earth-Man are, in fact, discussing the same training methodology.

The above sequence of vowels describes the concept of the physical methodology of the Floating Bridge (a.k.a. “Heaven-Earth-Man”). These vowels were often rearranged by Morihei Ueshiba to represent different concepts. For example, the vowels were sometimes reordered to express the progression of spiritual training and development. I may go into that more at a future date, I mention it now to avoid confusion.

Don’t feel bad if you haven’t figured this out before – not everybody understood what was going on when Ueshiba started chanting vowels as mnemonic phrases to embed additional layers of meaning – here’s what Koichi Tohei had to say:

I studied Aikido from Morihei Ueshiba, here again doing everything first and questioning later. Ueshiba Sensei was a master of Ki, as well as the founder of Aikido. However he was also a devoted follower of the Omotokyo Religion, and this influenced the way he taught Aikido. Often it was impossible to make any sense of his esoteric explanations. I rigorously trained in all of the exercises he had us do, though many came from the Omotokyo Religion, and made no sense to us. For example, we were expected to recite the alphabet in a different order. Rather than saying the vowels of Japanese as ”AIUEO” we were made to repeat them over and over as ”AOUEI,” as if this new sequence had a deeper meaning.

Moving along, we see that these opposing forces, joined by Ki, feed into each other in continuous spirals. We also see Ueshiba bring up “iki”, which is also very important, but which we will discuss at a future date. For now, remember these spirals from “Morihei Ueshiba, Budo and Kamae“? 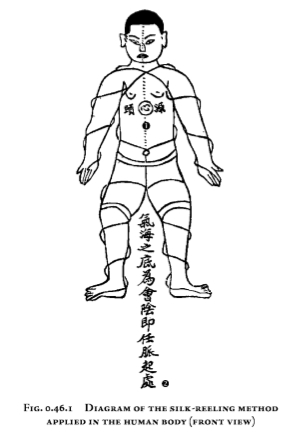 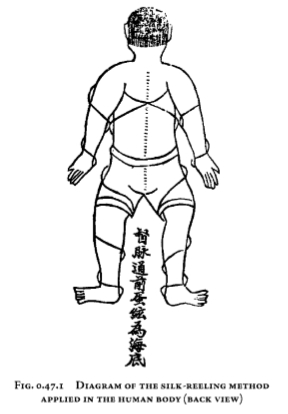 Above, the same process that Morihei Ueshiba talked about with the Floating Bridge is described in Chen Taiji, the positive and negative (flow and counter-flow of shun and ni) spirals winding through the body.

The left hand is Izanagi, the right is Izanami, in the center is Ame-no-minakanushi, this is yourself. This is standing on the Floating Bridge of Heaven and turning in a spiral. This is called Taka-ama-hara. Heaven and earth are one unit, water and fire are also one unit, all appears through Iki (breath). This is the endless appearance of the Kami. Aiki technique comes forth endlessly.

Izanagai and Izanami, the two gods who stood on the Floating Bridge of Heaven and created the world, represent In and Yo, as in this very similar Doka by Morihei Ueshiba:

Manifest yo (yang) in the right hand, change the left hand to in (yin) and guide the opponent.

Ame-no-minakanushi was the first deity to appear in heaven – in other words, the “Boss” who stands in the center.

Ueshiba says that you yourself are the “Boss” – as in 我即宇宙・宇宙即我 ” I am the Universe, the Universe is me.”. This is a very simple, but very important and powerful point. It is also another of those beautiful poetic phrases by the Founder that people tend to love – without considering that it may also be one of the most important technical instructions that he ever gave.

The “Boss” stands on the Floating Bridge uniting the opposing In-Yo forces and moves in a spiral. Interestingly, the movement of the two gods Izanagi and Izanami as they mated is often represented as a spiral – additionally, when Izanagi stirred the seas with the jeweled spear to create the first land a vortex (spiral) was created.

This state, says the Founder, standing on the Floating Bridge uniting the opposing In-Yo forces and moving in a spiral, is Taka-ama-hara – Heaven, so to speak. As noted in “Aikido and the Structure of the Universe“, this is a state that, according to the Founder, exists within yourself – in other words, Aiki is a state created within your own body and mind.

This is very different from a situation in which Aiki is defined by matching yourself to some external condition, such as your partner or opponent. Again, this reinforces the point made earlier – you yourself are the “Boss”.

So to sum up – the Floating Bridge of Heaven, also known as Heaven-Earth-Man, consists of creating a state within yourself by which you connect opposing forces and express that connection in spirals through the body.

17 thoughts on “Aikido and the Floating Bridge of Heaven”