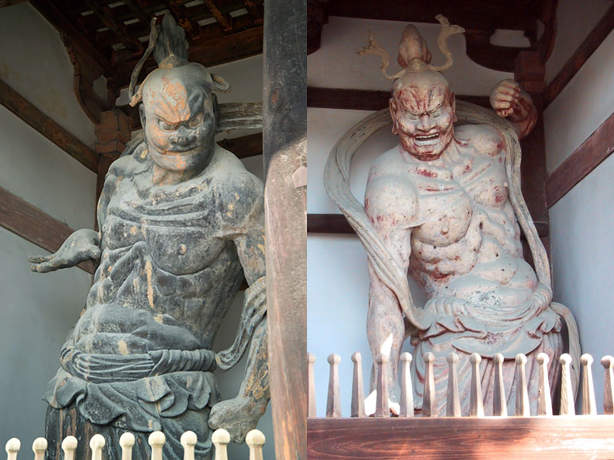 Kongo-rikishi statues at the gate of Horyuji Temple

Some thoughts on breathing in Aikido training.

The Kongo-rikishi statues that guard the gate to the inner sanctum of Horyuji Temple are the oldest in Japan. These “Guardian Kings” were said to have traveled with Shakyamuni Buddha, in order to act as his bodyguards.

“A-un” is generally used to represent the breadth of existence – the universe existing between the combined In-Yo opposites.

In the west this is sometimes pronounced as the Indian “Om” or “Aum”.

In China this is associated with Heng-Ha breathing exercises in the practice of…martial arts. There the statues are called the Heng Ha Er Jiang (哼哈二将, the two generals Heng and Ha).

Getting back to Aikido – here’s a short tidbit from Aikido Founder Morihei Ueshiba:

Then we have Gozo Shioda, who said that “Ueshiba sensei was always talking about breath power, breath power (kokyu-ryoku)”.

Now, let’s get back to the section that we examined in “Aikido and the Floating Bridge of Heaven“:

There’s a lot of talk about breathing in Aikido – breath power (kokyu-ryoku), breath method (kokyu-ho), breath throw (kokyu-nage), and so on.

There’s even a section in “Aiki Shinzui” (a collection of essays by Morihei Ueshiba) called 合気は息の妙用なり (“Aiki is the mysterious working of Iki (breath).”).

Ueshiba, of course, used “Kokyu” when speaking about the breath. However, he would just as often (perhaps even more often) use the word “iki”.

In “Takemusu Aiki” the word “Kokyu” is actually annotated in many places to be pronounced, phonetically, “iki”.

So where does “iki” come from? Here’s a quick hint:

Once again, we see those very interesting spirals that we discussed a little bit in “Aikido and the Floating Bridge of Heaven” and “Morihei Ueshiba, Budo and Kamae“.

Also, we see that “Iki” is a combination of the opposing In-Yo forces of Water and Fire to make the mnemonic phrase “Iki”, which also means “breath”.

Above, Ueshiba explains, in an uncharacteristically clear fashion. Actually this is a straight up rephrasing of Chinese cosmology right out of the Taoist tradition, in which the One becomes two opposing In-Yo forces, which then form the 10,000 things.

Now, before the peanut gallery comes out – no, I’m not saying that Morihei Ueshiba did not believe in the Shinto Kami.

What I am saying is that it is important to look at phrases like “Aikido comes from God” very closely in order to ascertain what he is saying with regards to technical methodology.

In my opinion, if one were, for example, to become a follower of Omoto-kyo in order to enhance their martial training (something that Ueshiba himself discouraged, by the way), that it would likely not be all that productive in martial terms.

Here we see the explanation expanded a little bit:

With this statement it is made clear that, for Ueshiba, the structure of the universe springs from opposed In-Yo forces – and that those structural In-Yo forces are manipulated through the In-Yo forces embodied in the breath.

Looking a little deeper into what he was talking about when he said “breath”, here is a bit from “Takemusu Aiki”, page 134:

The cross, by the way, is also important – so important that Ueshiba would sometimes write “Aikido” as “Aikiju” (the “Aiki-cross”), but more on that another day.

We can also see from further down below (and in other places where it’s written the same way) that the two types of breathing combined become “iki”.

In the above section from “Traditional Aikido Volume 5: Training Works Wonders, by Morihiro Saito”, we see Morihiro Saito saying, “The Founder also explained the combination of the Triangle-Circle-Square as (I) (ki) (breath), that form the root of science.”.

The 8 powers, which are the balanced opposing forces of in and yo, were described by Morihei Ueshiba in an article in the Aikido Shimbun published on February 10th 1974:

See “Aikido without Peace or Harmony” for a more detailed discussion of the 8 powers.

Still don’t know how to breath? Don’t be surprised, breath training is a complex and somewhat delicate task – most traditions place it somewhere among the more advanced training in their pedagogical structure.

“How to do” would be a more daunting task than I’m willing to take on over the internet, so if that’s what you’re looking for then you’re going to be disappointed.

I’m really just going to point towards some of the deeper meanings layered in Morihei Ueshiba’s writings and hope that some people will be interested enough to follow through in their own training.

With that in mind – I hope you found the above interesting.