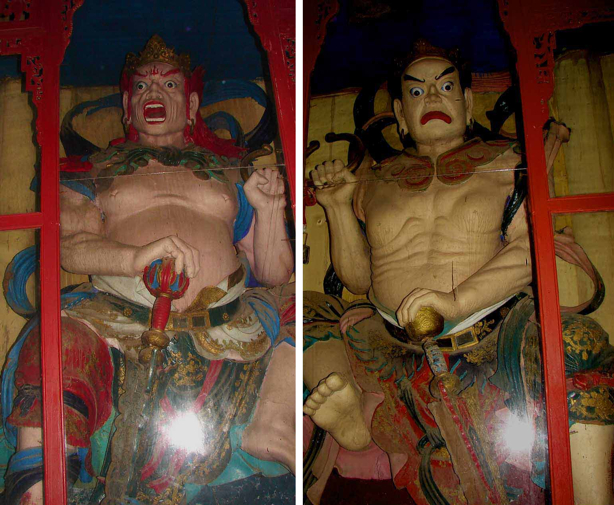 Above are two more Kongo-rikishi (“Guardian King”) statues of the type that we talked about in Part 1 of “Aiki, Iki, Kokyu, Heng-Ha and Aun“.

This time the statues are from the ghost town of Fengdu China – which is an entire city modelled on the Chinese Hell of Taoist mythology, built more than 1800 years ago. The City of Ghosts was a place of worship before the flooding of the Three Gorges due to the Three Gorges Dam Project. Today it mostly lies underwater – except for the sections that have been reconstructed (with some of the original structures used) for the tourist industry.

In the picture above the General Heng stands on the right – 哼, for inhaling. Note that his mouth is closed and his abdomen is contracted (this is the Naraen Kongo in Japan, with his mouth closed in the “un” syllable of “Aun”).

The General Ha stands on the left – 哈, for exhaling. Note that his mouth is opened and his abdomen is expanded (this is the Misshaku Kongo in Japan, with his mouth open in the “A” syllable of “Aun”).

Both of these generals are in “power stances”, stances that are meant to demonstrate their great power. This, especially the General Ha, may remind you of another demonstration of great power painted by Eiji Tamura:

Note the similarity to the statue of General Ha, especially in the abdomen, which is a classic representation of breath power development.

Did Morihei Ueshiba ever consider the Guardian Kings? Well – take a look at this statement:

And so, we get back to “breath power”. If you read the first part of “Aiki, Iki, Kokyu, Heng-Ha and Aun“, then you may remember this statement by Aikido Founder Morihei Ueshiba:

So we know that “A-un” breathing (“Aun no kokyu”, in this case”) was very important to O-Sensei.

Further, we know from the previous article that in China “Heng-Ha” breathing is a type of conditioning and training used employed in the martial arts.

Now, back to the figure of General Ha. As noted above, the General’s mouth is open and he is exhaling. In spite of the fact that he is exhaling his abdomen is strongly expanded, pressurized.

If we then look at General Heng, we note again that his mouth is closed and he is inhaling. In spite of the fact that he is inhaling his abdomen is strongly contracted.

So now we can see that, when we are talking about “Heng-Ha” breathing, we are generally speaking about Reverse Breathing (some exceptions aside) – the abdomen working in reverse of the way that it normally functions during the breathing process. That’s vastly oversimplified, but I’m not going to get any further into physical detail right now (or ever, probably, over the internet).

For now, we can see that the statement above by Morihei Ueshiba might now be translated:

But wait, that’s not all!

Aikido is the study of the soul. It is “Konpaku Aun no Kokyu”.

We saw above that “Aun no Kokyu” can be translated (roughly) as “Reverse Breathing” – but what about “Konpaku”? And what’s this stuff about the “soul”?

Let’s start with “Konpaku”. This is a phrase composed of two Kanji, the first of which means “soul”, and the second of which means…”soul”.

Now, back to this phrase, which we examined in “Aikido and the Structure of the Universe“:

The first section, “Ichirei Shikon” (“One Spirit, Four Souls”), is the structure of the spirit world.

In Shinto cosmology humans possess one spirit and four souls – the turbulent (aramitama), the tranquil (nigimitama), the happy (sakimitama) and the wondrous (kushimitama).

The “naohinomitama” is the one spirit that acts as kind of a container for the four souls.

When the two souls of Nigimitama and Aramitama are acting in a connected fashion as unified opposing forces, you have “Naohinomitama”, the “correct mind” which acts a container for both souls (in orther words, the One Spirit). Generally speaking, when the two souls are not balanced in opposition then Misogi is used to correct the balance – but more on that another time.

In any case, we know that we have two In-Yo forces that animate and energize the mind and body when they are working together correctly – ever hear of “Unification of Mind and Body”?

This is the unification of mind and body (which is a phrase used by Morihei Ueshiba even prior to Koichi Tohei) down to the level of the psycho-spiritual, perhaps so far as to represent the coordinated actions of the voluntary and involuntary systems in the body.

Further, we can now approach a translation of “Konpaku Aun no Kokyu” as “In-Yo Reverse Breathing” – with the caveat that the “In-Yo” here has some very far reaching and complex interactive implications.

If you’ve been participating in a certain type of training then this translation may ring some bells for you – even more so if you consider “reverse breathing” as a connection between two opposing forces, such as those described in “Aikido without Peace or Harmony“.

Now, back to the soul, as in “Aikido is the study of the soul”.

This seems quite straightforward – and it might be, but first, let’s consider that the character used for “soul” is not quite the soul in the usual Western sense of the soul, but is rather that section of the soul which activates the intellect – the character used here is actually the first character of the compound “Konpaku” above.

In Asia (and Japan) the “container” for that soul is the “spirit” (as in the One Spirit 一霊, which contains the Four Souls 四魂) – unlike in the West, where they are generally considered to be the same thing.

In this case, the character used – the Yo soul associated with the intellect, might be more properly translated as “intent” – the force of the intellectual decision that resides within the spirit or mind as a whole. This leaves us with:

Aikido is the study of intent.

Again, those participating in a certain kind of training will see the implications of this statement at once.

Even if you are not – “intent” is a primary factor in Chinese martial arts – so much so that entire arts are named after it.

Which leads to this interesting statement by Yang Chengfu (from The Ten Essentials of Tai Chi Chuan, Part 2):

The taiji classics say, ‘this is completely a matter of using intent rather than force’. When you practice taijiquan, let the entire body relax and extend. Don’t employ even the tiniest amount of coarse strength which would cause musculo-skeletal or circulatory blockage with the result that you restrain or inhibit yourself. Only then will you be able to lightly and nimbly change and transform, circling naturally.

Finally, compare the above statement to this one by Morihei Ueshiba:

There are no Forms in Aikido. No Forms, the study of intent is everything. You must not let everything be subsumed by Form. This is because you will become unable to move with subtlety.

Which has some rather far-reaching implications concerning the general practice of Aikido – if you ask me.