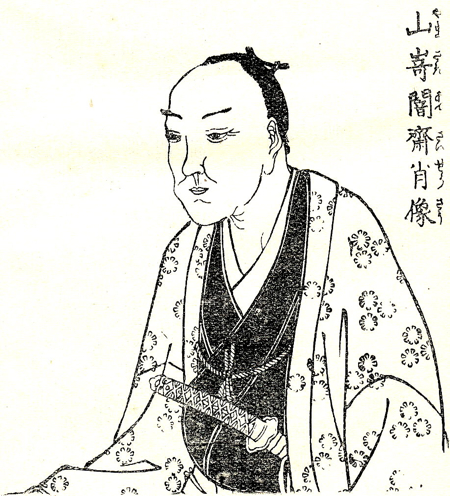 Ansai Yamazaki was an Edo Period Confucian scholar who started out as a Buddhist monk and was one of the first people to spread Neo-Confucian thought in Japan.

Yamazaki was also the founder of the Suika Shinto sect, and his work on Shinto theology was instrumental in breaking Shinto thought out from the specialized provenance of the shrines to a more general population. We’ll get back to how this relates to the Floating Bridge a little bit later.

In order to learn Aiki you must stand on the Floating Bridge of Heaven.

As you can see from the above quotation, Aikido Founder Morihei Ueshiba seemed to think that the “Floating Bridge of Heaven” (天之浮橋) was a pretty important thing.

Still – for all of its importance in his writings it is a concept that is generally not well understood. A direct student of Morihei Ueshiba O-Sensei once expressed it to me this way:

If you’ve read “Aikido and the Unknown” then you may have some idea why this kind of thing is not well understood, but just in case, here’s an interesting passage from Koichi Tohei (from “Ki no Kakuritsu” / 気の確立, translated from the Japanese):

Without a doubt, Ueshiba Sensei understood Ki. If we’re talking about that point, then I think that you could say that he was a genius. However, it is unfortunate that he never taught the true nature of it to his students. Even now I don’t know if that was because he didn’t want to teach it, or if it was because he was unable to teach it.

You may also like to take a look at “Morihei Ueshiba: Untranslatable Words” for an interesting story about Koichi Tohei himself and understanding of O-Sensei.

In any case, at this point you may want to take a moment to go back and look at the previous article “Aikido and the Floating Bridge of Heaven“, if you haven’t read it already, for some background on the structure of this training model.

Now…back to the Floating Bridge.

Here’s an interesting passage from an article by Yutaka Shimizu that appeared in Aikido Magazine (合氣道マガジン). Shimizu is a Bagua and Taiji instructor in Japan who has also trained in Aikido and Daito-ryu – he has published a number of interesting books in Japanese about Morihei Ueshiba.

Remember “Aiki Budo is the Way of Human Development“? In that article a scroll from Yukiyoshi Sagawa’s dojo appeared – I noted there that I translated “融和” as “reconciliation” in the text of the scroll. The sense of this, in my reading, is the bringing together of two opposites, and it is in this sense that I used “reconciliation”. In the passage quoted above from Yutaka Shimizu the same Kanji are translated again as “reconcile” – again, the bringing together of two opposites.

If you’ve read the articles noted above, then you should be familiar with Heaven-Earth-Man, In and Yo (Yin and Yang) and the opposing forces being referred to. There is also some slightly more technical discussion of opposing force pairs in “Morihei Ueshiba, Budo and Kamae – Part 3“.

For now lets get back to this quotation from Morihei Ueshiba, which was also cited in the first Floating Bridge article:

The left hand is Izanagi, the right is Izanami, in the center is Ame-no-minakanushi, this is yourself. This is standing on the Floating Bridge of Heaven and turning in a spiral. This is called Taka-ama-hara. Heaven and earth are one unit, water and fire are also one unit, all appears through Iki (breath). This is the endless appearance of the Kami. Aiki technique comes forth endlessly.

Here you can see that Ueshiba clearly delineates the combined opposing In-Yo forces, represented by Izanagi and Izanami.

You can also see that he cites the two basic forces in the body – fire and water. These are so basic to the model that Ueshiba would often write “God” (“Kami”) as a combination of these two characters – fire (Ka) and water (Mi) (火水, Kan and Li in Chinese).

These are the two basic forces in the body in Chinese internal martial arts – along with Heaven and Earth they form the four cardinal directions in Taiji, which are mapped to the four basic Jin (勁) energies of Peng (掤 / wardoff), Lu (履 / rollback), Ji (擠 / press), An (按 / push).

This basic arrangement of Heaven and Earth, In and Yo, Fire and Water was described in “Morihei Ueshiba and the Way of the Cross“.

I’d like to note here that once again he states that this model is essential for the production of Aiki technique.

Now, let’s look at who’s standing on the Bridge, and where they’re standing.

As stated previously, Ame-no-minakanushi represents the “Boss”, the person in charge – and Ueshiba states that this person is you, yourself.

If you are standing in the center, and In and Yo are spiraling around you, then this process must represent something that is happening in yourself, that is being created within yourself. I make the distinction because this is a very different thing than a process that occurs between yourself and another person.

This brings us back to a telling quote from Koichi Tohei’s book “気の確立” (“The Establishment of Ki”), previously cited in “Aikido and the Structure of the Universe“. It comes in the section where he discusses his break from the Aikikai:

I don’t want to get into whether his characterization of Kisshomaru Ueshiba’s interpretation is accurate or not, but what I will say here is that Tohei’s interpretation of the process as something occurs within yourself is, in my opinion, correct, and that this is indeed a critical point.

So – we have you, the “Boss” standing on the Bridge, but where are you standing?

If you are standing in the “center”, then you are standing between In and Yo – two opposing forces that are constantly cycling and shifting. The point at which they unite and divide from one to the other is the point of change, the neutral point (usually represented by the curving or spiral line in the Taiji symbol).

The only really stable position or “stance” from which to operate is on is this neutral point, which is itself constantly shifting – or we might even say…“Floating”.