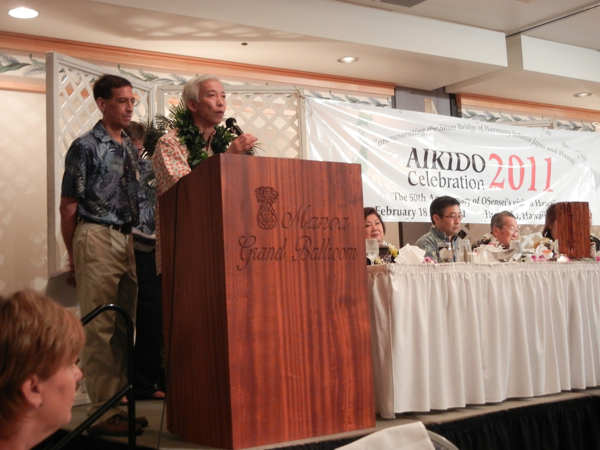 2011 marked the 50th anniversary of Morihei Ueshiba O-Sensei’s visit to Hawaii in 1961 to dedicate the opening of the Honolulu Aiki Dojo (for an interesting story from this time see “Morihei Ueshiba: Untranslatable Words“). Many of the local Aikido dojo cooperated in the effort to hold a commemorative seminar and event.

Moriteru Ueshiba (San-Dai Doshu and grandson of Aikido Founder Morihei Ueshiba) and his son Mitsuteru Ueshiba (Waka-Sensei) came to Honolulu to help celebrate this event, along with almost 500 Aikido students from around the world.

Seijuro Masuda Sensei from Aikikai Hombu dojo attended – here I am translating his stand-up (or maybe that should be fall-down…) routine:

Moriteru Ueshiba Doshu provided us with a message for the event brochure (this is the translation from the original Japanese that I provided for the brochure):

We have reached 50 years since Aikido Founder Morihei Ueshiba visited Hawai’i in 1961 to bless the opening of the Honolulu Aiki Dojo. It is truly wonderful that the Aikikai affiliated groups in Hawai’i have gathered together to hold a commemoration of this event.

In 1963, Ni-Dai Doshu Kisshomaru Ueshiba also visited Hawai’i for three months. During his visit he strove to deepen relations with the people of Hawai’i while instructing at the Honolulu Aiki Dojo. In successive years he continued to make frequent visits to Hawai’i dedicated to the spread of Aikido. Today, as I and my son Mitsuteru attend this commemoration, I feel the deep bond that has been made between Hawai’i and four generations of the Ueshiba family.

The Founder said, “Aikido shall become a Silver Bridge to connect Japan to the world,” and in the past 50 years these words have truly become reality, with this circle of peace expanding to 95 countries. Both he and Ni-Dai Doshu Kisshomaru Ueshiba would be happy to see that the people of Hawai’i have understood the “Peaceful Heart” called for by the Founder.

With the successful conclusion of this commemoration of the Founder’s memory, I ardently hope that this celebration will be a chance for deepening the bonds with the people of Hawai’i.

Throughout the years, Hawaii has seen visits from many major figures from the Aikido world – for years flights from Japan on their way to the mainland United States would have to stopover in Hawaii for refueling, giving opportunity for visits and training.

Besides, does anybody really need an excuse to come to Hawaii? 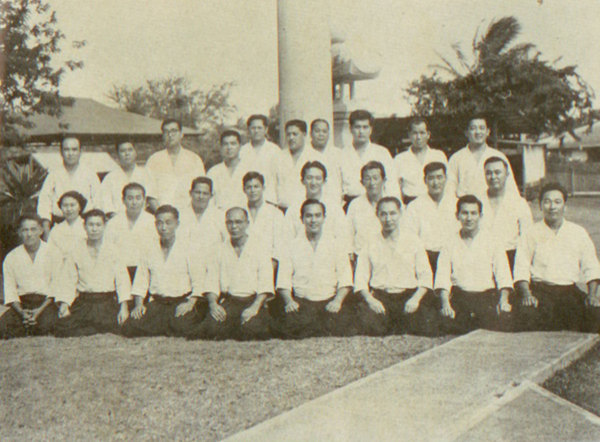 “Hawaii Aikikai Instructors” from the 1959 book “Aikido” by Koichi Tohei

Given the history of relationships in Aikido it’s not surprising that no mention was made of Koichi Tohei in Moriteru Doshu’s message, although he opened Hawaii to Aikido in 1953, but you can see “Koichi Tohei: Aikido Comes to Hawaii” for a little bit about Tohei’s historic arrival in Hawaii. 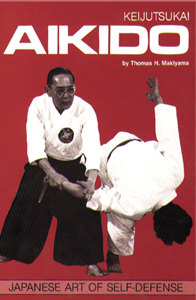 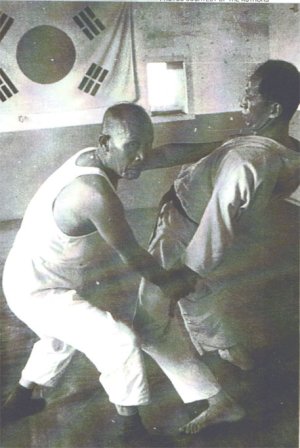 In the “we’re not sure if it’s true, but it sure sounds cool” category – Hapkido Grandmaster Choi Yong Sul maintained that he visited Hawaii with Morihei Ueshiba’s instructor, Sokaku Takeda, in 1932:

Did you ever leave Japan with Master Takeda for any exhibitions or teaching outside of Japan?

Yes, when I was about 28 years old it was arranged by politicians for my teacher and his most outstanding students to travel to Hawaii in order to give an exhibition tour.

What was your personal status on this tour?

I was the leader of the exhibition team under the direction of my teacher.

How many people were on the exhibition team and can you recall the names of any of the participants?

At the time of the Hawaiian tour there were five of us; Takeda, Sokaku, myself (Asao, Yoshida), Jintaro, Abida and two others whose names I cannot at this time recall.

Now, let’s get back to Ni-Dai Doshu Kisshomaru Ueshiba. Remember him? This was supposed to be about his trip to Hawaii…

Kisshomaru Ueshiba visited Hawaii for the first time in 1963. 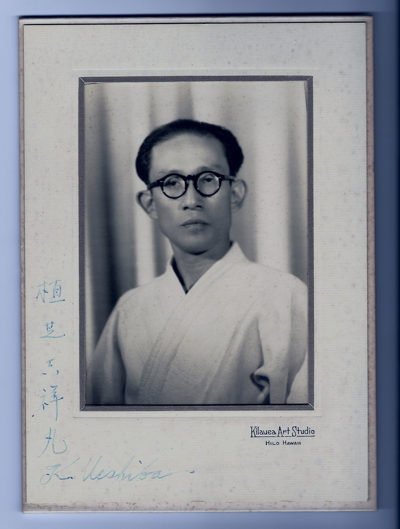 Speaking of overseas, let me speak a little about my first trip to America. Of course, this was also the first time that I had ever ridden in an airplane.

I went two years later than my father, in April of Showa year 38 (1963). At that time it was said that the Aikido population domestically and abroad had exceeded 50,000 people, and the shadow over the small impoverished hombu dojo had gone, transformed into a hombu dojo with promise for the future.

Incidentally, in June of the year that my father went to Hawaii student organizations such as the “Kanto Student Aikido Federation” and other groups were inaugurated. Business and culture centers were also developing apace, so there were no concerns about my spending time away from Japan at that time.

More than 800 people came to wish me well on the day of departure, and as I climbed the stairs to board the Japan Airlines flight to Los Angeles I found myself turning around and waving a bouquet of flowers left and right.

And so, on April 27th of Showa year 38 (1963) this is how I began my three month journey around Hawaii and America. Since this journey began with an invitation from the Hawaii Aikikai, my goal was to participate in the the 10 year commemoration of the establishment of the Hawaii Aikikai. In addition to being a special guest at public Aikido demonstrations, there were also scheduled visits to dojo affiliated with the Hawaii Aikikai and the California Aikikai.

I believe that we arrived at the Hawaii International Airport at around 10 in the evening on the 26th. We were greeted immediately by Kagesa, Wakatake, Ishida and about 23 other leaders of the Hawaii Aikikai, and about half of my face was covered with beautiful flower leis.

I would have many opportunities to visit Hawaii after that time, and each time I would be greeted by such a shower of flower leis that I would have to shut my mouth as my face was buried.

The day after I arrived my demonstration was televised throughout the islands, and a twenty minute interview was broadcast on KOHO (*a local Japanese AM radio station of the time).

On the 30th I departed early for California. After first visiting individual dojo in Los Angeles I would tour San Diego and San Francisco and then return to Hawaii on May 19th on a whirlwind schedule that would have me traveling around the Hawaiian islands for for the remaining two months.

Perusing my diary revives many memories.

It was a journey blessed with kind receptions and enthusiastic welcomes wherever we went. Aikido members were filled with the desire for serious training.

I was able to experience the current state of Aikido in each area of Hawaii personally and I remember how my dreams for the worldwide expansion of Aikido swelled.

Even without relying upon my diaries I can recall three strong emotions clearly.

One is the scotch whiskey that I drank and the flavor of the ripe mangos that I ate in Hawaii.

The Japan of that time was still in the midst of its period of rapid growth, and all imported goods were severely restricted. At that time, “Johnny Black” was said to be the best whiskey. In my time at Osaka Shoji it was common knowledge that for company affairs, valued customers or when someone was promoted the best congratulations that could be given was “Johnny Black”.

For a mere salaryman like me a flower bouquet was the best that could be expected, but on this official trip to America I was able to make the acquaintance of warm receptions where cups of “Johnny Black” were filled to the brim! Then, for someone who had just come out of the April cold the sweetness and fragrance of the mango filled me with visions of blooming flowers and the abundance of a southern paradise.

The second strong emotion struck me in the chest at the moment that I descended from the plane at the Los Angeles airport. The great expanses of America that I had glimpsed from above in the airplane stretched before me without end. Oil towers lined the horizon and were working vigorously.

(Ahh, Japan made war with such a large country like this! A country of this size and abundance… For all the talk of a noble spirit, what an absurd price to pay!)

To be defeated in the war was a hard blow to the spirit for someone like me who grew up during the war years. When I saw America with my own eyes that pain turned to wonderment, mortification and discouragement.

“Japan must quickly become a land of abundance also.”

I was not alone in this, I believe that most Japanese of that period who visited America for work embraced similar feelings.

Then, the third strong emotion. This is the blue sky of California. I have never experienced the inspiration to spread Aikido to the world so strongly as I did back then, looking up to the blue sky expanding without limits to the horizon.

Kisshomaru Ueshiba’s account reminded me of another account, by his son Moriteru. When Moriteru Ueshiba visited Hawaii in 2011 he spoke a little bit about this picture, taken at Haneda Airport at the time of Morihei Ueshiba O-Sensei’s departure for Honolulu in 1961: 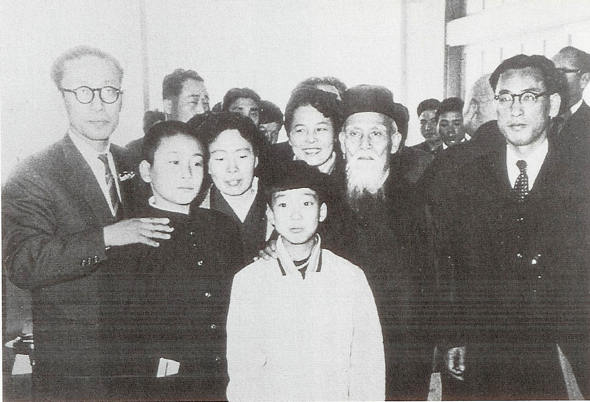 The text below is actually a translation I did for the subtitles on the Aikido Celebration 2011 commemorative DVD, which included the original interview with Moriteru Ueshiba. Here, Moriteru Ueshiba Doshu speaks about the above photograph:

In Japan, traveling to a foreign country is now a quite normal event. At that time, going abroad was a very difficult thing, so we all went to see the Founder off on his journey. Including the Ueshiba family I think that around 200 people went to the airport. There was a farewell celebration as well, these are things that are just inconceivable today. I went along as well, although I was just an elementary school student. While I was standing next to the Founder, a person praised me for coming all the way to see the Founder off and gave me a lot of candy – that was a good memory.

Continuing the interview, Moriteru Ueshiba also spoke about some of his memories of the time when his grandfather Morihei returned from his trip to Hawaii:

Morihei’s trip in 1961and Kisshomaru’s trip in 1963 were only two years apart, so the similarity of Moriteru’s recollections to Kisshomaru’s in 1963 are not surprising – but it makes me wonder how much modern Aikido has been influenced by the psychology of post-war Japan?