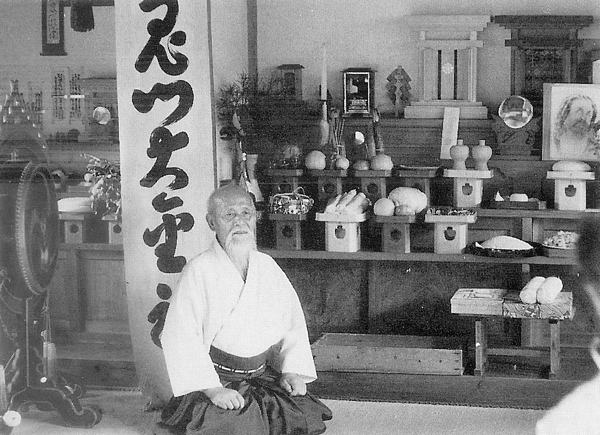 Aikido Founder Morihei Ueshiba in front of the Shinden in Iwama
Note the mitsudomoe design on the drum to his left.

If you haven’t read it yet, I highly recommend that you read Stan Pranin’s article “O-Sensei’s Spiritual Writings: Where did they really come from?” – it’s an important piece, and will lend some background to the rest of this post. Actually, most of this post consists of some thoughts I had after reading that article again.

To summarize from Stan Pranin’s article, there are two main sources for post-war materials from Morihei Ueshiba O-Sensei – “Takemusu Aiki” and “Aiki Shinzui”. The first is the transcription of a series of lectures by O-Sensei for publication in the Byakko Shinko Kai (“White Light Society”) newsletter. The second is also composed of transcriptions of lectures given by O-Sensei – this time the transcriptions were done by the Aikikai for publication in the “Aikido Shimbun” newsletters published by Aikikai hombu dojo.

The rest of what is publicly available is basically out of context fragments, mostly from oral transmissions (there are two pre-war sources of reasonable length, but we’ll leave those out for now).

So….what are the problems here?

Going backwards, let’s start out with the fragments. These are really all that we had in English, until the two translations by John Stevens above. Actually, one of his earlier publications was a collection of those various fragments, issued as “The Art of Peace“.

There is a real problem with fragments, on any subject, in Japanese, which is a highly contextual language. That’s even more the case when you’re talking about material that can be extremely abstruse and abstract – as is true with almost anything by Morihei Ueshiba.

Try giving the average Japanese person a one sentence quote from Morihei Ueshiba and in the vast majority of cases they will not be able to give you anything approaching an explanation of the meaning. In my experience, most Japanese native speakers don’t even try to make a guess – not even the Aikido practitioners.

Now, take those fragments, translate them into a very different language, and transport them out of the context of the culture that they were created in and you get…”The Art of Peace“. Something that most Japanese have difficulty understanding in the original language “understood” by non-Japanese reading an out of context translated text.

So what about the longer translations that present the material in full context – “The Secret Teachings of Aikido” and “The Heart of Aikido: The Philosophy of Takemusu Aiki“?

First of all, understand that I’m not complaining about the translations themselves.

A translation is never going to represent a completely accurate rendering of the original, since it is inevitably going to be filtered through the skills and knowledge of the translator. That always needs to kept in mind when reading any translation.

However, when you have a famous text it will normally appear in numerous translations by a wide range of translators. This allows you to compare different translations in an attempt to determine for yourself the most likely intent of the original work. Further, there will usually be a range of translations starting with editions created for popular consumption and a general readership all the way up to scholarly works with more footnotes then text.

Unfortunately, there is only one translation for each of these texts available at the current time, so….no comparisons – unless you read Japanese well.

For that purpose, both of the texts were greatly simplified, edited (with many things deleted) and rearranged in order to be comprehensible to a general readership.

This isn’t a flaw – unless you accept those translations as canonical – or it’s the only translation available (as it is here). In any case it’s always important to realize why a certain translation was produced, what was done to the original text and what the background of the translator is.

Even leaving those issues aside for the moment, there’s another problem – remember the example above with the fragments and Japanese native speakers? Well, now we have the quotations in much greater context – shouldn’t they now be much easier to understand?

In my opinion, yes, but that doesn’t solve the problem, which is that most non-Japanese don’t have the cultural context to understand what they’re reading.

Don’t feel bad, even most Japanese don’t have the cultural context to understand what they’re reading, when you’re talking about this type of material!

Here’s an example from Nobuyoshi Tamura:

O-Sensei would slip into the dojo, show a few techniques, and then slip out. If he felt like it he would speak for a while. We were all young, so mostly we just wanted to get on with the practice. (on the content of the lectures) He would talk about the gods – Izanagi, Izanami and so forth. In Sakurazawa-shiki (Macrobiotics) they have some of the same ideas, so I thought that he was speaking about something concerning In and Yo, but that’s about as much as I understood.

And another from Yoshio Kuroiwa:

Q: I’ve heard that the lectures were quite long.
A: I hated it (laughing). He’d talk about the Kojikki and things, but my legs would fall asleep and I couldn’t understand anything, it just made me cry. Thinking of it now really brings things back.

Then we have the two sources in the original Japanese – “Takemusu Aiki” and “Aiki Shinzui”. If you followed my advice and read Stan Pranin’s article then you see that there is an argument to be made that that the collection of essays in “Aiki Shinzui” have been compromised.

I’m not going to walk through the arguments again, except to say that if you read both works it seems clear to me that there are significant differences between the two texts – enough so that it almost seems as if they were written by different authors.

And that brings us to “Takemusu Aiki”, with essays that were transcribed by Hideo Takahashi: 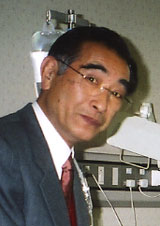 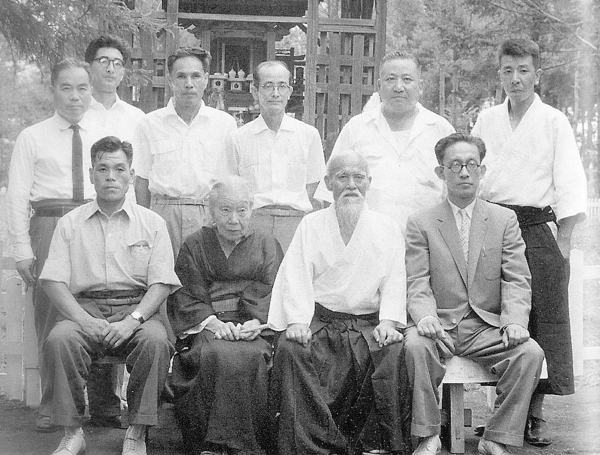 Hideo Takahashi was an editor and assistant to Masahisa Goi, who founded the Byakko Shinko Kai and created the Peace Prayer.

One reason why these transcriptions are considered to be more reliable by many people (including myself) is that Takahashi really had no horse in this race, he was drafted from outside to do one thing – transcribe Morihei Ueshiba’s lectures as accurately as possible.

Another reason is that these lectures were specifically intended for publication, and Ueshiba knew that – Takahashi consulted with him regularly, and there was ample opportunity for correction and adjustment.

Here are some interesting comments by Hideo Takahashi, translated from the Afterword to “Takemusu Aiki”:

Since Sensei didn’t like tape recorders, it was transcribed while working through the bewilderment caused by my lack of familiarity with Shinto terminology.

Each time I would go to visit the Ibaraki-ken Iwama dojo or the Tokyo Shinjuku-ku Wakamatsu-cho hombu dojo.

On hot summer days in Iwama Sensei would treat me to wine with a little water and sugar saying, “This is good to drink when it’s hot”. Once, when I relaxed a little and went out in an open-collared shirt he said, “Even when it’s hot, wearing a suit is good manners, isn’t it?”. Not wanting to cause problems, I bought my first summer suit. Even now, I still wear that suit.

I have fond memories of Sensei’s wife hunched over, serving us tea and sweets.

During the period that I was visiting Iwama about once a month, in Showa year 35 (1960) the Haiden (Front Hall) of the Aiki Jinja was completed, and in November Goi Sensei and about 100 members came to Iwama for the celebration. Sometimes Ueshiba Sensei would also come to the Byakko Hijirigaoka Dojo.

“Takemusu Aiki” contains explanations of the core principles of Aikido and the mysteries of the spirit. I believe that it is the theology of Aiki, the theology of Ueshiba.

However, the things that are spoken of here are just a small fraction of the total when compared with the notebooks that Ueshiba himself kept on hand. When I inquired after Sensei returned to the spirit world, I was told that nobody knew where they went. It is a terrible waste.

If this book can leave behind even one tiny sliver of the Kami of Aiki, the spirit of Ueshiba Morihei Sensei, then I will be blessed.

This book “Takemusu Aiki” was originally published in April of Showa year 51 (1976) by the Byakko Youth Aikido Doukoukai. For this edition I am honored to have received a recommendation and introduction from the Ni-Dai Doshu, Ueshiba Kisshomaru Sensei, the essays have been re-edited, photographs added, and a new cover added for this release to the world.

So where are O-Sensei’s lost notebooks?

I don’t know specifically, but I do know that there is a lot of material held by the Ueshiba family in Tokyo. Sadateru Arikawa used to spend some time with these materials while he was alive, but I don’t know if anybody at all is working with them anymore – and that would be a terrible waste.

7 thoughts on “Drinking wine with O-Sensei”