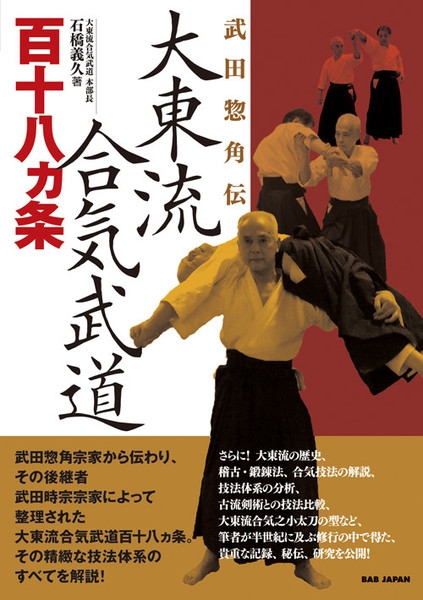 Yoshihisa Ishibashi (石橋義久) was born in Tokyo in 1938 and started training in Daito Ryu at the Daitokan dojo in 1964, learning Aiki Budo and Ono Ha Itto Ryu Kenjutsu directly from Sokaku Takeda’s son Tokimune Takeda. In 1969, together with Yoshimi Tomabechi (苫米地芳見) and Katsuyuki Kondo (近藤勝之), he opened the Katsushika Branch Dojo in Tokyo and was its first head instructor. He received an Ono Ha Itto Ryu license from Junzo Sasamori (笹森順造) and has a breadth of experience from zen to judo, kendo, Shorinji Kempo, and Chen Tai Chi.

The “118 techniques” in Daito-ryu cover the techniques contained in the Hiden Mokuroku (秘伝目録) certificate , from Ikajo to Gokajo, and were taught as the core curriculum of Tokimune Takeda’s Daito-ryu Aiki Budo. The book “Daito-ryu Aiki Budo 118 Techniques” (大東流合気武道百十八ヶ条) was written by Yoshihisa Ishibashi and published in Japanese in 2015 by BAB Japan publishing company (BABジャパン出版局), which also publishes the popular martial arts magazine Gekkan Hiden (月刊秘伝 / “Secret Teachings Monthly”).

This is the English translation of a section from Ishibashi Sensei’s book that deals with solo training exercises for the development of breath power (“Kokyu-ryoku”) and Ki development.

You may also be interested in “Sagawa Yukiyoshi, Masaru Takahashi and Breath Training in Daito-ryu” for a look at breath training in the tradition of Yukiyoshi Sagawa. 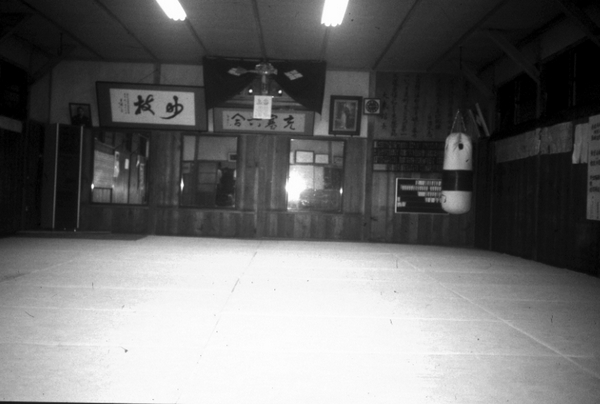 Training in Kokyu-ryoku (“breath power” / 呼吸力) is a method of practice that is required for the mastery of superhuman power and martial technique.

As I have mentioned previously, Aiki-age is an important training method for Kokyu and Ki. It is through training while focusing one’s awareness on the tanden (丹田) and Kokyu that one becomes capable of developing a power that is not muscular force.

Now I will introduce methods of training Kokyu and Ki other than Aiki-age.

Without mastery of normal abdominal breathing, even if one learns various technical methods one cannot expect them to be very effective.

Awareness of the Lower Tanden (下丹田の意識)

Through reversing the order of the abdominal breathing method one awakens the lower tanden and becomes capable of breathing deeply.

Therefore, from times past it has been said that abdominal breathing is “the origin of health” (健康の素). I recommend that you master it quickly.

Breathing methods (“kokyu-ho” / 呼吸法) can be practiced anytime that one realizes that they are in the appropriate environment, without choosing a particular time or place. For example, when one is riding the train by themselves, or in your bed, before you fall asleep. When one’s lower abdomen always moves up and down when one breathes naturally and unconsciously then one can be said to have mastered this breathing.

Repeat the above without straining.

Through the activity of Ki, and the power of Kokyu and vocalization, superhuman techniques become possible – these steps are required in order to realize this.

I will introduce the reverse abdominal breathing method of training contained in Tokimune Sensei’s personal notes.

Ki begins to take root throughout one’s body, begins to move, through relaxation of the mind and the softening of the entire body.

Ki is concentrated in parts of the conscious body. In our Ryu, we concentrate Ki in the necessary places of our bodies at the necessary time and apply techniques, or defend, parry, deflect or otherwise remove the power of the opponent.

When this can be done, Ki becomes a sharpened sensor in battle, and the opponent’s body can be felled through the use of one’s entire body as a weapon.

Aiki-age and Kokyu-ho, which I have discussed previously, are also effective as training methods for Ki, but here I will introduce a separate method for solo training in Ki.

(2) Use of the Fingers in Ki Training

Increased awareness of the fingers (the little finger and the thumb) is important in jujutsu and sword techniques. Either of these exercises can be done easily anywhere at any time. By all means, please try them. 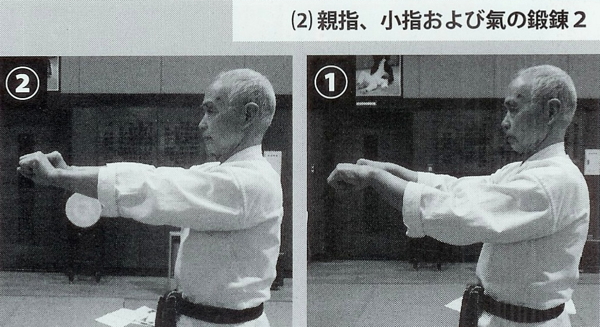 Here I will introduce a Ki training method employing the teppo movements used in sumo training. The following two methods differ in their breathing and the forces used when thrusting the hands forward.

When one turns their awareness to the focus of their Ki and stretching and loosening they can learn of the relationship between the movement and the breath.

Repeat the above on both right and left sides for about 15 minutes.

Repeat the above on both right and left sides for about 15 minutes.