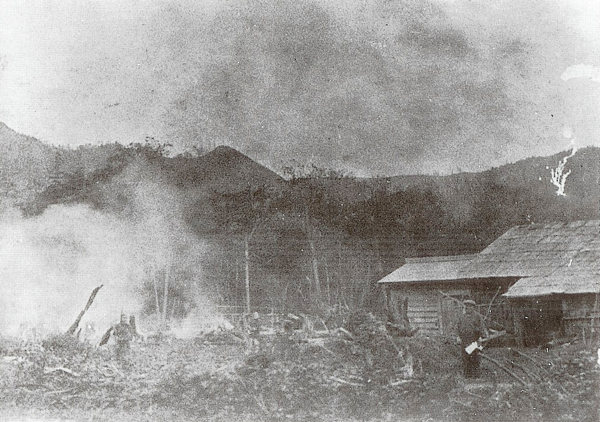 Morihei Ueshiba in front of a builiding in Shirataki, Hokkaido – 1913

In the spring of 1910 Aikido Founder Morihei Ueshiba O-Sensei gathered approximately 80 volunteers from 54 families and left Wakayama to establish a settlement in Shirataki Village (Kamiyuubetsu Village at the time) in the frontier lands of Hokkaido, where he was to live for eight years.

It was while he was living there that he met Daito-ryu Chuko-no-so (“Interim Reviver” / 中興の祖) Sokaku Takeda, at the Hisada Inn in Engaru, Hokkaido in late February 1915. Ueshiba would stay in Engaru for a month, participating in three ten day intensive seminars, after which he invited Takeda to come to his home in Shirataki.

This article is an English translation of an account in Japanese by Masashi Kubota (久保田雅士), an Aikido student and current-day resident of Shirataki Village in Hokkaido. It presents a number of recollections of Morihei Ueshiba’s teacher Sokaku Takeda through the eyes of the local residents of Shirataki. 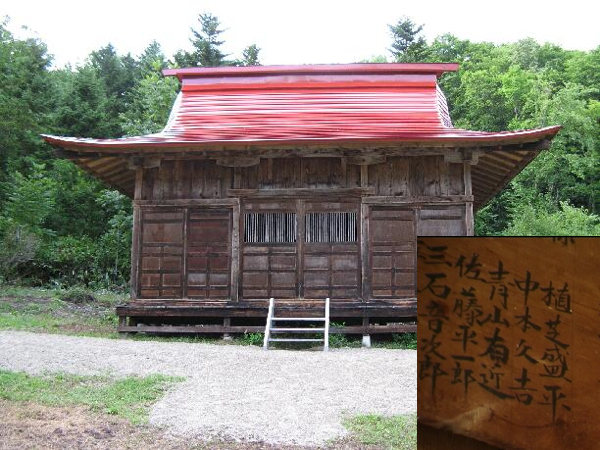 Sokaku Takeda Through the Eyes of the Residents of Shirataki

This is not really about the Founder (Aikido Founder Morihei Ueshiba), but I would like to record some stories that I have heard from the residents of Shirataki concerning Sokaku Takeda, who taught Daito-ryu to the Founder here and had a great influence on the birth of Aikido.

If anything, Shirataki is an area with a stronger connection to Daito-ryu than to Aikido. That is to say, the Founder was training in Daito-ryu during the time that  he was in Shirataki, and he lived in Shirataki for just eight years. On the other hand, after Sokaku received a gift of land from the Founder he kept a house in Shirataki until his passing. Sokaku was not in his home often, as he would travel around the country, but even so he was better known to the residents of Shirataki than the Founder.

Sokaku passed away in 1943, in other words there are older people who actually saw Sokaku when they were young. In order to find a person who knew the Founder one would have to go back to around 1919, so there are none remaining among the current residents of Shirataki who knew him.

Sokaku was called a “Judo Sensei” in Shirataki. It seems that the difference between Judo and Ju-jutsu were not commonly understood by the public. Apparently there were some who were fearful of that “Judo Sensei” Sokaku in Shirataki. The grandmother at the farm where I work was classmates with Sokaku’s third daughter Shizuka, so she would occasionally enter Sokaku’s home. She said that she would be afraid because of the many kinds of weapons around the house and wanted to get out as quickly as she could. 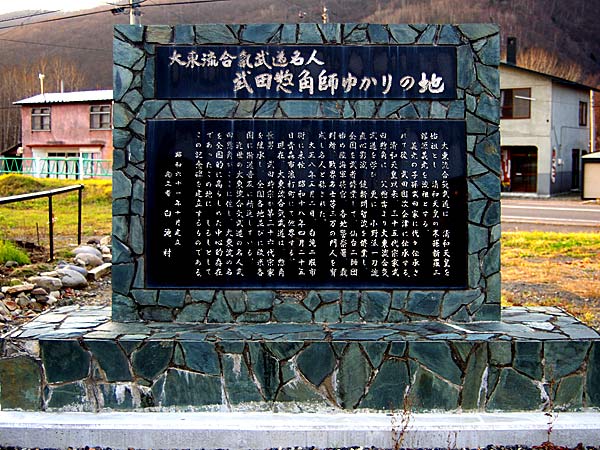 The most common story heard in Shirataki is the story of Sokaku’s garden. The spot where the Sokaku memorial stone now stands is on the last spot where Sokaku actually lived, a triangular piece of land at an “X” shaped intersection. It is said that when Sokaku saw somebody taking a short-cut through that triangular area he would become enraged and leap out to chase them. When he caught them at the end he would trounce them, applying his joint techniques. It is said that there were people who had deformed joints in their arms because they were caught by Sokaku.

There may have been some who thought that they could simply cut through the garden, but Sokaku’s caution was considerable. There are many accounts from teachers who had relationships with Sokaku that attest to this. From the point of view of Sokaku, who lived with with the warrior stance “When a man goes out he must think that he has at least seven enemies”, it was a matter of course to consider someone who had stepped on his land as an enemy. According to the novel “Daisetsuzan no Fumoto Kara” (大雪山のふもとから), which was written based on actual conversations with residents of Shirataki, even when there was apparently no one in sight they would be discovered cutting through the garden and a staff would come flying out of nowhere. According to this book, cutting through Sokaku’s garden became a kind of local test of courage.

There are also stories of Sokaku’s mistakes in the garden. One day Sokaku became angry at a husband and wife whose horse had eaten his strawberries. When he became enraged at the husband the wife shouted “What are you doing!”, and when she tried to tackle him she actually succeeded. It is said that Sokaku was so embarrassed that he instantly fled into his house. I was surprised that such a thing could happen to a master like Sokaku. It’s the same with the Founder, of course, but since it is usually the stories of courage that stand out this kind of story is really fascinating.

Aside from the garden stories, there is also a story that Sokaku charged people to cross the road. I am not sure of the truth of this story, but because of what they saw, and the harshness of his  character, Sokaku did not leave a very good impression with the residents of Shirataki.

The Founder settled in Shirataki as the head of the Kishu Group from Wakayama in order to develop the wilderness of Shirataki, and worked hard for everyone. Sokaku, on the other hand, with his harsh character and Aizu accent, didn’t have many chances to bond with people. However, he would give instruction in Daito-ryu. It’s not known how often he taught, but there were many people in Shirataki who received lessons from Sokaku. Today there is no one who has carried on Daito-ryu in Shirataki. Most of Sokaku’s student have passed on due to advanced age. With that background, it can be clearly declared “Aikido Country” today.

According to “Daisetsuzan no Fumoto Kara”, Daito-ryu was not the only thing that Sokaku taught. There is also a record in that book of Sokaku teaching Kendo. I knew that Sokaku was originally known as a Kenjutsu-ka, but this book was the first time that I had heard of this. Today enthusiasm in Shirataki for Kendo has dampened, and there is not much more than a junior Kendo group, but at one time there was a real rage for Kendo in Shirataki, and it is said that there were many strong fencers. When one considers that the origin of that Kendo was Sokaku then one can see what a long shadow Sokaku has cast.

Sokaku in His Later Years

Here are some of the recollections of those who were alive during Sokaku’s last years.

In the end, even a master cannot defeat age, and I have heard that Sokaku did not even walk much in his last years due to his incontinence. He would use a staff for that purpose, but it is said that the staff was extremely thick. His method of grasping the staff was different. Normally one would think to grasp a staff with the thumb on the top, but it is said that Sokaku would grasp it in the reverse, with the thumb on the bottom. Holding it this way he would be able to take a stance as if holding a bokuto simply by turning his hand. Even in old age he was always prepared for war. That the bokuto was so thick just lent weight to his ferociousness. Although his legs became weak, the strength of his arms, conditioned with the sword, must still have been in good condition.

Sokaku continued to travel around the country even after he turned eighty, teaching in various regions. When he went on those trips it is said that he could hardly walk and had to be supported when he went to the train station in Shirataki. However, it is incredible that he could travel alone, even in that condition. It was during one of those trips that he collapsed in the woods and never made his way home.

I don’t know much myself about Sokaku’s character. There was enmity between him and the Founder, and when listening to the stories from Shirataki I never heard a good impression of him, but his skill and dedication to a life of martial arts is quite fascinating. And of course, the fact that the Shirataki region was the place where Sokaku connected with the Founder holds a great attraction for me. 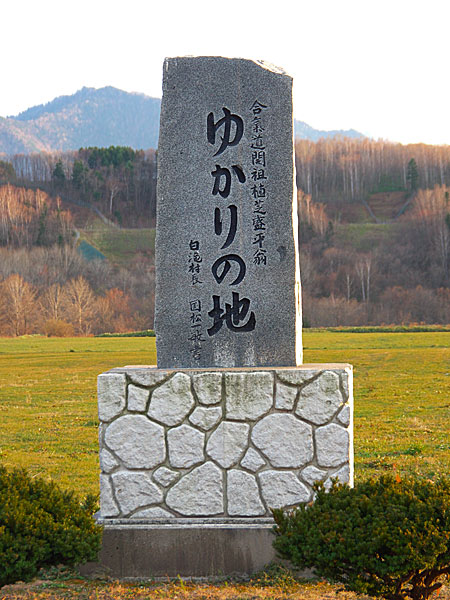 Memorial to Aikido Founder Morihei Ueshiba O-Sensei in Shirataki, Hokkaido
The memorial stands on land once owned by the Founder

6 thoughts on “Morihei Ueshiba and Sokaku Takeda in Shirataki”