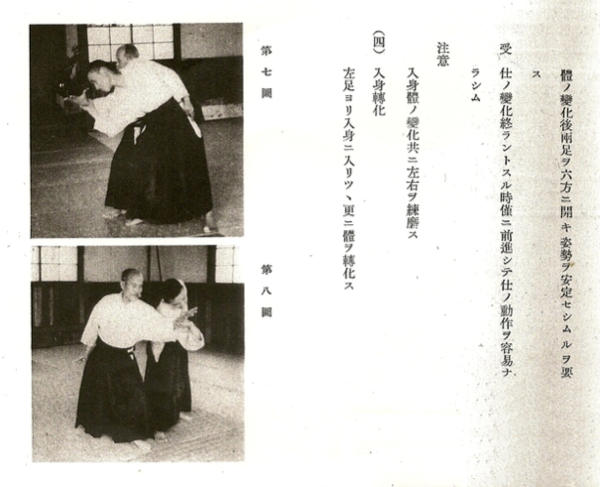 If you haven’t read “Morihei Ueshiba, Budo and Kamae” yet then you’ll probably want to go back and read that article first.

You may also want to read “Morihei Ueshiba, Budo and Kamae – Part 2“, which contains a response from John Stevens to the original article.

Now, take a look at the section above, “Tai-no-henka to the left and right”, scanned from Morihei Ueshiba O-Sensei’s 1938 technical manual “Budo”.

The Japanese along the right hand side reads:


After tai-no-henka (“body change”) you must open both legs in six directions (“roppo”) to stabilize your stance.

There are those pesky six directions again, noted in the previous articles. This time note that Aikido Founder Morihei Ueshiba specifies six directions for the purpose of stability.

Of course, “six directions” is commonly used in Asian cultures to mean “all directions” – up/down/forward/back/left/right. In and of itself, you can see that something that is balanced in all directions at the same time is inherently stable.

Exptrapolating further, something that is stable, and balanced in all directions, is also able to move in any direction, or to respond to a force from any direction.

In Taiji (and other Chinese arts, of course) this is manifested as “ward-off eneregy”, or Peng Jin (掤勁), a skilled force moving out in all directions. Here’s an interesting mention of Peng Jin, from “The Matrix of I Liq Chuan” by Sam Chin and Robert Hoffman (I recommend that you read the full article – it’s also available here as a pdf:

“Look! no matter what you do! you can’t touch me!” Master Sam Chin laughed. Continuing, he said “You’re so close, but why can’t you land?”

I had tried many times to move or strike him, but had no success. Kicks, strikes, entering in – they were all useless. After repeated failed attempts! I gave up. Laughing and panting for air, I asked, “What am I missing?” According to Sifu, I was missing an important piece of my foundation . In short. I could not enter his “spheres” – that is to say. I could not penetrate Master Chin’s defensive energy. Since that first encounter I have come to learn that what Master Chin called “the spheres” is closely connected to an energy named peng-jing (掤勁). Literally translated, peng means “ward-off” and jing means applied energy. Although peng-jing can also refer to a particular technique, it more accurately refers to the basic energy of dynamic balance.

Six directions creates a state in which a dynamic stability is achieved through balanced forces, and one is able to move in any direction at any time.

This article by Zhang Yun gives an additional look at Six Direction force, as used in Xingyi Quan, and notes that six directions practice is essential to the development of Jin (勁, a “skilled” force – usually referring to types of internal power).

As in Yi Quan, opposing forces around the circle are connected in Aikido. In “Aikido without Peace or Harmony” we saw that Morihei Ueshiba stated that this connection between opposing forces, formed by Ki, forms the basis for “Take Musu”.

Here is another quote from Morihei Ueshiba that brings to mind opposing powers, expressed in a circle or sphere:

In this thing called Aiki, first describe (draw) a circle. Drawing a circle is, in other words, opposing powers. Without touching with even one finger your opponent will be sent flying. Just to be able to do this one thing takes about 10 years. Let’s try to advance quickly.

Of course, we can see the stability in the examples above, but how does six directions (or the lack of them) contribute to being sent flying?

Well, first, take a look at this very interesting video clip of Chen Xiaowang (the 19th Generation Lineage Holder of Chen Family Taijiquan), where he describes human beings as surrounded by the sphere of opposing Yin-Yang forces:

Now, let’s look at another quote from Morihei Ueshiba, where he expands on the concept of the circle a little bit:

Draw a circle around a person’s power with the person in the center. Inside the circle is the limit of their range of power. No matter how physically strong the person is, outside the circle they will not be able to reach their power and they will become powerless. For that reason, when that power is made unreachable outside the circle and you hold them down your opponent will already be without power, and you can hold them down easily with an index finger or a pinky. If I remain inside my own circle while drawing the opponent outside of my opponent’s circle then it will all be decided (“it will all be over”).

Next, let’s take a look at some screen shots from the video above: 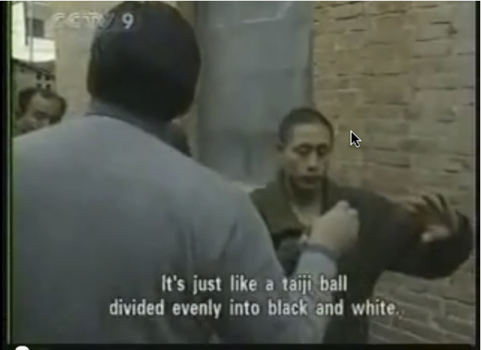 “It’s just like a taiji ball divided evenly into black and white.” 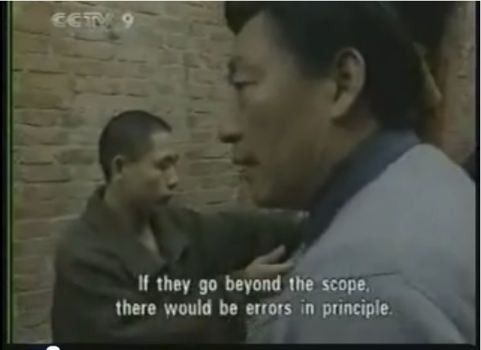 “If they go beyond the scope there would be errors in principle.”

Now, here’s a drawing by Bansen Tanaka (who started training with Morihei Ueshiba in 1936 in Osaka) from a privately published book (the diagram on the left side was mentioned in “Aikido and the Structure of the Universe“), “Aikido Shinzui”, published in 1976 (no relation to the later work published by the Aikikai). 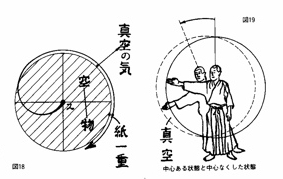 From “Aikido Shinzui” by Bansen Tanaka, 1976

In the diagram on the right side we see that the outside of the circle reads “The Void” and shows instances of when the center of gravity is correct and then it isn’t. This reminded me of: 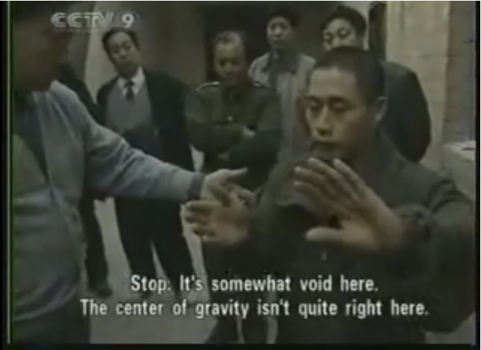 To finish up, here’s an interesting related statement made by Yukiyoshi Sagawa on February 24th 1970, from “Aikido no Ogi”:

A lot of things are said, such as Aiki is a circle, or centrifugal/centripetal force, but it’s nothing like that. If you are speaking of strength, it is a matter of slightly slipping out of the circle. If you slip slightly out of the circle and unfasten the endpoint of their power it will dissappear.

Which contains very clear echoes of the statements from Morihei Ueshiba and Chen Xiaowang, only this time from a Daito-ryu instructor.