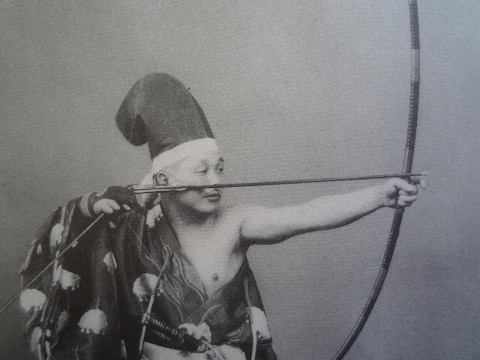 Generally speaking, the literal meaning of Tenouchi is “the inside of the hand” (in other words, the palm of the hand)  – in Kendo it can mean the swordsman’s grip on the sword, or in Kyudo it can mean the grip of the hand on the bow. Urakami Sakae above shows the classical Tenouchi in Heki-ryu archery (you may remember that there was a tradition of Heki-ryu archery in the family of Hiroshi Tada) . In classical arts it was given such weight that it came also came to be used as a way to refer to one’s level of skill.

This article is the English translation of an article on Tenouchi in Japanese written by Hakaru Mori, the Somucho (General Director) of the Daito-ryu Aiki-jujutsu Takumakai (大東流合気柔術琢磨会、総務長森恕), and successor to Takumakai founder Takuma Hisa, who trained under both Morihei Ueshiba and Sokaku Takeda. It originally appeared in issue number 82 of the Takumakai Newsletter.

While reading this article you may wish to keep the following quotations from Yukiyoshi Sagawa in mind:

6/12/1965
Not receiving the opponent’s power and making it so that their power will not enter into me when I attack is Aiki. This is not simply draining their power, you must also make an attachment. Aiki makes an attachment through the way that the hand is opened. Simply opening the hand is not Aiki.

8/28/1971
I was told by Takeda Sensei to open my hand in the way that a Morning Glory (“Asagao”) blooms, but I think that this means to open the hand while rotating slightly. I conceived of my Aiki while thinking about this kind of thing.

12/16/1973
Learn Aiki through Suwari-ryote-dori Age-te. This is how I learned the Aiki method of destabilization. The important Hiden (“secret transmission”) is (1) Turn the thumbs towards yourself. (2) Rotate your forearms. Because they rotate the attachment is formed. They rotate in the same way that a Mountain Rose (“Yamabuki”) opens. Putting power into each of the fingers is important.

6/10/1973
The Gokui (“secret”) of Aiki. The reason that an attachment is formed with Aiki is because of the rotation of the forearms. 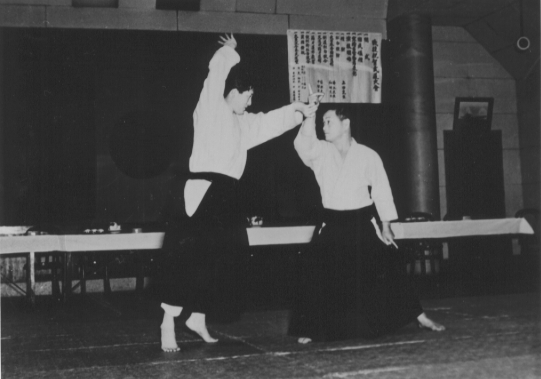 This is the Aiki that is applied to the palm of an opponent who has come to grasp one’s wrist using the back of one’s wrist.

Perhaps calling it “in the hand Aiki” (掌中の合気) or  “inside of the palm Aiki” (掌の裡の合気) would be easier to understand.

For example, this is the Aiki that is applied when you are grasped by both wrists and, raising both hands together, make the opponent’s body float – in other words, “Aiki-age”, or throw them directly in “Aiki-nage”.

The application is different, but this is also the Aiki in “Hiji-nobashi” (“elbow extension” / 肘延ばし).

Of course, when the opponent to whom this Aiki is applied is in a state of “Hiji-nobashi” their entire arm is extended rigidly, but at other times the opponent’s arm is bent at the elbow and the upper arm (above the elbow) and the lower arm (below the elbow) are bent into the shape of a hook (a reversed “L” shape) at the elbow.

Specifically, “Tenouchi no Aiki” is applied by a stimulus from the back of one’s wrists to the base of the thumb on the inside of the hand that the opponent has used to grasp the wrist.

At that time, the back of one’s wrist is enveloped by the inside of the hand of the opponent. As will be understood, the range of motion is extremely small. Accordingly, since it is not possible to make a large movement, the movement of the back of the wrist is also extremely subtle.

Even if Aiki is applied it does not appear that anything is happening to outside observation, and the person to whom Aiki is being applied has no particular feeling of power being brought to bear.

However, the result of this is in a class by itself. From the moment that this Aiki is applied the opponent is unable to release his hands or counter, and one may freely guide them and extend or bend their elbow, float their body, and even throw them down or topple them over. 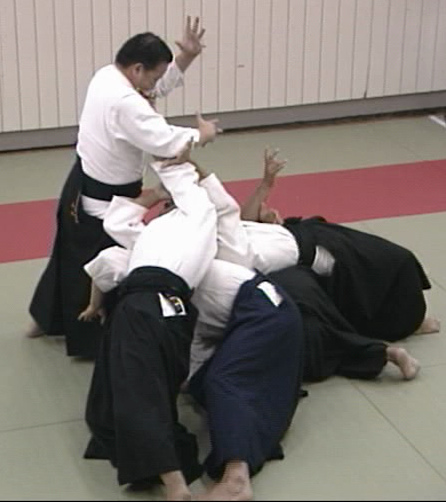 This is precisely where the typical scenario of Aiki-jujutsu appears.

“Aiki” is the drawing out of the opponent’s instinctive, unconscious movement. Accordingly, the opponent moves by themselves unconsciously when Aiki is applied to them instead of being moved by our power. We draw out the opponent’s power and deliver the barest minimum of stimulus necessary to the base of their thumb in order to lead them in the direction of our intent. No power is brought to bear.

If the “stimulus” is too strong then it will be perceived by the opponent as “power” and at that point the opponent’s awareness of movement will awake, a resistance or reaction to that stimulus will come forth, and the effect of Aiki will instantly vanish.

There can be no mistaking that “Tenouchi no Aiki” is a difficult Aiki. It is not difficult because of its complexity, rather the opposite – while appearing to consist of plain and simple and points, the knack (actually “breathing” 呼吸) is so subtle that understanding, grasping and learning it is extremely difficult.

The Sempai (Seniors) of this Ryu took the hands of their teachers, had Aiki applied to them, and absorbed this secret teaching through receiving the subtle sensations of their hands. I also struggled in this same way. Now we are trying to transmit that which we finally gained to our Kohai (Juniors), and once again the difficulty of explaining and transmitting this has hit home.

When training in the Takumakai,we practice Ryote-dori Aiki-age or Aiki-nage from Idori (“seated training” / 居捕り) or Hanza-handachi (“one seated, one standing” / 半座半立) after the warm up exercises and before we begin the main Kata practice. This training is for the purpose of achieving this Aiki, and has been a common practice since ancient times.

Both hands resting on one’s knees – the opponent grasps and holds them down while loading half of their weight onto them. From that point, while being held, lift the hands upwards – at this time one must apply this Aiki to the inside of the opponent’s hands using the backs of the wrists or the technique cannot be completed.

Beginners are also included in this practice, but everybody trains while sighing and cocking their heads in puzzlement, and when advanced students then circle around and demonstrate the complete technique without difficulty people are often seen unconsciously heaving a sigh of admiration.

In the Takumakai, Aiki techniques are taught from the beginning levels. This is also before Kata training is taught.

There is a reason for this, it is certainly not for the purpose of confusing the beginners.

Most of the Kata training in the Takumakai is training in joint techniques. What is required for this is “grip” (掴み) in Te-sabaki (手捌き) and “push” (押し) in Tai-sabaki (体捌き). By gripping the forearm of the opponent firmly and putting power into it one controls the opponent’s body indirectly. In order to execute the technique precisely some amount of muscular tension and strength is necessary.

In order to apply Aiki and execute Aiki techniques, the strength, technical points and other essentials required for joint techniques are not necessary requirements. You could even say that they are an impediment.

Of course, the reverse is also true, that however much one trains in Aiki techniques, it is absolutely impossible to achieve mastery of correct and effective joint techniques.

If one trains this way repeatedly, in the end both sets of technical principles will become fused in the body, and they will become able to freely repeat the natural techniques of Aiki-jujutsu. This is the ideal condition that all those training in Daito-ryu should seek to attain. 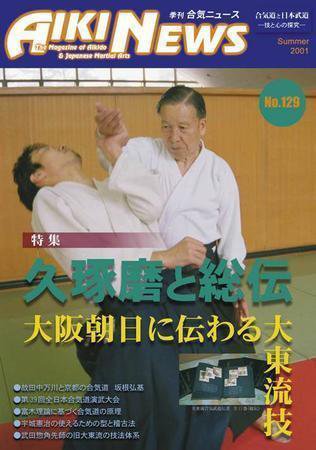 If one observes closely they will understand that most Daito-ryu techniques do not touch the body directly, but rather are created to operate on the forearm of the opponent in order to move their foundation.

In a manner of speaking, the forearm of the opponent is used as a remote control device in order to move their body.

Further, this is different from the need to draw the opponent in strongly and stick to their body in order to apply technique as in Judo. In Daito-ryu, since it is necessary to manipulate the opponent’s forearm, even when applying technique there is space between one’s body and the body of the opponent, and with only a few exceptions their bodies do not make close contact.

For that reason, Daito-ryu is sometimes called “distance Budo”. 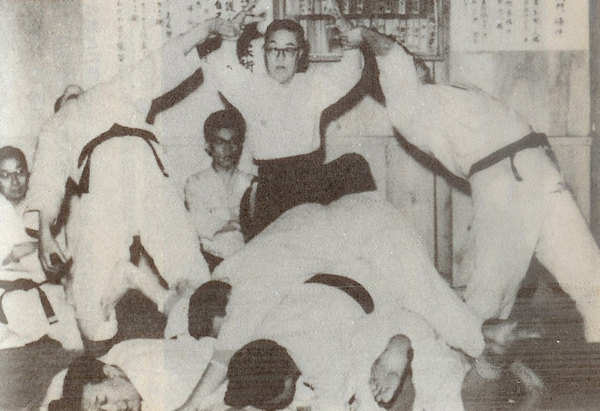 In addition to the deep technical principles involved in the methods of manipulating the forearm themselves, there are the three joints of the shoulder, elbow and wrist in the power transmitter of the human arm as well as the ligaments that hold them together and the muscles that move them. When one brings power to bear on the forearm to move the body each of the joints and their attached appendages sap power and act as a drag on the transmission of power to the body.

Concerning the technical principles related to methods of manipulating the forearm, let us first discuss how to use the arm of the opponent in order to transmit the power brought to bear on the forearm to the body of the opponent.

The answer is actually simple, in the end it is sufficient to make the three joints of the arm rigid at the same time.

Whether it is the joint of the wrist, or the joints of the elbow or shoulder, each section moves comparatively freely within its range of motion. For that reason, when power is brought to bear on the forearm these joints move instinctively to flee from that power and it is necessary to fix the three joints of the opponent’s arm when applying technique so that they cannot move.

When these three joints are fixed simultaneously the entire arm becomes simply and completely a power transmitter, and power brought to bear on the forearm is introduced directly to the shoulder joint and to the body.

Now, I think that it is necessary to discuss again how to fix all three joints of the arm simultaneously in joint techniques such as Ippon-dori (一本捕り). If we limit the discussion to Aiki techniques then there are two methods here. One of these methods is “Hiji-nobashi” (“elbow extension” / 肘延ばし), and the second is “Kagi-gata” (“key shape” / カギ型). Both of these are basic Aiki techniques. 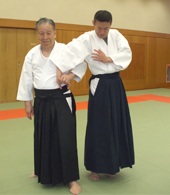 With the arm in this condition, even if you bring power to bear on the wrist that power will not escape through the movement of the joint, it will be transmitted directly to the body, and the body will be moved though that power.

Of course, when bringing this power to bear there are many subtleties and points that must be learned or you will be unable to sufficiently apply the technique.

However, in this shape, regardless of the fact that the elbow joint is bent, power applied to the forearm cannot escape through the joints. Further, the ability to move the body with a small amount of power is such a wonder that the limitless advantages and utility of this shape have brought it to be called the “Golden Key” (黄金のカギ).