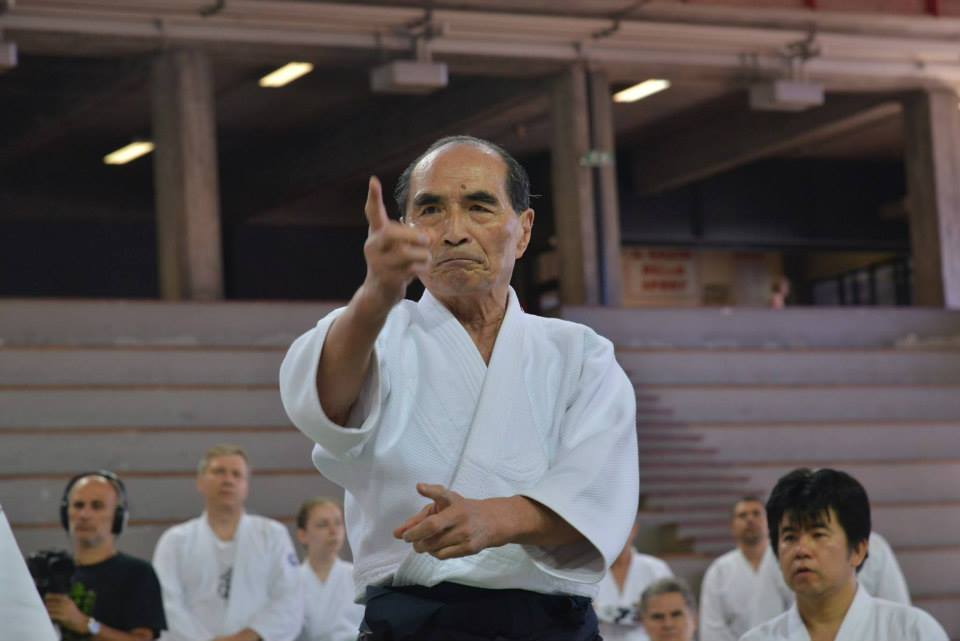 Aikikai 9th Dan Hiroshi Tada (多田宏) is one of the most influential instructors to come out of the post-war Tokyo Hombu dojo. Born in Nagasaki Prefecture, Japan December 13th 1929, he began training at Aikikai Hombu Dojo on March 4th 1950.

Tada Sensei has appeared on the Aikido Sangenkai blog, both in “Aikido Shihan Hiroshi Tada: The Day I Entered Ueshiba Dojo“, and in the series of articles below:

This is the English translation of a short piece written by Tada Sensei that recounts some of his memories of Aikido Founder Morihei Ueshiba, it appeared in the Aikikai newspaper “Aikido Shimbun” in March 1998 (Heisei 10).

In October 1964 Tada Sensei was sent to Rome, Italy in order to help establish Aikido in Italy. He had been preceeded there by Professor Salvatore Mergè, who was mentioned by Tada Sensei in the article “Aikido Shihan Hiroshi Tada: The Budo Body, Part 6“. 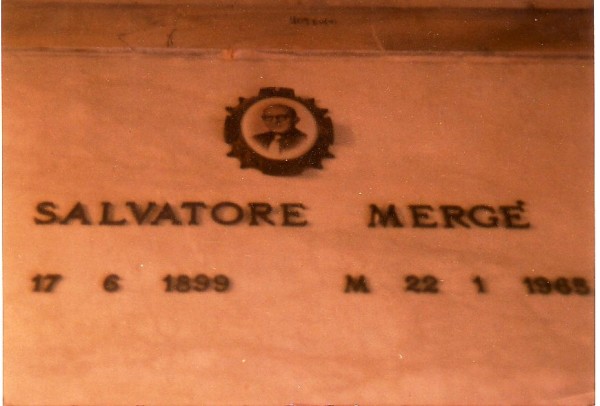 The grave of Salvatore Mergè

In 1942 Salvatore Mergè, a Japanese linguist and a member of the Italian diplomatic mission, became a student of Aikido Founder Morihei Ueshiba – perhaps the first occidental to do so. After returning to Italy in 1946 he taught privately and then helped to establish the first Aikido classes in Italy, taught by the sculptor Haru Onoda in 1959. 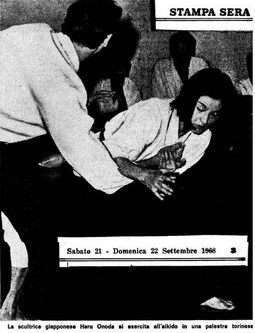 Here is some of the story of how he met O-Sensei, re-told by Stephen Serpieri, one of his Japanese language students:

“He had heard much of the Master’s deeds and of this new martial art he created, Aikido, but had never had the opportunity to see any of its “embukai” (public demonstrations). Intrigued by the stories that were made ​​of this master and the reputation that had been created around him, he decided to go to his dojo and ask to be admitted as a student of Aikido. The house of Master Ueshiba and the attached dojo were far outside of Tokyo, and to get to the Italian embassy ​​where Professor Mergè worked took over an hour by train. One day, before going to work, he went to the home of the teacher, saying that he was a lover of Japanese tradition and would like to know O-Sensei. He was made ​​to wait in the atrium of the house for a time, but was eventually told to come back because the teacher was busy. He tried again at other times but the answer was always the same.  Finally, after several failed attempts, he was brought into the house to get an answer to his request for a meeting with Master Ueshiba. He was made ​​to sit in a room with an elderly gentleman who was reading a book and did not raise his head when he entered. After a short time the person reading stood up and, without a word, he left the room. … When the day came that he was able to speak to the teacher finally arrived he saw that he was the person that had refused to speak to him as he waited in the atrium. He was accepted as a student, which was quite extraordinary, as the Master had not wanted any new Aikido students during the period of the war, let alone a stranger! “

Marco Muccio, a close friend of one of Professor Mergè’s students, adds:

“The interesting thing is that the first Aikido training with Salvatore Mergè was held in Morihei Ueshiba’s home, with particularly exhausting exercises for the development of the Hara, and ukemi on pillows on the floor!”

Here’s a little more about Tada Sensei’s journey to Italy, from his essay “Founders of Aikikai d’Italia” (イタリア合気会を創った人々), published in the Aikikai’s “Aikido Tankyu” magazine:

One hears the words “the foreign expansion of Aikido”, but what I remember most are the bells and steam whistles that I heard at the pier in Yokohama and the farewell parties with O-Sensei at their center that surrounded my Sempai going abroad – Mochizuki, Tohei and Abe. 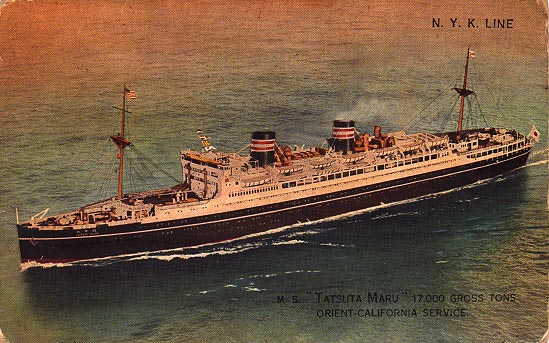 Of course I can’t reach back that far, and those memories may have overlapped with memories of tapes of my father’s trip abroad on the Tatsuta Maru in the beginning of the Showa era, but in spite of that I had vague thoughts at the time that someday I too would be going abroad.

At that time, those going abroad specifically to spread Aikido had to do three things:

Keeping faithful to to “Haisui no Jin” (Translator’s note: 背水の陣 – the “fighting with one’s back to the river” strategy made famous by General Han Xin in the Battle of Jingxing), with $250 in my breast pocket I left my home in Jiyugaoka just as the Tokyo Olympics were in their final stages. My tentative goal was Italy, and from there I would travel through South America and then return home. It was an incredibly uncertain plan, but those were my expectations at the time. 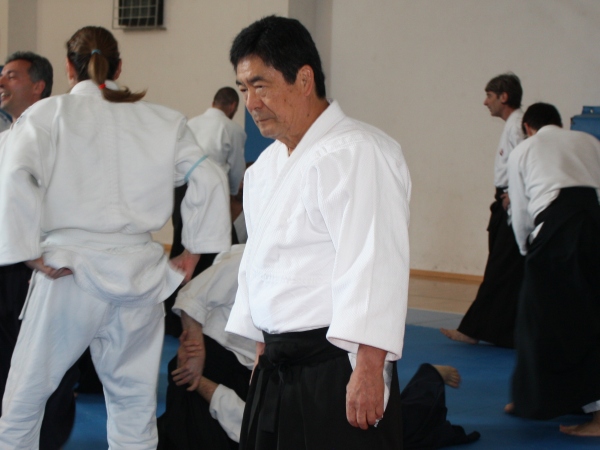 The first person to make the existance of the thing known as Aikido in Italy was Tadashi Abe (阿部正), who was active in France. Next were the sculptor Haru Onoda (小野田はる) and Mr. Kawamukai (川向), who had traveled to Rome as a tourist.

When I arrived in Rome I was introduced to a club at the Administration of the State Monopoly Autonomy (“Amministrazione Autonoma dei Monopoli di Stato”, the state monopoly on tobacco) which was run by Mr. Chierchini, and started training at that dojo. Six months later we had a demonstration at the National Police Academy, and then held a two month training session hosted by the Ministry of the Interior. This is how my Aikido life in Europe began. 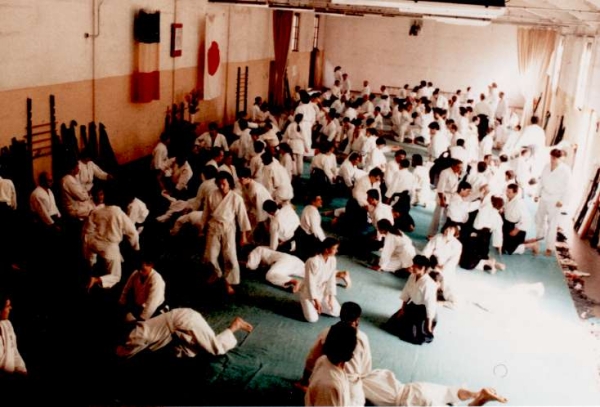 Professor Mergè, who was a member of the Italian embassy during the war and entered Ueshiba Dojo, was in good health in Rome, and people who had heard him speak of Morihei Ueshiba Sensei at the school of Oriental languages at which he taught were quick to enroll. Through the introduction of one of these people, Mr. Serpieri, in later years we would be able to use one of the of the buildings designated as a national property as a dojo. It was surrounded in four directions by the ancient Roman aqueduct and castle wall, monuments, the military museum and the department of waterworks, and after nightfall it was a place where not a sound could be heard. This is now the Italian Aikikai Hombu dojo. I lived in one room at the bottom of the stairs there. The students called it “Sensei’s Grotto”. 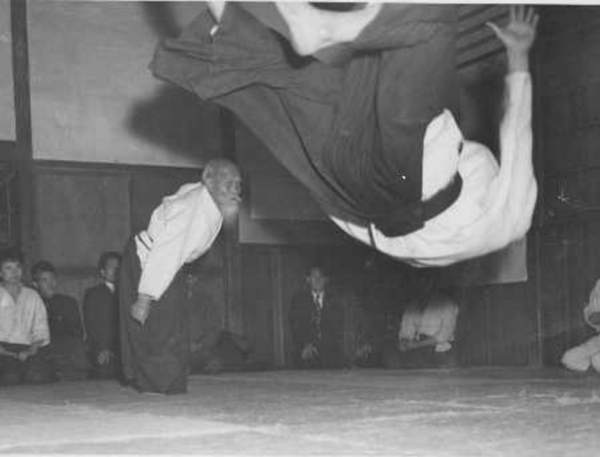 I became a student at Ueshiba Dojo on March 4th 1950 (Showa 25). I wrote about that day in “Aikido Tankyu issue 4“. When I first laid eyes on Morihei Ueshiba Sensei what made the strongest impression was that, towards a student like me, he took off his hat and introduced himself “I am Ueshiba” – that image and that voice, even now they remain deep in my memories.

At that time the morning and evening training at Ueshiba Dojo would have at most six or seven people, and the majority of those would be students from Waseda and Hitotsubashi universities, or members of the Nishikai and the Tempukai. Sensei would throw each one of them courteously and then everybody would practice. We students (門人 / “monjin”) would practice that technique with each other, and a little while after we started Sensei would say

“If you will permit me…”

Without thinking I would l look around, thinking that some important personage had come. However, the only people in the dojo were the baker Mr. Hata Kikuchi, who had started one day before I had, and us students. Sensei always used polite language like this during training.

That was likely because there were many royalty, army and navy generals, and people who represented Japan among Sensei’s students. However, that wasn’t the only reason – words are power. That politeness and the care that reached into every corner gave rise to a sense of refinement, and that was directly connected to the techniques of his Budo. 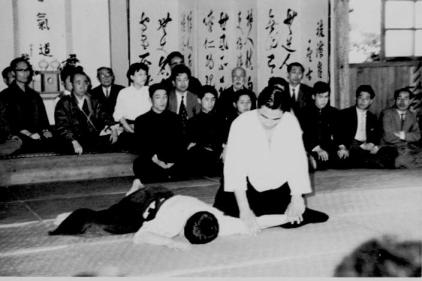 The young Hiroshi Tada during a demonstration at Aikikai Hombu Dojo

Sensei’s training was enveloped in a mysterious atmosphere. Even while moving to sharply suppress his opponents in an instant, he would somehow create a feeling of great warmth in the dojo. He would clearly adapt even to immature students like I was at the time, that kind of inspirational power was really incredible.

During one period I became aware of something mysterious. When I drew close to Sensei, my mind and body would feel as if they had somehow become transparent. When I was touched by Sensei that would become even clearer, it was as though the boundary between our bodies and minds had dissapeared. It was a powerful force that came from Sensei’s training in surpassing confrontation and we must have become caught up in it. That force was received in Ayabe in a direct heart to heart transmission (以心伝心) from Onisaburo Deguchi, who Sensei greatly respected, and I think that must have been further developed through Sensei’s own all-out efforts at training. When Sensei spoke of his own teachers, Sokaku Takeda Sensei and Onisaburo Deguchi Seishi, he spoke of them with real respect. Particularly when he spoke about Deguchi Seishi, he would call him “Seishi Sama”, using a double honorific title.

Morihei Ueshiba and Onisaburo Deguchi – around 1933

I was scolded severely by Sensei many times, but there were also times that I received undeserved praise. He often reprimanded me – “don’t manufacture”. By “manufacture” he meant when an Uke would take it upon themselves to take the appearance of being off balance even though they actually were not, releasing their grip or moving. 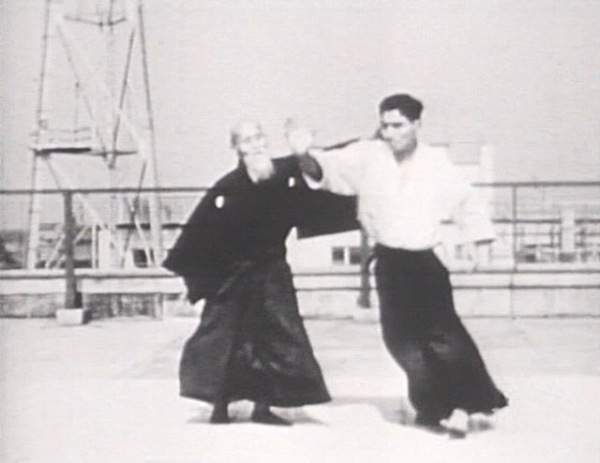 One day I was training alone in the dojo when Sensei entered and spoke beside me.

“Tada-kun, you should become a professional. a body like yours is the best for Aiki.” – if I had heard those words from Sensei now how moved I would be. However, at the time I thought it was normal to enter a large company after leaving the university as my father and grandfather had and live a life of leisure, so I listened absent mindedly as if he were speaking of some far off place. When I thought about it later I realized that those words of encouragement had come from the warm feelings in Sensei’s heart for his students.

The last time that I laid eyes on Sensei was the day before I left for Europe in order to spread Aikido there, October 23rd of Showa year 39 (1964).

Sensei encouraged me “Oh really, that’s quite soon. Go and do your best.” 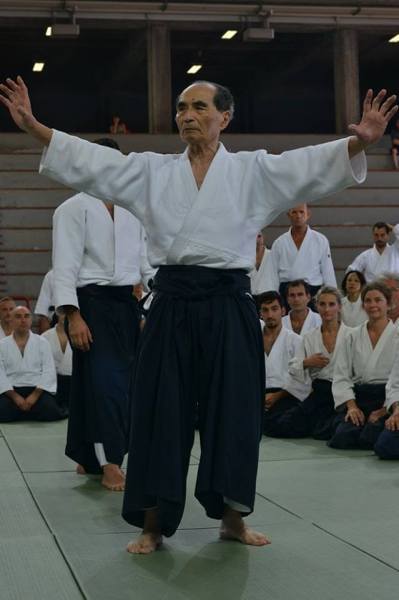 When Sensei passed away in Showa year 44 (1969) I was in Europe. When we received the news at the dojo in Rome I was surrounded by a moment of wordless silence. In Italy there is a sympathy and kindness towards other people’s hearts. The picture of Sensei in the dojo was soon surrounded by flowers of mourning. The members of my group sat in front of it in silence for many hours.