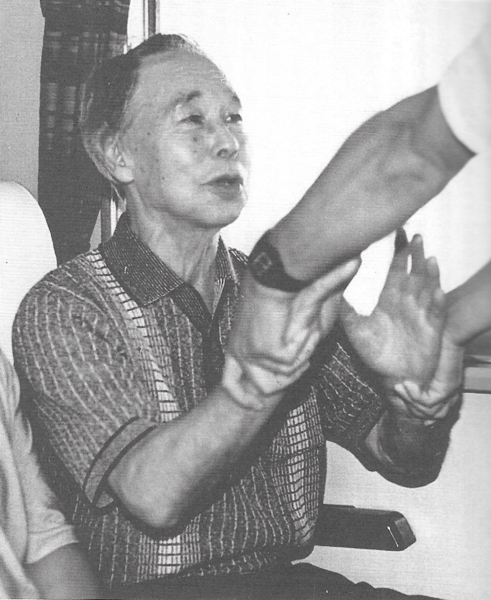 In Sagawa Dojo the techniques that Sagawa Sensei learned from Sokaku Takeda were organized into ten levels (“Gen” / 元). Only a few of Yukiyoshi Sagawa’s students received the Kyoju Dairi certification from Sagawa Sensei, and among those only three have completed the 10th Gen.

One of the three student to have completed 10th Gen with direct instruction from Yukiyoshi Sagawa is Tatsuo Kimura (木村達雄), a long time student of Sagawa Sensei. Born in Tokyo Japan in 1947, Kimura Sensei is a well known mathematician and professor at Tsukuba University. He published two books about Sagawa Sohan (宗範) that have been translated into English (the latter one only partially) – “Transparent Power (透明な力)” and “Discovering Aiki My 20 Years with Yukiyoshi Sagawa Sensei (合気修得への道―佐川幸義先生に就いた二十年)”. He also holds a third-dan in kendo and a fifth-dan in Aikido, which he studied under Seigo Yamaguchi (山口清吾).

You may wish to read Part 1 of the interview before reading this section. 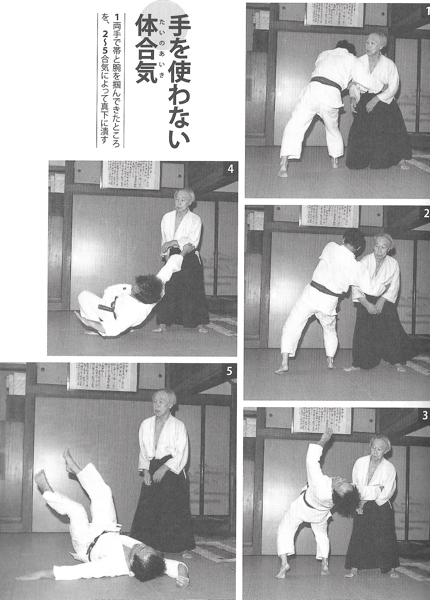 Q: In the end, Aiki is the heart and soul of Daito-ryu, isn’t it?

A: That’s right. Those who came from the outside included many high ranking practitioners of other forms of budo, and it was my responsibility to pair up with that kind of person in the beginning. I thought that it would be unforgivable to lose to these people, so I repeated the conditioning exercises that I had been taught by Sensei almost twenty-thousand times every day.

But Sensei told me one day “Whatever conditioning you do, once a new person masters Aiki it’s all over! That’s the way that Aiki is.”, and from that time I thought that I must grasp Aiki no matter what. That is to say, even though I could not be defeated by other people after heavy training in the conditioning exercises that I spoke of before, when I got caught by Sensei there was nothing that I could do. And then Sensei told me that it was because he understood that one could be defeated through Aiki no matter how much they were conditioned that he taught me the conditioning methods, and I thought that I understood.

(*Translator’s Note: the language here is as in the original, and is somewhat awkward. The sense is that Sagawa Sensei would teach the conditioning exercises, but without explanation. The exercises are necessary for developing Aiki, but are not themselves Aiki, so he would watch to see if people could grasp the connection. If they did then they were worth teaching, if not then…)

Sagawa Sensei would never teach anything about Aiki straight out. There was a heart and soul called Aiki, and he would teach the technical methods on the periphery of it, until he got quite close to the components of the heart and soul. In other words, he would teach that much, and then watch to see if one could grasp the components of the heart and soul. He thought that if someone could not grasp that then there was no point in teaching them. Originally, Sagawa Sensei himself expended considerable effort until he mastered it at last, so he thought that it natural that the person learning should invest that kind of effort.

For that reason, it was inevitable that he would concentrate the people that he needed to teach and bring them up intensively. He set up the steps of 1st Gen and 2nd Gen so that people who established their capabilities and zeal could progress ahead of the others. 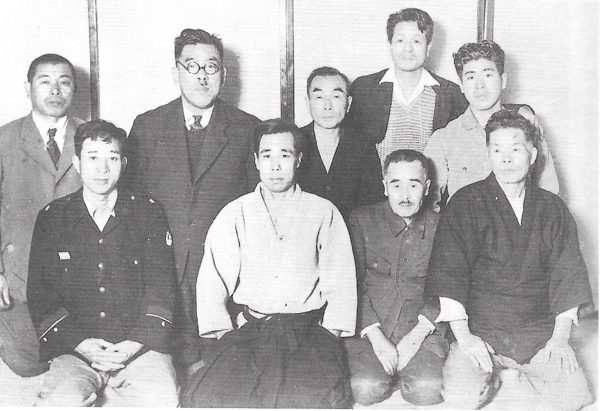 Yukiyoshi Sagawa (front center), around the time that Sagawa Dojo
was opened in Nakano-ku, Tokyo

Q: Among those people are some who don’t speak well of Sagawa Sensei, giving as the reason that they were never able to take his hand, even once.

A: I know that there are some people like that. However, in the majority of those cases those types of people have some points of their own that they ought to consider. Just as the student chooses the teacher, the teacher also has the right to chose the student, and I think that it is those who do not understand this point who are in the wrong.

For that reason, if one cannot be taught directly by the teacher then one must change themselves into a student that the teacher desires to teach. I myself was refused admission at first, and was only admitted on the condition that I would not be taught. Basically, it was thought that I had come to steal techniques to use in Aikido. For that reason I was not taught, even slightly, by Sensei in the beginning. But I changed that through my own efforts. In my case, I thought that at least I would try to become, even a little bit, a good student for Sensei. That sincerity gradually got through, and Sensei began to teach me. That is the effort of the student. In other words, it is really that, more than learning, one must stand in Sensei’s shoes and become the kind of person that Sensei would think to teach. Expecting to be taught as a matter of course without doing that is a mistaken understanding.

Besides, if one did not adopt a teaching method like Sagawa Sensei’s then I think that a technical method of such depth and difficulty as this one would not survive. From the very beginning it is not something that can be taught equally to all people, and if one did something like that it would be impossible to maintain the technical level of the art. If it is a matter of the form of the technique then one can make an explanation, but the essence of the techniques is an area that cannot be explained with words. Aiki is particularly something that is mastered through the internal senses. For that reason, it is impossible without the capability and zeal of the person learning, their own training and conditioning and their ability to understand. So if one stands in the place of the instructor it is inevitable that one will choose the people that they instruct.

Q: In other words, as concerns instruction, if one does not have an attitude like that then it will be difficult to preserve the level of the techniques?

A: That’s right. At least, of those who were actually able to use Aiki, there were only Takeda Sensei and Sagawa Sensei. If it’s just form then there are many people who are doing it, but there were only two who were able to apply it when an opponent came to attack in earnest. However, the fact that there were those who could use it is without doubt, so I would somehow like to leave this behind for the human race.

I’m hesitant to mention a personal matter, but with regards to Aiki I have repeated a long process of trial and error. When I was fortunate enough to get it right and destabilize someone I would think “Ah – is this Aiki?” and feel good, but when I tried it on Sensei he would yell “No, no, that’s just strength! Aiki is like this!”, and when I tried it it was completely different from what I was doing. I would give up and think of a different method. But that would also be wrong. This happened many times. 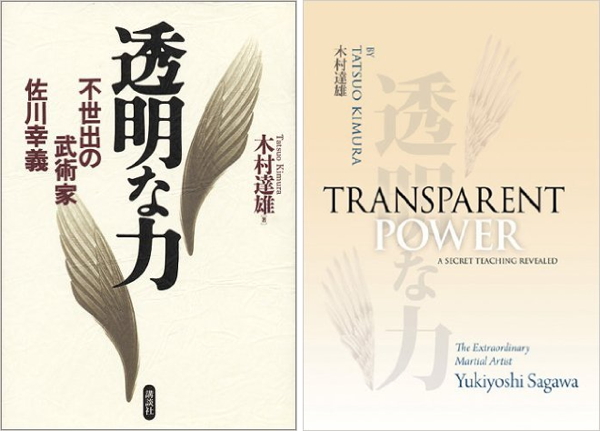 Q: What motivated you to write “Transparent Power“?

A: At first it was the fact that in order for someone to get that much real power takes incredible effort. If that is the case, then such a person should be formally recognized, shouldn’t they? I don’t really want to say this kind of thing, but I think that it was a tragedy that even though Sensei had such real power he lived a life that was not formally recognized because he did not put himself out in the world, while at the same time there are those people who are all talk and have nothing yet are selling their false reputations. That thought is what motivated me to write the book.

In the beginning Sensei did not participate in any way. However, little by little my resolve drew him in and he contributed things such as the personal history in the beginning – he also proofread the manuscript. Thanks to that, three years ago, I can remember even now, I was able to publish it at last on March 24th. However, I think that was the last chance to write a book like that one. Oddly, Sensei passed away exactly three years after that book was published. Perhaps there was some kind of connection…

Q: Reading the words of Sagawa Sensei that were recorded in that book one senses that he always kept a positive attitude towards budo. More than anything else he believed in the possibilities of Daito-ryu to the end, his immersion in that is wonderful. Each time that I read it I always think that this is what a budoka must be like.

A: At one point Sensei and I developed the habit of talking before training in the kitchen and from the many things that we discussed I selected those parts that were not related to technical methods. If you can gain some appreciation of him from that then I think that there was some value to writing that book. For the most part, it is only those that give up on becoming strong at some point that try to rationalize the matter by saying “trying to become strong is superficial”. But Sensei was different. Right down to the very end he never abandoned his aspirations. I would really like the world to know of the life and the spirit of a Sensei like that.

Q: I feel the same way. Thank you for taking time out of your busy schedule today.