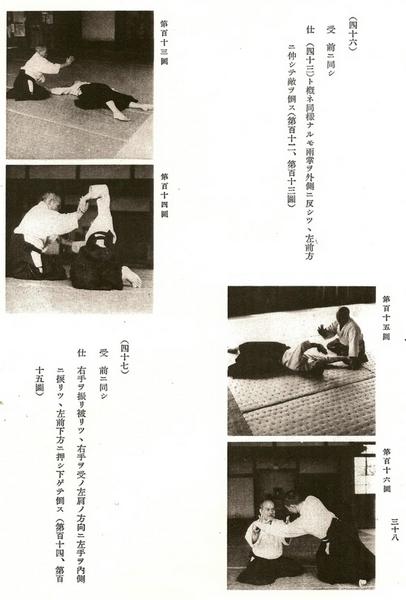 1938 saw the continuation of the Japanese war in China, increased economic sanctions against Japan by the United States, and and the formation of the precursor to the “Greater East Asia Co-Prosperity Sphere” (大東亞共榮圏), the “New Order in East Asia” (東亜新秩序). It saw the passing of the National Mobilization Law (国家総動員法) in the Japanese Diet, putting the national economy of the Empire of  Japan on a war-time footing.

1938 was also the heart of the golden years of Aikido Founder Morihei Ueshiba’s Kobukan Dojo, known as “Hell Dojo” for the severity of its training.

Mr. Kimura began training with Morihei Ueshiba O-Sensei in 1938, in an art called “Ueshiba-ryu Aiki-jutsu”, at the Kobukan Dojo that had been opened in the Shinjuku area of Tokyo in 1931. What follows is the first part of a two part English translation of his memories of that time from June 24th 1987 which originally appeared in the tenth anniversary edition of “Aikido Kodaira” (「合気こだいら」十周年記念誌), published on October 30th 1988. 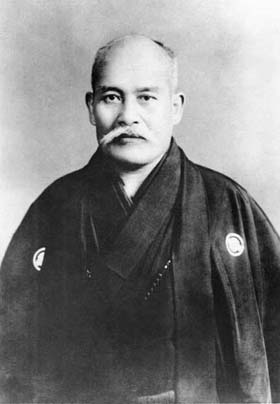 This year (Showa year 62 / 1987) I have reached “Koki”. Counting years I have already become an old man of 70. Now I’d like to look back 50 years to my younger days and talk about my memories of Aikido.

(Translator’s Note: “Koki” is an older way of saying “seventy years old”, from the classic poem by the Chinese poet Tufu (Toho, 杜甫, in Japanese) – “Jinsei nanaju korai mare nari” (人生七十古来稀なり), meaning that to reach 70 is a rare occurrence.)

I began Aikido in March of Showa year 13 (1938), at the age of nineteen. At the time there was no such name as “Aikido”, it was called “Ueshiba-ryu Aiki-jutsu” (植芝流・合気術) and the dojo was called the “Kobukan Dojo” (皇武館道場).

As to the reason why I began Aikido, at the time I was training in Judo at my school’s Judo club, but the Judo contests weren’t divided into weight classes as they are now – everybody competed in the same division. That put smaller people like me at a disadvantage when competing. 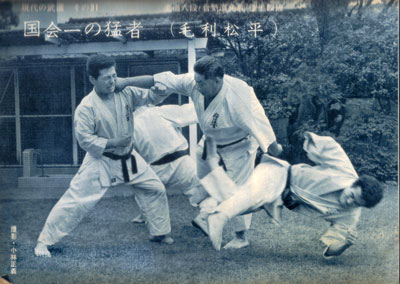 Title reads: “The toughest man in the Diet”

So it was at the point where I was wondering if there were some method in which a smaller build was not a disadvantage. He has already passed away, but I had an acquaintance named Matsuhei Mori (毛利松平) who had a 5th Dan in Judo from the Keio University Judo club. He later became the Minister of the Japanese Environmental Agency. This person told me “There is an incredible master of Bujutsu in Tokyo, a man called Mr. Ueshiba. If five of us actively training 5th dans grab a person at the same time then we can almost always defeat them. But even when we grab onto that Ueshiba Sensei at the same time, Sensei just sends everybody flying with one shake of his hips. And when using the sword, he is number one in Japan.”.

(Translator’s Note: Matsuhei Mori, July 16 1913 – May 24 1985. Matsuhei Mori was a member of the Japanese Diet and served as the Minister of the Japanese Environmental Agency. He was student of Aikido Founder Morihei Ueshiba,  Judo, and Kyokushin Karate, and was a mentor to Kyokushin Karate’s founder Masatatsu Oyama (it was at his suggestion that Choi Yong-I took the Japanese name of “Masatatsu Oyama”). He also served as the Director of the Nihon Budokan.)

At the time I was an exchange student at a school in Tokyo from Dairen (Translator’s Note: 大連 / Dalian – leased by the Japanese as a port city from the puppet state of Manchukuo, Japanese occupied Manchuria) in China. Since I had the good fortune to be studying in Japan I thought that I certainly wanted to train under one of the world’s masters and applied to become a student.

At that time in Aikido nobody could become a student without an introduction. So I asked Mr. Matsuhei Mori to write me a letter of introduction, then I went to the Kobukan Dojo to visit Ueshiba Sensei for the first time and ask for permission to become a student. At the time, somewhere in the back of my mind I had a sense of unease. Actually, in my mind I had imagined Sensei as a frightening figure who could crush ogres, but the Sensei that I met was an affable white haired grandfather around 50 years old who was even slightly smaller than me. In any case, I politely asked for permission to become a student, and Sensei told me that it would be alright. Even now I remember that warm and peaceful spring day with the spring sunlight filling the dojo with light.

After that I made a written oath. I was told not to speak to others about the content (“otome-ryu”) of the oath (Translator’s Note: 御留流 / “otomeryu”, an Edo era practice of restricting members of a Ryu from matches outside of their Ryu, also used to refer to Ryu that were sworn to a particular domain or a Ryu that did not permit interaction with the general public.). After doing this I was permitted to become a student.

At the time I was living in Toyama-so, in the Totsuka san-chome area of Takadanobaba, but it was quite far from the dojo in Wakamatsu-cho, so I moved into a place called the Chouseikan (長生館) boarding house in Okubo ni-chome where the artists lived, just 300 meters from the dojo. Everyday after I got out of school I would practice Judo with the Judo club, then go back to the boarding house and then on to the dojo. After Aikido training I would go back to the boarding house in the evening to have dinner and then return to the dojo for more Aikido, and that was my daily life.

At that time my brother, who was also an exchange student in Japan, often scolded me “You put a lot of expense into coming all the way to Japan to study, but you never study – what the hell are you doing?”, but in this case I just retorted “If I can learn Aiki-jutsu then it’s OK!”. I’m a little embarrassed to discuss a personal matter, but I was job hunting after graduating from school in Showa year 15 (1940), and if one was captain of their Judo club almost all of the companies would pass you on their tests. Thanks to that, I received offers of employment from the top ranked companies Mitsui & Co., Ltd. and the Southern Manchurian Railway on the same day – I gave a cry of joy!

Eimeiroku from the Ueshiba Dojo, dated 1926

along with the name of Admiral Isamu Takeshita

3) The Face of the Deshi

I was told that after becoming a student one was recorded in the Monjin-roku. When I opened that Monjin-roku I was astonished. 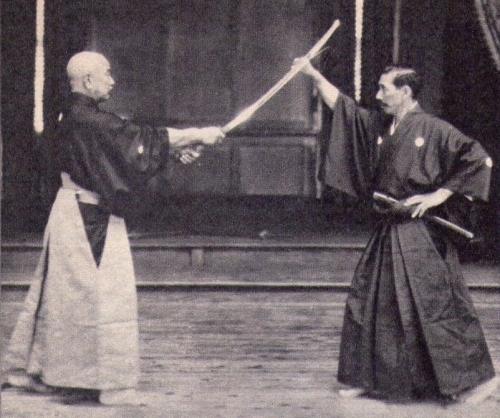 He was the Ken-jutsu shihan of the Metropolitan Police Department. There was something written in an old serial novel published by the Asahi Shimbun – one day this Takano Shihan was put upon by a large number of gamblers on a bridge above the Sumida River. It was said that, facing them with his bare hands, he threw them off the edge of the bridge into the river. 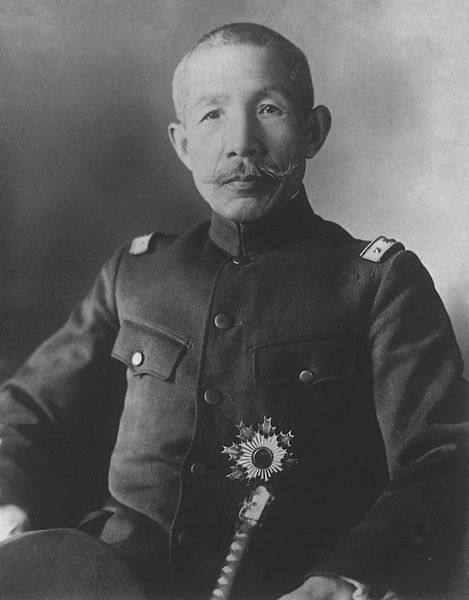 The second name was Sadao Araki (Translator’s Note: 荒木貞夫 – a general in the pre-WWII Imperial Japanese Army, and one of the principal nationalist right-wing political theorists in the Empire of Japan. He served as the Minister of War and then the Minister of Education, and was a member of the pre-war Supreme War Council (軍事参議官会議)).

He was an army general and later became the Minister of Education – as I recall, for a period of time he was a member of the Cabinet. 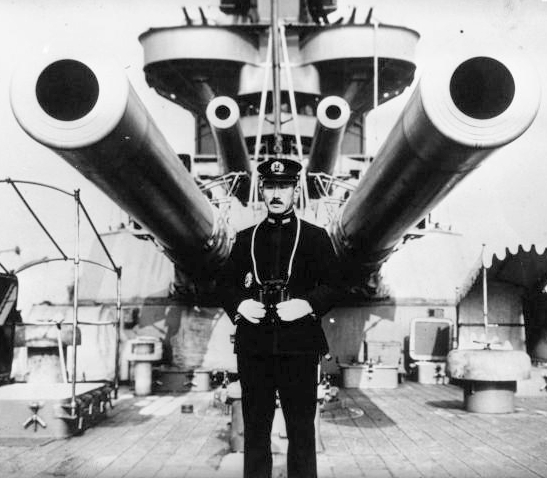 as Commander-in-Chief of the Combined Fleet

The third name was Sankichi Takahashi (Translator’s Note: 高橋三吉 – commander-in-chief of the Combined Fleet of the Imperial Japanese Navy. He was instrumental in crushing the Treaty Faction of the Japanese Naval command that accepted limitations imposed by the Washington Naval Treaty agreed to by Japan after WWI. He was an enthusiastic supporter of Aikido and invited Aikido Founder Morihei Ueshiba to become an instructor at the Naval Staff College where he trained Imperial Japanese Naval officers for some ten years.).

He was a naval admiral who had served as the commander-in-chief of the Combined Fleet of the Imperial Japanese Navy (連合艦隊指令長官). 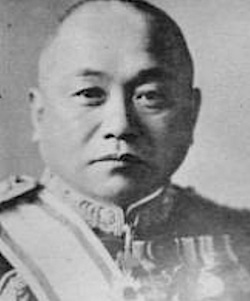 The fourth name was Eisuke Yamamoto (Translator’s Note: 山本英輔 – an admiral and commander-in-chief of the Combined Fleet of the Imperial Japanese Navy. During the February 26th Incident (二・二六事件), an attempted coup d’état organized by a group of young Imperial Japanese Army officers attempting to install a military-centered cabinet, he was part of a failed compromise solution to form a new cabinet under his supervision.).

He was a also naval admiral who had served as the commander-in-chief of the Combined Fleet of the Imperial Japanese Navy.

That is to say, it was all top class people, compared to them I was nothing, a student – but as I said before I added my name while filled with embarrassment. I don’t think that there are other dojo anywhere that restrict membership like that. I think that is part of the tale of Ueshiba Sensei’s fastidiousness.

B – My Brother Students

About fifty years old and an executive at Kewpie Mayonnaise, every day we would hear the sound of his wooden geta as he walked to the dojo from Nakano in his kimono. He didn’t look very strong, and sometimes we’d try arm wrestling, but at those times I’d be defeated easily. Then he’d always scold me, hitting my shoulders and saying “Kimura-san, you’re putting power into your shoulders again, please relax.”, but in the end I just couldn’t relax.

In his thirties and working for the Japan Railways at Shinagawa Station. This person said that Sensei told him that he would split the dojo with him and always trained as hard as he could. (Translator’s Note: this may be Hitoshi Ito / 伊藤等) 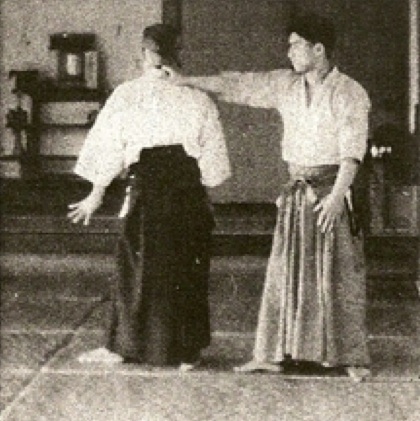 A student at Takushoku University (拓殖大学), throughout the year he’d spend all of his time in the dojo, and even eat his meals with Sensei’s family in a room in the back. He was Sensei’s favorite pupil, and went with him wherever he went as Sensei’s O-tomo (“attendant”). He was the only one who could remain comfortable, no matter how far Sensei threw him. His grip was incredibly strong, it was called the “Takudai Punch” (Translator’s Note: “Takudai” is short for “Takushoku University”). You couldn’t move when Shioda-san grabbed you.

Now he has opened a dojo in Koganei City and is protecting Ueshiba Sensei’s teaching, spreading and promoting Aikido. 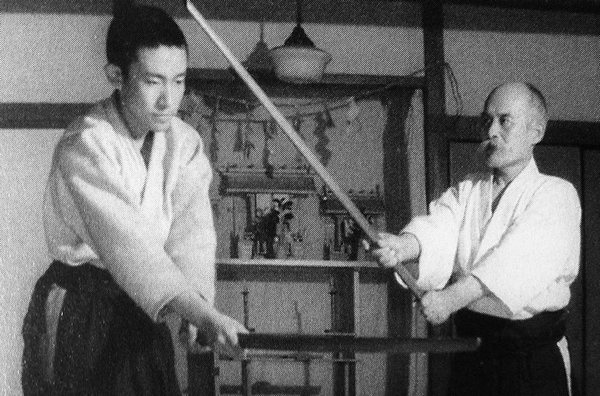 Ueshiba Sensei’s son, at that time he was in the third year of junior high school. I remember working on Kokyu Undo with him. 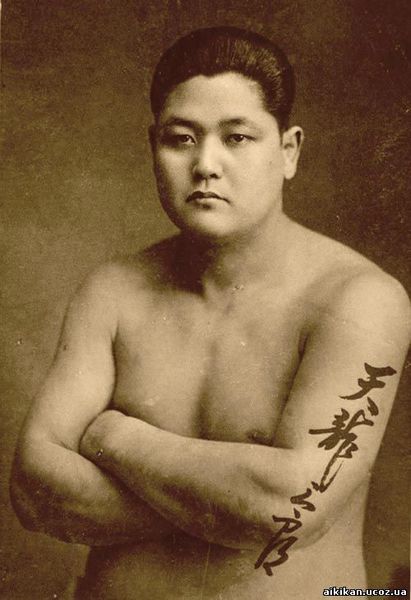 Outside of that there was Saburo Wakuta-san (Translator’s Note: 和久田三郎 – the real name of the Sumo wrestler Saburo Tenryu / 天竜三郎, who became a student of Aikido Founder Morihei Ueshiba after encountering him in Manchuria.). This person was the Director of Physical Education for Manchukuo (Translator’s Note: the name of the Japanese puppet nation established in pre-WWII Manchuria) and had come to visit Ueshiba Dojo in order to master Aikido – he was the Sumo wrestler Tenryu Ozeki-san. He was very large, and during the breaks Shioda-san would lie down next to him and rest his head on his abdomen.