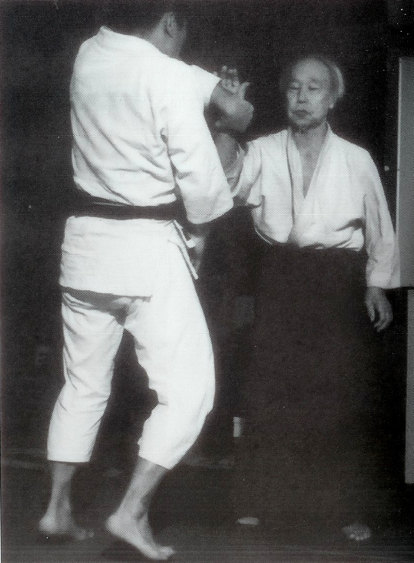 Masaru Takahashi (高橋賢), one of the senior surviving students of the famous Daito-ryu instructor Yukiyoshi Sagawa, entered Sagawa Dojo on May 5th of Showa year 47 (1972). 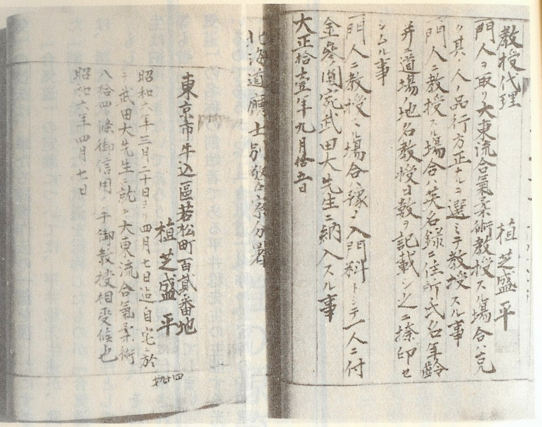 Yukiyoshi Sagawa (佐川幸義) was one of the senior students of Sokaku Takeda, Morihei Ueshiba O-Sensei’s instructor in Daito-ryu, and was actually designated as the successor to Takeda at one point in time. He began studying Daito-ryu under Takeda Sokaku after first learning the art from his father, Nenokichi Sagawa (佐川子之吉 1867–1950), who was a student and ardent supporter of Takeda, as well as a holder of a Kyoju Dairi (assistant instructor’s licence) in Daito-ryu – the same license that Morihei Ueshiba himself received from Sokaku Takeda. Yukiyoshi Sagawa received his own Kyoju Dairi certification in 1932.

Takahashi Sensei instructs at the Sagawa-den Daito-ryu Aiki Budo Sagamihara branch dojo (佐川伝大東流合氣武道相模原支部), at the Daito-ryu Sagawa Dojo hombu (大東流佐川道場本部) in Kodaira city, and has published a number of books and articles researching the Japanese martial arts and Daito-ryu.

This article is an excerpt from his book “The Truth of Daito-ryu Aiki” (大東流合気の真実), which was published in Japanese by Fukushodo Co. Ltd.(http://fukushodo.com/) in September 2007.

Another excerpt from this book appears in “Sagawa Yukiyoshi, Masaru Takahashi and Breath Training in Daito-ryu“. 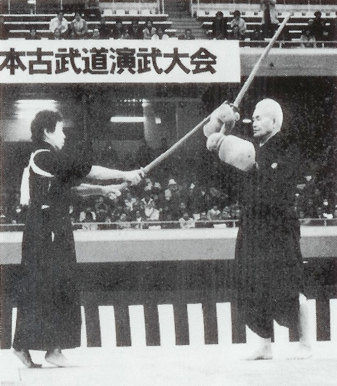 What is “Aiki”? Recently there has been an explosion of strange, odd, and even false explanations of Aiki.

For example, there is a person who gives the explanation “Aiki is Love”.

If that is true, then I wonder if Aiki is “religion”?

Then, there are some who say something like “Aiki is shin-ki-ryoku-ichi” (心気力一致 / “mind, spirit, and body in accord”).

“The sword is shin-ki-ryoku-ichi” is something said by Chiba Shusaku (千葉周作 / 1794-1855) in Hokushin Itto-ryu Kenjutsu (北辰一刀流剣術) during the Edo period.

I wonder if Aiki is the same as Hokushin Itto-ryu Kenjutsu?

There was also a person who defined Aiki as “striking and joint locking techniques”.

The striking and joint locking techniques that were the specialty of Koryu Jujutsu (古流柔術 / “the old schools of jujutsu”) were eliminated from the randori practice in the curriculum of Kodokan Judo because they were considered to be too dangerous.

Is Aiki, then, the same as Koryu Jujutsu?

Further, there is an author who gave the explanation that “Aiki is strength, and the receiving of strength”.

This author said that Aiki “is to split the opponent’s strength into two halves and then balance those forces, accordingly, Aiki alone cannot become Bujutsu”. If we are to accept the reasoning of this author, then the secret Daito-ryu technique of “Aiki-nage”, which throws the opponent down through Aiki alone, could not exist.

This kind of dubious reasoning just displays to the world the fact that they have never seen, heard or experienced Aiki.

Even worse than this is the appearance of a person asserting that “Aiki is hypnosis, self-suggestion, something that is applied to your own subconscious. Aiki is not a physical method, it is a psychological method.”. They explain that “if Aiki is a physical method, then simply by imitating the physical movements of the instructor than anybody will become able to apply Aiki”.

The layperson who knows nothing of Aiki naturally ends up nodding along with these strange, odd explanations, and calls it “Aiki training”. Subject to self-suggestion by the instructor, they are taught to throw themselves through conditioned reflexes.

When those “Aiki instructors” attempt so support these strange, odd and false explanations, their own “Aiki” actually turns out to be a fake brought about by self-suggestion, and they themselves display the fact that Aiki cannot be accomplished through physical manipulation.

Human beings differ individually in their physical makeup and strength, if you are a Budo Shugyosha than there are various ways of cultivating power. Beyond that, the opponent is not a “robot with set specifications”, but “the living body of a human being”. I can only think that to ignore this fact and state “if Aiki is a physical method, then simply by imitating the physical movements of the instructor than anybody will become able to apply Aiki” is the statement of a person who has no knowledge of Bujutsu. Even if a woman without physical strength or a child imitates the outer form of the Shihan’s movements exactly, there is no way that they will be able to demonstrate the same expertise as the Shihan. 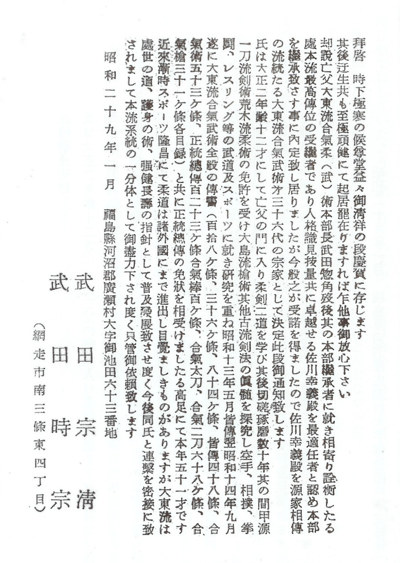 Postcard from the Takeda family announcing the appointment
of Yukiyoshi Sagawa as the 36th Soke of Daito-ryu
January, Showa year 29 (1954)

Aiki was first spread to the world by Takeda Sokaku Senshi, and that secret was carried on by Sagawa Sensei alone, who developed that Aiki into an even higher dimension of technical skill. “Apply Aiki” in order to topple the enemy was a secret skill of Takeda Senshi’s teachings. Only (Sagawa) Sensei took those teachings as a foundation and explained the mystery of Aiki clearly for the first time – “Aiki is to make the power of the enemy into nothing” (合気とは敵の力を無にすること).

After the war, due to his “elucidation of Aiki”, his “inheritance of Aiki”, and together with his “outstanding qualifications”, Sagawa Yukiyoshi Sensei received the support of the Daito-ryu family as the 36th Soke.

The “Aiki-no-jutsu” (合気之術) inherited by (Sagawa) Sensei from Takeda Senshi has no connection to the strange, odd and false explanations noted previously. 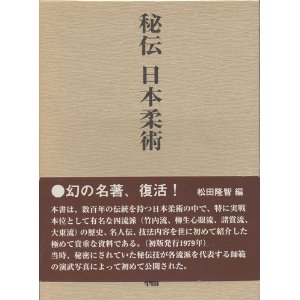 Aiki-no-jutsu (technical method) is the foundation of Daito-ryu Aiki-jujutsu and cannot be ignored – it would not be too much to say that it comprises the bulk of that art.

That is, when our body is grabbed or pushed, or various techniques are applied to us, we instantly intercept the power of the enemy through Aiki-no-jutsu, render it powerless, stick to it and make it impossible to separate, and apply throwing, reversal or joint locking techniques.

When the enemy comes to strike us we stop that movement, reverse it, or execute throwing techniques or reversals after floating and destabilizing them through the action of Aiki-no-jutsu .

Even when they move before us, after destabilizing the enemy and rendering them powerless through the principles of Aiki we attack them. This is the unique Aiki-no-jutsu technical method of this art.

Simply stated, in Daito-ryu Aiki-jujutsu there are 2,884 techniques which give birth in turn to an endless number of variations. Each and every one of them employ the action of the Aiki-no-jutsu technical method.

SImply clamping down on joint locks or relying on physical strength to twist and turn without the action of Aiki-no-jutsu is not Daito-ryu Aiki-jujutsu, that is Daito-ryu Jujutsu.

We students must understand the meaning of this well and dedicate our efforts to the training of Aiki-no-jutsu (technical method).

As stated here, “Aiki” is the Gokui (極意 / “secret”) of Takeda Senshi’s Daito-ryu, and “Aiki-no-jutsu” can be said to be the technical method at its heart. Be that as it may, most of the students of Takeda Senshi were ignorant of Aiki, which is the reason behind the birth of the current strange, odd and false explanations.

There are a number of people other than Takeda Senshi who have claimed to be the godparent of “Aiki”. For example, according to Takeda Senshi’s student Morihei Ueshiba Shihan the word “Aiki” was first used in Taisho year 11 (1922), but this is no more than a falsehood.

Sagawa Sensei began training in Budo before he was 10 years old, and from the time that he first met Takeda Senshi in Taisho year 1 (1912) he would often hear him speak the word “Aiki”. The word “Aiki” as a technical term in Budo was unfamiliar to the young Sagawa, so he made particular note of its usage. 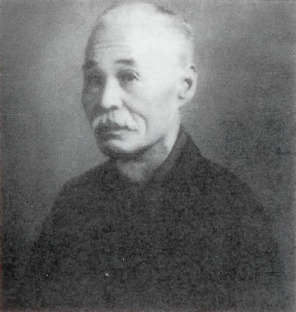 Further, the notes taken by (Sagawa) Sensei’s father, Nenokichi Sagawa Sensei (佐川子之吉), from the workshop at which he was taught Yonkajo (四ヶ条) by Takeda Senshi in Taisho year 2 (1913) have survived to this day. In those notes “Apply Aiki” (合気をかける) can be seen written in the corner. This memo, which can said to be absolute material evidence, was confirmed by Stanley Pranin, the editor of “Aiki News” (now “Do” magazine), when he visited Sagawa Sensei while gathering materials on Aiki.

Through this memo we can understand that “Aiki” was not a name created by his students, but something that Takeda Senshi was already using from around the end of the Meiji era.

5 thoughts on “Strange, Odd and False Theories of "Aiki"”